NVIDIA has just released its newest GeForce: RTX 3070 Ti. Compared to the non-Ti variant, the new RTX 3070 Ti offers some extra cores, and faster GDDR6X memory to deliver a healthy bandwidth boost. For this launch, we’re going to look at 4K and ultrawide gaming performance across all of AMD’s and NVIDIA’s current-gen cards.

During the virtually-held Computex earlier this month, NVIDIA announced both its sixth and seventh Ampere-based GeForces: RTX 3080 Ti, and RTX 3070 Ti. We took a look at the RTX 3080 Ti last week with a gaming focus, albeit one focused explicitly on 4K resolution. That article also included benchmark results from the RTX 2080 Ti and GTX 1080 Ti for the sake of seeing generational improvements, so we’d encourage you to peek back at it in case that interests you.

With the RTX 3070 Ti now launched, we’re dropping the 2080 Ti and 1080 Ti from our tested collection here, but have added the ultrawide resolution of 3440×1440 to beefen up the results overall. We hoped to get ultrawide in last week’s article, but alas, this is how things go sometimes.

If you’re interested in creator performance with these new NVIDIA cards, please stay tuned, as we’ll have an article to post in the coming days that will take care of that. From the get-go, we’re going to focus on rendering, using Blender, Octane, Redshift, Arnold, V-Ray, and KeyShot. With AMD having just launched a new Radeon Pro card, we’ll follow-up with a broader performance article in the near-future.

Suggested retail prices matter only to those who manage to defy the odds and secure a purchase at that price, which unfortunately isn’t standard fare right now. NVIDIA is launching this $599 SRP RTX 3070 Ti at a time when the $329 SRP RTX 3060 is being found on eBay regularly for triple its intended price.

Assuming SRP held in tact, then the RTX 3070 Ti commands a $100 premium over the non-Ti variant, and the benchmark results below should highlight whether or not that premium is justified. Like the RTX 3080 Ti to come before it, the new RTX 3070 Ti has a cryptocurrency mining limiter built-in, something that will hopefully make sure these cards find their way into more gamer hands than miner hands.

As we covered in our RTX 3080 Ti review last week, all Ampere cards sport the latest generation RT and Tensor cores for accelerated ray tracing and deep-learning, and support the suite of NVIDIA features, such as Broadcast, which has become a tool I basically never close since it proves so useful in cleaning up my microphone audio. On the ray tracing front, NVIDIA still reigns supreme overall, thanks to having an entire generation worth of experience over AMD. That leads us to believe one thing: the next generation of GPUs from both vendors could be really, really interesting.

There’s not too much else to talk about here that isn’t already obvious, so let’s jump into the testing methodology and considerations, and then get into the heart of the article: benchmark results!

This article includes testing with nine standard (non-RT) games at 4K and ultrawide (3440×1440). We’re still planning to take a deep look at ray tracing and DLSS titles soon, but first need to knock out our creator performance article for the new cards (and current AMD/NVIDIA lineups in general).

Note: You can download all of the tested setting images at once here (ZIP, 9.6MB). 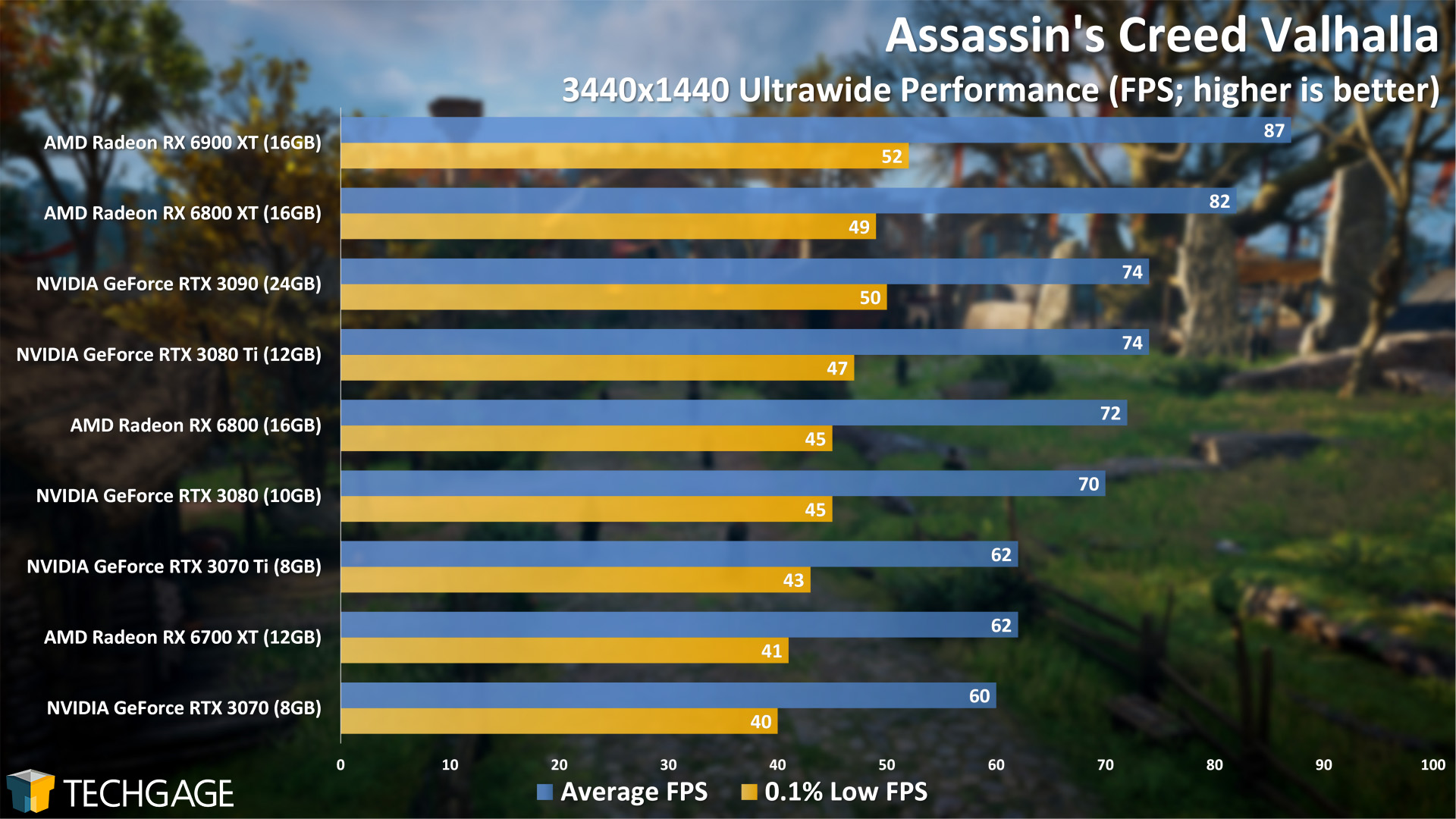 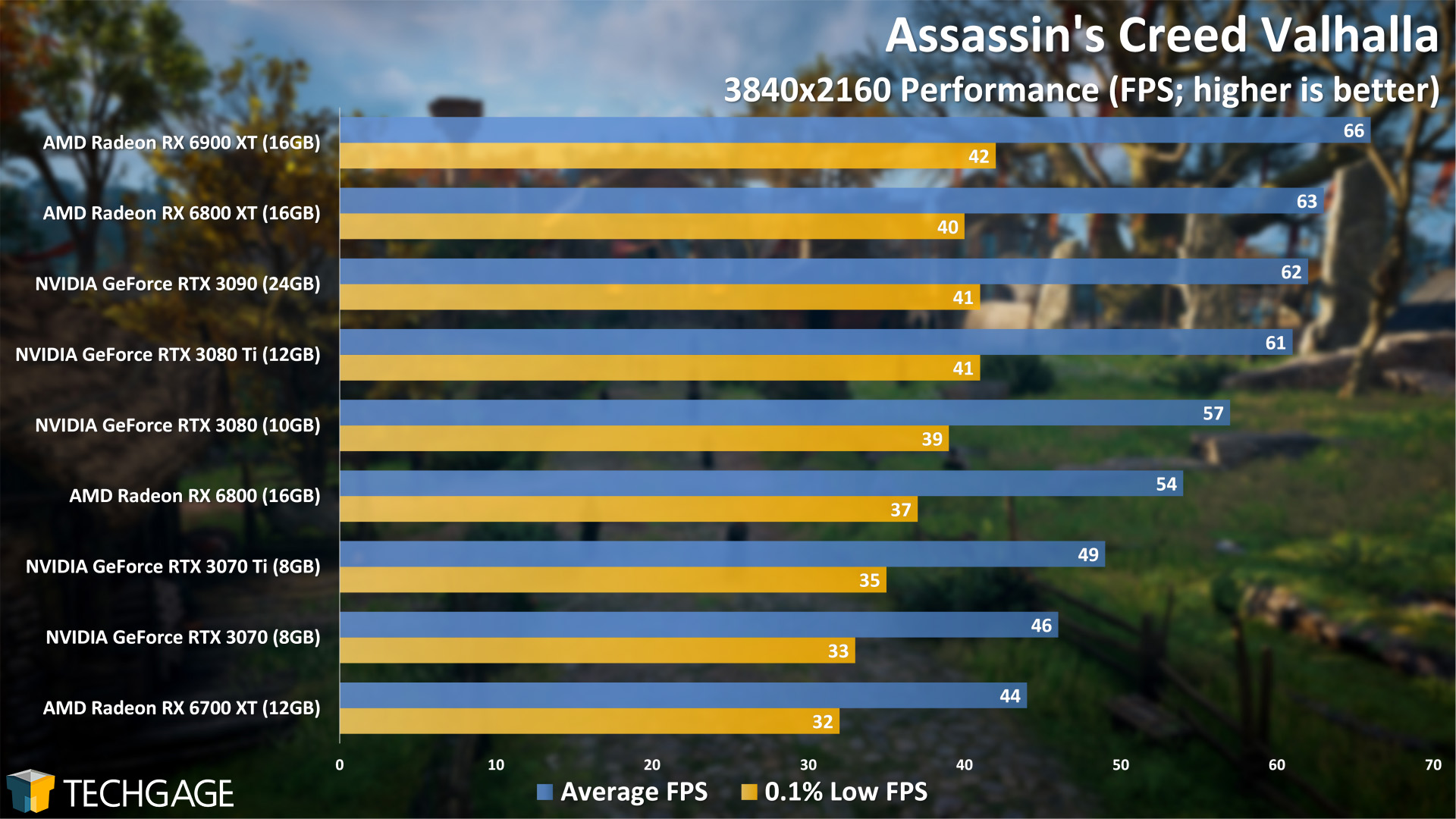 Since we’ve already dived into the 3080 Ti’s performance last week, the most notable comparison throughout this review is going to be between the 3070 and 3070 Ti. Just how much higher will it go with that faster memory and some extra cores? With Valhalla, we’re off to a tepid start, with a difference of only 2 or 3 FPS to the average at either of these resolutions. 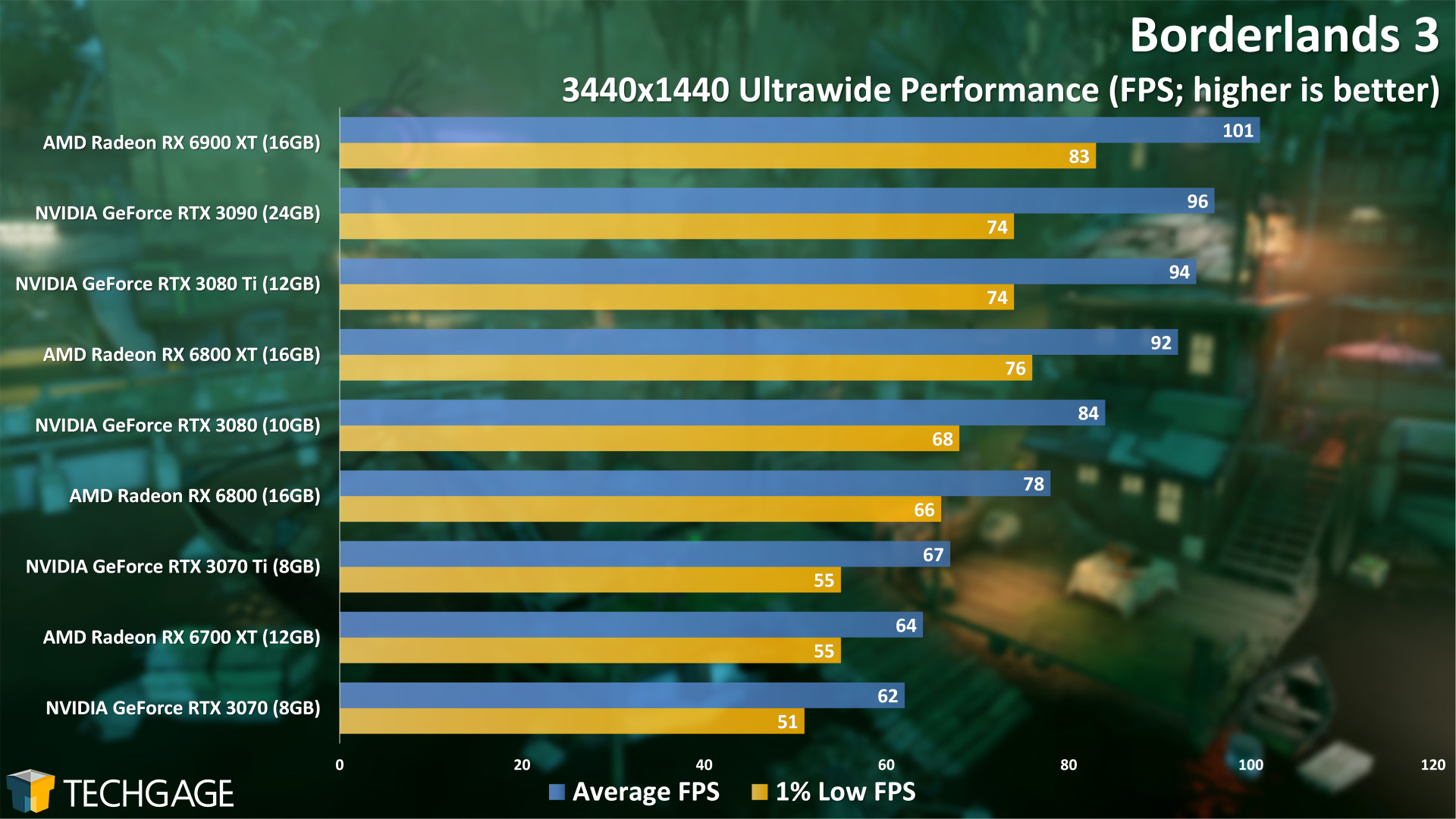 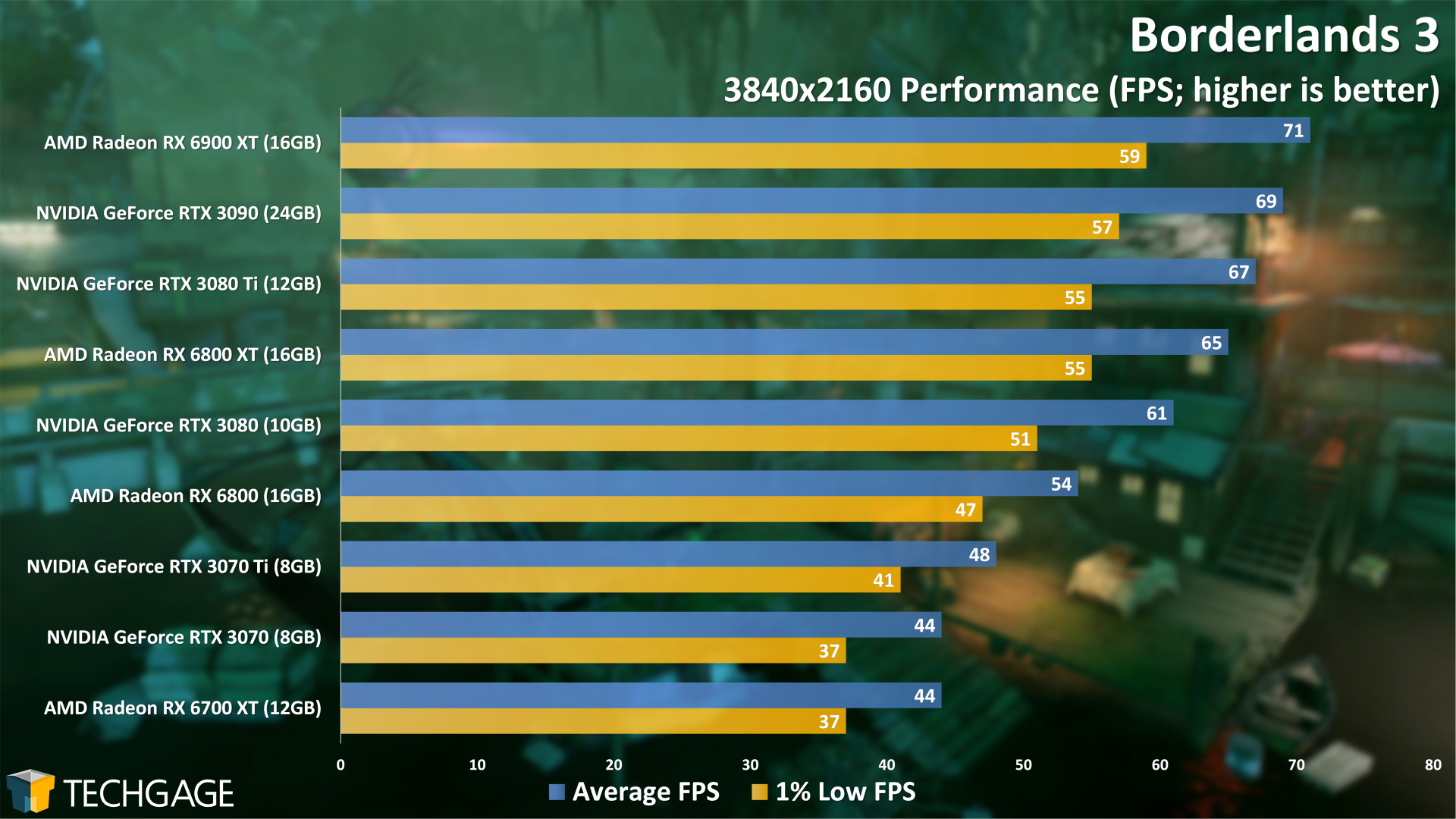 While Valhalla didn’t let the 3070 Ti strut its stuff as well as we would have liked, we’re seeing greater improvements in Borderlands 3, with the ultrawide resolution adding 5 FPS to the average, over the RTX 3070. That’s not quite as impressive as the 10 FPS the RTX 3080 Ti gained over the non-Ti, but it still manages to fill a gap. 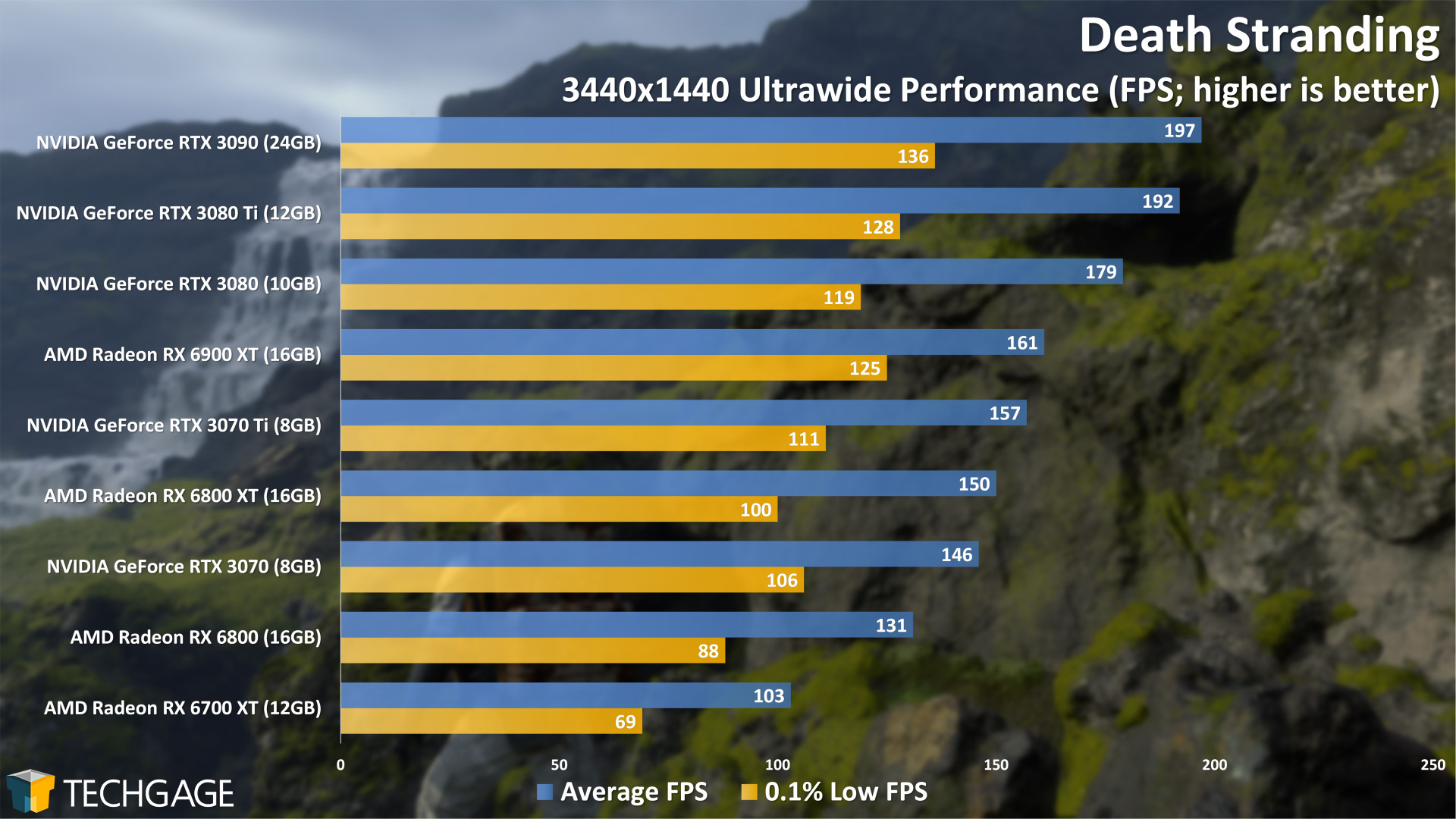 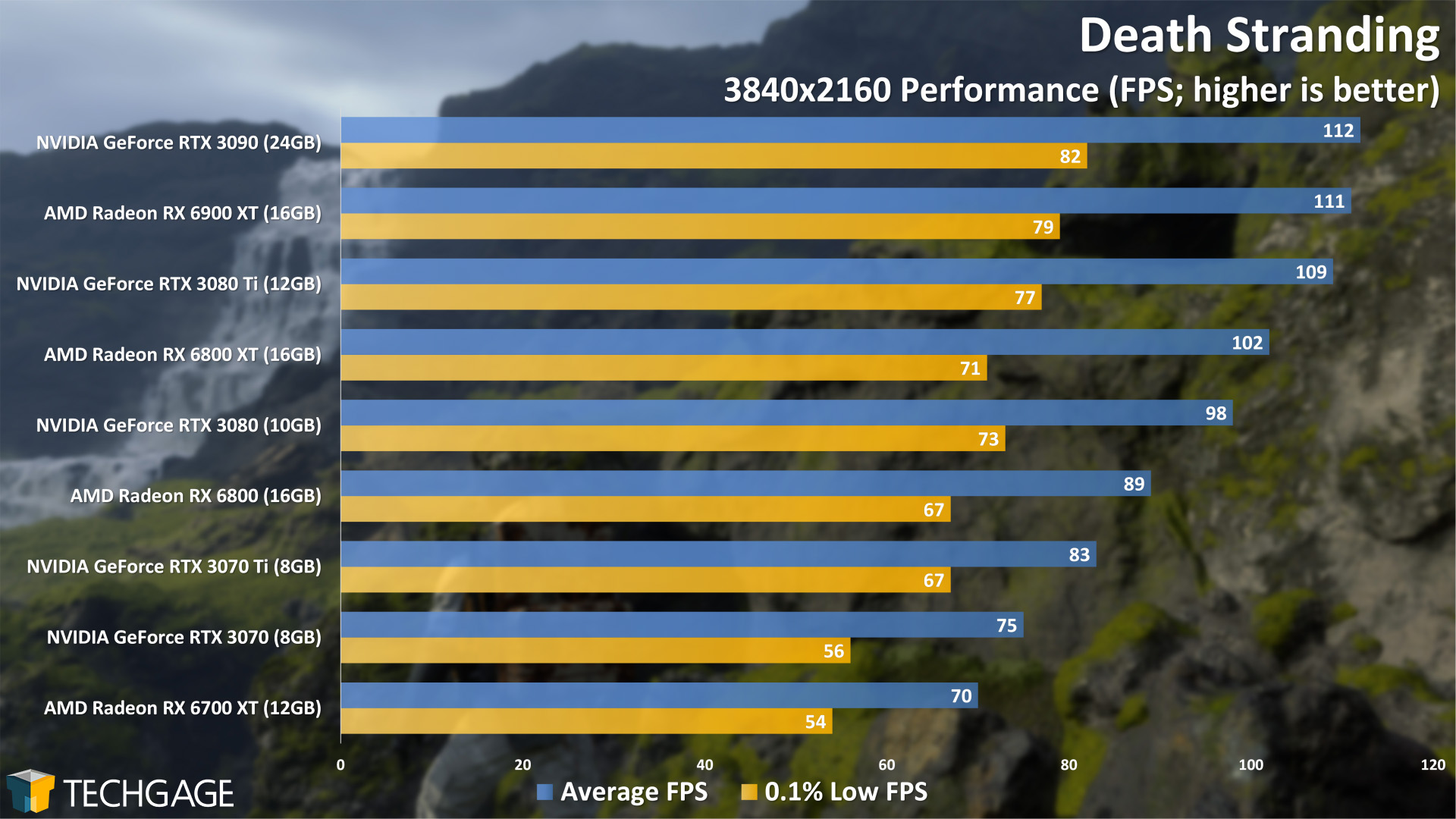 We’re only on our third game title here, and so far, each has improved the performance deltas between the 3070 Ti and non-Ti better than the last. Here, at ultrawide, we see Death Stranding gain 11 FPS with the 3070 Ti over non-Ti, and even see a hearty 8 FPS gain at 4K. This game does well to highlight just how well it can run on more modest hardware, as even the lowest-end GPUs in this lineup run the game really well. The top-end cards scrape against 200 average FPS with the ultrawide resolution. 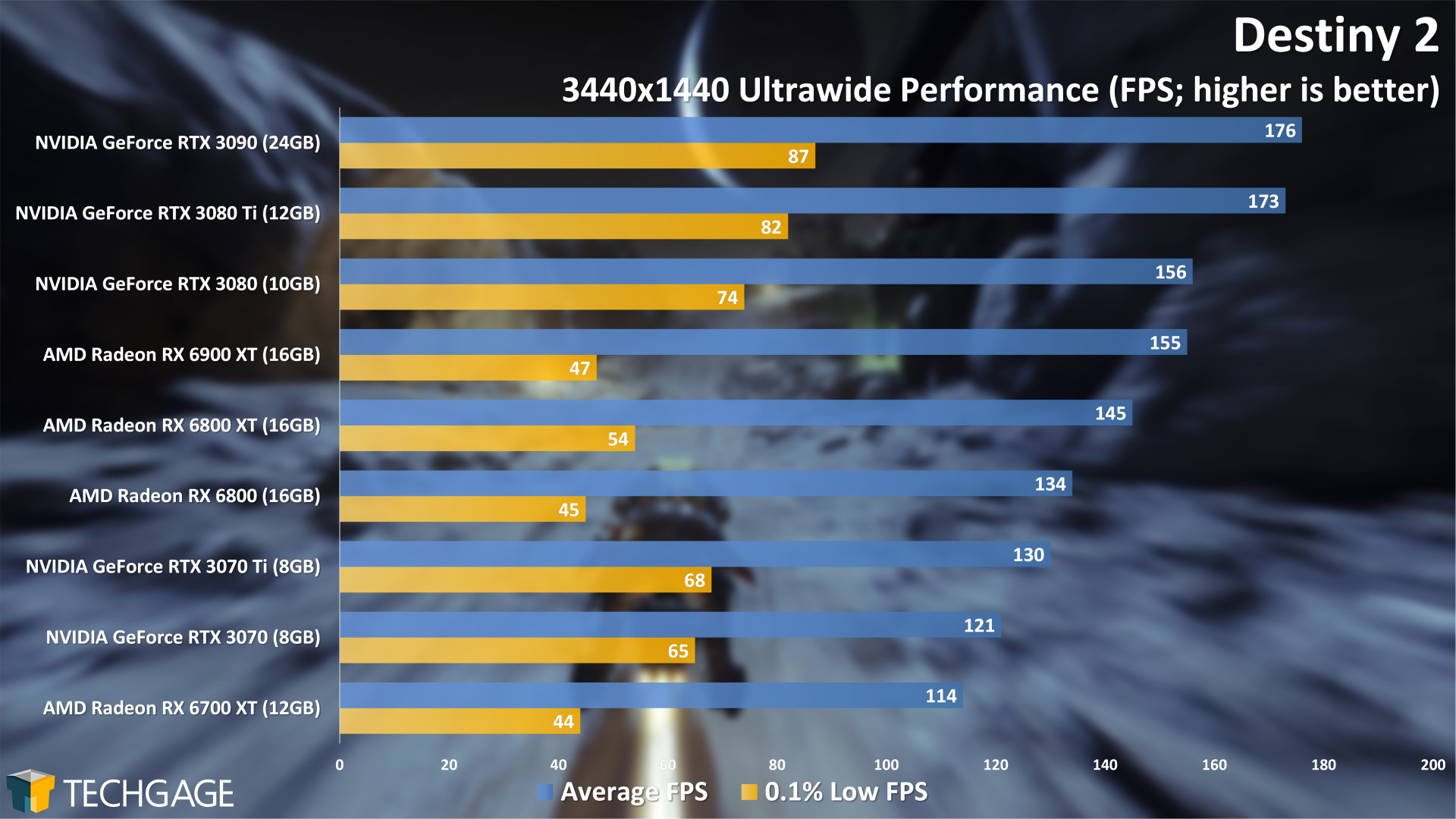 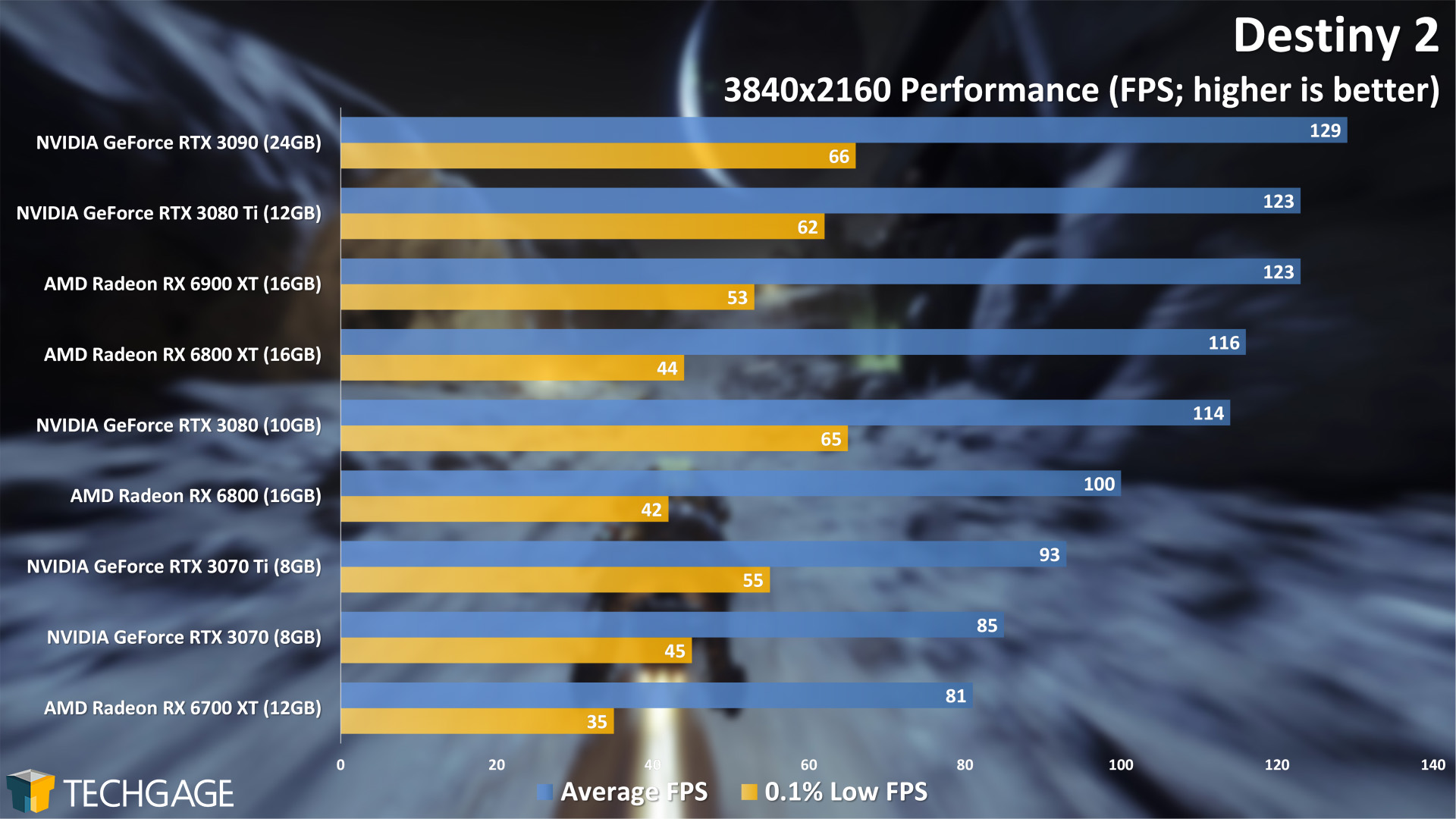 The more we benchmark Destiny 2, the more annoyed we get by the fact that the game’s performance isn’t very polished. On the average FPS front, what’s delivered is extremely good, but when you look at the percentile lows, they are notably worse than in most other games. Sometimes, we can’t really tell that percentile lows are bad even with hands-on testing, just because of how subtle the drop is. With Destiny 2, the problem is more defined, and sadly impacts Radeon worse than GeForce.

Nonetheless, the 3070 Ti again delivers a good performance advantage over the RTX 3070, although an extra 8 FPS would be a little more notable in games that don’t pretty easily exceed 100 FPS on mid-range GPUs at 4K. Still, we’re not about to balk at gains too much. 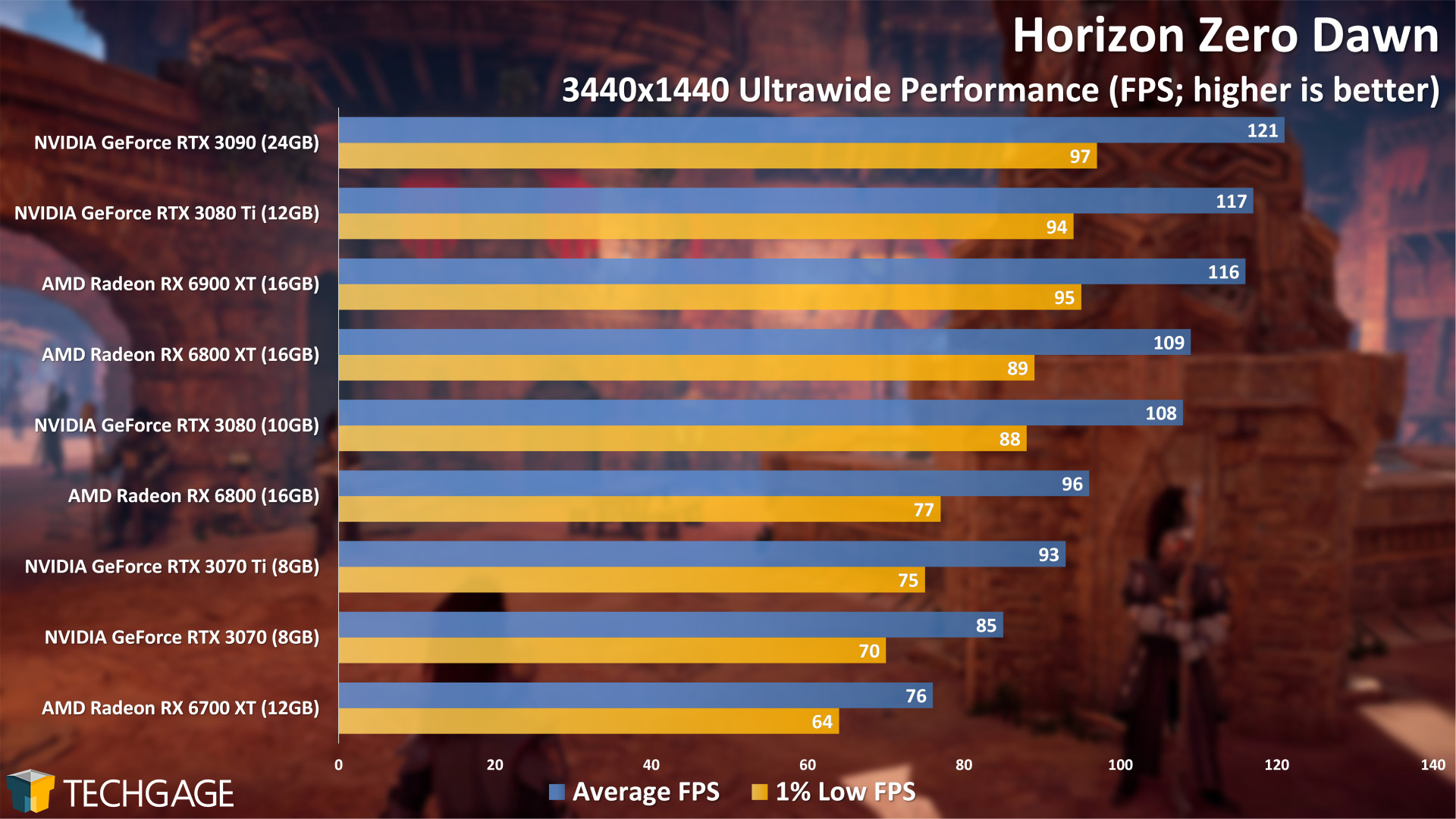 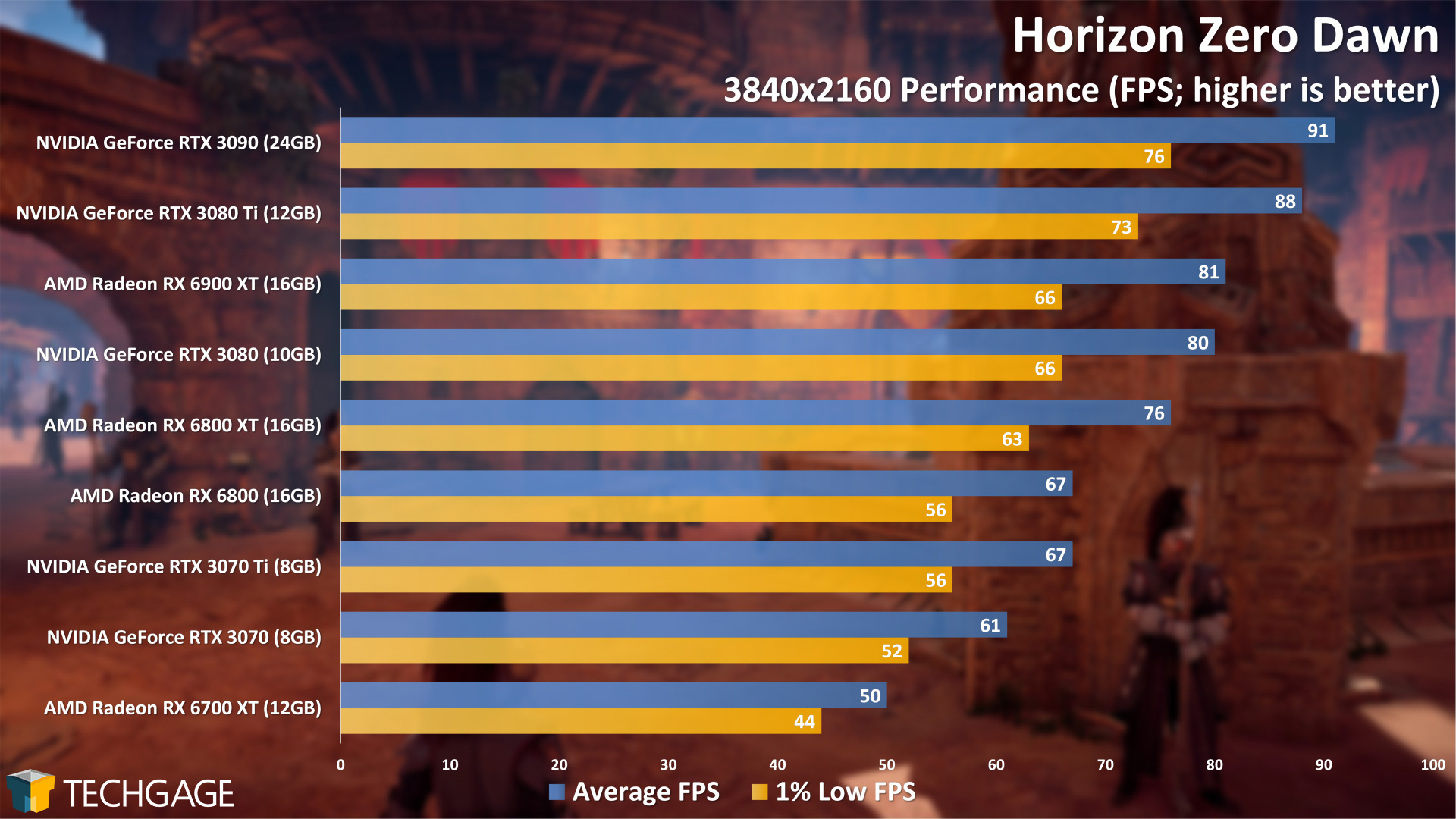 With Horizon Zero Dawn, we’re again seeing pretty healthy gains in performance with the RTX 3070 Ti, but whether or not those gains are enough to warrant a $100 price premium, that’s really for you to decide. 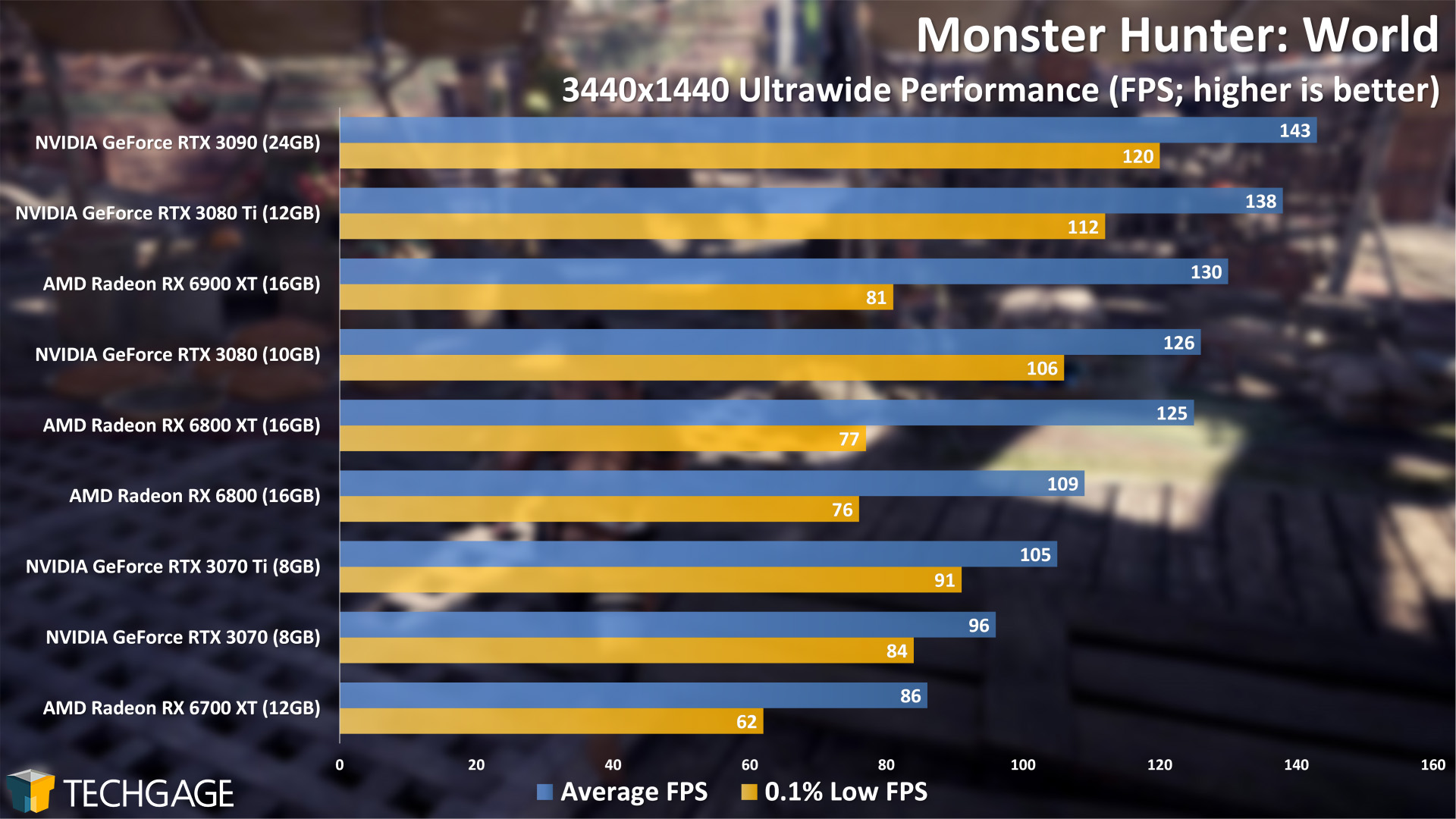 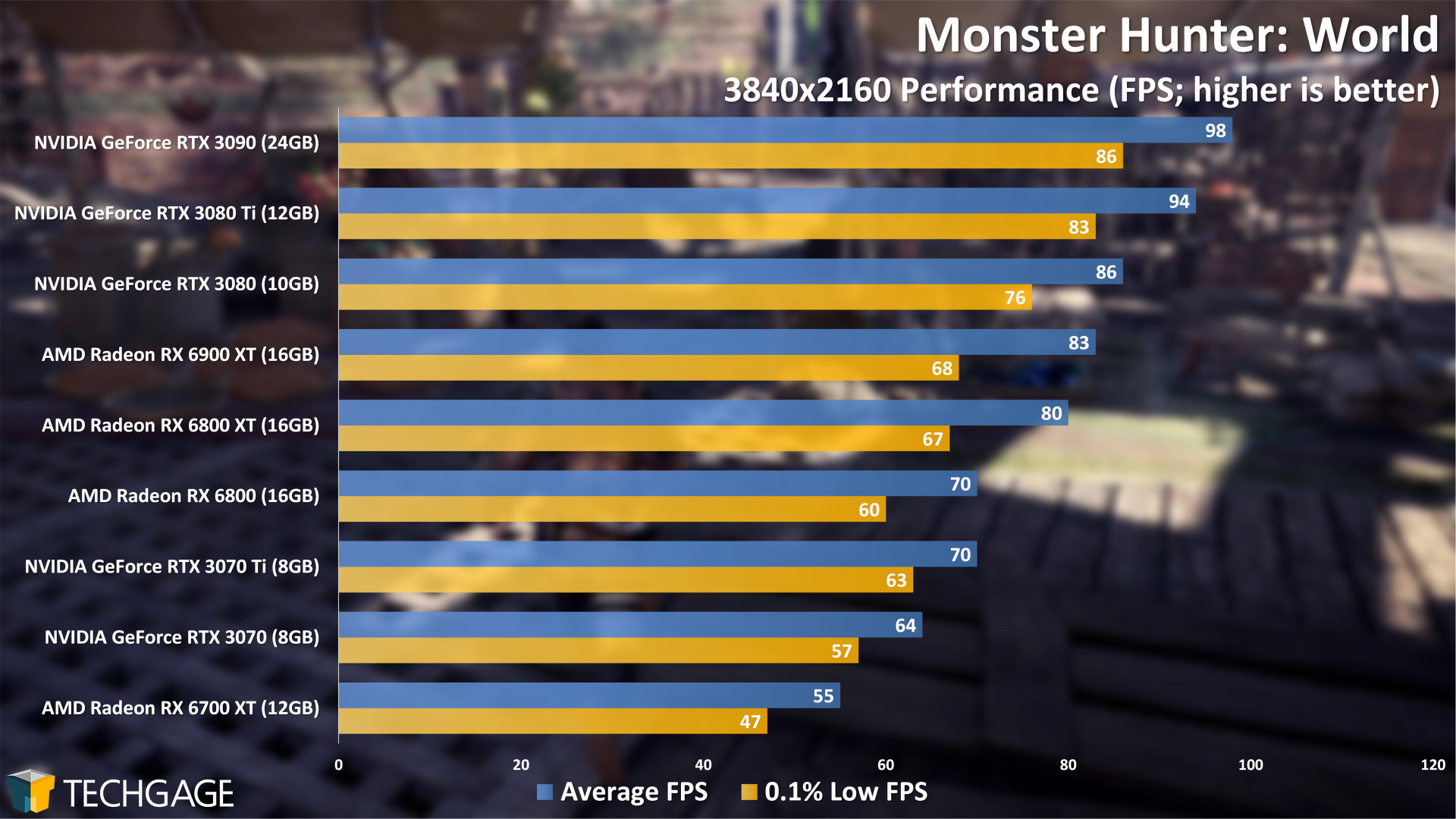 As we mentioned with Destiny 2 above, Monster Hunter: World suffers more on the percentile low front than most other games, again something that plagues Radeon GPUs more than GeForces (but that is not as noticeable in motion like it is with Destiny 2) 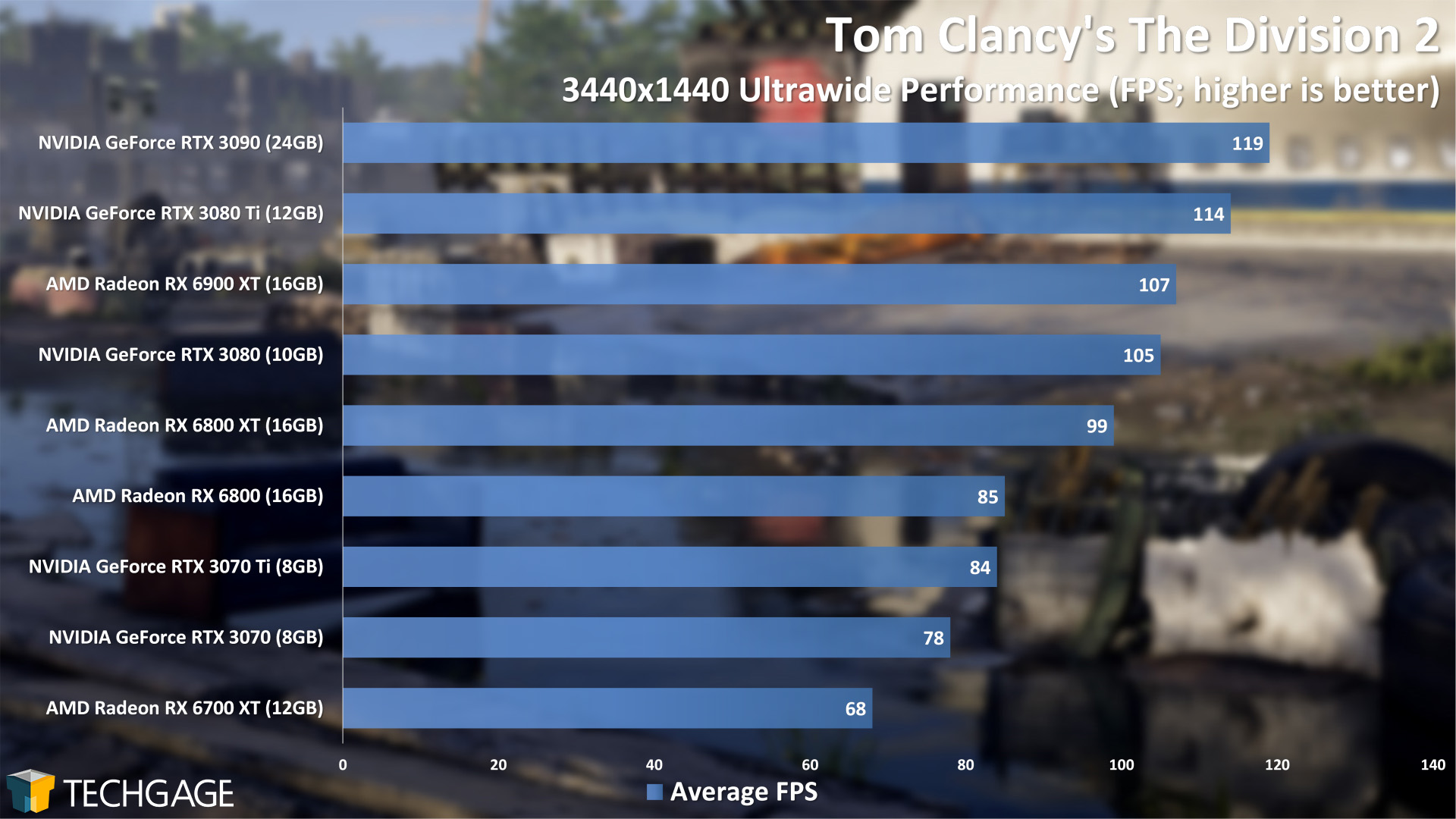 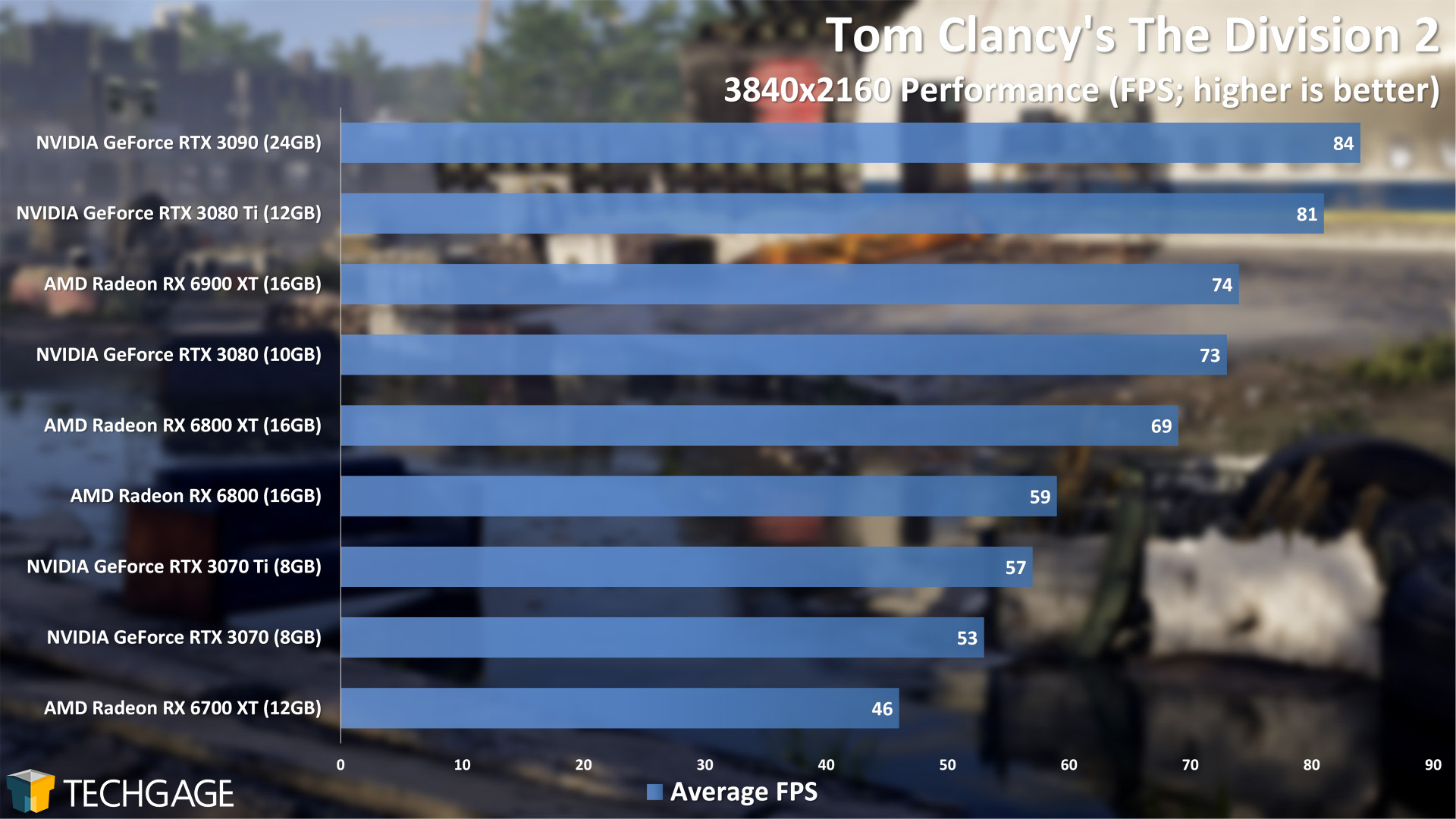 We’re back to seeing really modest gains with the 3070 Ti over non-Ti, with the biggest bump being a 6 FPS improvement at ultrawide. This is the kind of game that feels really great at high FPS, so if you need to hit 100 FPS or higher, you can go through the settings and tweak to your heart’s content (just expect an almost overwhelming number of settings to look over.) 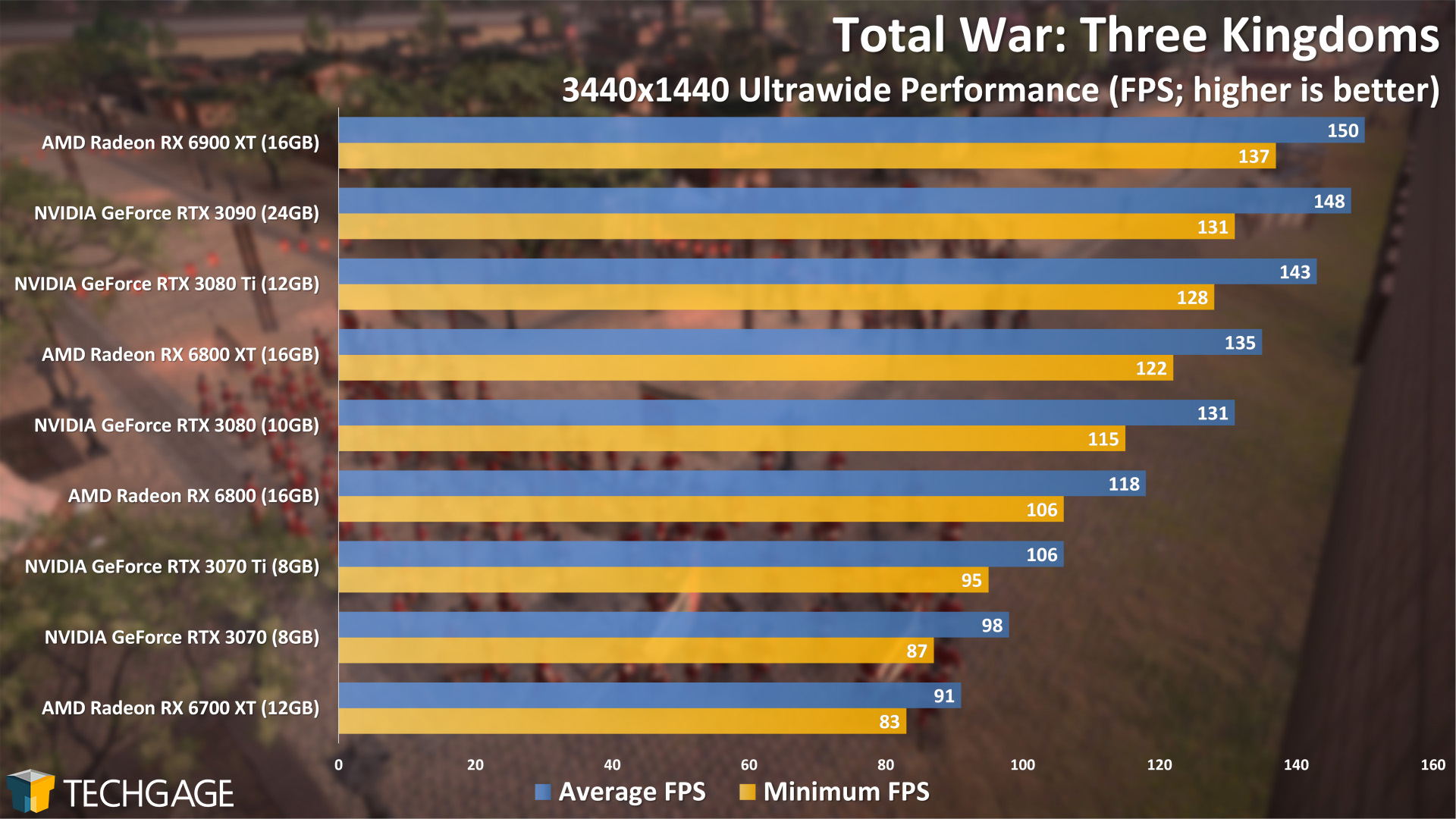 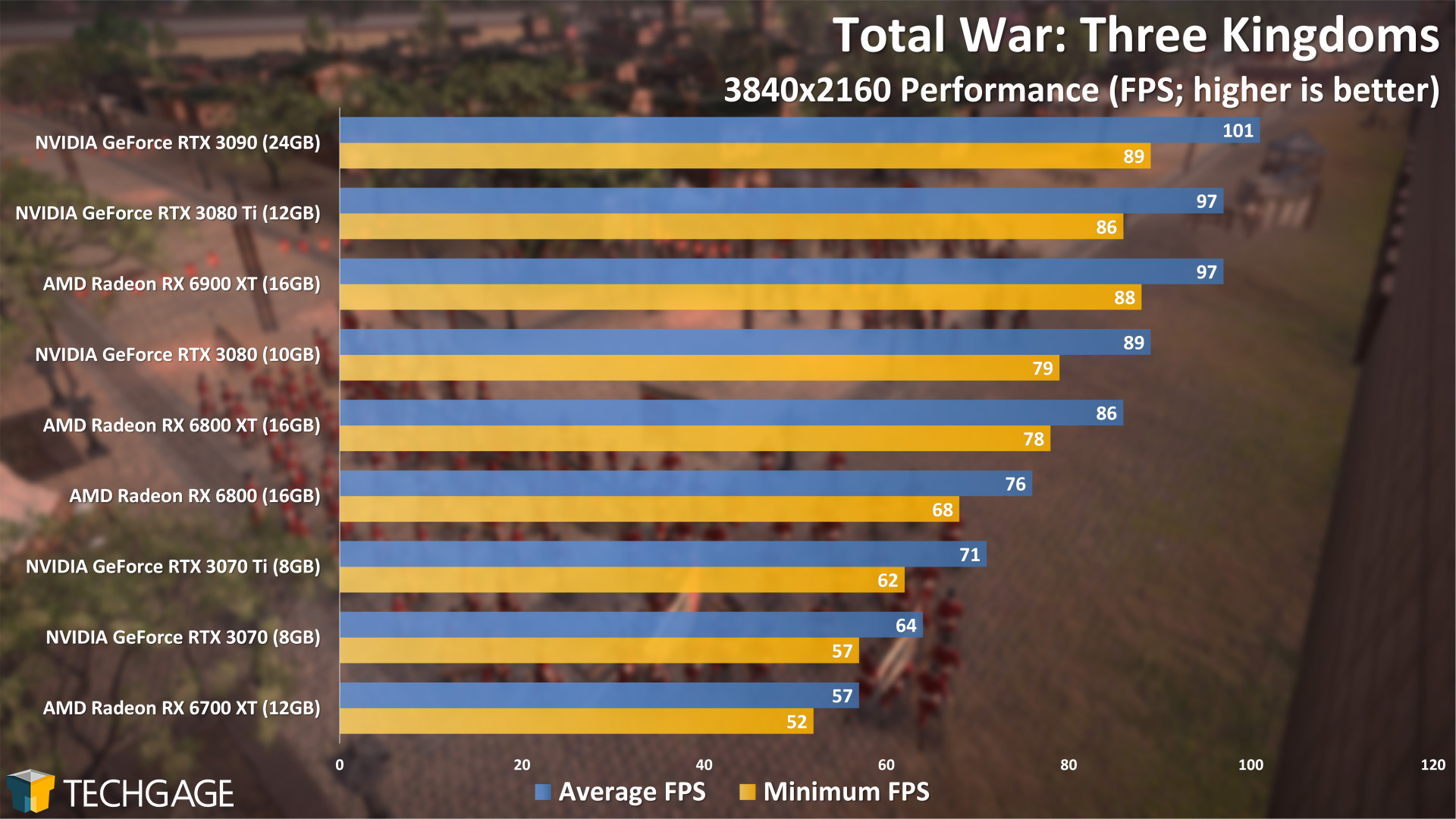 With Three Kingdoms, we’re seeing some of the biggest gains with RTX 3070 Ti over RTX 3070, although again, whether or not those gains are worth the price premium is up to you. That said, 7 FPS gain at 4K, an effective 11% improvement, is definitely notable enough. 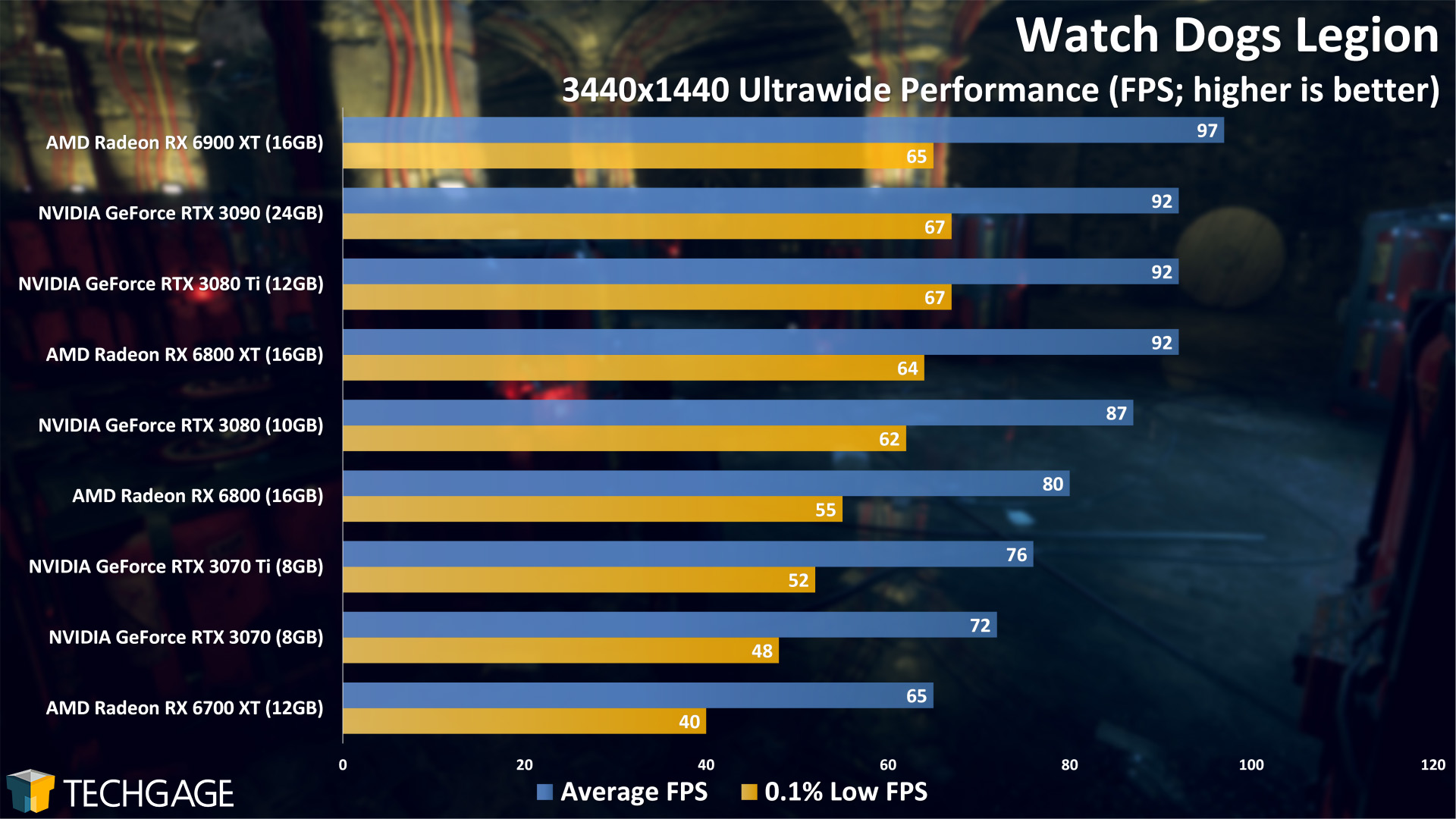 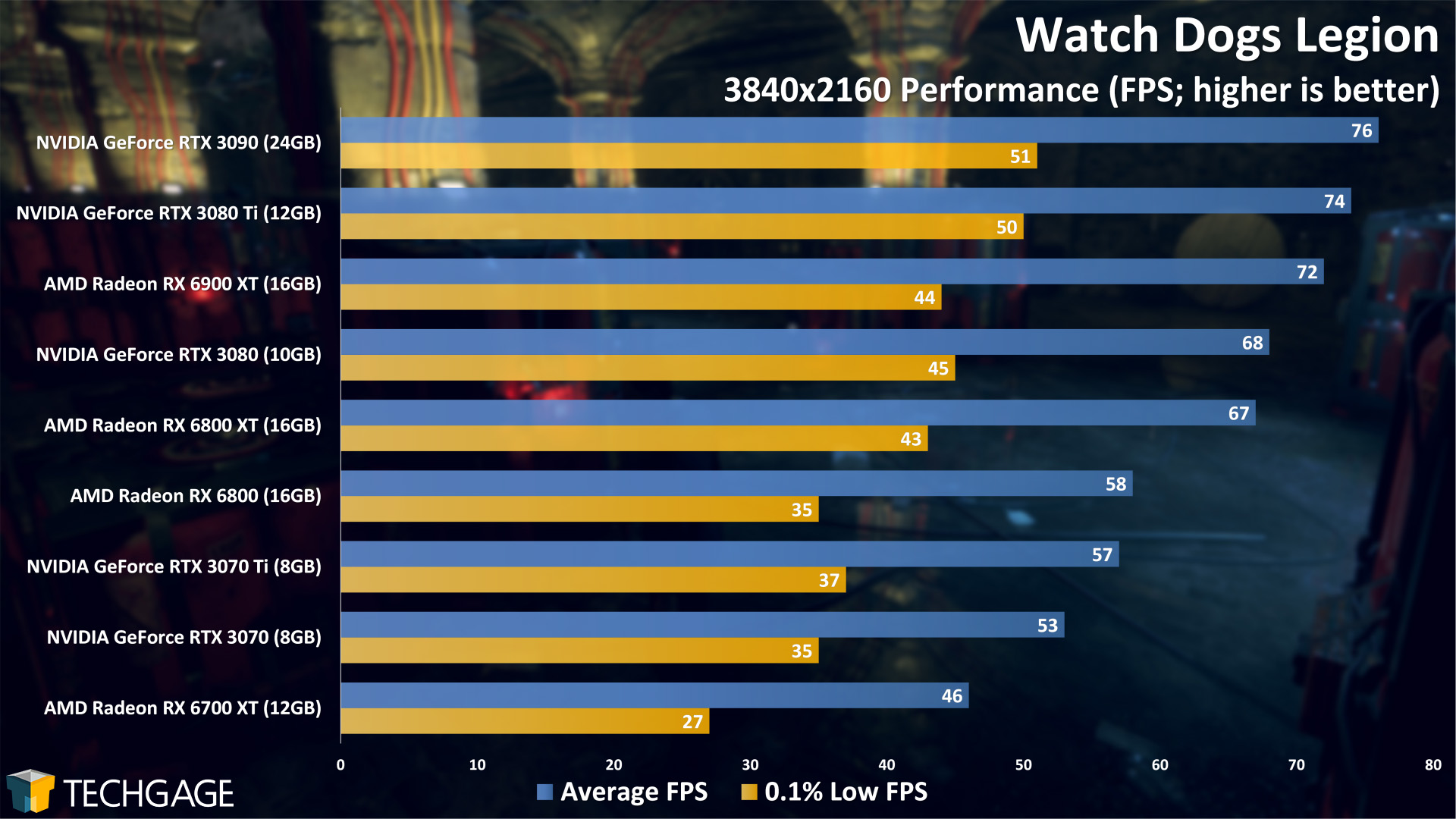 To wrap up our performance look at standard games, Legion shows the RTX 3070 Ti to be better than the RTX 3070 by 4 FPS at both resolutions. 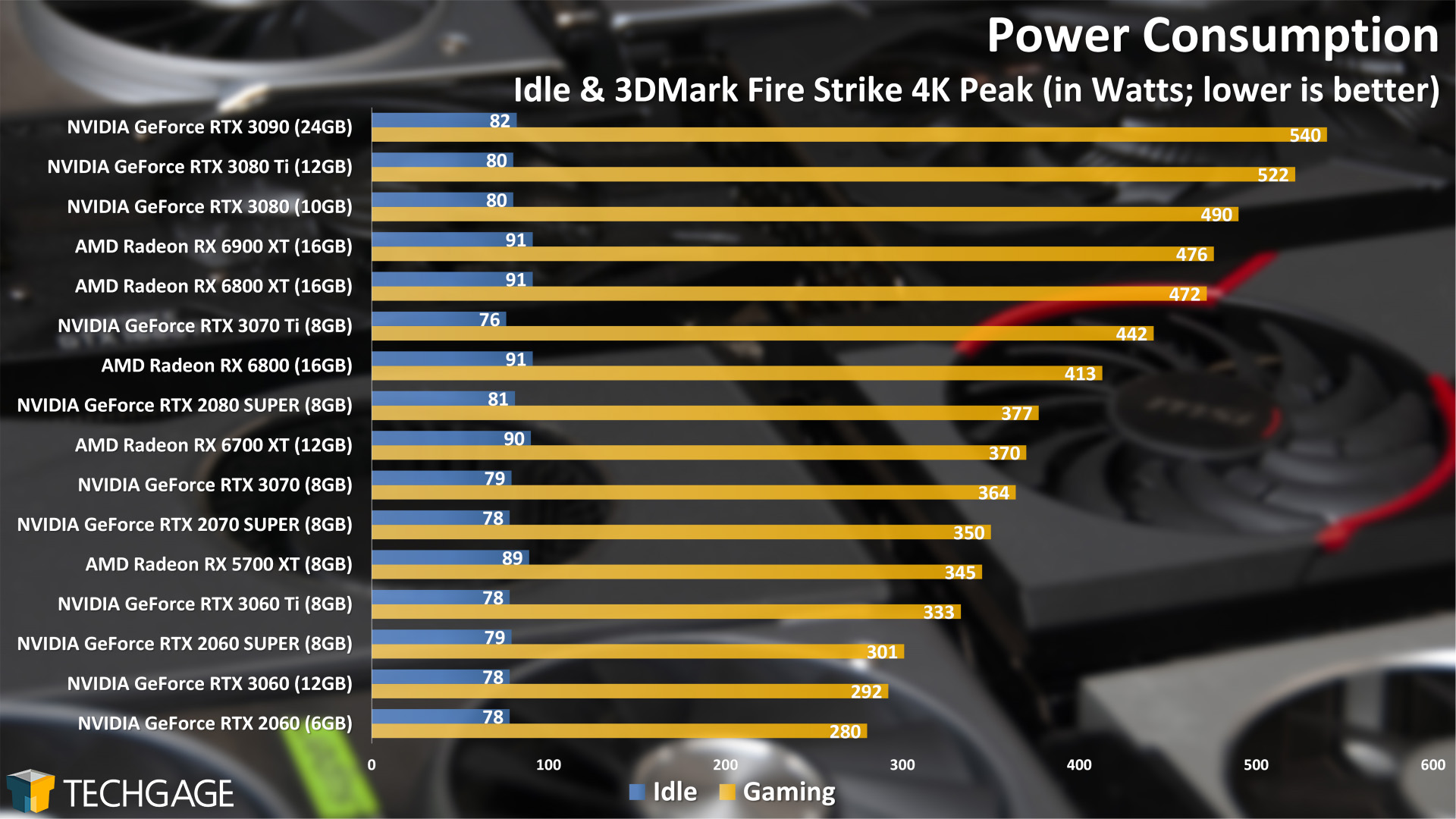 While the RTX 3070 Ti didn’t deliver quite as large a gain over the RTX 3070 as the 3080 Ti did over its non-Ti, NVIDIA’s seventh Ampere GeForce draws considerably more power than the non-Ti – a full system load difference of 364W to 442W. That’s about 8W more than the TDP delta NVIDIA pinned to its 3070 cards, so it seems to be in-line with expectations for the most part.

Overall, the RTX 3070 Ti delivered pretty much exactly what we’d expect based on the paper specs. The core count boost over the RTX 3070 is modest, and while the memory is capable of pushing a lot more bandwidth, those two boosts combined didn’t set a new performance bar in the same way the RTX 3080 Ti did with the RTX 3080. 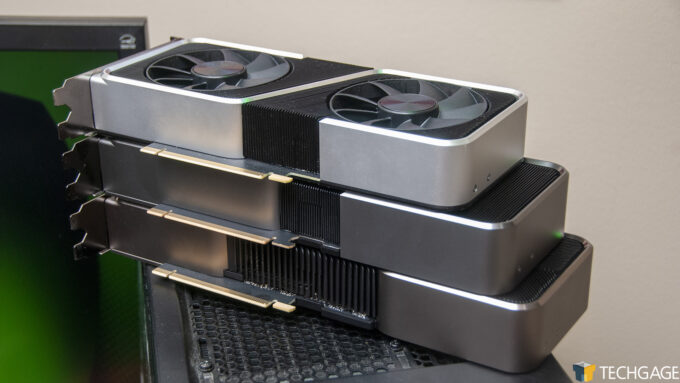 As we’ve harped on about before, it’s a little frustrating to review GPUs right now, simply because the SRP we’re given is not going to be what most people will pay. We really hope NVIDIA’s pursuit of implementing cryptocurrency mining limiters proves successful, because we need more of these cards to find their way to the hands of actual gamers. If gaming GPU demand was high strictly because of gamers, we highly doubt we’d be seeing the outrageous prices that are prevalent on eBay and the like today.

We sure do miss the naivete that we had with the launch of Ampere last fall. We had little idea that the market would become what it has, making it really painful to haul out a credit card to build that new rig. The current state of things definitely puts a damper on what could be otherwise really interesting launches.

Overall, the RTX 3070 Ti delivers exactly what has been promised, although we do wish in some cases that it eked a bit more performance out of a game than we witnessed. After all, this is a $100 premium, and there is no increase to the frame buffer size. If you go back to all of our performance charts and instead compare RTX 3080 to RTX 3070 Ti, you’ll see a much greater gain for that $100 premium (including another 2GB of memory).

Ultimately, I think the RTX 3070 Ti really shines a light on the RTX 3080 more than anything. The RTX 3080 seems to be the card to go for if suggested retail prices all remained in tact.