OCZ has become quite a large stature in the enthusiast market over the past few years, which isn’t much of a surprise. We’ve been reviewing their products for near two years now and have been impressed time and time again. Of course, while they release new products to test the waters, their pride and joy really is memory.

We first saw the release of their XTC (Xtreme Thermal Convection) in late 2005 and shortly after that time, we’ve seen many concurrent releases. First was their Special Ops Edition and even a multi-colored Ti Alpha series.

As for branded memory, they’ve gained the support of both NVIDIA and ATI, which are produced in black and red colors, respectively. More recently they’ve released their Flex XLC (Xtreme Liquid Convection) modules, capable of handling your water cooling setups. Throughout all of these releases, OCZ has had the habit of using simple three letter acronyms in their titles, especially those with a C at the end. Is this deliberate? Perhaps so, but it looks good from a marketing standpoint.

By now you’ve figured that they have exhausted all of their ideas when it comes to memory cooling, but that’s hardly the case. Today we are taking a look at their latest kit which utilizes their Reaper HPC (note the C at the end). The idea is rather simple. Each side of the module has a solid rippled black spreader, but the top of the module has a channel (Heat Pipe Conduit) to rest a heat pipe. Heat pipes have become incredibly popular over the past few years and can be found on most any good air cooler. How is this to help?

As heatpipes heat up, their liquid inside begins to boil which results in moving away of the heat. On all air coolers that utilize heatpipes, the heat travels along the length of the pipe itself and then is dissipated once it hits the fins. So, you’ll never have “just” a heatpipe… you need some way of dissipating the heat. On the HPC, there is a single heatpipe with a small fin array on the very top. Sounds like a good idea, but we’ll be the judge of just how useful/efficient it is.

The Reaper HPC arrived in the usual plastic blister pack, although this one specifically is a lot larger to accommodate the modules. In our Flex XLC review, I noted that it’s packaging was too flimsy because the modules were easily shifted, even after the original shipment. 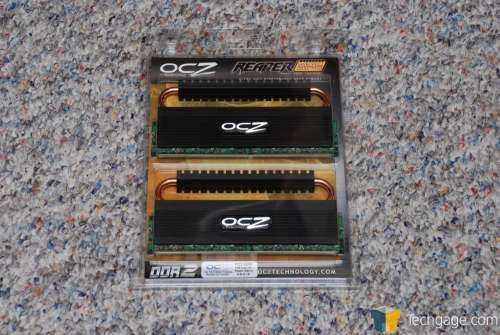 OCZ either took note of that themselves or took my comments seriously, as this new packaging is heat sealed twice on each side. Normally I dislike this method, because it can be a real pain to open. I’ve experienced this with Mushkins packages, where I have to grab a knife and literally tear the package open.

The method used here is similar to Mushkins, but it’s not as tough to tear apart, so you will not need to grab scissors or a knife. Though it’s easier to open, the modules still remain completely safe during shipment. This method gets my seal of approval ;-)

The entire spreader is matte black, except for the heatpipe of course. I was skeptical of the look when I first learned of them, but now that I’ve seen them in person I think differently. I’m glad they decided to use a black spreader, it’s a lot easier to make a spreader look “cool” with that color. 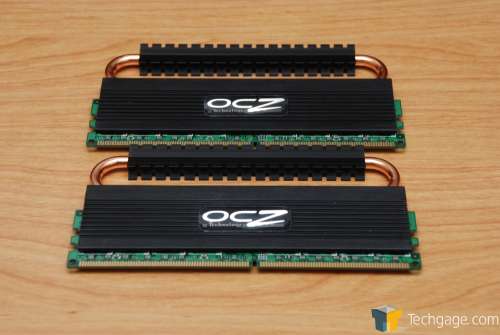 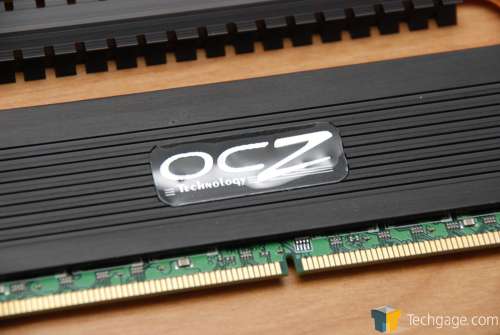 In the image below, you can see just how the heatpipe sits in the conduit. 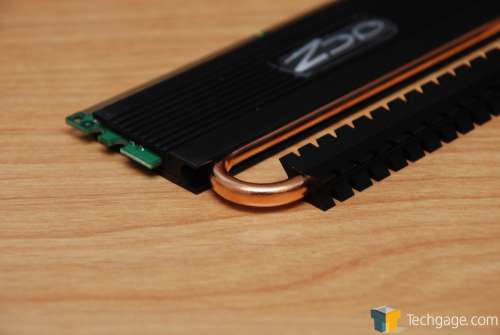 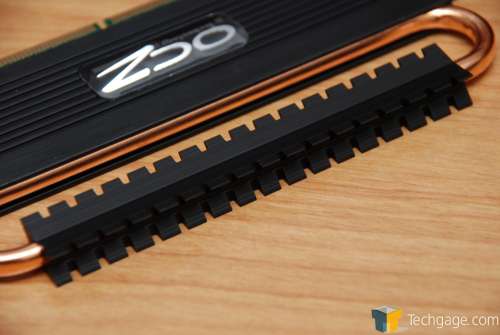 On the back you will find the sticker that displays all the relative information, including timings, frequency and model. 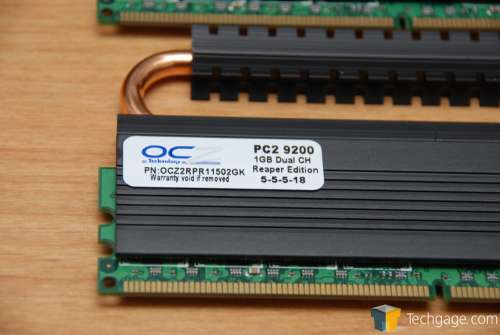 Overall, these are some great looking modules. Although it seems rather extravagant compared to normal heat spreaders, I like what OCZ have done with their HPC. Without further ado, let’s jump right into overclocking.

The first thing I do whenever I receive a new kit of memory for review is find out it’s price. From there, I can see exactly who it’s marketed to and can usually also garner what kind of overclocking ability I should except. Luckily enough though, even value kits lately have been quite overclockable, thanks to Micron D9GMH chips, which I assume is what the Reaper HPC use simply because they are chips that offer superb performance for a good price.

That said, these modules retail for $319.99 on average. So, it’s placed close to “high-end”. I perused a few e-tailers websites and found that OCZ is one of the few companies to actually sell modules at this speed. The only other company was Mushkin and that particular kit was $100 more. As for faster, Kingston takes that crown with their PC2-9600 kits, none of which were in stock when I looked. So overclocking aside, given the stock speeds and price, this is a great kit.

Pricing aside, I had a couple goals to seek out while testing these modules. First and foremost, I wanted to see how much of a difference the passive heatspreader made. I don’t have a digital thermometer, so I am playing everything by “finger”. I will get more into this in the conclusion. The second goal is to see how far these can be pushed. Given their price and stock speeds, I assumed they would hit at least PC2-9600 speeds or slightly higher.

That said, here are my results, after a few nights of testing:

As you can see, the results are rather impressive. 642MHz proved to be the kits maximum stable overclock, and in turn became the highest DDR2 overclock I’ve had. Second place now belongs to Corsairs Dominator 9136 kit. 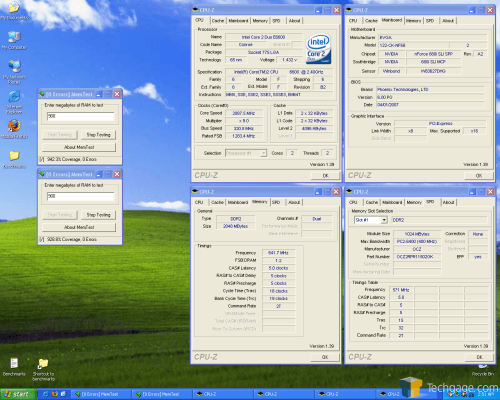 You might have noticed that I am using tRC 19. Normally I try to keep that a tad lower, ie: 13 like the rest of them, but even with 16, MemTest errored at the 500% mark. Bumping up to 19 allowed a completely stable overclock that also proved 3D Mark 06 stable.

Most of the results listed deal with how all of our settings scaled, although there will be direct comparisons to other kits of ram as well. For the sake of congruency, I followed the same overclocking rates as previous reviews. 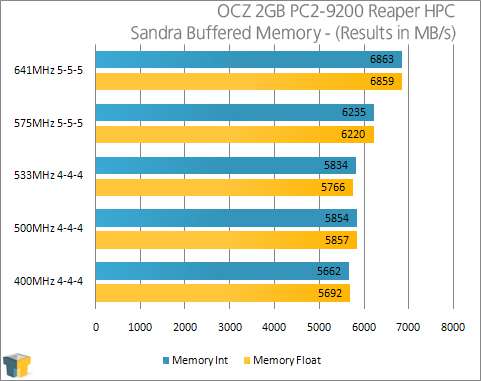 Next on the list is Everest 3.5, with it’s read/write and latency tests. We broke through the 8K mark in our read tests and came close to 5,500 in our write. These benchmarks are heavily CPU bound as well though, so the higher your CPU frequency, the better effects your memory overclocks will have. 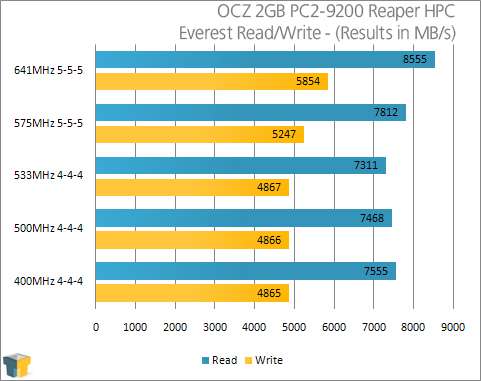 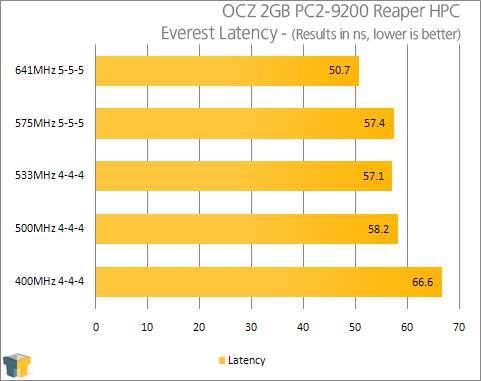 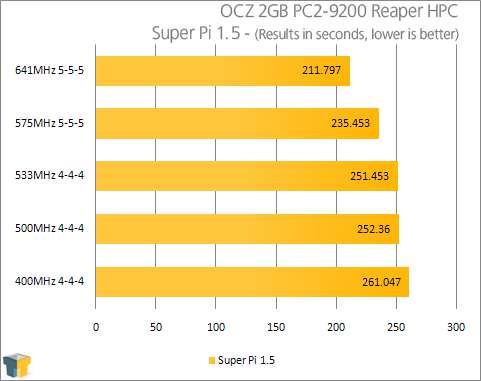 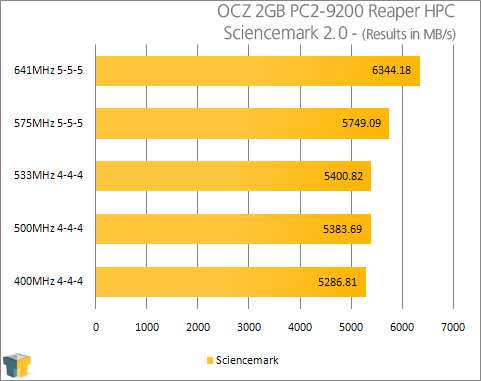 Finally, let’s compare this kit to others previously reviewed.

Here, we compare our overclocks of the memory being reviewed alongside other recently evaluated sticks. These graphs include benchmarks with each kit of ram at DDR2-1000 4-4-4-12-13 2.1v along with each kits own top overclock. While the DDR2-1000 results should not vary much, the top end overclocks will, given that each kit will top out differently.

Since our Reaper kit managed the highest overclock of any previous kits we’ve reviewed, it is not any surprise to see it top all of the charts. 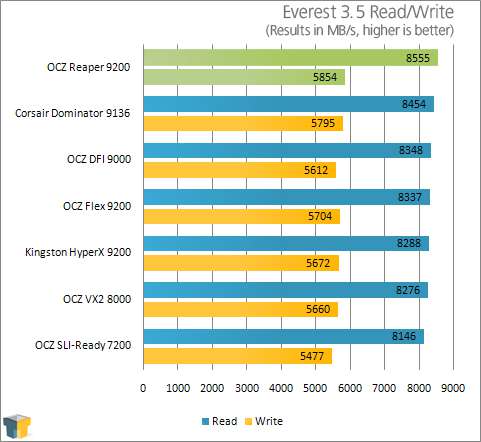 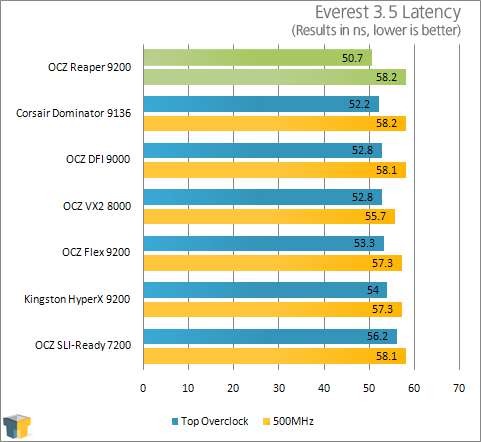 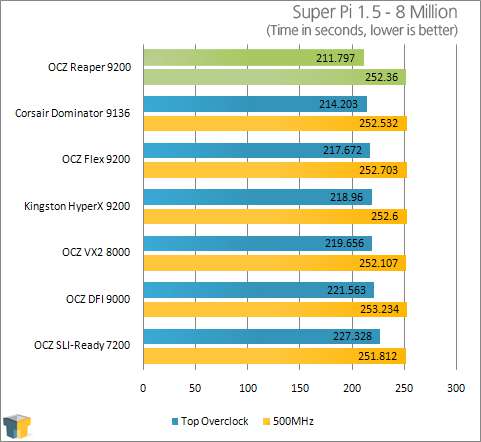 It probably will not come as a surprise to know that I recommend these modules. This kit proved the highest overclock of any other we’ve reviewed in the past. Corsairs DOMINATOR 9136 was at the top for quite a while, but it was dethroned thanks to the Reaper 9200’s extra 7MHz.

From an overclocking standpoint, you cannot go wrong. How about the price, though? Currently, there are only a few retailers who stock this exact kit. Not surprising since it was only announced a few weeks ago. The price I’ve seen on average has been $315, so I took a few minutes to see what else was available for the same or lesser price. 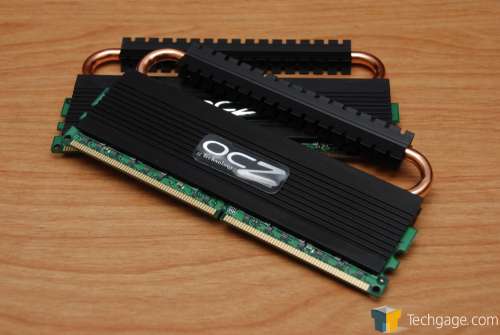 One kit that caught my eye was OCZs own Flex XLC rated for the same speeds, which happens to hover around the same price. If water cooling is in your plans, that might be a good idea.

The only other kits available in the same price bracket worthy of consideration are 4GB kits, (starting off at around $50 more), but the overclocking potential will not likely be a good one. OCZs 9200 Reaper is the fastest kit currently on the market for the price. Every other 9200 kit I stumbled upon cost far more.

If you have $300 to spare, this kit would be very worthy of consideration. For that, I am going to award it an 8 out of 10 and award OCZ our Editors Choice award. The overclocking potential greatly outweighs any extra cost in price, and even as it stands, it’s cheaper than equal competition.

As for the Reaper heatspreader, I could not touch much on the benefits without a digital thermometer, although I am working on getting one in. I’ve always believed that overclocking without a fan was foolish though, and that opinion still stands. Stock speeds for the 9200 kit require 2.3v. While stable, it still gets too hot to touch after benchmarking. So for any overclocking at all, I highly recommend a fan. No passive heatsink available will rid the need for a fan for serious enthusiasts.