by Rob Williams on March 2, 2010 in Motherboards

With AMD’s processor line-up as complete as it is, focus has been shifted a bit to the chipset department, and the result is the 890GX. Although it’s packed with features, it’s surprisingly inexpensive. In addition to introducing the Radeon HD 4290 IGP, it also brings native support for SATA 3.0, improved HD support and much more.

As it’s been just over two years since AMD launched its last major chipset architecture, the 7-series, it seems appropriate that with the company’s full line-up of current-generation processors being already available, the 8-series is being ushered in. We’re not just dealing with a chipset meant for one type of audience either. Rather, the first launch, 890GX, is appropriate for low-end and high-end consumers alike.

Due to what’s been an incredibly demanding past couple of weeks, I have been unable to put much time into testing with AMD’s 890GX chipset, so for today, we’re simply going to take a look at what’s new, and get a good idea of what you can expect to see from it. In the near-future, I’ll follow up with a better look at what’s being offered here from a real-world performance perspective, and see how it compares to Intel’s latest H55/Clarkdale offerings.

As the “GX” implies, the 890GX isn’t likely to be AMD’s highest-end during this generation, but it brings a lot to the table in terms of updated and new functionality. Some of what we’ll see should even cause Intel to feel a little foolish, because as hoped, 890GX fully supports SATA 3.0 (6Gbit/s) natively… something that would have been really nice to see with Intel’s most recent chipset launch, H55/H57.

Of all the features 890GX bundles in, SATA 3.0 is just one aspect AMD focuses on. Of course, the IGP (integrated graphics processor) has been upgraded, to what AMD calls its ATI Radeon HD 4290, which compared to the previous generation brings new media capabilities and also increased gaming performance. There’s also mention of superb USB 3.0 support, though that’s not built into the chipset itself.

To break down 890GX in an efficient manner, I’m going to post slides directly from AMD’s press deck. We’ll start with what AMD considers to be good system recommendations, and the reasons why. 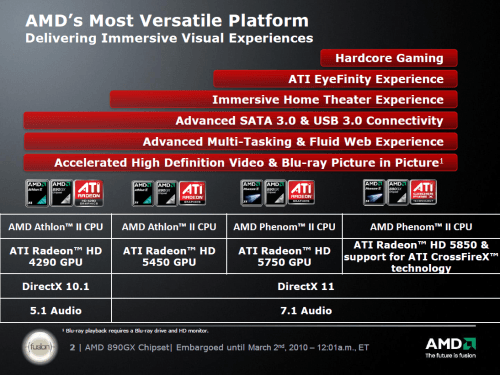 To clear it up right away, there’s a reason that the brand-new Radeon HD 4290 isn’t called a 5290… it supports DirectX 10.1, not 11. Some might scoff at AMD’s decision, but let’s be real… DirectX 11 on a desktop PC is going to require a beefy machine to deliver an enjoyable experience, so even if it was supported on a “5290”, the brawn behind the chip wouldn’t do a great job at powering it. Therefore, 10.1 seems appropriate.

With its wide-range of processors and graphics cards, AMD lists four overall categories based on budget and performance. On the low-end, which is where users would utilize the HD 4290, the best CPU to be paired up would be any Athlon II. For increased graphics performance, not to mention improved audio (5.1 > 7.1), we begin to get into the discrete cards. At both the mainstream and high-end spectrum, AMD of course recommends its Phenom II processors along with its HD 5700 and higher graphics cards.

As we learned in our Clarkdale launch article, Intel has a strong focus on having robust media capabilities with its chips, and with its 890GX chipset, AMD is no different. It has aimed to support all of the current features that consumers may want, and with full support for Blu-ray 1.1 (including dual-decode), you can expect a great experience here. For display connectivity, 890GX supports HDMI, DVI and DisplayPort, though the available connections will vary from motherboard to motherboard. 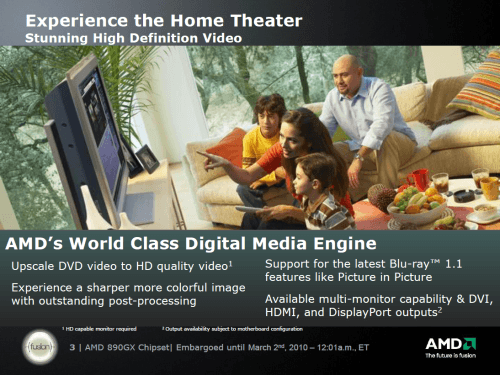 In addition to catering to high-definition content, AMD includes hardware-accelerated DVD upscaling, which will turn those 480p movies into a clearer 720p resolution, along with real-time color and contrast adjustments. And with its AVIVO technology, accelerating more than one video at a time is a non-issue. Of course, for those who also want to take advantage of AMD’s Stream technology, you can accelerate the transcoding process with the HD 4290 IGP.

If there’s one thing AMD has proven to do well, it’s graphics, and for that reason, you could expect that the HD 4290 IGP would make for some great competition compared to Intel’s Clarkdale IGP. If AMD’s internal performance benchmarks are anything to go by, it has the advantage in pretty well every current game. Though I haven’t tested 890GX in this regard personally yet, I have little doubt that this is true. 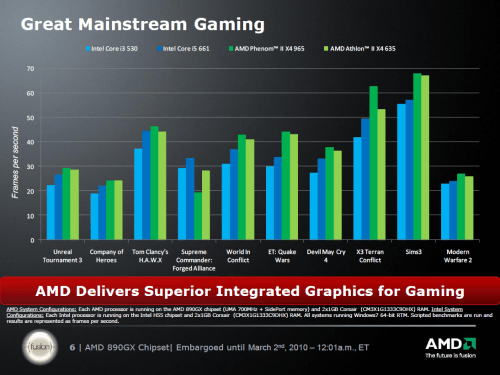 It’s not mentioned in the press deck as to the resolutions run here, but as Intel’s IGP is capable of either 1024×768 or 1280×1024 depending on the game it could be assumed that it’s either of these two. So, we’re obviously not dealing with high-end gaming here, but AMD doesn’t claim to be. The HD 4290 is designed for those who simply want good HD acceleration and capabilities, along with modest gaming performance.

Nothing gives a great overview of a new architecture like a block diagram, and below that’s just what we can see. We’ve already discussed a lot of what’s available here feature-wise, but the one thing of note that we didn’t is the native SATA 3.0 support. Unlike all of the currently available H55/P55/X58 Intel motherboards which currently feature 2 supported ports, models featuring AMD’s 890GX will include 6. We won’t see such support from Intel until Sandy Bridge at the earliest, so AMD really has a strong lead here. 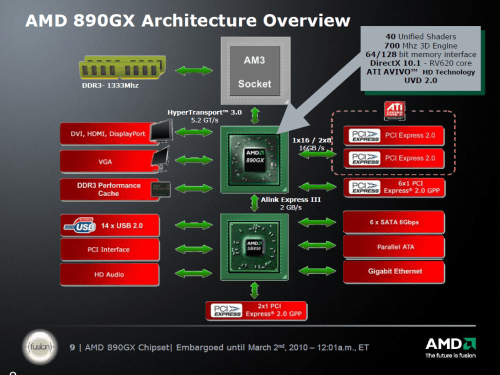 One issue currently plaguing Intel’s H55/P55 motherboards is that due to the lack of available PCI-Express bandwidth, neither SATA 3.0 or USB 3.0 connections can experience the full benefit of their technologies. For example, if a device from both families is used, then only 250MB/s worth of bandwidth is available, which is about half of what it could be. AMD made sure to get around this issue.

Thanks to its SB850 Southbridge, there’s no need for the PLX chip that’s become common on Intel motherboards as of late. There’s naturally enough bandwidth to handle all six SATA 3.0 ports along with USB 3.0 devices, should a controller be made available on the board. As I mentioned in the intro, AMD has beat Intel to the punch with a few things in 890GX, and this is one of the best ones. 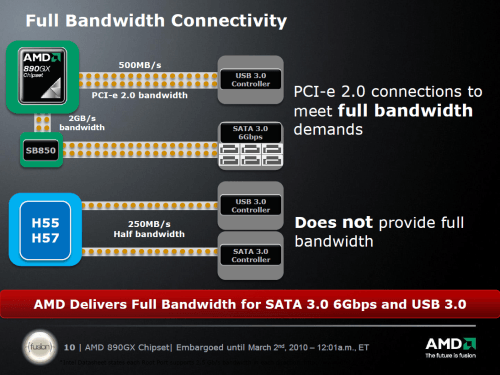 It’s been no secret that over the past couple of years, AMD has had little product to truly compete against Intel with, so it has made up for it in overall value. Below, you can see two examples of how AMD believes that you get a much better machine by going with its products over Intel’s. As I haven’t been able to directly test with similar configurations yet, I don’t see a real fault with AMD’s configurations here. 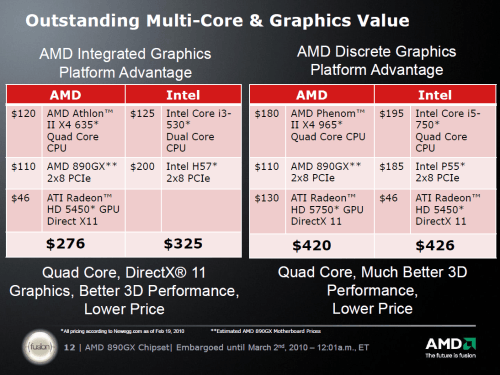 Also, while I haven’t touched on it yet, Hybrid CrossFireX makes a return here. The HD 4290 can be combined with the HD 5450 for improved overall graphics. As the HD 5450 isn’t exactly a powerhouse, the combination of the two GPUs gives hope to improved performance, while opening up support for DirectX 11, Eyefinity and so on. This is a feature that won’t be used by many, but it’s nice to see included nonetheless.

As a whole, AMD’s 8-series chipset looks great from a features standpoint, and it certainly will cause some to think twice about going with a Clarkdale machine, thanks to the inclusion of Hybrid CrossFireX, improved GPU performance/support in general, native SATA 3.0 and full bandwidth to both that and USB 3.0. A chipset may not be the most exciting product out there, but as far as they go, AMD has done well here.

One thing AMD wants to point out is that the 8-series will perfectly compliment its VISION foundation for 2010, and sometime during the second quarter of this year, we’ll see the first Phenom II X6 processor (or processors, we’re not sure). If AMD hits the launch date as scheduled, both it and Intel will have launched its respective hexa-cores mere months apart. It goes without saying that we can assume that AMD’s models will be better-suited for the budget consumer, though, so there is definitely reason to get excited.

We’ll be taking a deeper look at 890GX and its new Radeon HD 4290 IGP in the near-future, and hope to have something to publish in a couple of weeks. This month is absolutely with embargoes left right and center, and then we have our huge contest… it’s a bit overwhelming, to say the least. So, apologies for not having some real performance data here for you today, but we’re working on getting it to you as soon as possible.

Before I wrap up though, I want to give a quick preview to the motherboard we’ve done light testing with up to this point. It comes from ASUS and is about as feature-rich as they come. Like the 890GX chipset promises, it features support for 6x SATA 3.0 ports and also USB 3.0, as the M4A89GTD PRO/USB3 model name would suggest. 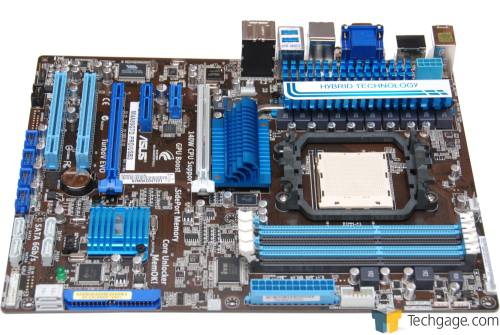 One interesting feature I really liked the sound of on the box was “Core Unlocker”. By now it’s old news that many AMD dual and tri-core processors can possibly have the fourth core unlocked and still retain stability, but up to this point, it hasn’t been as simple as changing one lone setting to get the job done. Well on this board, it is, and the setting couldn’t be more clear. Enable “Core Unlocker” in the BIOS, reboot, and hope for the best. Tres simple!

We’ll take a deeper look at that board along with our follow-up 890GX article, and will also likely take a look at Gigabyte’s primary 890GX offering as well.