Acronis has just followed-up to its award-winning PC backup software True Image, and as we’re big fans of the previous versions at TG, we’re taking a quick look 2013 here. This time around, Windows 8 support is introduced along with a major emphasis on cloud storage – and if nothing else, its pricing per GB is bound to entice you.

Note: If new to Acronis True Image, we recommend you first read our in-depth look at the 2011 version before reading this one.

Thanks to the look I took at Kingston’s SSDNow M bundle in 2009, I came into contact with Acronis’ quality backup software, True Image. Up until then, I had been using solutions such as Norton Ghost for backing-up our benchmarking rigs and also keeping active backups of personal PCs around the house. Given I ran into some frustrating bottlenecks there, the reaction I had to discovering Acronis was – well, I think I heard the battle-end music from Final Fantasy VI play in my head.

I might be making that up for the sake of trying to come off as witty, but the importance of Acronis’ software in my virtual toolbox cannot be understated. If it didn’t do what it does so well, I’d have to resort to other options that are in no way, in my experience, as reliable and easy-to-use.

As I mentioned in our review of Acronis True Image Home 2011 (Acronis has dropped ‘Home’ from the 2013 name), one of the biggest reasons I first started exploring the program was that it actually supported backing-up my Linux partitions. Nothing has changed since then, so if you’re like me and have Linux and Windows installed to the same drive, you can feel rest-assured that the program can handle backing it all up when you go the route of capturing the entire drive. 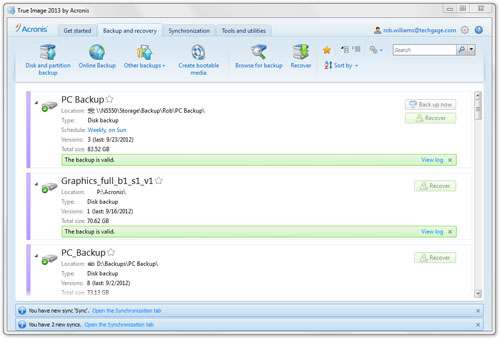 Like most annually-updated software, Acronis True Image doesn’t usually bring a slew of major changes to each release, which means you’re usually safe to go a year or so before committing to an upgrade. That said, since our review of TIH 2011 covered the bulk of the program in great detail, I highly recommend you read through that first if you are simply interested in all the program can offer. Here, I’m just going to be taking a quick look at what’s explicitly new to 2013.

One notable addition to 2013 should come as no surprise at all: Windows 8 support. The program will remain identical under this OS, with Metro enhancements ignored (a wise decision, I’d imagine).

Acronis’s Cloud service isn’t new, but 2013 brings some significant changes. For starters, there’s a proper Web front-end, a la Google Drive and Dropbox, so that you can access your data easily from wherever you have Internet access. Going a bit further, the company has also released apps for Android and iOS-based devices that allow you to both upload data and access what’s already there.

Setting up Acronis Cloud is pretty easy. A “Sync” folder will be created by default under your user folder, which allows you to quickly throw a file into it for it to be synced across your devices. Past that, regular folders can be added as well, which will remain constantly monitored and updated to Acronis Cloud once changes are spotted (usually occurs almost instantly). 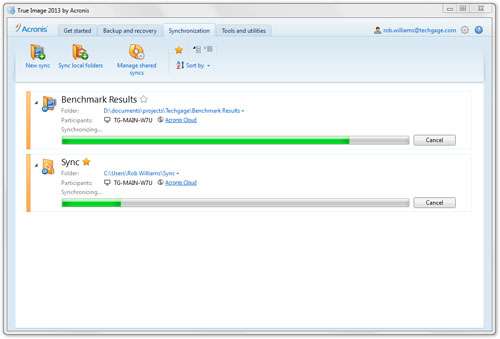 A shot of the Web interface can be seen below: 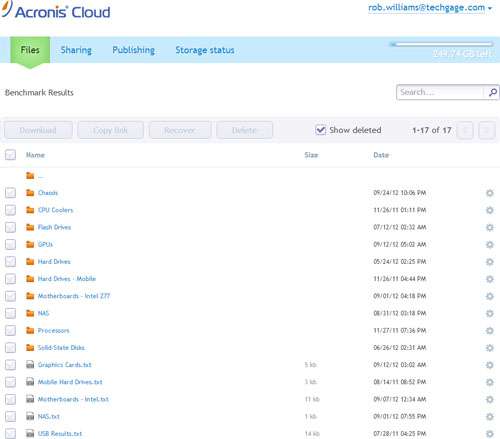 Nothing can be opened from within this interface, but instead everything must be downloaded first. This is a little less convenient than say, Google Drive, which does allow that, so if you need that functionality Acronis Cloud won’t be of much use for anything except strict backup. One nice feature is that you’re able to click on any file or folder to create a shareable URL – one that doesn’t require the other person to sign-up for to gain access.

One other neat feature is that if you happen to delete something from your online sync folder, you’ll receive a message of it on your desktop. So if somehow you managed to delete a file by mistake, you’ll be able to simply click this pop-up in order to undelete it. As Cloud can also keep multiple copies of each file, you’re really unlikely to lose data when using it.

The mobile app is for the most part functional enough. It works much like the Web interface, except it has a more attractive interface. The only problem during use I ever ran into was that sometimes syncs would take a while to reflect, requiring me to stop the app entirely (by brushing it aside on Android ICS / JB), and then re-open it. 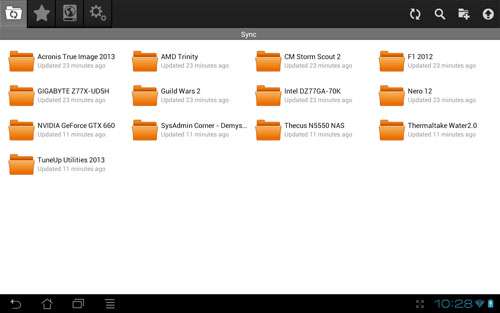 From this interface, you’ll be able to upload any file from your Android or iOS device. If there’s any functionality lacking that some may want, it’s that you can’t check up on your PC’s Acronis (tib) backups here. While not entirely necessary, it’d be a nice feature since it’s such a major focus of the main application.

And… this about wraps up what’s new with Acronis True Image 2013. In the company’s datasheet for the program, the first bullet-point refers to Windows 8, while the other four refer entirely to Cloud and related abilities mentioned above. The company is clearly interested in furthering its cloud capabilities, as it recently brought Red Hat cloud exec Scott Crenshaw to help see things forward. Given Acronis’ focus on keeping your data safe, this could grow into something great.

I do hope that with the next revision of its cloud interface, though, Acronis will enable you to view some of the documents you have uploaded for the sake of ease. If I am just wanting to reference a document fast, I really don’t want to have to download it first, and I’m sure I’m not alone. This is one of the best features of a service like Google Drive, in my opinion.

There are two areas where Acronis does excel, however. It has the ability to backup multiple versions of a file, which can be immensely useful in certain situations (such as when you purge part of a file and don’t immediately realize it).

The other perk is the pricing. Acronis currently only offers a 250GB plan, but sells it for a modest $4.95 per month. By comparison, Google sells 200GB of storage for $10 per month, whereas Dropbox charges $20 per month. Microsoft doesn’t have a 200GB option that I can see for its SkyDrive service, but it charges $5 per month for 100GB. Compared to these services, Acronis offers the best deal by a long shot.

If we didn’t cover something in this quick review or in our in-depth look at the 2011 version, please comment in our thread and ask away. Based on everything discussed here and what we know of previous Acronis versions, would we recommend it? As I’m sure is made obvious by the intro, yes – it’s very much worth it for anyone who genuinely cares about keeping their data safe and PC backed-up.

Is it worth an upgrade over 2012 or 2011? If the updated cloud abilities intrigues you, you need Windows 8 support or need support for UEFI / GPT (also in 2011), it could be. The changes aren’t major, so the older the version you own, the better the upgrade will feel. I personally wouldn’t upgrade from 2012, but I would from 2011 for the added support mentioned above and the finer-tuned bootable CD and feature-set.