When we evaluated AMD’s Radeon Pro W6800 and W6600 workstation graphics cards a couple of months ago, we couldn’t help but speculate on the models to come. After all, at a time when AMD’s gaming lineup had six (now seven) models, Radeon Pro had only two on offer. Thankfully, those two cards catered to important performance levels, but clearly, there was room for more.

In this article, we’re taking a look at the third Radeon Pro GPU of the current generation to drop: W6400. For a multitude of reasons, this card is pretty interesting. Catering to the low-end part of the professional market, the W6400 has only 4GB of memory, no need for a power connector, and can be used either as a normal sized or low-profile card – the latter of which would be ideal for small form-factor PCs. 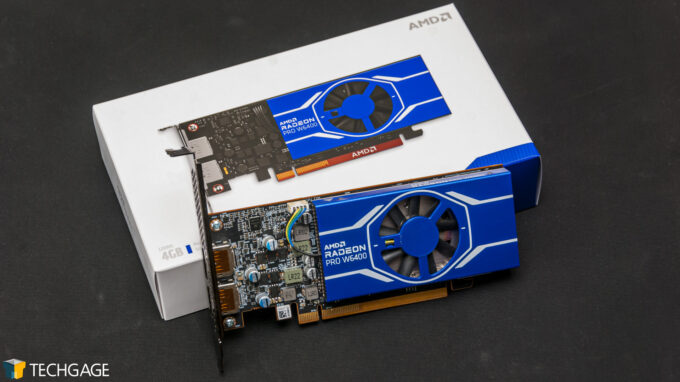 With its more modest stature, the Radeon Pro W6400 caters to those with light to medium workloads, with a huge emphasis on CAD work. Its ultimate goal is to deliver high viewport frame rates, to make designing a smooth affair. If you plan to do any reasonable amount of rendering with more complex projects, the much more powerful W6600 will serve you a lot better.

Before going further, the table below will highlight AMD’s current and previous Radeon Pro lineups, so we can gain a better understanding of what’s being offered:

There’s an important distinction with the W6400 that the above table doesn’t highlight: the GPU does not include accelerated video encoding. That is to say, if you have a video solution that allows you to choose AMD’s encoder, it will either not work at all, or it will work while relegating all of the processing to the normal GPU cores. We’ll talk more about this on page 4.

To launch a card without a dedicated video encoder is quite strange to us, and an unfortunate trait. However, as a card focused hugely on design work, the lack of a video encoder isn’t likely to rub too many the wrong way, although it would have been nice to see one included anyway. It might be worth pointing out that the Radeon RX 6500 XT gaming card shares the same encoder-less design. 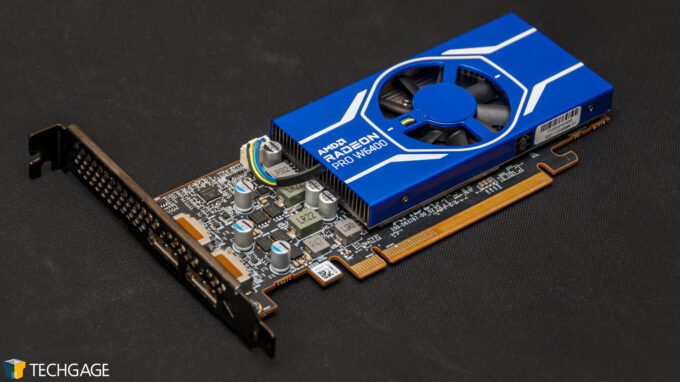 A modest card the Radeon Pro W6400 may be, but it still has the goods to power two 8K HDR monitors, although we suspect the majority of those using such a card will probably be sticking to 1080p or 4K. 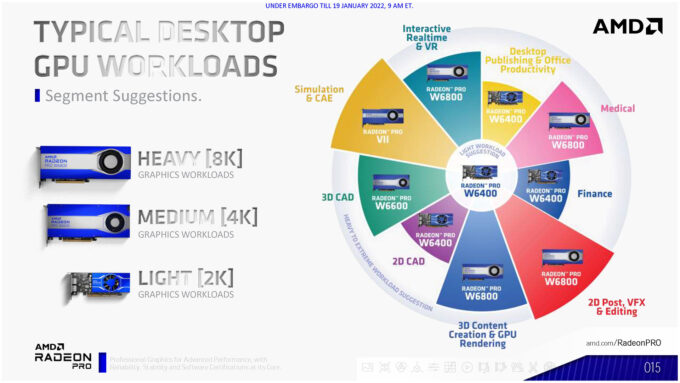 As a professional workstation card, what sets the Radeon Pro W6400 apart from a card like the RX 6500 XT (aside from specs changes) is certification for myriad professional applications, like those from Autodesk, Dassault, PTC, Siemens, and so forth. AMD works with vendors to ensure its drivers are as cooperative with these software packages as possible, improving stability, and in some cases, performance.

Our system as tested:

Our benchmark results are categorized and spread across the following pages. On page 2, we’re taking a look at viewport performance across a range of popular suites. Page 3 is home to our rendering tests, using Blender, Radeon ProRender, and LuxMark. Page 4 revolves around encoding tests, which are handled by Adobe’s Premiere Pro, BRAW Speed Test, and an application we throw into the same pile: Agisoft’s photogrammetry tool, Metashape. On page 5, we’ll lay out our Sandra synthetic tests, while on page 6, we do the same for gaming, with the help of UL and Unigine. The final page will include power tests along with our final thoughts.