After what has to be considered one heck of a wait, AMD has finally launched its much-anticipated ‘Big Navi’ (RDNA2) graphics cards – starting with the Radeon RX 6800, and Radeon RX 6800 XT. As covered a couple of weeks ago, AMD is pricing the XT card at $649, and the non-XT at $579. It’s not hard to figure out which NVIDIA graphics cards these new Radeons are going up against.

As usual, time was of the essence with this launch. We’ve been spending the past couple of weeks benchmarking up a storm, and still haven’t been able to get as much done as we’d like to, so don’t be surprised to see follow-up content taking a more specific look at certain angles of the new Radeons (including creator performance). 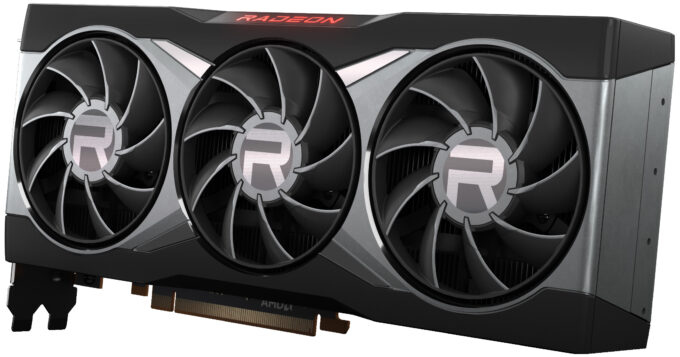 During its launch event, AMD promised some mighty things with the 6800 series. The non-XT seemed to dominate NVIDIA’s new GeForce RTX 3070, and the 6800 XT went toe-to-toe with the 3080. We’re glad to say that our own testing has held up to those promises.

On paper, AMD’s new Radeons are really attractive for multiple reasons. While the $699 RTX 3080 has just 10GB of memory, even the $579 RX 6800 bundles 6GB more. For high resolutions, that should prove beneficial, if not today, then maybe a year or two down-the-road.

With the new launch comes a brand-new reference cooler, and it looks really quite nice. 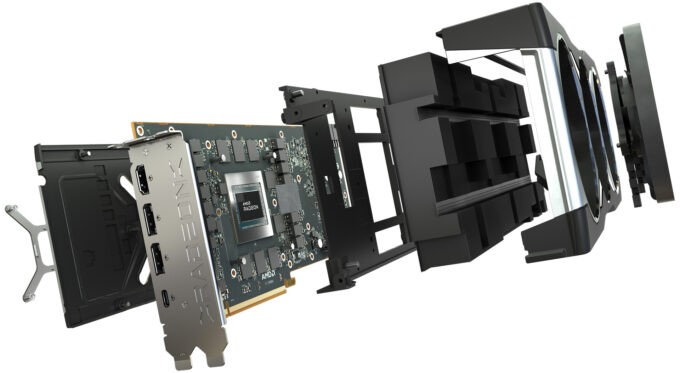 Whether or not the new coolers are more attractive than NVIDIA’s new Founders Editions is really going to depend on your personal taste, but we can say that we’re really glad AMD decided against using a blower cooler this round, as it had done with the original Navi launch.

NVIDIA’s latest Ampere cards all use the new-fangled 12-pin power connector, which has its own pros and cons, but AMD took the safe route and stuck to the typical power ports found on all GPUs prior to Ampere. With two full 8-pin connectors, you will definitely have the power required for overclocking, although at this point, we can’t comment on what you can expect there, as we’ve not dived in yet.

The comparison above highlights the size differences between the XT and non-XT coolers. The XT cooler is clearly thicker, taking up about 2.5 PCI slots, vs. just 2. We didn’t do thorough temperature testing because we’re not entirely sure our tools are reporting temperatures correctly, but based on use with the Radeon overlay, the XT will keep cool a bit easier than the non-XT, even though it’s faster.

If you’re familiar with Radeon, you’re probably familiar with the fact that out-of-the-box configurations are not always perfect. If you’re willing to put the time in, you can configure the GPU to use less power for likely similar performance levels, but that’s something else we haven’t tackled yet, as there are more pressing issues we need to tackle first (eg: creator and SAM testing).

Yet again, limited time has bit us here, and to think, we still know more GPUs are coming before the end of the year. It’s a seriously busy time, so if we haven’t covered something here about the new Radeons that you want to know, please leave a comment.

Since our last gaming GPU review (of NVIDIA’s GeForce RTX 3070), we’ve transitioned our test bed from using Intel’s Core i9-10900K to using AMD’s Ryzen 9 5950X. Considering the gaming performance is so strong on AMD’s new Zen 3 chips, we wanted to bite the bullet early and get moved over. With all of this testing done, it means jumping into near-future Smart Access Memory testing will be a lot easier.

Speaking of SAM, that is one aspect of AMD’s new Radeons we have yet to test enough to produce results for – but we’ll be diving in with more depth soon. Also, we know that many reading this will have wanted a creator look at these new GPUs instead, but it’s proven challenging to get all of this different benchmarking done in time for this launch, so we’re just choosing the safest road for now.

We’ll be working on a creator look at these Radeons soon, but based on our initial testing, there’s no reason to get hugely excited. On the rendering front, NVIDIA is going to continue to dominate if its RT cores are taken advantage of. In Blender, the 6800 XT matches the TITAN RTX, but NVIDIA’s Ampere kicks that performance up a notch, and then dominates if its dedicated ray tracing cores are utilized. In some cases, AMD would need a second GPU just to catch up to a single OptiX-equipped GeForce. For most ProViz software, you can expect normal performance bumps – no leaps.

We hoped to test more than six graphics cards for this launch, but again, time was too limited. Keeping the selection modest for our regular game testing made it possible to test four DXR-specific titles, but again only with a limited number of GPUs (five). Thankfully, the tested models are all we really need to understand exactly where AMD’s performance stacks up.

All tested GPUs have been benchmarked with the latest available drivers, and with an up-to-date Windows 10 (20H2). Our operating system is kept clean and optimized to reduce benchmark interference, ensuring accurate results. V-Sync, G-SYNC, and FreeSync are disabled at the driver and game level. AMD’s latest chipset driver is also used, along with whichever default power profile it sets.

This article includes seven regular game titles for testing, along with four specific to ray tracing, and two more specific to high-performance eSports. To round things out, we also have a bunch of synthetics with the help of 3DMark (including DXR) and Superposition.

Note: You can download all of the tested setting images at once here (ZIP, 9MB). 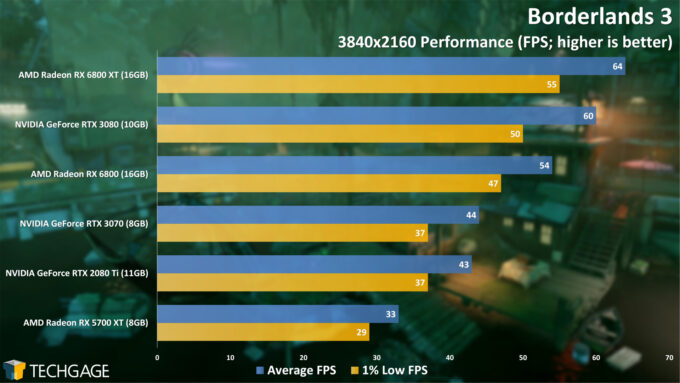 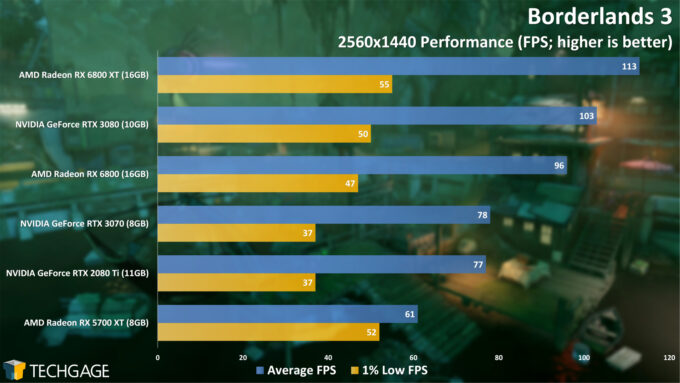 We posted these results in alphabetical order, and it just so happens that the first one, Borderlands 3, puts the new Radeons in a really good light. At its launch event, AMD claimed that its new RX 6800 XT could go toe-to-toe with NVIDIA’s GeForce RTX 3080, and that’s definitely the case here. It actually managed a nearly 10% improvement at 1440p.

On a recent call, AMD mentioned that lower resolutions could potentially benefit more than higher resolutions, since the Infinity Cache is designed in such a way that 1440p resolution could benefit most from a performance uplift – and that’s great, since that’s likely going to be one of the most common resolutions gamers will plan to run. 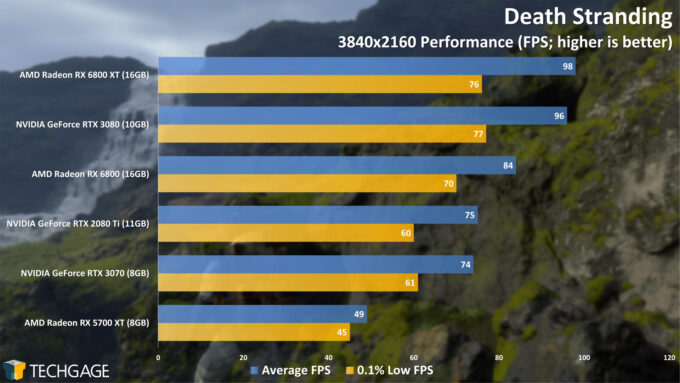 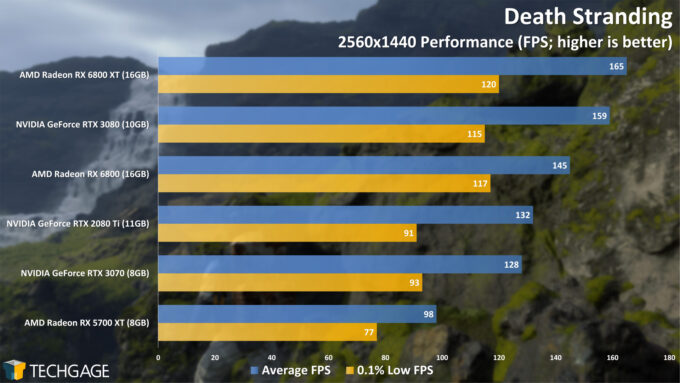 With our second tested game, Death Stranding, it appears that the BL3 set of results was no fluke. Once again, the 6800 XT edges out the RTX 3080 at both resolutions, though with a smaller lead than we saw in Borderlands 3. That’s looking pretty good for a GPU that costs a bit less than NVIDIA’s equal offering.

As for the non-XT 6800, it is so far doing extremely well in comparison to its most comparable competitor card, the RTX 3070. AMD’s RX 6800 costs $79 more, but it seems to be adding quite a bit of overall performance for that price premium. 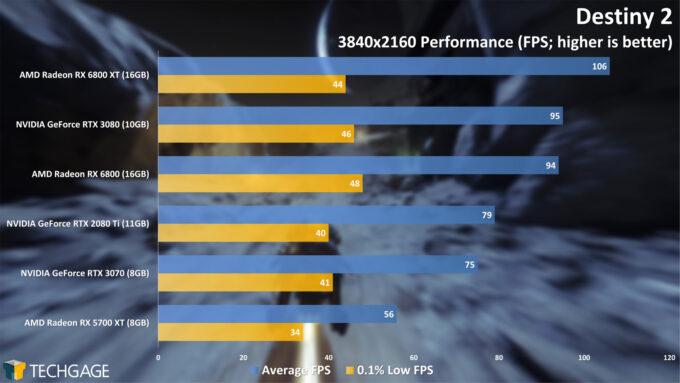 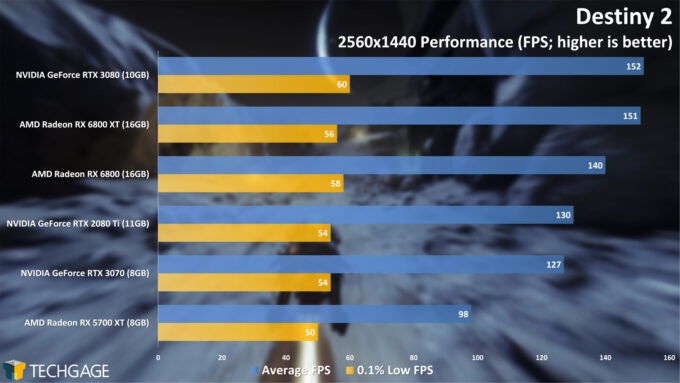 Typically, NVIDIA has had really strong performance in Destiny 2, so to see AMD beat out GeForce once again at 4K is really impressive here. Interestingly, our bigger lead here was actually seen at 4K. Because of the somewhat strange scaling, these particular cards were retested for sanity’s sake, and the results came up the same. At 1440p, both of those competitor cards are effectively matched. 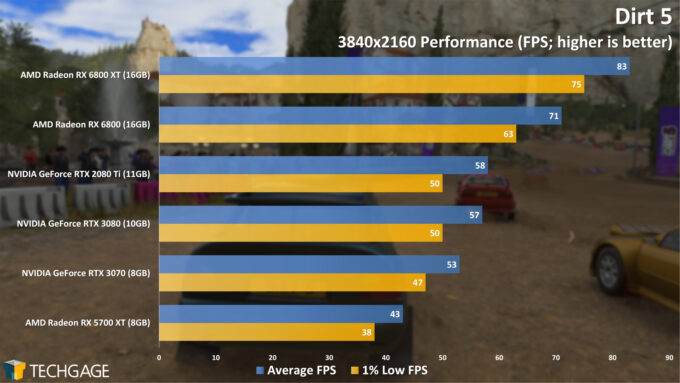 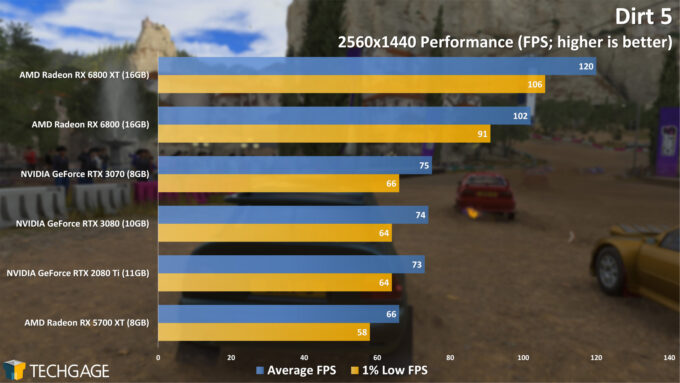 It’s starting to look like an all-out blowout here. We admit we’re not entirely sure why Dirt 5 performs so much better on Radeon than GeForce, but being that it’s an AMD-sponsored title, it’s not too much of a surprise. Still – we don’t ever recall seeing an NVIDIA-optimized title outperforming the competition like this, and based on our Zen 3 performance testing with the game, it’s clear that it could use some more polish. At the same time, it could also be that future GeForce driver updates will smooth out its performance a bit.

Because the performance advantage here is so unreasonably strong, we wondered if we should even post it – but, as it stands today, this is the performance out of the game, so it seems fair to include it. We’re just not confident that the game is playing fair with the competition, given the lack of real scaling. 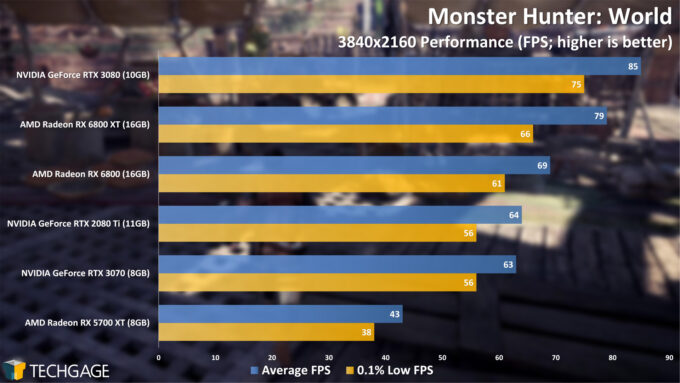 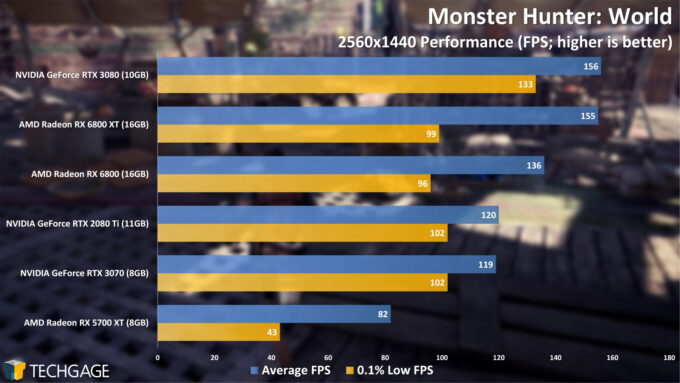 With Monster Hunter: World, we’re seeing our first result of the lot where NVIDIA performs stronger than AMD. Similar to what AMD experienced in Destiny 2, the RTX 3080 in MH: World performed better at 4K than the RX 6800 XT, but both came out even at 1440p. In the other comparison look, however, the RX 6800 continues to show super-strong performance above NVIDIA’s newly-released RTX 3070. 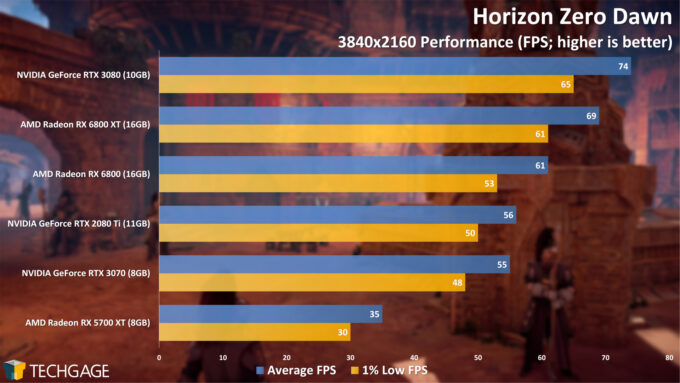 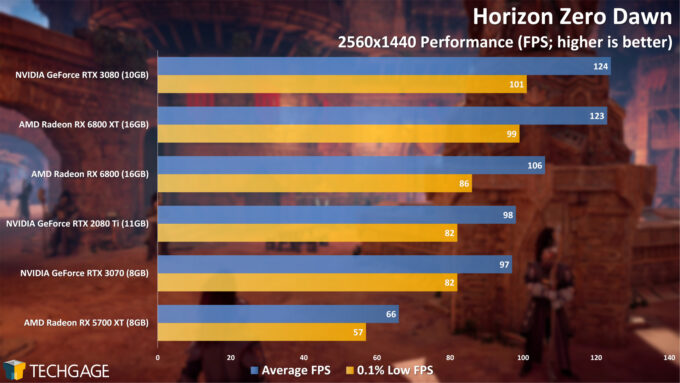 In Horizon Zero Dawn, NVIDIA’s RTX 3080 manages to keep ahead of AMD’s RX 6800 XT, although once again, the gap between the cards was much less pronounced at 1440p. Sometimes we just wish we could equip our test PCs with processors twice as fast as what we have available today, to see how it would impact scaling at lower resolutions (one can dream of a 10GHz CPU). 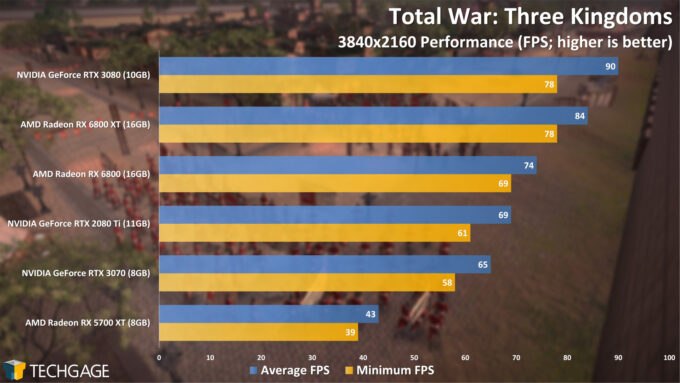 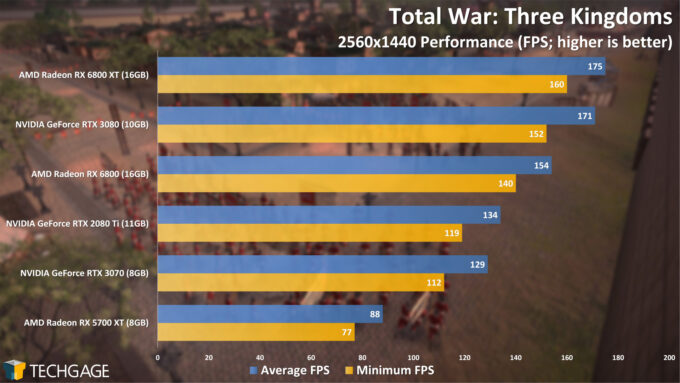 It’s interesting that the first four games in this article favored AMD, and the final three favor the green team. We’re once again seeing the RTX 3080 edge out the RX 6800 at 4K, but flip positions at 1440p. Since we’re dealing with such high FPS at 1440p, it means you could increase fidelity if you don’t have a monitor capable of outputting 144Hz. 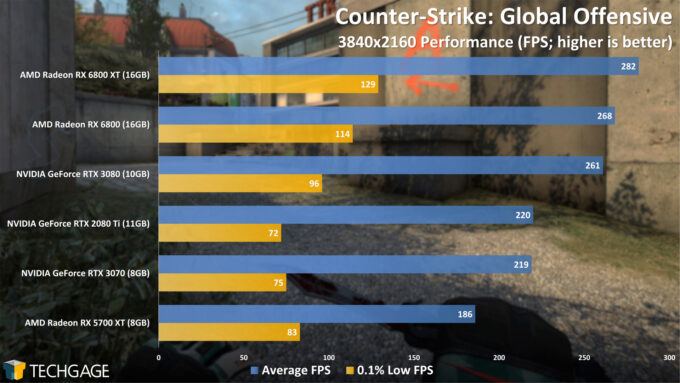 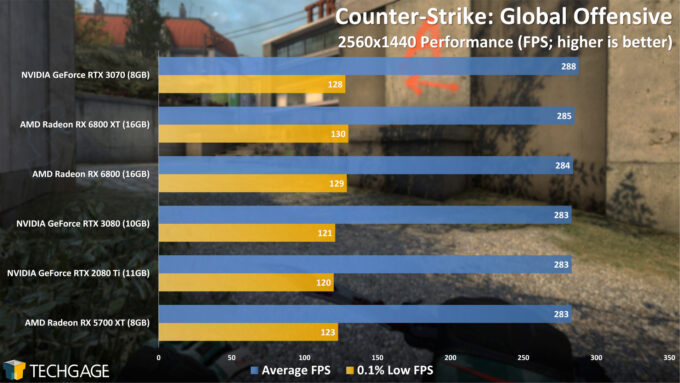 One of the things that sold us on the idea of moving our gaming GPU test platform to AMD’s Zen 3 was helped by Counter-Strike: Global Offensive. We’ve been testing with this game for a while now, and a CPU bottleneck has been quite obvious. Each gen, we’d barely gain in FPS, but Zen 3 changed that, and boosted our previous max of around ~240 FPS, to ~260 FPS on the same GPU. With the RX 6800 XT, we reached even higher – 282 FPS.

Note that these frame rates are not to be taken too seriously unless you have a 360Hz monitor. Our tested CS: GO timedemo is a little more intensive than most. We could run a test through cs_office if we wanted to see 500 FPS+, but it wouldn’t be entirely realistic given competition play uses more modern maps. 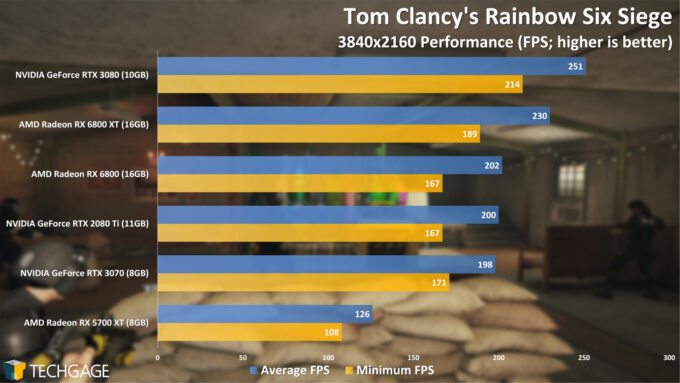 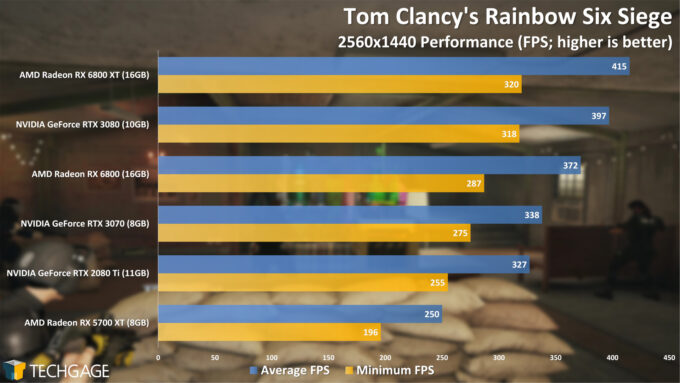 Siege is an interesting game for a number of reasons, but a technical one is that it doesn’t suffer nearly as much from a CPU bottleneck as most games. While our 1440p CS: GO result was uninteresting, Siege continues to show really good scaling. Yet again, we’re seeing the 6800 XT take the top spot – but only at 1440p. NVIDIA’s RTX 3080 takes the lead at 4K.

Based on these first nine games, AMD’s new Radeons perform exceptionally well, so it’s already becoming easier to conjure up some conclusions. But – we still have a lot more to go. On the next page, we’re going to take a look at the ray tracing performance of Big Navi with four DXR-equipped titles.