For the latest round of power consumption testing, we’ve decided to use a Blender project render to help push these CPUs using a realistic workload (rather than a power virus). We’re not testing for temperatures, as we’ve not found a truly reliable way to do so without casting doubt in our minds about some of the results.

It’s important to note that these results are for the entire PC, which is plugged by itself into a Kill-a-Watt power monitor. Fortunately, this is a stable workload, so getting a peak load value is easily done. We capture the idle power use five minutes after booting up, and the load wattage ten minutes into Blender’s Classroom render. 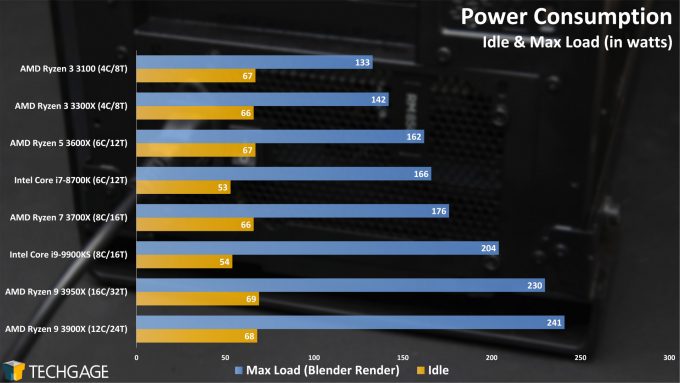 We couldn’t finish off the review without one more odd result, and that in this case is the 3950X using less power than the 3900X. This was such an oddity, that we had to reinstall both chips just to sanity check, and sure enough, we got the same result the second time around. This reminds us of how we see NVIDIA’s GeForce RTX 2070 SUPER occasionally outperform the bigger 2080 SUPER in some GPU compute tests.

Nonetheless, both the 3100 and 3300X (not surprisingly) lead this test, sipping the least amount of power overall. We do have to say, though, that 16-cores at 230W is really impressive, considering 4-cores hits 142W. If a GPU were added into this render, it’d of course increase power usage more, but we’re still impressed by just how powerful and power-efficient today’s hardware is.

It’s sometimes just as much fun to take a look at budget gear as it can be top-end kit, something these new Ryzen 3 chips prove in spades. In some ways, we can’t believe how much power can be had for such an affordable price nowadays. Ryzen’s introduction in 2017 brought us quad-cores with eight-threads, and now that feature set has trickled down to Ryzen 3.

Both of these chips offer a lot of value, but as we’ve said before, the 3300X is almost a no-brainer considering it’s clocked a bit faster, and has a more efficient internal design – all for just $20 added to the price tag. If you are doing no gaming or don’t care about our reported performance deltas, the 3100 will still suit many people just fine. 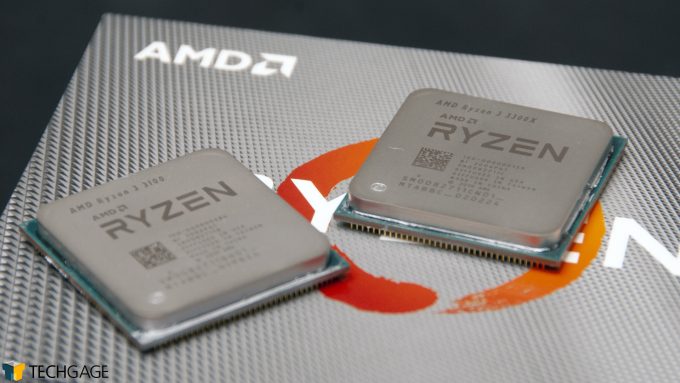 Of course, while the 3300X is the better of the two chips for gaming, we wouldn’t suggest targeting a quad-core unless your budget dictates it. Ideally, eight-cores should be the minimum for serious gamers nowadays, or six-cores for more casual gamers (even if a game won’t use six cores, you don’t want to be giving your PC the bare minimum to work with.)

At the time we received these chips, the B550 chipset wasn’t available, but since we drug our heels unreasonably, that has now come to market. So, if you want the best value with either of these new Ryzen 3 chips, you should target that platform. You will forego some features, like system-wide PCIe 4.0, but when the chip in question is $100, those losses are not much to cry over.

We’d have to say this is one of the more exciting Ryzen launches of this generation, since the unlocking of threads on these quad-cores is helpful, as is the increase of cache. Then we also have increased efficiency and better performance over the previous gen. Now all we can think of are APUs with integrated graphics using Zen 2, but such a thing might not come for a while, since 3400G already exists, and don’t use Zen 2. At least the current selection isn’t exactly lacking, though.