We might have mentioned it already, but this month has been intense for benchmarking. We kicked it off with a look at Intel’s Core i9-9900KS, and that already feels like forever ago now. After that, we rolled out two updated test suites at once, kicking them off with our look at the Ryzen 9 3950X in both Windows and Linux.

Intel then launched its new Core X-series, and we rolled out more Windows performance for that, and then hopped in Linux to greet the new Threadrippers. Oh – let’s not forget that we also took a look at AMD’s new Radeon Pro W5700, and NVIDIA’s GeForce GTX 1660 SUPER. Takes deep breath. 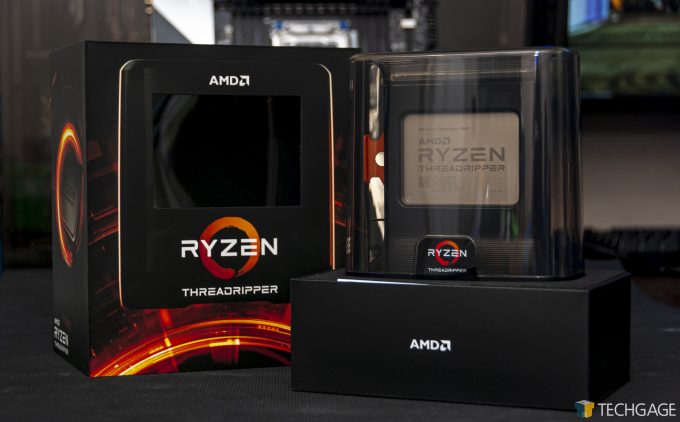 Fortunately, this review is going to be an easy one to write, largely because we’ve already tackled these new Threadrippers before. And, due to this being written ahead of travel in the AM, we’re going to get through this front page a bit quicker than normal.

Let’s at least tackle the basics. For this Threadripper launch, AMD is likewise launching a new socket, TRX40, which means that old Threadrippers will not work in these new boards, and the new Threadrippers won’t work in the old ones. We all know that AMD truly loves backwards-compatibility, so we forgive it for this shift. We just hope you’re happy to splurge, because opting into this platform is not cheap. Somehow, it’s actually refreshing to see a different face behind the desktop premiums for once.

Before we go too much further, here’s AMD’s current Ryzen lineup:

AMD has decided to bump the price on its 24- and 32-core Threadrippers this generation, and as our performance results are going to show, it’s rather hard to complain about. After all, not everyone needs the biggest chips. The Ryzen 9 3950X in itself is a fantastic chip that is found on a more affordable platform. If you need as many cores as Threadripper can offer, you know it already.

The reason for the premium is clearly tied to the vast improvements made. In years’ past, we’ve regularly talked about single-digit percentage gains from one generation to the next, for either AMD or Intel. With Zen 2, performance got a jolt in the arm, and with all design quirks of the last-gen Threadripper gone, these new models are much easier to recommend to anyone who needs a top-performing CPU, regardless of their workload. There are of course some exceptions, though they are rarer than usual here. 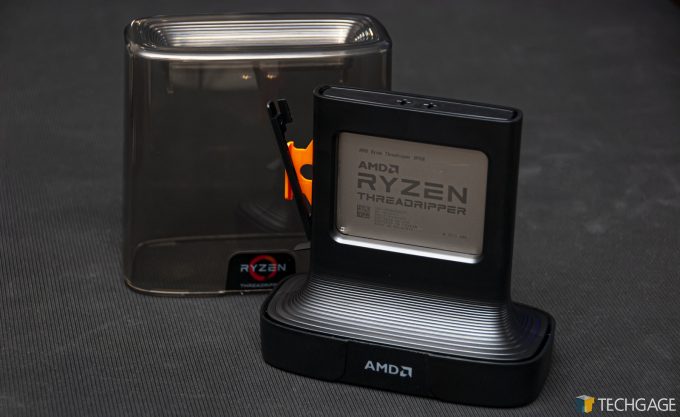 The new Threadripper packaging is fairly interesting, not quite as grandiose as the previous generations, and that’s probably a good thing. After opening the box, you can lift out its CPU holder, which can have its plastic cover lifted upwards off of it. A little lever can be pulled down and removed, at which point the CPU can be slid out.

A downside with this new packaging is that AMD did not include convenient CPU holders for storing the chips for later use. This is definitely a #BenchmarkerProblem, but we haven’t had any issue storing our CPUs up to this point. For the regular user, the packaging is juuuuust fine.

Inside the box, AMD includes its Threadripper Torx screwdriver (with torque limiter), a sticker, and a bracket for a CPU cooler, if it’s required (it was with our NZXT Kraken X62). 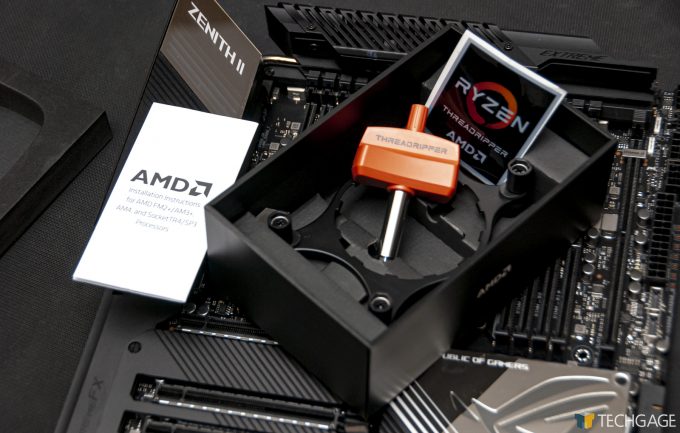 We received two motherboards for potential inclusion, and we chose ASUS’ ROG Zenith II Extreme to run with first, since in terms of dealing with quirks, ASUS has been kindest to us. When diving into testing, we didn’t pay any attention to the motherboards, simply due to time. We didn’t realize until writing this that the boards available are pretty pricey, with models most commonly starting at ~$500. 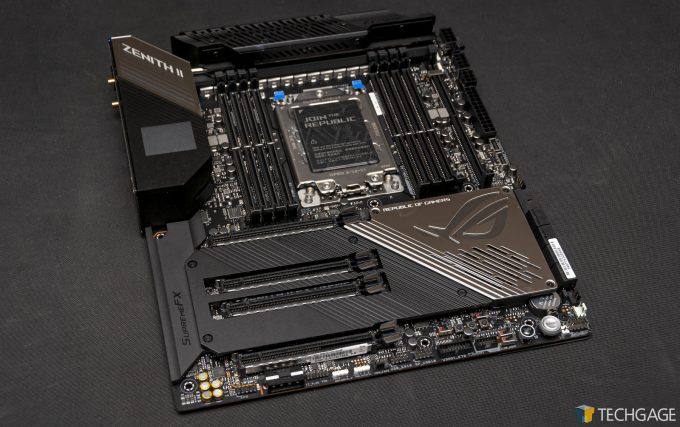 We can’t speak too much to the quality of this particular board yet, but as it retails for $849, we’d sure as heck hope it’d be built to stand the test of time. By far, our favorite feature so far is the new BIOS OLED screen built-in, which actually lets you see what hardware is being engaged, or what part of the boot process it’s at. This is a lot better than seeing a two-digit readout that Google can barely help with. It also doubles as a temperature readout during normal use:

As mentioned above, we’re going to speed through the intro here more than we’d like, but we wanted to make sure this review got live before we wound up out-of-pocket for a week. There’s no shortage of benchmarks to be had, though gaming has been skipped over for now (not that it’s a particular focus of these Threadrippers to begin with, but we still wanted to explore).

On the next page, you can peruse our test systems and methodologies; or jump straight to the tests on page three.