Well, well, well… what do we have here? After months of wondering whether or not the Radeon Pro series would be treated to a Navi GPU, the 8GB W5700 hit our doorstep, begging to be benchmarked. As the name might suggest, the W5700 is based on the same GPU powering the RX 5700. Notably, we didn’t mention “XT” there, which leaves room for AMD to release a follow-up (perhaps with 16GB of memory?)

It might seem obvious that Navi was going to wind up as a Radeon Pro card, but messaging around the Navi launch could have made it seem like Vega was going to be the only way forward. As far as we understand it, Vega is going to be focused more on enterprise work, whereas Navi will take over the reigns for RPro.

We believe that in some cases, Vega is going to outperform Navi, but that’s mostly in workloads that the Radeon Pro series doesn’t necessarily target, like compute. In our launch news post, we mentioned that AMD’s internal testing showed the W5700 to beat out the WX 8200 in a handful of workloads, despite that card’s use of both Vega and HBM2 memory. 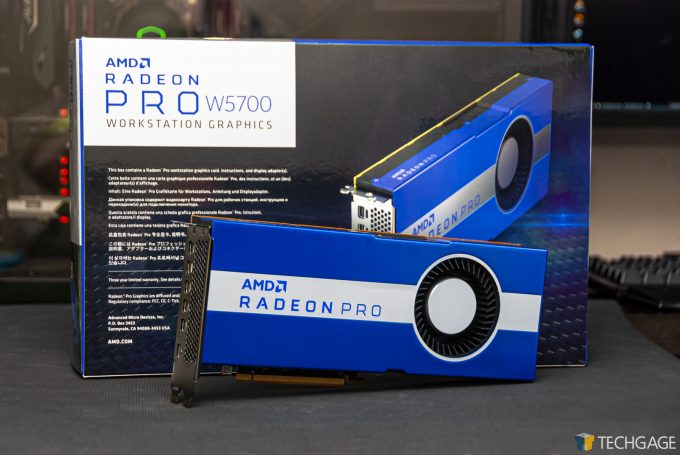 We continue to have the worst luck in the world, as a couple of months ago, our own WX 8200 decided to stop working, so we won’t have that comparison here. We will however have the even more relevant comparison: Quadro RTX 4000. In addition to those, we’ll also compare against the Radeon Pro WX 7100, WX 5100, RX 5700 XT, Quadro P2000, and GeForce RTX 2060 SUPER. We hoped to include more to paint a fuller picture, but CPUs have been dominating our benchmarking time.

Over its gaming counterpart, the Radeon Pro W5700 delivers optimized drivers for workloads that are important to designers. In some cases, this improves performance, while in all cases, the goal is to deliver unparalleled stability. In the case of RPro, 10-bit OpenGL support is offered for all applications, which contrasts to regular Radeon, which holds it back. We hope that AMD ends up enabling full 10-bit support on all of its GPUs at some point, as NVIDIA has done with its own, so that we don’t have to think about whether someone has it or not.

The W5700 requires a 6- and 8-pin power connector, and for video, there are five mini-DisplayPorts, and also USB-C. We would have loved to have seen regular DisplayPorts here, since adapters / dongles are a chore – but that’s only really for us, who swap components all of the time. AMD kindly includes two mini-DP to DP adapters, and one DVI to mini-DP adapter in the box.

Another thing worth pointing out about this card is that it’s built around PCIe 4.0, providing much higher bandwidth over 3.0. In the real-world, and for the vast majority of ProViz use-cases, PCIe 4.0 is not going to offer a single noticeable benefit. Where that will change is with the use of 8K uncompressed video, which can actually take advantage of all of the gained bandwidth to ensure smoother playback. PCIe 4.0 will benefit storage more than anything, at least right now. 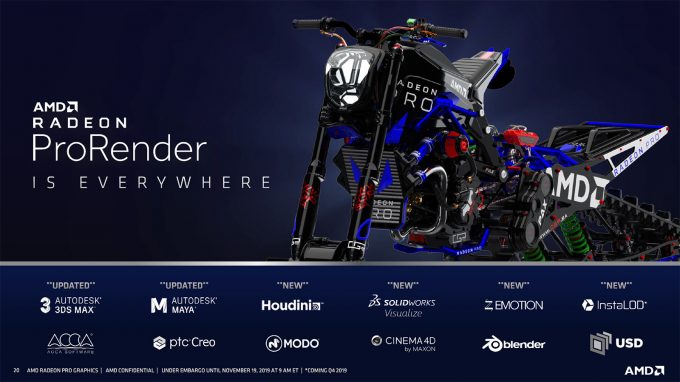 There’s a lot more to Radeon Pro than just the hardware. Over the past couple of years, AMD’s had strong momentum with its Radeon ProRender engine. The company had a lot to talk about during SIGGRAPH this past summer, and now, it’s doling out even more good stuff. A handful of plugins have released new versions, including 3ds Max, which has been without an update for a while. There’s also new support for Houdini, SolidWorks Visualize, Z Emotion, as well as InstaLOD. It’s great to see some good progress here. 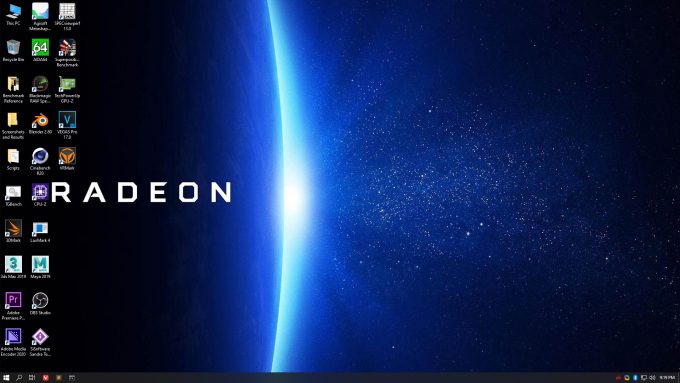 A review like this would ordinarily include more performance results than it does, but we were roadblocked with some tests we wanted to run. We’ve been without working Radeon ProRender projects since the spring, and for whatever reason, we can’t get SiSoftware’s Sandra to work with Navi. Some have had success, but for some reason, we keep getting GPU call fails. The other missing application is MAGIX Vegas Pro, as it doesn’t support Radeon Navi right now at all. We’re told the next build should include support for it, and we hope that’s the case, as the first GPUs have been available since July.

Here’s the specs of our test rig:

Our benchmark results are categorized and spread across the following four pages. On page 2, we’re taking a look at renderers with the help of Blender and LuxMark. Page 3 is home to our encoding tests, which are handled by Adobe’s Premiere Pro, BRAW Speed Test, and an application we just happen to throw into the same pile: Agisoft’s photogrammetry tool, Metashape. Page 4 handles viewport performance across a range of popular suites, and finally, page 5 tackles some simple gaming.