Since AMD launched its Navi architecture in July, we’ve seen the release of the gaming-focused Radeon RX 5700, RX 5700 XT, and RX 5500, which was announced just a few weeks ago. Now, Navi has hit the workstation, with the first product coming to us in the form of the Radeon Pro W5700, a card that’s closer in spec to the RX 5700 than the RX 5700 XT (which surely means more are coming!) 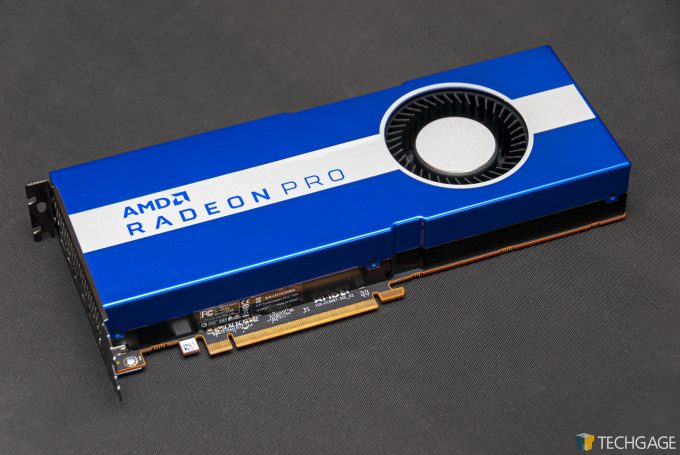 We’ve been testing AMD’s new W5700 in the lab, but have been overwhelmed with the amount of benchmarking that needs to get done across-the-board. On that note, don’t miss our quick look at the Ryzen 9 3950X in Windows, and our in-depth look at it in Linux. We’re currently testing a seventh GPU for a fresh round of workstation GPU results, so we’ll be able to finish things up soon, and get a full review posted later today.

While the Navi architecture is AMD’s newest, the older top-end Radeon Pros might end up proving more efficient for certain tasks, since the Vega architecture has proven to be a compute beast. Unfortunately, our WX 8200 gave up the ghost a few months ago, which is unfortunate, since it’s priced similarly to the W5700. We’re currently working on continuing our workstation GPU testing to do another proper roundup in a few weeks, so performance for more GPUs will be coming.

That all said, the W5700 features non-ECC GDDR6, and 8GB of it, matching its closest competition, the Quadro RTX 4000. Shaking things up from the WX 8200, one of the six mini-DisplayPorts have been removed at the back to be replaced with a USB-C connector, great for VR use or simply adding a USB-C port to your machine (though it’s standard nowadays).

As the W5700 has 2304 cores just like the RX 5700, it means that neutral benchmarks are going to show it performing behind the RX 5700 XT, although when the workstation optimizations kick in, such as with viewport performance in the big CAD suites, the W5700 will manage to separate itself from regular Radeon in many cases. If AMD is to deliver a Radeon Pro card built around the RX 5700 XT’s 2560 cores, perhaps that card would also bundle additional memory in. 8GB is certainly apt for the majority of workloads today, but overall, workloads are only becoming hungrier for memory. 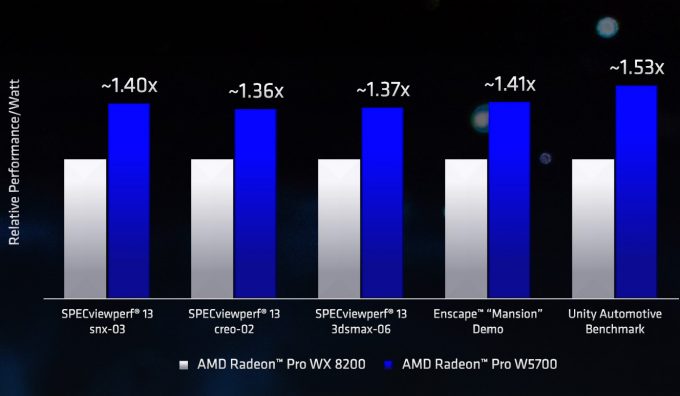 We spoke before that the WX 8200 costs about the same as the W5700, which makes it seriously unfortunate that we can’t test it. We do have WX 9100 results coming, along with other relevant GPUs. In the shot above, AMD itself is saying that the WX 8200 is falling to the wayside to let the W5700’s dominance come through. We’d wager that if these tests carry over to the real-world, then that would mean the W5700 could actually match the WX 9100 in some cases. For raw compute tasks, though, we still feel Vega has a chance to shine.

And with that, we’ll end the post here so that we can go focus on wrapping the actual review up, while CPUs continue to benchmark to the side to help fill up the rest of our Windows CPU testing. To think, there’s new Core X and Threadripper next week. We’re keeping really busy with benchmarking lately!