To generate power-draw results for our collection of CPUs, we plug the test PC into a Kill-a-Watt for real-time monitoring, and stress the CPU with the help of our HandBrake x264 test (which can peak 100% of cores in our tests). Idle power consumption is measured about 5 minutes after boot, once Windows decides to calm down and the wattage reading keeps stable. 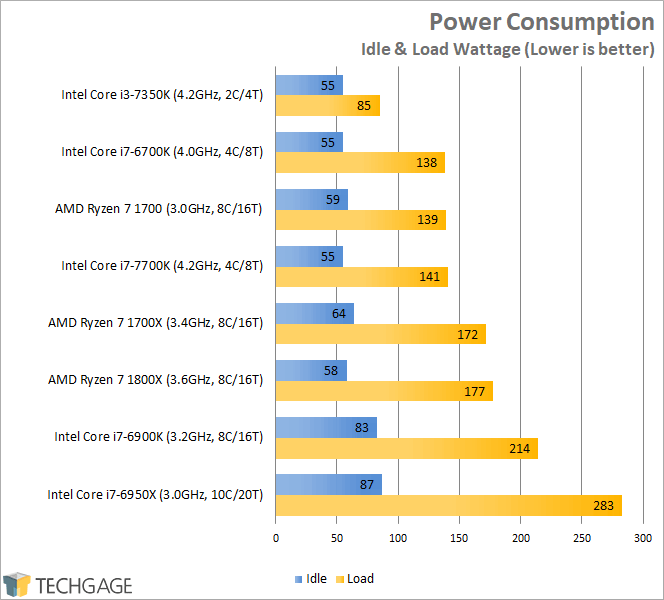 Ryzen has proven impressive in more ways than one throughout this review, and I admit I didn’t expect one of those ways to be with power, despite the TDP ratings (so often, those don’t align in real testing). The 1700, which is faster in many cases than the 7700K, uses about the same amount of power, on average. The big gun 1800X might give an even more impressive result: its configuration drew 25W less at idle, and 37W less at peak load, versus the 6900K.

When Ryzen launched on March 2, it wasn’t ready. Motherboard and cooler vendors alike were freaking out ahead of launch due to the lack of time available to deliver a polished platform. A new platform lacking polish isn’t uncommon (far from it), but I had never seen a launch this rough in Techgage‘s 12 year existence.

Today? The platform is a lot more stable. Still, there’s room for improvement, and fortunately, those improvements are being made all of the time – both with the EFI, and software (AMD recommends using its custom power profile until architectural fixes come to Windows). 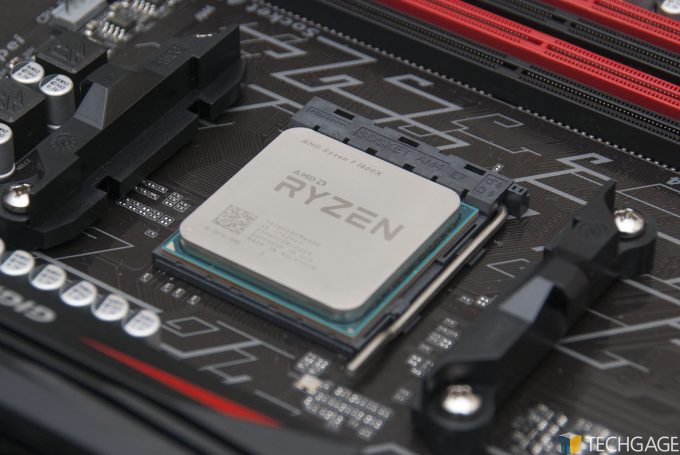 Still, it’s telling that when AMD sampled its new Ryzen 5 chips, it gave reviewers specific DRAM settings to apply in the EFI and requested that the HPET (high-precision event timer) be disabled. I didn’t find any of that to be necessary with our ASUS CROSSHAIR VI HERO, but it does highlight that you might have to tweak a bit if you want the best possible performance (and perhaps stability) out of your Ryzen system. At least for now.

At the same time, all of this testing was done with a modest Noctua cooler with a single fan. This is the cooler AMD itself sent for testing, so it’s what I stuck with. However, I do feel like Ryzen could have been throttling at certain points, where big enough deltas required me to test three or four times. Since I had used Corsair’s H100i v2 on all of the Intel chips, I had hoped to be able to get an AM4 bracket for Ryzen testing, but even a month after launch, it’s still not available. Our friends at Gamers Nexus took a look at this issue in detail.

That all aside, Ryzen as a whole performed very well throughout most of the tests in this review, and if it managed to do that while running on a modest cooler, I can only imagine that further EFI updates and the addition of liquid cooling could improve its peak performance even further. Once an AM4 bracket becomes available for our cooler of choice (or, if that never happens, we’ll get a different cooler), all of Ryzen will be rebenchmarked.

If you want to go the liquid-cooled route right now, your best option is likely NZXT’s Kraken series. Unless you already have one, you’ll have to request the bracket after purchase (but for free).

NZXT’s Kraken series is compatible with AMD AM4

Given the state of the AM4 platform at launch, it would have been hard to recommend Ryzen at that point, because it simply wasn’t stable. For that reason, it sucks that AMD had to stick to that launch date, but it is what it is, and what Ryzen’s become since then is good.

Ryzen 7, on the other hand, can prove to be a dream for anyone involved with creative workloads, or an enthusiast who finds themselves rendering or encoding often. Ryzen’s IPC is unable to touch Intel, but those extra cores can help even the 1700 beat out Intel’s 7700K, as seen in many tests. Where the 7700K reigns supreme is with its IPC improvements and 4.2GHz base clock, giving it a definitive single-threaded lead.

If I were a creative professional, I’d take Ryzen very seriously. The results on page 3 and page 4 give the reasons why. Whether splurging extra on the 1800 or 1800X is worth it is really something you need to determine yourself, based on your use case and the results on the previous pages.

Ultimately, the Zen architecture may not best Intel in IPC and gaming, but it more than makes up for that shortcoming with its multi-threaded prowess.