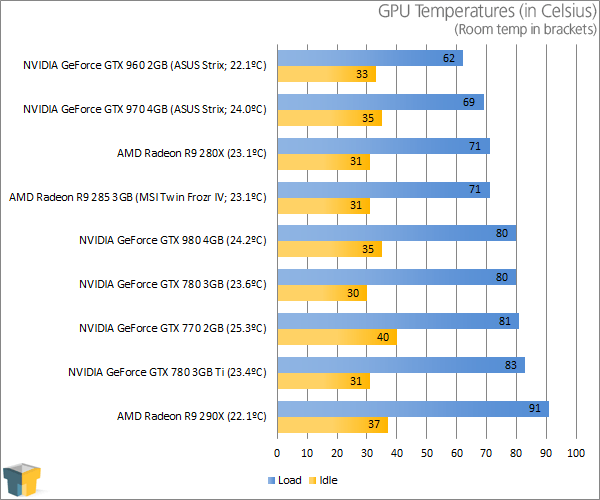 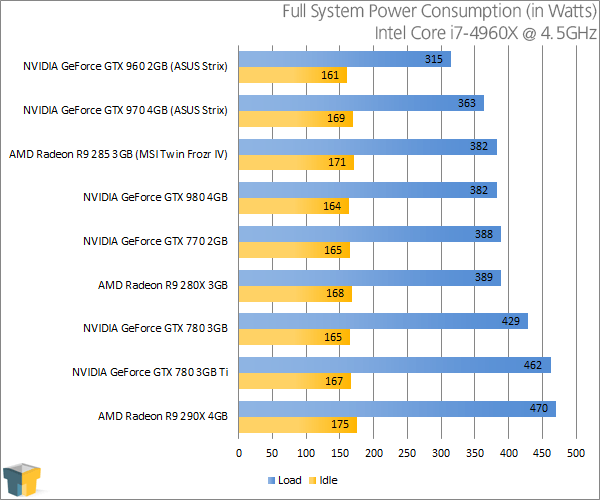 Given what we saw from both the GTX 980 and 970 in terms of power and overall temperature, the GTX 960’s results don’t come as a surprise. Of all the cards we tested, it’s the most power-efficient and the coolest-running. Power consumption doesn’t matter to everyone, but it’s still notable that NVIDIA was able to shave 67W off of the R9 285’s power draw but deliver the same (or better) performance.

NVIDIA’s GeForce GTX 960 is an easy card to sum up, something I’m thankful for considering I only just received our sample late on Monday (I just have to live in eastern Canada, don’t I?).

When I evaluated AMD’s Radeon R9 285 in September, prior to NVIDIA’s Maxwell launch, I liked what I saw. In fact, I gave the card one of our Editor’s Choice awards. It had some of the typical downfalls AMD’s suffered in recent years (power consumption, temperatures), but for its price-point, it offered some great performance – on par with what we now see from NVIDIA’s $199 GeForce GTX 960.

Today, an R9 285 can be had for $230, or even less if you want to mess around with mail-in rebates. But price isn’t the only thing NVIDIA beats AMD on with its GTX 960. NVIDIA’s competitor draws much less power, runs cooler, and features a number of useful features that came with Maxwell, such as memory compression and multi-frame antialiasing. Maxwell’s dynamic super resolution (DSR) is also notable, but with last month’s massive Radeon driver update, AMD’s begun offering a similar solution.

On the overclocking front, I don’t have too much to report. It seems that with the GTX 960, success is hit-or-miss, although you’re pretty much guaranteed to hit a clock well beyond stock. The Strix card I tested peaks at about 1,400MHz with GPU Boost at default settings, whereas my overclock pushed that to about 1,500MHz (dialed to 1,440MHz in GPU Tweak). This resulted in a gain of about 3 FPS in most games – not entirely impressive given the gains we saw from overclocking both the GTX 980 and 970 – but, the lack of impressiveness does owe most of its thanks to the Strix’s factory overclock already pushing things well beyond reference. Nonetheless, I’ll be able to make better sense of the overclocking abilities of the GTX 960 once I get additional samples in.

So, there we have it. The GTX 960 is as fast as the more expensive R9 285, draws far less power, runs cooler, and offers the suite of benefits that Maxwell brings to the table. Given its price and featureset, NVIDIA’s done well here. If there’s a sticking-point, it’s the 2GB framebuffer. It almost makes me wonder if a GTX 960 Ti is en route which will feature a 192-bit bus and 4GB framebuffer to be priced at around $250. That sounds tasty.