To get a good look at the installed components, you can remove a few portions from the back. In order to swap any of the components out though, you will need to remove a lot more than this. First, the hard drive is located in the bottom right hand corner of the back, which corresponds with your left hand in normal use. You can see a metal guard here, which prevents you from even simply viewing product information. You cannot easily remove this, as each side of it has two small screws that are impossible to get at without disassembling the notebook. 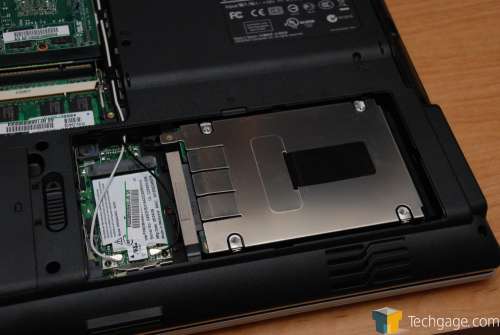 The CPU has a simple heatsink setup. Attached to the CPU is a thin heatpipe that runs to a fan which acts as an exhaust. This piece is also difficult to remove, despite it not looking so. There are four screws to remove the heatsink off the CPU, but there are multiple other screws on the other end which prevent complete removal. 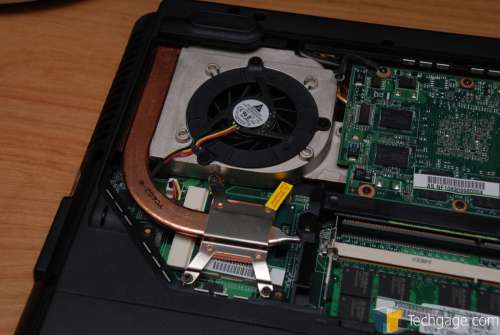 Here is the GPU, which has a fan beneath it to exhaust the warm air. The memory chips used are from Infineon, although this doesn’t matter as much in notebooks as it would on a desktop card thanks to lack of overclocking. 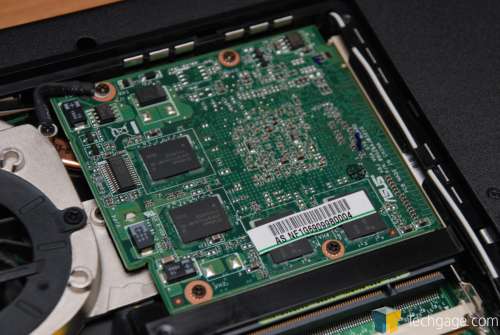 Finally, we have one stick of Elpida DDR2, rated for DDR2-667 speeds. There are two points to bring up here. First, there is only one stick of ram, so it will not function as dual channel. What this means essentially is that latencies will be slightly higher and bandwidth lower. However, I consider it to be more of a benefit than anything, because when the time comes for you to upgrade to 2GB, you won’t have to waste the memory you already have.

Many notebooks include two sticks of 512MB densities, but that means if you want 2GB down the road, they are technically wasted, since you need to buy two sticks of 1GB. So, it depends how you look at it. If you never plan on upgrading the ram, then 512MB x 2 would prove a better choice for slightly improved performance. 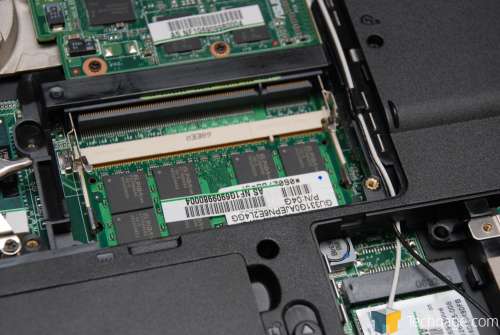 Now that we have taken a thorough look at the innards, we can finally turn it on!