Since November, we’ve taken a look at almost all of the current “budget” graphics cards available on the market, including AMD’s $130 Radeon HD 5750, and more recently, the company’s $100 Radeon HD 5670. Earlier this month, we went even lower-end with the help of Intel’s Clarkdale, which features its “HD Graphics” integrated graphics chip. There’s still a lot of track left for our budget train, so to help catch us up, we’re taking a look at the three lowest-end cards NVIDIA has to offer, all at once.

Of all the models available from NVIDIA’s current-gen (GT200) line-up, only three are available for under $100. These include the ~$40 210, which is so low-end, it doesn’t even deserve a GT, GS, or any other moniker. Moving up brings us to the GT 220, at around ~$60, and we finally reach the GT 240, which retails for around $90. All three of these cards can be had for even less if you take advantage of mail-in rebates.

Based on the pricing alone, you can pretty much jump to conclusions on their performance, and also which crowd they’re suited for. One obvious answer to that question is the HTPC crowd, but they’re also suitable for those who want graphics better than what an IGP can offer, but don’t want to spend over $100 on their cause. Currently, there are no models built with AMD’s current-gen architecture to compete with these NVIDIA cards, but they’re en route, and soon (by soon, I mean really soon).

Before we go too far into the article, it’s important to note that neither of these three models from NVIDIA are what most people would consider “new”, despite the fact that all three were released just this past fall. That might be the case, but over the past year or so, NVIDIA has become accustomed to re-releasing GPUs built on its previous-gen architecture, and sometimes, it goes back even further than just one generation. The 210 we’re looking at here? It’s based on G86/G98, also known as the 8400 GS. That card was released during the summer of 2007, to put things into perspective.

The architecture for the most part is the same, but the performance, and capabilities have been improved. The original 8400 GS was built on a 80nm process, for example, while the 210 is built on NVIDIA’s most recent 40nm process. Because of that improvement, the 210 is faster (thanks to boosted clocks) and will also see improved power efficiency, namely because of the die shrink. For interest’s sake, the 8400 GS consists of 210 million transistors packed into a 127mm^2 die, whereas the 210 consists of 260 million transistors and sees a much smaller die, at 57mm^2. 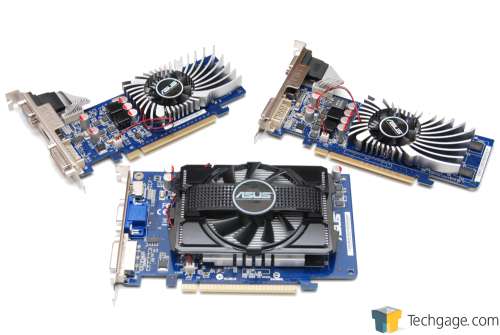 When each of the above cards were released, NVIDIA didn’t make it a point to sample them to too many sites, and for probably obvious reasons. The cards are all built on older architectures, and all are extremely low-end, so it’s hard to get too excited. But, I still wanted to get some in to take a look at, to help us, and our readers get a better understanding of all of the options out there. Huge thanks to ASUS for supplying us with all three models. It was a nice relief to not have to go out and hunt one card down from three different companies.

If you didn’t believe me up to this point that these three cards were all low-end, the photograph above surely helps me prove it. They’re simple, in both PCB design and with their cooling solutions. The 210 and GT 220 are particularly different, as they’re both low-profile, and not at all lengthy (~6.60″) and… perfect for HTPC use. The GT 240 is a bit beefier, but not by much. It’s much smaller than NVIDIA’s next step up, the GTS 250.

After benchmarking all three of these cards, I can say right now that the 210 is going to be designed for few people. It’s a step-up from integrated graphics, but not by much. The GT 220 is a huge improvement. It might still be a $60 card, but moving up to it from a 210 is like stepping out of a Pinto and into a BMW. The GT 240 is the highest-performing of the bunch, as would be expected. It doesn’t quite come close to matching the performance of the GTS 250, but it’s still a solid offering for <$100.

With these three models, NVIDIA’s entire line-up has been evened out, and it’s unlikely that we’ll see any more models added to the GT200 series in the future. Fermi is right around the corner (~March), so hopefully our next NVIDIA graphics card review will be of a model based around that architecture.

It’s also important to note that of the cards we’re taking a look at here, each of them have options to use DDR2, GDDR3 or GDDR5. Our GT 240 card uses the latter, but the 210 and GT 220 models ASUS shipped stick with DDR2. So, please bear in mind that if you score one of these cards with DDR3, you’ll likely see slightly better performance than what’s seen in our results pages. For what it’s worth, I reckon DDR2 will be the most popular configuration for both of these GPUs, as prices will be kept at their lowest because of it. 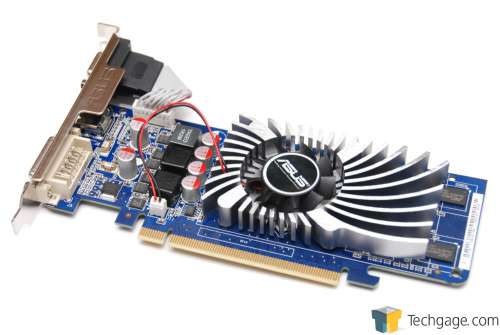 The card above, the GT 220, is just a quarter of an inch longer than the 210, and ASUS styled both of them to look almost identical. They feature a very simple aluminum cooler, with mini fan that surprisingly doesn’t make an audible whine during use. The reasons for this are no doubt due to the fact that the temperatures never get hot enough for the fan to feel the need to spin faster. 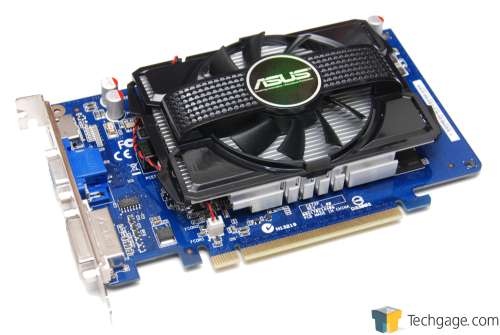 Performance-wise, the GT 240 is far beyond the 210, so it’s no surprise to see a much larger PCB, and also a more robust cooler. It might be just a step under from the GTS 250, but a huge perk is that no PCI-E power connector is required. Just pop it in, and you’re good to go. You have got to love simplicity like that!

On the next page, we’ll tackle our testing methodology. I highly recommend you take a quick look through, as because we’re dealing with such low-end cards here, we’re deviating from our regular game configurations just a bit. After that, we’ll dive right into our results!