If there’s one thing that’s more true today than ever, it’s that you can get some incredible gaming performance for not too much money. Taking a look at a GPU like a GeForce 9600 GT can prove that. At ~$80, it’s affordable for almost anyone, yet can handle some games with modest settings just fine at super-high resolutions, like 2560×1600. There’s definite value in GPUs today, and it’s great to see.

The next step-up from the previously-mentioned card is of course the 9800 GT, which features a slower core and shader frequencies, but almost doubles the number of cores, effectively giving us a card that’s close to being equivalent to the original 9800 GTX, save for higher frequencies. Given these specs, it’s hard to give a general percentage of performance increase we should see over the 9600 GT, but for the extra $20 the card costs, the value might be far greater.

As it stands today, there are four GPUs that cover this particular price-range. NVIDIA has their 9600 GT and 9800 GT, while ATI has their HD 4830 and HD 4670. Sadly, we don’t have either of the latter cards, but it’s likely safe to say that the performance differences between each card at its respective price-range shouldn’t be too great.

The card we’re taking a look at today comes from ASUS, and is directly battling against ATI’s HD 4830. Both cards hover around the $100 area, with some of the NVIDIA cards going even lower depending on the brand and mail-in rebate. Some at one particular e-tailer were selling for $85 after MIR… which offers further proof to just how much value can be had in today’s GPUs.

ASUS is a company that’s likely familiar to everyone, for varying reasons. The most important one is that generally speaking, most of their products are solid. We’ve had very few in our labs over the course of the past few years that have really let us down, and that’s rare to see from anyone.

The second reason might be the fact that the company produces more products than we can even keep track of. Because of this, the company has to keep conjuring up new ideas, throughout their entire catalogue. One of their product lines that has seen the greatest attention has been their graphics cards, and we’ve taken a good look at many of those in the past.

I first saw this “Matrix” card this past summer at Computex, and my first thought was, “Hmm, that’s unattractive.”, but over the course of the past few months, I’ve come to realize that… I was right. It’s not an attractive card, but like their 9800 GTX+ Dark Knight card we took a look at last month, the goal isn’t looks, but rather performance and cooling. 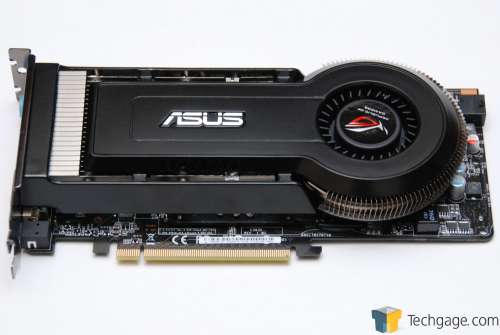 I might not personally find the card that attractive, but it’s all a matter of opinion, and you might disagree. What I do like is this “cool” looking fin array towards the end of the card. The leaf-blower fan inside sweeps air both through these fins and also towards the back. This is an interesting design, and one I like quite a bit. It allows more air to be pushed away from the card faster, rather than designs that only push it towards the back (like most current reference designs). 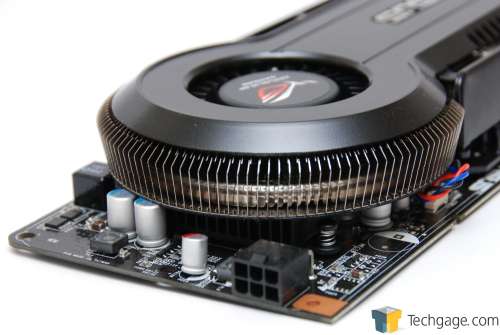 Connectors at the back include a TV-Out, HDMI and of course, DVI. For those sticking with VGA, an adapter has been included. Also interesting is the addition of an S/PDIF output. 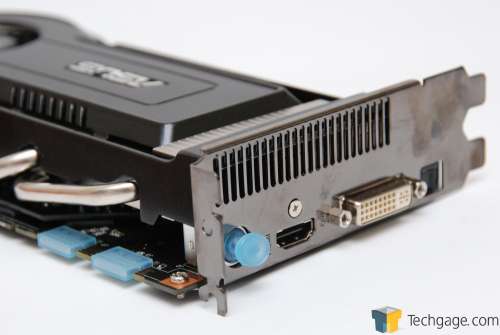 Taking a look at the side-view shot of the card, we can see there is a fair amount of airflow room available underneath the cooler itself. To the immediate right of the row of capacitors underneath the fan are three power phases. This is a feature we’ve seen only from Palit for quite some time, but it’s good to see others catching on. In some cases, additional power phases may do little for stock speeds, but it should greatly improve the chance of a higher successful overclock. 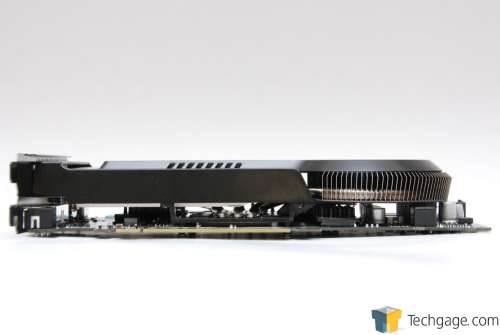 With a look at the card out of the way, let’s take care of the testing methodology on the next page and then kick right into our results, starting with one of the most system-intensive games ever, Crysis Warhead.