Late last fall, as both SATA 3.0 and USB 3.0 products were ramping up in production, a couple of motherboard vendors decided to take the opportunity to usher in the new technologies in style. What resulted was Gigabyte’s X58A-UD7 and ASUS’ P6X58D Premium. If you’re familiar with either company’s naming schemes, the model names alone will tell you that we’re dealing with a high-end product.

ASUS’ board is the lesser-expensive of the two, at $300. Gigabyte’s is $350, which owes its thanks to the built-in Northbridge water block. The fairer comparison would be Gigabyte’s X58A-UD5 at $290 which is almost the exact same board but lacks that feature. That model happens to be the one driving my primary PC and so far I’m very pleased with it.

As a high-end model, the P6X58D Premium includes pretty much everything you need, and most likely a bit more on top for good measure. While the board does tout great overclocking, and even “extreme” overclocking, like all Premium models this one is designed to be the ultimate all-around board. If you’re what you’d consider a hardcore overclocker, ASUS’ Rampage or Maximus boards might better suit you.

Although the P6X58D came to market a couple of months prior to Gulftown, Intel’s six-core processor architecture, ASUS touted full support upon its release. While all of the benchmarks in this article stick to benchmarking with the Core i7-965 as normal, we opted to use the Core i7-980X for the sake of overclocking.

Right off the bat, I have to say that I love the look of this board, and it’s as though ASUS pinged me for tips on a color scheme (it didn’t) because it pretty much aligns perfectly with my tastes. Of course, color means absolutely nothing if the product doesn’t deliver, but when the aesthetics are nice, it’s a sweet bonus.

Aside from looking good, though, the board features a smart layout as we’d expect, with heatsinks that offer a good blend of efficiency and size. You shouldn’t have any trouble installing a huge CPU cooler here (although true beasts like this could pose a potential issue for the RAM slots… but that’s not the fault of the board). 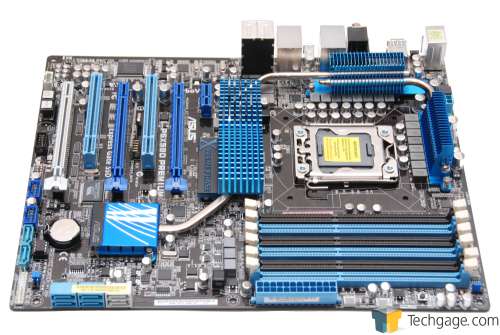 Speaking of RAM slots, here we can see the six included on the board. One thing you might notice is that for some reason, ASUS didn’t opt for the newer design of the tabs, as we saw with many of its launch P55 motherboards. It’s certainly not a big issue, but it’s an oddity nonetheless (given that this board came out around the same time as the company’s P55 models). 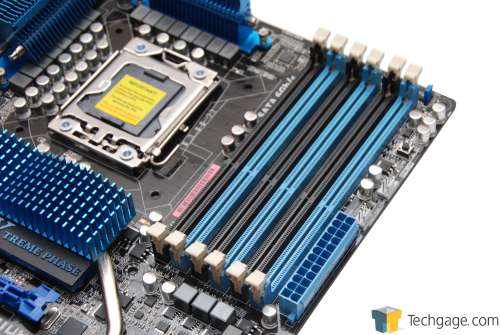 For PCI expansion, ASUS has included three x16 slots for triple-GPU capabilities, a single x1 slot and also two legacy PCI slots for any audio cards or other components you may have hanging around. At this end of the board you can also see the on-board power and reset buttons. Towards the right-hand side of the photo, you can also see two SATA ports. The location of these could be considered good or bad, since it really depends on your personal needs. 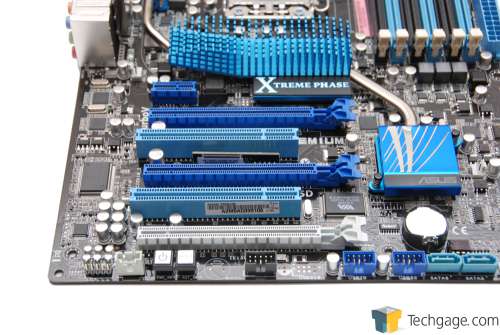 The other six SATA ports are found in the bottom right-hand corner of the board as you’d expect, and thankfully, all are vertically-mounted. If you’ve ever built a PC with these, chances are good you’d never want to go back to the old-school positioning. The two additional ports found at the bottom of the board don’t use vertical positioning, as that method would be useless for most chassis models. 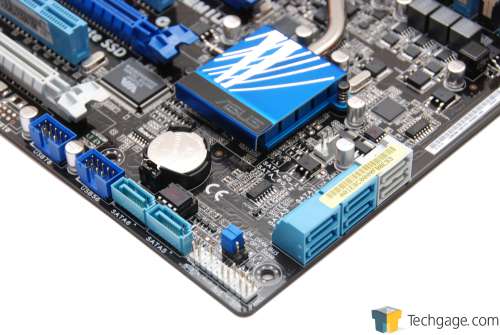 Again following the latest motherboard trends, the P6X58D not surprisingly is replete with power phases. These are placed in a 16+2 fashion, with the 2 being dedicated to the memory and QPI bus. Generally speaking, the more phases, the better the stability (there is a point of diminishing returns, however), which is key for hardcore overclocks. 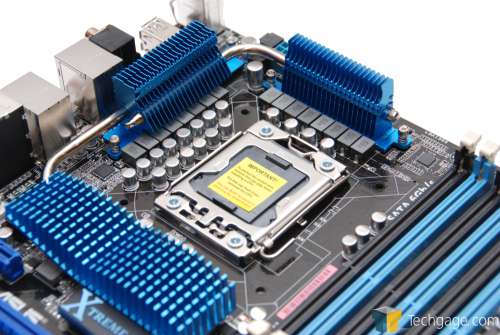 As a higher-end board, it’s no surprise to see the back I/O panel to be chock full with pretty well every popular peripheral port connector. For those sticking to PS/2 peripherals, you’re all set here, and for new-school, there are two USB 3.0 ports for the taking (which are backwards-compatible with USB 1.0 and 2.0). In addition to these, there are 4x USB 2.0 ports, a FireWire, dual LAN ports and of course the audio. Next to the two PS/2 ports is a very small CMOS reset button (it’s small so you don’t accidentally hit it). 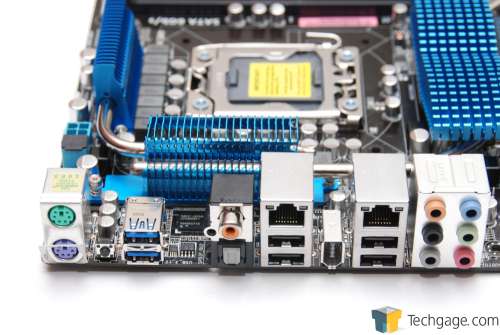 In addition to the manual and driver CD, ASUS packs in a heatsink fan, should you want to use it (you likely won’t need to, even with overclocking), 6x SATA connectors, an internal bracket that opens up two more USB ports and an eSATA port, and also a 3-way SLI bridge and CrossFireX bridge. If you’re thinking of going with a 3-way GPU configuration, it’s important that your chassis supports it as well, as when installed, the bottom GPU will in most likeliness require a few inches past the bottom of the board. 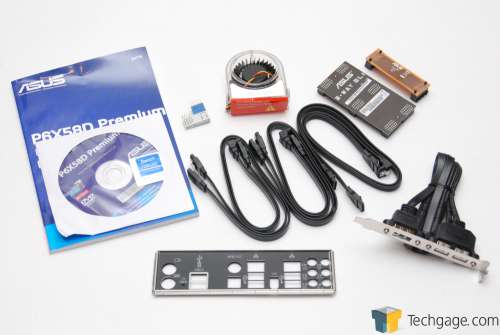 And there we have it. There’s nothing much in the way of bling on this board, which isn’t entirely typical of ASUS. In the past we’ve taken a look at Deluxe and Premium boards that have included various accessories, but here, there’s nothing. There doesn’t really need to be, though, and at $300, I am quite certain it’s less expensive than the aforementioned boards were at the time of their release.

On the next page we’ll take a look through the BIOS, and then we’ll move onto a look at our benchmark results.