With the case itself examined, the installation of hardware into the Vento is our next step. With the raised pieces on the motherboard tray, there isnâ€™t any need to screw in stand offs so all there is to do is install the I/O shield and then secure the hardware onto the chassis.

With the tool less PCI brackets, the installation of the audio card, Sapphire x1900 XTX and Asus PhysX card are installed without problems. Simply press the black plastic back, install the card and rotate it back into place until it locks. Itâ€™s simple and to the point and the plastic pieces feel far sturdier than the Cooler Master i930 that we took a look at a few weeks ago. 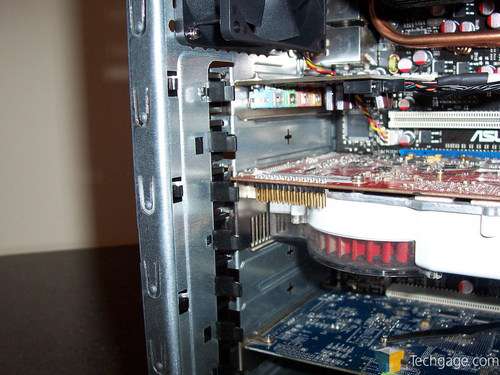 With everything installed, we quickly recognize the convenience of a modular power supply but thatâ€™s for another article all together. The hard drives are mounted 90 degrees from what is normally their place in other cases and the top, unless full of optical drives, is more than roomy enough to hide the extra power supply cables should you not have a modular PSU.

With everything in place, it does look cluttered but with a side panel that lacks a window, there really isnâ€™t a need to take extreme care in cable management. This is of course up to the discretion of the builder but for sake of time, the hardware was installed and left. 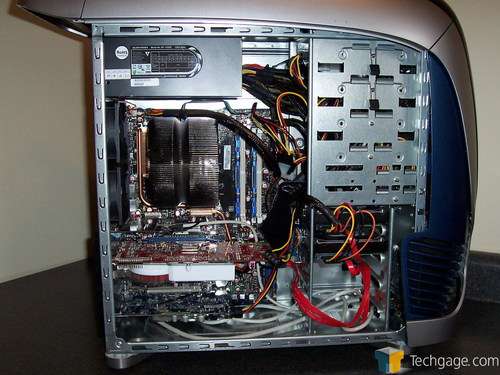 With everything installed, the PC was powered on and left for an hour. After that time the temperatures of the CPU and the Video card are recorded. This is repeated again with the CPU and GPU fully loaded and those temperatures are recorded as well. Before we get to the results, the hardware used in the testing of the Vento 7700 is:

We are using the same hardware installed in a Thermaltake Kandalf chassis as a comparison. The Kandalf uses a pair of 120mm fans, one in the front and one in the back, as well as a single 80mm fan at the top to move air into and out of the case. The results are pretty much spot on with what we thought they would be.

The reduced air flow of the single 80mm fan in front clearly hurts the overall temperatures but it should be stated that while higher, the Vento easily kept the E6600 at a reasonable temperature. When the x1900 XTX temps were recorded, it was more of the same. The x1900 is a hot chip to begin with but in our tests, the Vento was again, slightly behind the Kandalf. 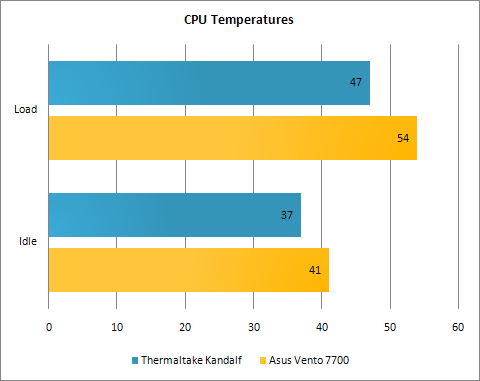 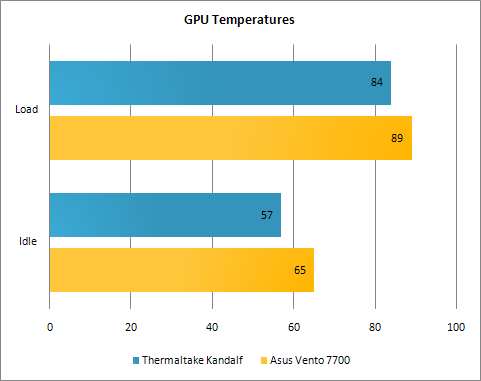 Our experience with the Asus Vento 7700 was a pleasant one overall but there are certainly a few things that we would like changed. In my opinion, there really isnâ€™t any reason to use 80mm fans. The Vento is specifically marketed towards gamers with itâ€™s aggressive design and unique features. Itâ€™s a pretty safe bet to say that gamers, above all other users like to use the latest and greatest hardware and unfortunately, new hardware more often than not means hotter hardware.

One can look to each new GPU that comes out to confirm this unfortunate trend. With that said, the use of 80mm fans is absolutely silly and unneeded. Heck, the first Vento had a 120mm in the backâ€¦ what happened Asus? With that out of the way, the rest of the case is great. The handles are an incredible feature that anyone who attends LAN parties can immediately see as a benefit. The tool less design is a solid one and aided in the installation of the hardware used in testing.

Finally, the front door, which was a favorite of many on the first Vento, is completely bad ass. My only complaint with it is that it could extend up a bit more. With it as it is now, if a CD or DVD drive is installed at the top, the door can partially block the ejected tray.

All in all, the Asus Vento 7700 is good case that with some redesigning, could be great. I am a bit hesitant to recommend anyone who isnâ€™t completely in love with the looks of the case because not only is the airflow poor, but the price of $130 (US) is a bit steep as well. I personally dislike aluminum cases greatly because they feel flimsy but in the Ventoâ€™s case, all of the molded plastic on the outside add a great amount of rigidness to the case and this is welcome in my book. Taking everything into consideration, the Asus Vento 7700 gets a 7 out of 10.