We took our first look at the ASUS Xonar range of audio products with the Xonar D2, which we reviewed in September of last year, and the first impressions of ASUS’ approach to high-quality desktop audio were highly favorable. However, the first round of Xonar parts, the D2 and D2X sound cards, were decidedly high-end parts, commanding a high-end price as well, though priced competitively in relation to Creative’s top-end Sound Blaster X-Fi Elite Pro.

I was responsible for that first review of the Xonar D2, and as I tried to gauge our visitors’ responses to the product, I soon found that while enthusiasts were impressed by ASUS’ initial Xonar product offerings, they longed for a budget-conscious offering. ASUS released the Xonar U1 soon afterward, an affordable external USB sound card based on the same C-Media chipset as the other Xonar products, but the void of an affordable, high-quality Xonar card still remained.

In response to the continual requests for a value-oriented Xonar product, ASUS developed the Xonar DX sound card – a budget-priced card which contains much of the same technology as the reference-quality D2 and D2X cards, but with a few tradeoffs made in order to keep the cost low. These tradeoffs are primarily in the area of component quality.

Where the Xonar D2 and D2X used cost-no-object reference-quality Burr-Brown DACs and opamps in the output stage for all seven channels, the DX uses components more typical of the mass market offerings from Creative, Sondigo, Razer, and others. We’ll explore these differences in more detail later. 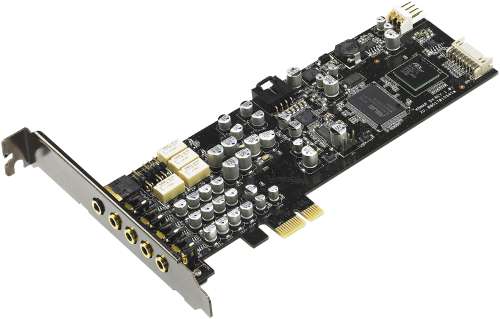 The Xonar DX also differs from the D2 and D2X cards in its form factor – while the D2 and D2X are full-height cards, the DX features a low-profile design that allows it to fit inside some smaller home theater PC cases. It also leaves the PCI bus by the wayside, offering only a PCI-Express version that occupies a single 1x slot. It claims a lower 116dB signal-to-noise ratio, but only on the front left and right channels, following the rating convention used by many other high-profile sound card manufacturers.

The ASUS Xonar DX sound card debuts with version 2.0 of ASUS’ DirectSound 3D Gaming Extensions (DS3D GX), a competitor to Creative’s EAX. In fact, ASUS’ claims that DS3D GX 2.0 could duplicate EAX 5.0 functionality within a software driver extension pack drew some controversy earlier this year, when the Xonar DX was first introduced. We covered this story in April, in a separate article comparing the two approaches to environmental DSP in games.

The burning question in the minds of those who’ve lusted after the more expensive ASUS Xonar sound cards is this – exactly how much of the high-end experience is sacrificed with the lower-priced DX card, when compared to the D2 and D2X? In this review, we’ll take a look at this newest product in ASUS’ successful Xonar line, and discover the answer to that question.