Be sure to make a mark on the calendar for February 25, 2010. Why? Because it marks the day that AMD finally rounds out its entire HD 5000-series of cards. There are sure to be follow-ups in the future, such as bumped-clocked parts and maybe special offerings on the side, but as it stands, AMD currently has a card for all budgets, so in theory, its HD 5000 line-up is complete.

As corny as some of my jokes are, the statement is true. AMD currently offers a card for all budgets, with nine different models that span $50 to $650. Such a feat isn’t usually so impressive, but it is in this case since AMD managed to get all of these models out the door before NVIDIA could follow-up with its first model of the same generation of cards.

Though NVIDIA is set to launch its first Fermi-based cards late next month, AMD has truly pulled off quite the accomplishment here. As mentioned in our news section a couple of weeks ago, thanks to various changes within AMD’s graphics division, the company has managed to hit almost all of its deadlines on time, and without much of a problem afterward. There were supply issues late last fall, but those have since been sorted out, so you could really say that the company is happily rolling along right now. 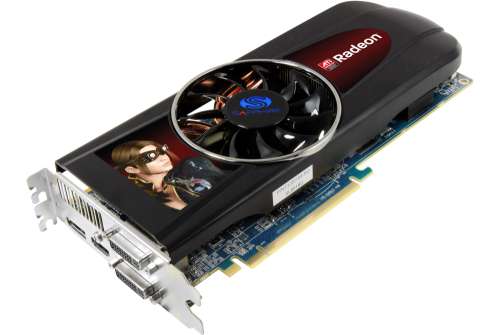 One thing I should mention about the HD 5830 launch, though, is that I’m not quite sure what to expect from stock over the course of the next couple of weeks. There might not be a problem, but there seems to be a lot of mystery surrounding the press samples used for this launch, so I’m a little skeptical on the entire thing. Supposedly, one of the more popular vendors received only two cards to sample, and this is a company that normally has a dozen or more.

Normally, something like that wouldn’t phase me, but the sample we received direct from AMD even has a couple of strange issues. For one, it’s not a reference card, but rather a pre-release card. It’s for that reason that I’m not going to include photos of it here, because it doesn’t at all reflect the cards that will be available for sale (believe it or not, the HD 5830 we have is 2″ longer than the reference HD 5850, but retail cards won’t be).

Above, I mentioned that the suggested retail price for the HD 5830 is $240, and at that price, its best competitor with NVIDIA is the GTX 275, which retails for about the same. The problem there, is that the GTX 275 looks to be on its way out, and the only version I could find in stock was a pre-overclocked model that was selling for well over $300. So given the lack of general availability of the GTX 275, our next best competition is the GTX 260, which currently sells for an average of $215.

This is one of the rarer occasions when a card launch doesn’t have a direct competitor, so we’ll just have to use our heads to figure out how the slightly more expensive HD 5830 compares to NVIDIA’s last-gen GTX 260. To get on with the show, let’s take a quick moment to review AMD’s line-up once again:

For those interested in performance results for the Eyefinity 6 when used with six monitors, you will have to wait a couple of weeks, as the embargo is later than what it is for the HD 5830. Techgage will not be taking a look at that card, as we lack six equal-sized monitors, but we’ll be happy to link to quality sites that do take a good look at what’s sure to be a very drool-worthy setup.

But so as to not deviate too much from the model at hand, let’s get right back to the HD 5830. In the table above, we can see that the card falls nicely in between the two other models mentioned earlier, the HD 5770 and HD 5850. It has a slightly higher core clock than the latter, but finds itself a bit scaled back due to it having less stream processors (1440 > 1120). With this information alone, it’s fairly easy to assume the performance we’re soon going to see.

At the top of the page, I posted a picture of Sapphire’s version of the HD 5830, which doesn’t quite follow reference design, but still contains a shroud that mostly covers the entire card. Above are a few other takes on the same card, from Gigabyte, XFX and HIS. None of these coolers are unique to their respective companies, but all are unique when compared to one another. At first glance, it looks as though Gigabyte’s cooling solution may be the most effective, but it’s hard to tell without actually having each card here to test.

But, I digress. Before we hit up our results, the next page will cover both our test system specs and our methodologies. If you’ve never looked through those before, I recommend it. After that, we’ll dive right into our look at Modern Warfare 2 performance.