On this page, we’re going to be tackling a few additional encoding-type projects. Since the beginning of its life, we’ve benchmarked with Adobe’s Lightroom, but dropped it for about a year or two a few years back because it wouldn’t reliably scale. Over time, things changed, and now the application seems pretty efficient on multi-core CPUs.

In addition to Lightroom, we’ve also tested Blackmagic RAW Speed Test, which acts as a simple way to see how a CPU can handle playback of BRAW footage at different compression levels. Finally, we’re also testing with LameXP, an open-source music encoder that can take advantage of many-core CPUs, as well as the super-popular HandBrake transcoder. 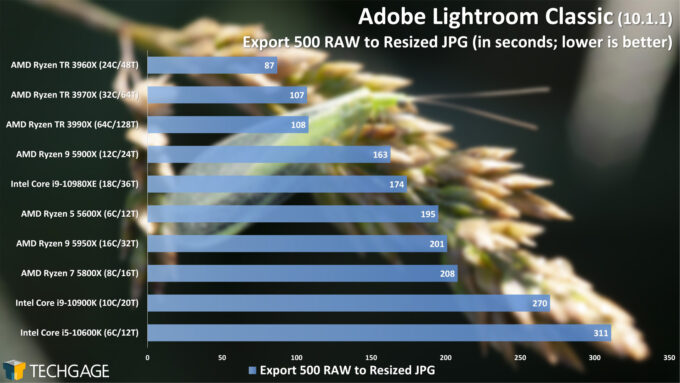 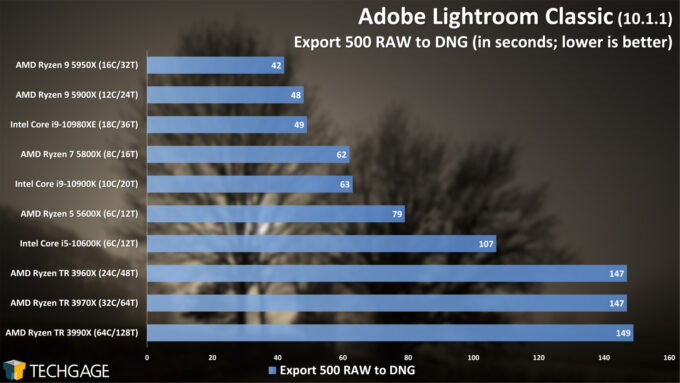 As hard as it is to believe sometimes, we’ve been benchmarking Adobe’s Lightroom for nearly 14 years. For most of that time, we used the same photo set that came out of our Nikon D80. Recognizing the aging set, a friend of the website provided us with a new set of higher-resolution RAW files from a Canon DSLR. To our surprise, scaling hasn’t changed much, but the bigger files make for a more strenuous test.

To date, we’ve only tested Lightroom’s JPG export, which involves a resize and also an application of a matte finish. This time around, we added DNG export, and are glad we did, because as you can see from the results above, the scaling changes up quite a bit.

With the JPG export, the Threadripper chips take the top spots, but fail to do the same with the DNG export. With DNG, it seems as though there is such thing as a perfect blend of cores and clocks, something that helps propel the 16-core 5950X to the top spot. Amusingly, the Threadrippers that dominated the JPG export fall to the absolute bottom in the DNG export. If you need a many-core chip that performs great in Lightroom, you either want the Ryzen 9 5950X or Core i9-10980XE. 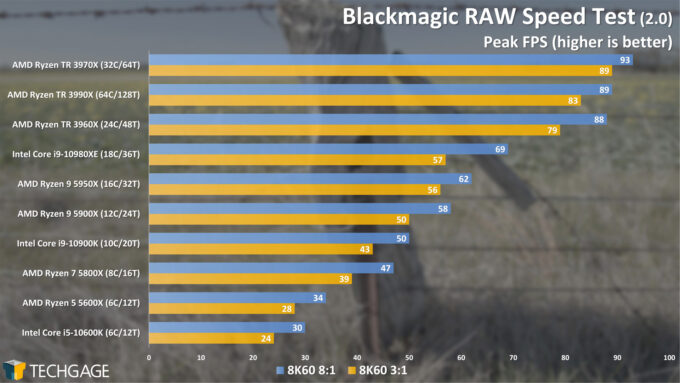 BRAW is a format that can take great advantage of CPUs and GPUs alike, something proven in the results here. Once again, the 64-core 3990X doesn’t dominate as much as it should, with the 32-core 3970X placing in front of it. Aside from those top results, the rest scales pretty much as expected all the way down. On a budget, a CPU like the 8-core 5800X or 10-core 10900K looks to offer a decent value overall, but you will definitely see improvements if you opt for a bigger model. 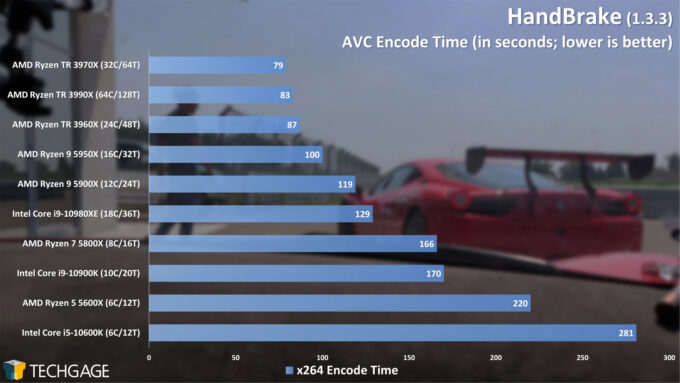 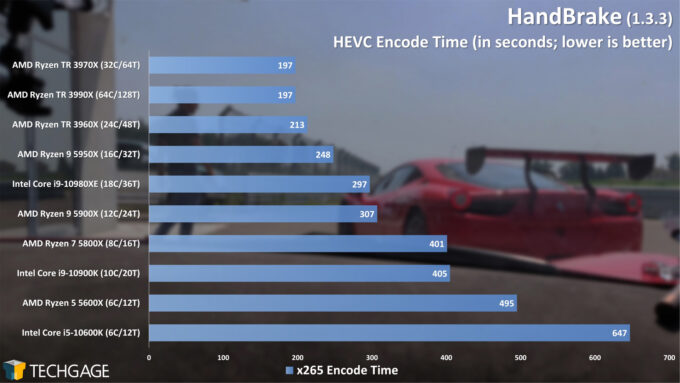 With our HandBrake transcode tests, the 32-core 3970X yet again hits the top spot. It should be clear by now that while the 64-core 3990X is all sorts of impressive in its own way, most encoding software will scale better on the smaller models. We’re really eager to see how the next-gen Threadripper, based around the Zen 3 architecture, changes things up. 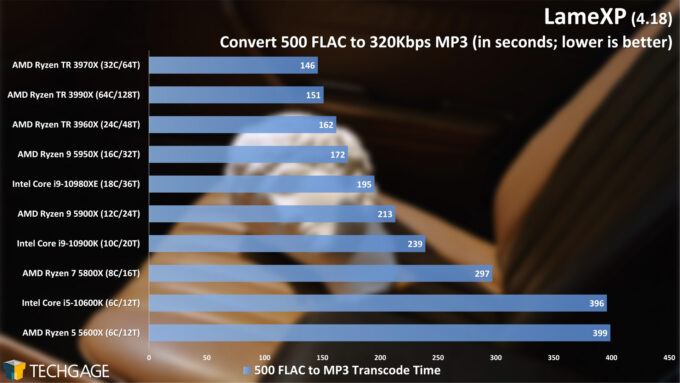 As someone who’s encoded tens of thousands of music tracks over the years, a test like this LameXP one hits close to home (even if I don’t encode too much anymore thanks to streaming services). LameXP won’t use every single thread the top-end Threadrippers give it, but they still manage to scale better than the mainstream counterparts.

The 5950X continues to look strong here, but everything aside from Threadripper essentially scales as we’d expect. In time, it’d be great to see how this test would scale if all cores/threads were utilized. With enough threads, a test like this could make for a good storage test, as well.