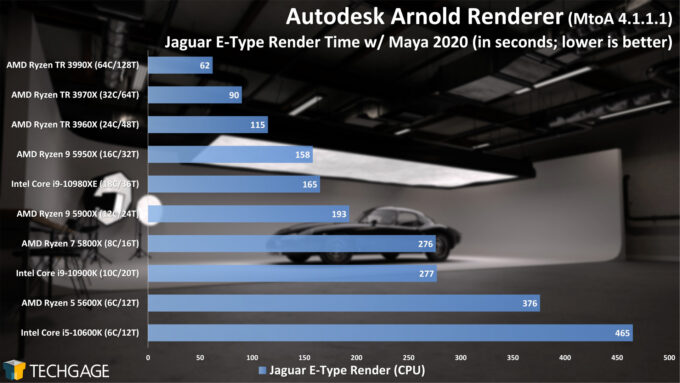 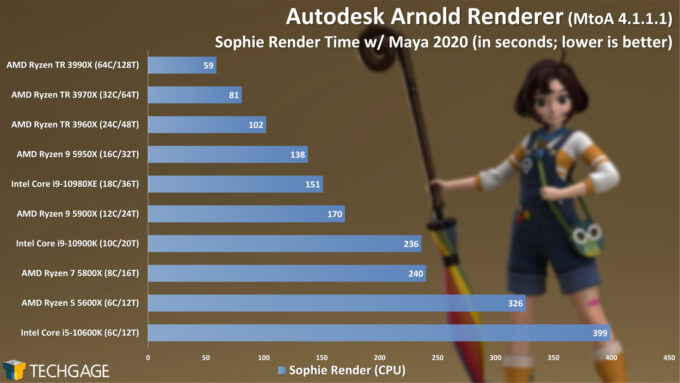 We saw AMD’s top-end Ryzen Threadripper 3990X perform sporadically across much of our encode tests on the previous pages, but rendering is one scenario that a many-core chip can prove that it’s better than the rest. That 3990X effortlessly takes the top spot, with the rest of the models scaling downward as we’d largely expect. We’re not quite sure why the six-core Intel i5-10600K performed so much worse than the Ryzen 5 5600X here, but we’ll see if that continues in the next tests.

For the most part, the more you spend on your CPU, the faster your renders are going to be. Naturally, we’d be remiss to ignore the fact that we’d encourage most people to consider GPUs for rendering nowadays, especially if you’ll be able to combine both of the processors together for the same render. Arnold currently does not offer heterogeneous rendering, but we’d expect that to change in time. 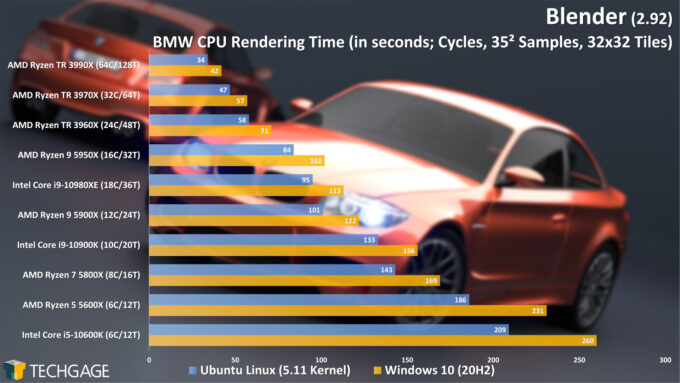 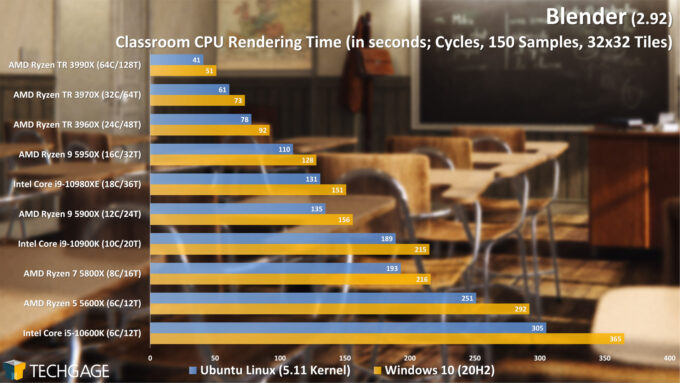 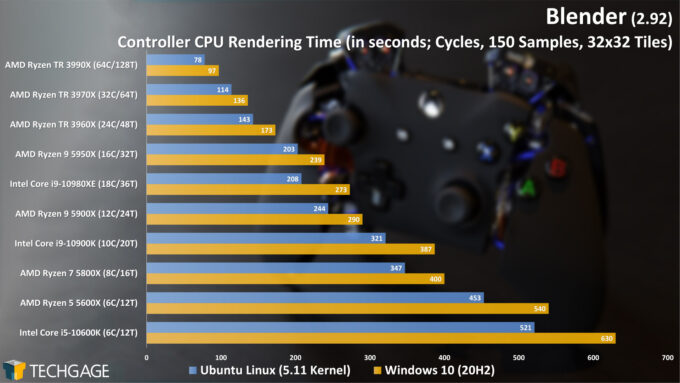 For a full-blown look at Blender performance, we’d encourage you to look through our dedicated 2.92 performance deep-dive. That article includes not just rendering, but also viewport tests – and yes, sometimes the CPU can impact performance there (but mostly with Solid and Wireframe modes).

As part of that in-depth 2.92 testing, we also tested using a current version of Ubuntu, updated to the latest kernel. As you can see, there are definitely performance improvements to be had, and noticeable ones, at that. Whether it’s enough to make most serious Blender users leap from Windows to Linux, we’re not entirely sure, but a performance boost awaits those who do.

That said, as mentioned before, the GPU is becoming ever-more important for rendering, so if you end up opting for that focus, you can skimp on the CPU a bit, as long as it’s competent for the rest of your tasks. Speaking of GPU, let’s toss that into the mix: 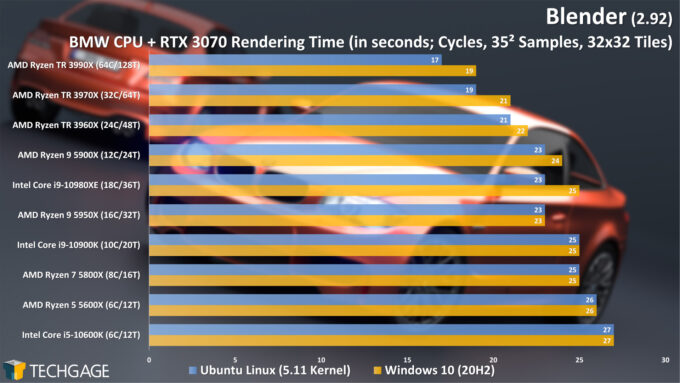 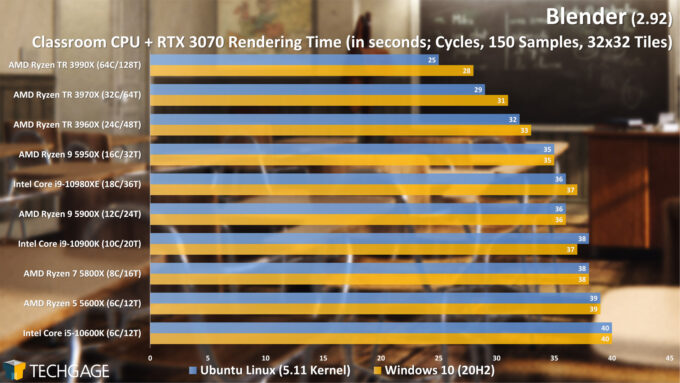 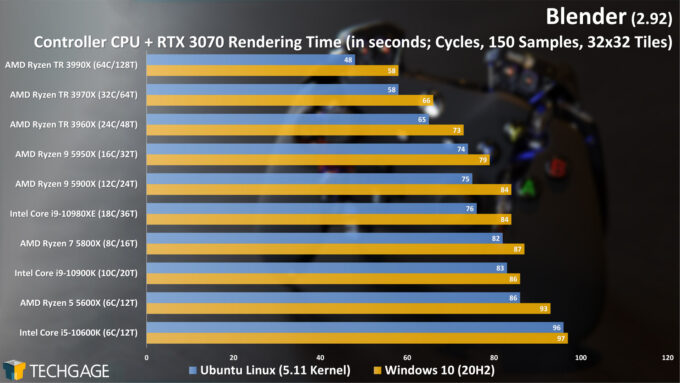 These results help prove that the GPU is really important for fast render speeds in Blender. Take a look at the Core i5-10600K six-core, for example. In the BMW test, the CPU alone rendered the scene in 209 seconds (in Linux), a value dropped to 27 seconds with the RTX 3070 added in. If you pair a many-core CPU with your GPU, you will see even larger gains – the 64-core dropped from 34 to 17 seconds in the same BMW test.

Note that it’s only the Cycles render engine in Blender that can take advantage of the CPU. If you’re using Eevee, you’ll be strictly looking at GPUs, as the CPU is used for things other than rendering (but you still don’t want to go too low-end; higher clocks do help.) 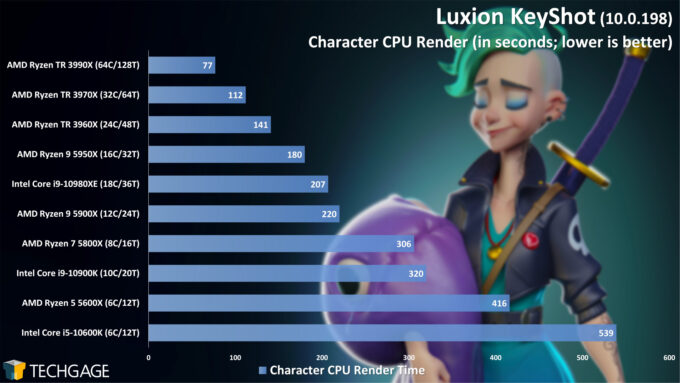 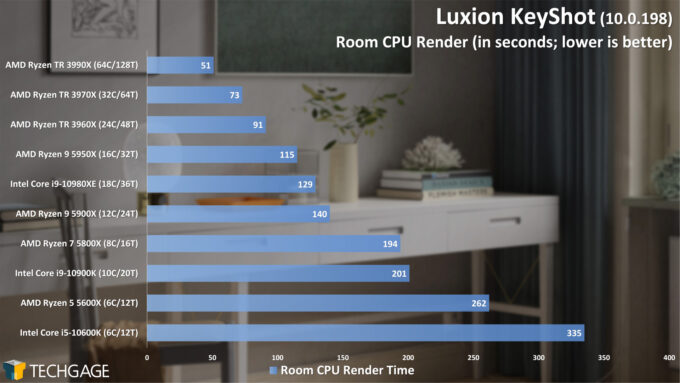 We believe that this is the first time we’ve taken a look at CPU rendering with KeyShot since version 10 came out, and as always, it scales really well on big CPUs. Like Arnold, there is no heterogeneous option in KeyShot to take advantage of both the CPU and GPU at the same time for rendering, so you can’t expect speed-ups there. However, the software does have rich multi-client support, so you could have two instances open, using the CPU for one, and GPU for the other. You can even use two instances of KeyShot for the same project at the same time, using a dedicated processor for each. 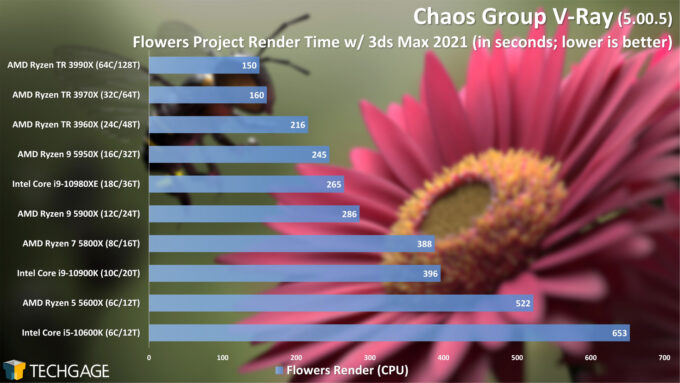 Every single renderer tested in this article is either CPU-specific, or was CPU-specific at one time. As soon as GPUs became better at accelerated ray tracing, they quickly became adopted for the purpose. V-Ray was CPU-only for most of its life, but CUDA support was added in a few years ago, followed by OptiX (required for RT core use) more recently.

Interestingly, the scaling at the top-end here isn’t quite as pronounced as it is in some of the other renderers, but nothing changes about the fact that the bigger the CPU, the faster your renders will be. AMD’s 16-core 5950X even managed to step ahead of the 18-core 10980XE in this test.

As before, let’s add our RTX 3070 to the rendering process and see what changes: 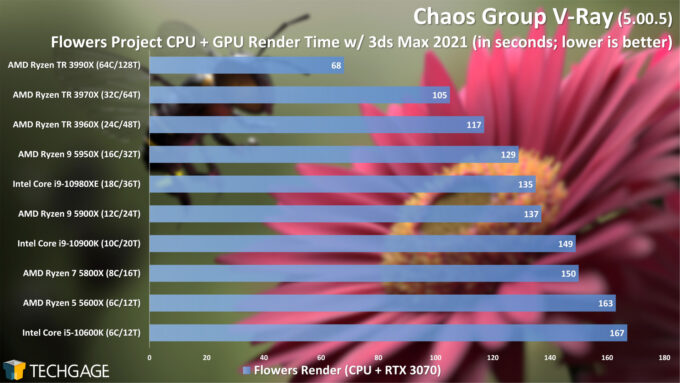 There are some results here we didn’t quite expect. The 64-core 3990X didn’t exactly blow the 32-core 3970X out of the water in the previous CPU-only test, yet it pulls far ahead in the heterogeneous test. This becomes the best example of CPU+GPU for AMD’s biggest offering.

Fortunately for everyone else not looking for a $3,990 CPU, the GPU can add so much performance to the rendering process, that the importance of the CPU is reduced a bit. As always, you still don’t want to go too low-end, because the faster your clocks, the better the responsiveness. But, if you have needs for a lot of memory, and perhaps a quad-channel memory controller, you’ll pretty much be tied to either the AMD Ryzen Threadripper or Intel Core X platforms. 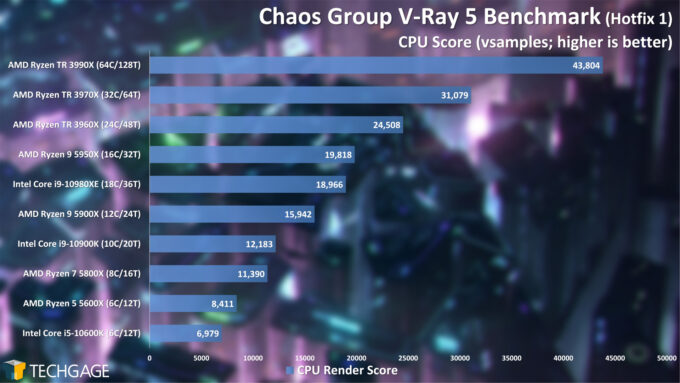 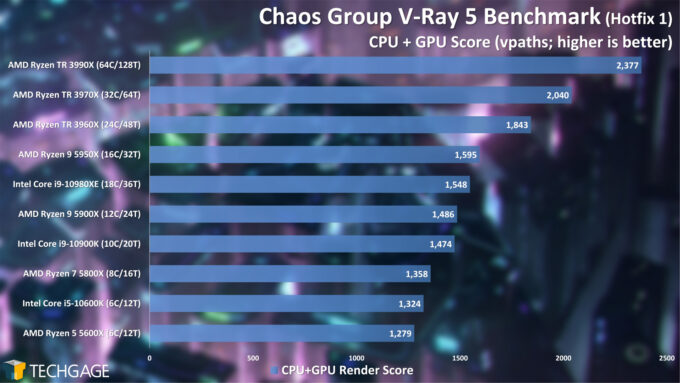 We’re sometimes asked why we like to test with real renderers inside of real design suites, and the above charts can help explain it. In our Flowers test, using only the CPU didn’t really help the 3990X strut its stuff too well, but in this synthetic test, it pulls ahead quite a bit more. Likewise, it didn’t gain quite as much of an advantage in the CPU + GPU test, but it’s still clearly dominant.

For a high-end best bang-for-the-buck, the Ryzen 9 5950X and Core i9-10980XE deliver both great clocks and core counts for the purpose, but it’s not the end of the world if you need to adopt a more modest CPU. With a GPU added, every CPU suddenly seems so much better.