by Rob Williams on July 7, 2021 in Graphics & Displays, Processors

With the release of Blender 2.93, the 2.X era comes to an end. Considering Blender 2.0 released in August 2000, you could say that this moment is a bit special. It’d be a true understatement to say that the software has come a long way in all of that time, so let’s honor the final major 2.X release with some in-depth rendering and viewport benchmarking, shall we?

When it comes to an efficient workflow, fast rendering performance matters a lot, but it’s not the only performance measure that’s important in design work. If the viewport that you spend most of your time working in is slow, then it’s going to make your work more laborious, and tedious. As we’ll see, your choice of GPU can have a really big impact.

While a viewport is a graphical interface, its performance can be impacted by the speed of your CPU. A CPU with a faster clock speed is likely to deliver better overall performance than a slower one, but the end differences shouldn’t ever become a deal-breaker. Notably, it will be the Solid and Wireframe modes that can benefit from faster CPUs more, but your chosen resolution will dictate how much that matters.

If you look back to our rendering article from a few weeks ago, where Blender testing was performed on an AMD Ryzen Threadripper 3970X 32-core processor, you will see obvious differences in those particular modes. So, in our mind, your ideal workstation should have a really fast CPU (such as the Ryzen 9 5950X we’re using in ours), coupled with a good GPU. Then you will have your bases covered.

Let’s start with a look at the most grueling viewport mode (aside from live render), Material Preview: 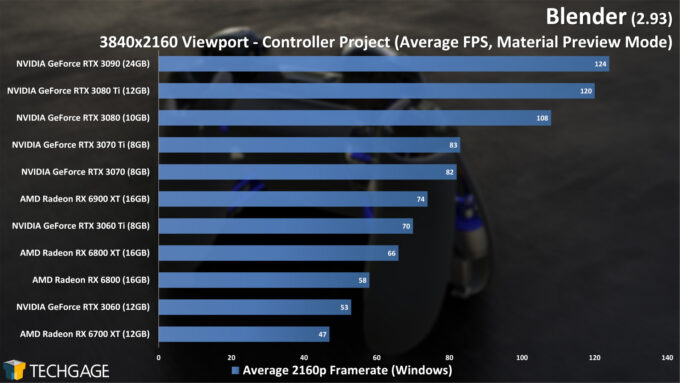 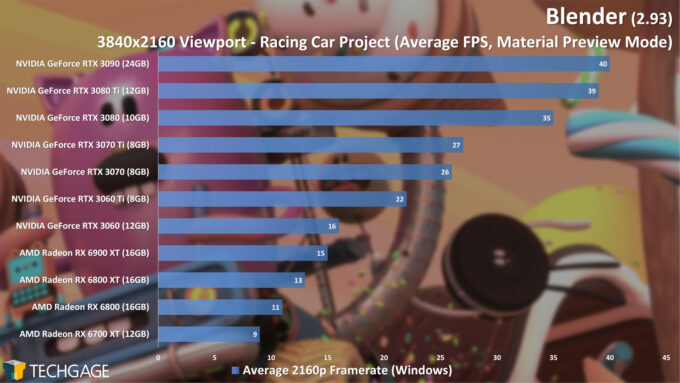 Just as with games, the more complex a scene, the slower it’s going to render in your viewport. With the Controller project, the controller is effectively the focal point of the scene, and as such, using Material Preview mode will deliver great performance on any of the included GPUs – although we’d be remiss to mention that there’s a pretty big performance delta between the bottom and the top. If you use a high-refresh monitor, the bigger GPUs will take better advantage of it.

In the Racing Car project, the scene is much more complex, and it really shows through the performance results. While the RTX 3090 secured 120+ FPS with the Controller project, this Racing Car project failed to exceed 40. It’s projects like this one that really highlight the need for big GPUs if you want definitively good Material Preview performance.

With the Solid and Wireframe modes, they may appear to be so simple that interesting scaling wouldn’t be seen, but that’s not the case at all: 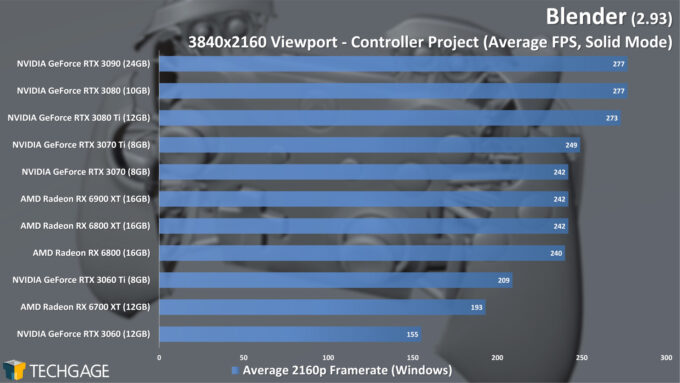 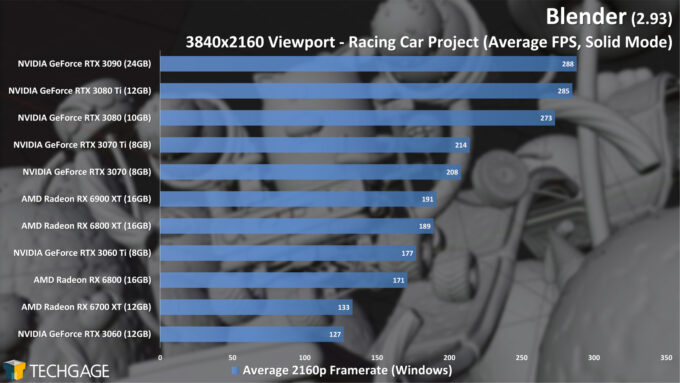 With the simpler Controller project, GPUs don’t have much room to show off, but once again, the more complex Racing Car scene gives us really good scaling. The RTX 3080 and higher really set themselves apart from the rest. With the super-fast CPU we have in this test rig (5950X), we’re exceeding 240 FPS on a number of GPUs.

Wireframe is a bit of a different beast: 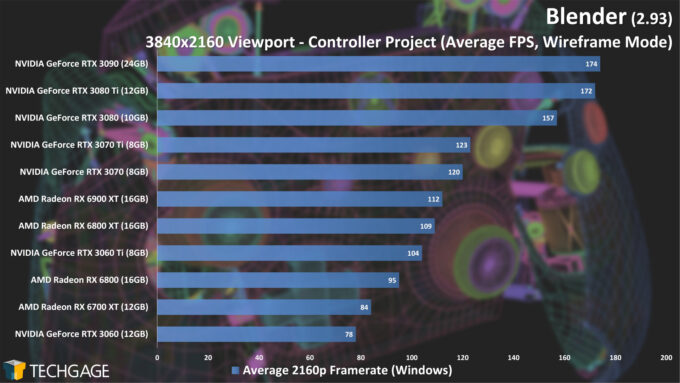 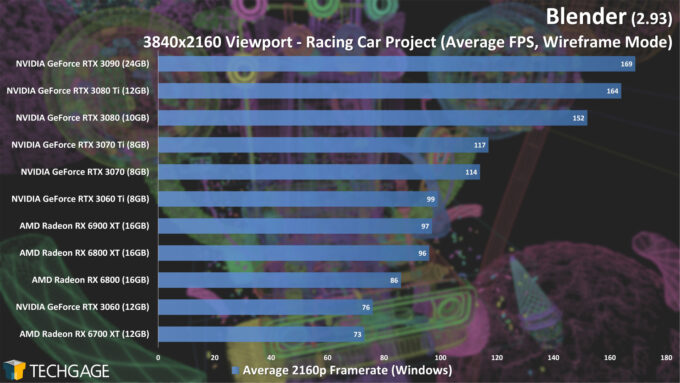 Moving from Solid to Wireframe chops off a rather large percentage of the overall FPS performance, but ultimately, unless you have a high refresh monitor, you’re not going to notice any lacking performance. Throughout all of these tests, we’ve seen that AMD doesn’t just struggle to catch NVIDIA across our rendering tests, but suffer the same here. Likewise, the RTX 3060 has shown itself to not be the best fit for all use cases, despite its large 12GB frame buffer.

As with our games, the lower the resolution, the more reliant a CPU’s single-threaded performance becomes. Here’s a look at the Material Preview mode for both projects at 1440p and 1080p: 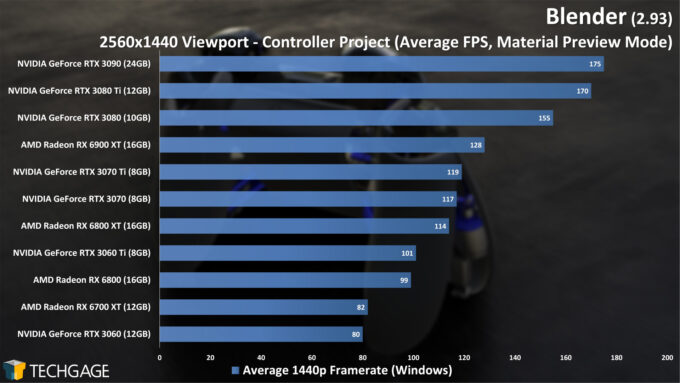 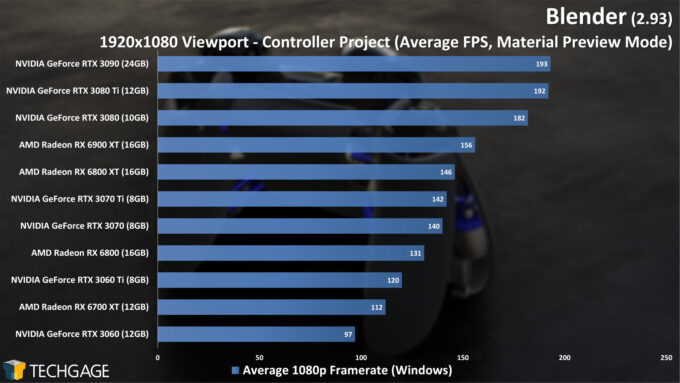 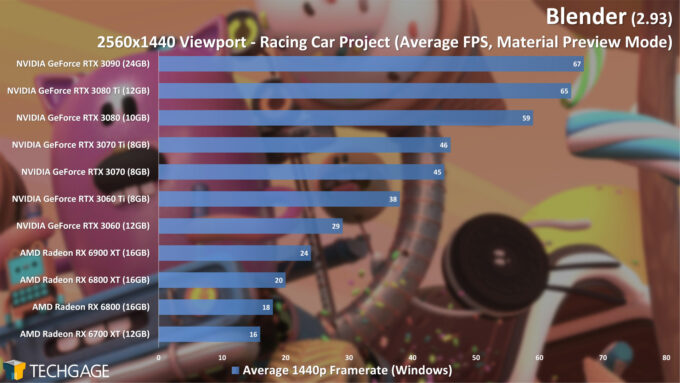 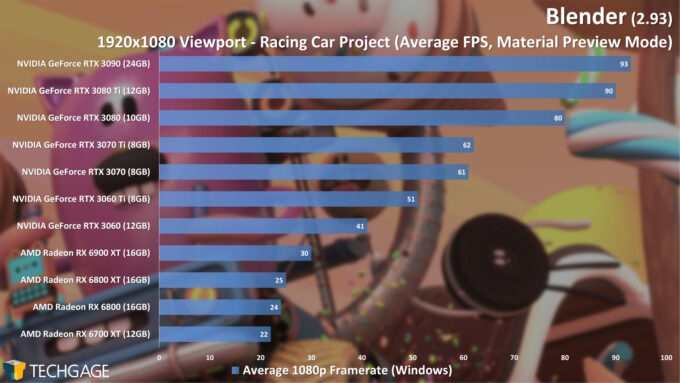 Based on what we see from all of these viewport tests, the RTX 3060 Ti really stands out as being a great target to start from, as it offers a fair bit more performance than anything else under it, including AMD’s competition. Considering the viewport won’t take advantage of NVIDIA’s OptiX API, the fact that NVIDIA pulls so far ahead of AMD in these tests is pretty notable, and rather unfortunate for Radeon fans.

As we wrap things up here, the truth of the matter is that not too much has changed since the 2.92 version (outside of EEVEE), which is one of the reasons we felt compelled to get the official Still Life project in and benchmarked. We’re glad we did, because that project delivered different scaling on the OptiX front, although it changes nothing about the importance of including accelerated ray tracing in your workflow if you can. Sadly, AMD’s GPUs don’t yet take advantage of accelerated ray tracing, but future Blender versions will involve Vulkan more, so we’re hopeful the company will experience a bit of a resurgence in time. 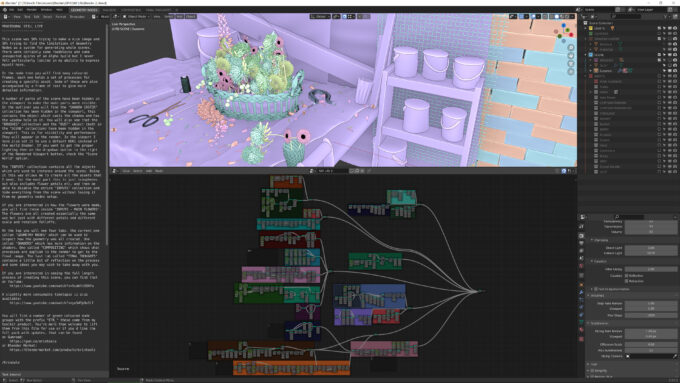 On the topic of AMD, the de facto annoyance we’ve had when testing Blender the past year is seeing Radeon cards fall notably behind NVIDIA, even when ray tracing acceleration isn’t involved. The viewport results above can even highlight greater deltas between the two vendors than some of the renders do. Then there’s the issue of driver stability.

It was last fall, with our look at Blender 2.90, that some notable issues became more common in Blender with Radeon GPUs, and we’re not really sure that much has improved since then. In advance of any performance testing for a new article, we always ensure we have up-to-date drivers, but for Radeon, we couldn’t go that route this time. The recent 21.6.1 driver gives us errors in select renders, while the 21.6.2 driver has converted that error into a blue-screen-of-death.

There’s not really much more we can say here. We thoroughly test Blender, having done deep-dives for 2.80, 2.81, 2.83, 2.90, 2.91, 2.92, and of course, 2.93, and from our experience, you’ll have an easier and better time with NVIDIA if Blender is your primary tool of choice. That assumes you are using Cycles or EEVEE, and not AMD’s own Radeon ProRender, which may prove more stable. ProRender performance can be found in our previous article. Again, this is all unfortunate, because we want to see AMD perform a lot better in Blender on the GPU side, especially since the company so heavily promotes its use.

Depending on what you’re after, this article should take care of helping you figure out which CPU or GPU you’ll want to target for your new build. If you have any questions for something not covered, please hit up the comments below.

It’s hard to believe, but the next time we take an in-depth look at Blender, it’s going to represent a completely new base version number – after close to 21 years of revolving around 2.X. The launch of 3.0 is going to be really special, and for the sake of better performance all around, we hope it brings forth some improvements for the red team.