Firaxis impressed us last summer when it released the excellent Gods & Kings expansion pack for Civilization V, so leading up to the launch of Brave New World, the game’s second expansion, expectations were sky-high. Did the company deliver yet again? Let’s find out, and get cultured in the process.

When Firaxis pushed Sid Meier’s Civilization V out the door in 2010 (our review), fan reactions were quite varied. As someone who used the game as a gateway into the series, I found it to be truly amazing, and couldn’t quite appreciate the arguments from long-time fans about where the game went wrong. A common complaint was that it was “dumbed-down”, catering more to new players than the series’ biggest fans. It wasn’t until Gods & Kings‘ (our review) release in 2012 that I began to better understand the root of those complaints.

Simply put, G&K was an absolute “must have” expansion pack. For the most part, it brought back most of what fans believed should have shipped with the original game, such as religion and espionage, and while it remained accessible for new players, it added more complexity for old-schoolers, resulting in a richer experience overall. A couple of matches with G&K is all it took to make sure you never disabled it.

The same thing can be said about the game’s second expansion, Brave New World. Be prepared to cough up $30, or I’d recommend you to stop reading! 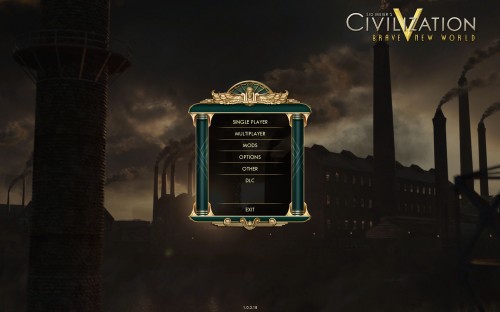 The biggest change of them all is one that I consider to be long overdue: an overhauling of the cultural victory. Pre-BNW, cultural victories were arguably pretty boring. The game basically forced you to a rigid path, and as long as you were left alone most of the match by other civs, you were likely to secure a win if you didn’t mess up some detail. The problem: to go for second culture win, you’d be playing the game in the exact same way. While still challenging, the biggest strategy was making sure you were the first to secure certain world wonders and were quick to adopt the correct social policies.

Achieving a culture win in Brave New World requires you to become more effective at spreading your culture through the world than your competition. Like before, one of your goals will be to generate as much culture as possible through a combination of worked tiles, wonders, buildings and social policies.

Another goal comes in the form of a new mechanic: tourism. Like culture, tourism has a value, and the higher that value is, the more effective your spread of culture becomes. You can increase tourism by adopting certain social policies, tenets (we’ll get into that soon), choosing a ruler that supports it and building airports and hotels. Seems simple, right? Not so fast – we’re just getting started.

Building something like a museum, opera or some world wonder to generate extra culture (or tourism) is just half of the equation here. Each one of these buildings will include one or two slots that can be filled with Great Works that are produced through Great People; these include Great Writers, Great Artists and Great Musicians. Whenever one of these Great People are born, you can choose an option that automatically fills in an available slot in the nearest city that has one. 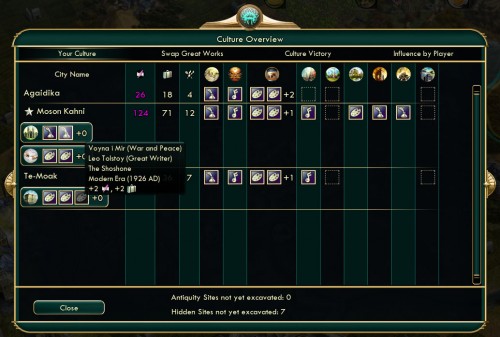 Paying attention to the Culture Overview screen is imperative when you’re hoping for a culture win, as it allows you to easily see which buildings have been built in each city and also which slots have been filled with a Great Work. In this particular example, I had a couple of wonders that had no slots filled at all, but my museums and operas were complete.

“Complete” is a relative term, though, because for an even greater chance of a culture win, you must pay attention to the potential bonuses that some of these buildings or wonders offer, if works are arranged accordingly. For example, one wonder might want you to place a work of art from two different eras but by the same civilization; another might ask you to place two works from the same era but two different civilizations. In the shot above, the +2 and +1s under the museum are applied bonuses.

This brings us to another Brave New World addition: archaeology. Once Archaeology is learned during the Industrial Era, Archaeological Digs will be revealed around the map; in a small map, there were about 30 of these in total. 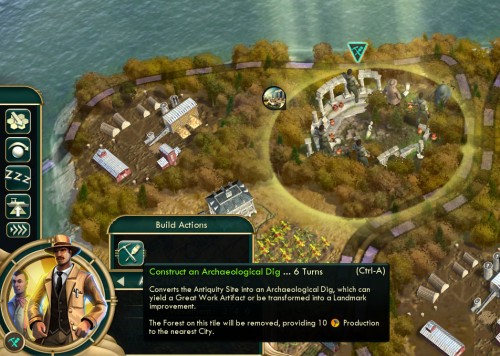 If one of your cities has a University, you’ll be able to create an Archaeologist that can go work at any Archaeological Dig to either create a landmark improvement, or extract an artifact. If you go the artifact route, you’ll be able to choose between two, and because of how the bonuses mentioned above work, you’ll likely want to refer to the Cultural Overview screen before settling on one. 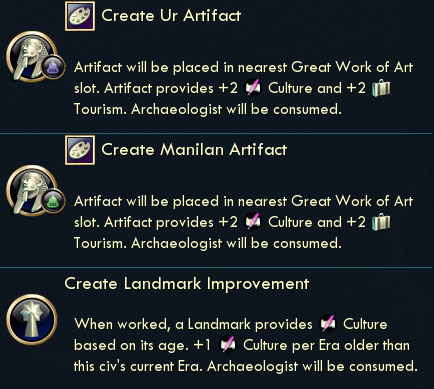 To ultimately score a culture victory, you must become “Influential” with every civilization still in the game. With the Culture Overview screen, you can easily see where you stand with each one (the order is Exotic, Familiar, Popular, Influential and Dominant). If you’re at war with someone, expect it to become very difficult to keep tourism up. 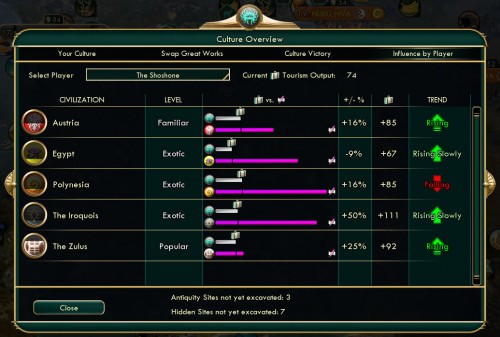 While you must pay close attention to all of these factors to secure a culture win, those who are striving for another win can still earn social policies a lot quicker if they work at it also – so really, these mechanics shouldn’t be ignored by anyone.

Another victory type that’s been affected in Brave New World is diplomatic. No longer will a player be able to build a United Nations and trigger a voting; instead, a World Congress will automatically build one if someone reaches the Information Era or at least half reach the Atomic Era. As before, the better you’re getting along with other civs and city-states (more so city-states), the better your chance of winning a diplomatic victory. 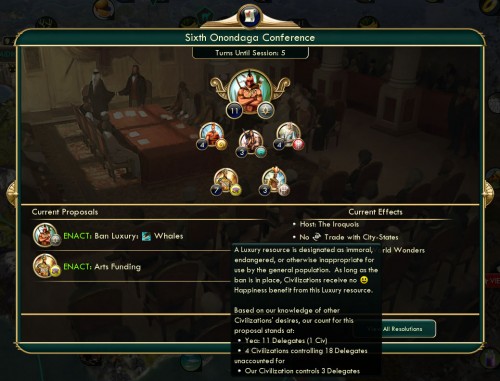 There’s a lot more to the World Congress than simple occasional voting, however. Based on your overall favor, you’ll get a certain number of votes each session, with the proposals being anything from a banning of exports to the agreed building of a project. If a luxury you rely on for happiness is proposed to be banned, you better hope that it isn’t. Vice versa though, if one is banned that doesn’t affect you, feel free to smirk towards the opposing civ that it does. To help sway a vote in your favor, your spies can become diplomats in opponent cities. 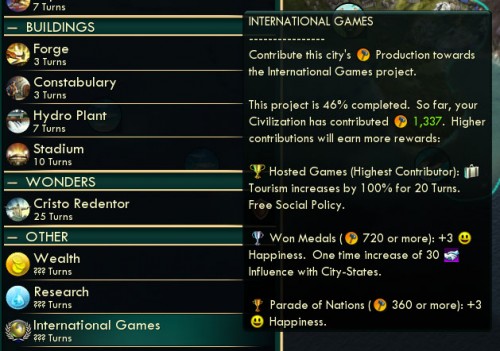 Sometimes, the World Congress can kick-off a project that’s well worth contributing to because the rewards could greatly help you. The International Games, for example, could grant you at minimum +3 happiness, and moving on up, you could gain bonuses to city-state relationships and Tourism. If you happen to be the leading production donor by the time the project is built, you’ll earn every reward offered. Yes, that’s “1337” production I donated, and yes, that was luck.