Through its Storm product line, Cooler Master has introduced an entire family of gaming-oriented peripherals. Time to add one more member to the mechanical keyboard lineup: the QuickFire TK. Featuring a unique layout and a compact footprint, how well does the TK measure up to its heralded sisters? Read on to find out.

Would you believe that it has only been scarcely a year since Cooler Master’s Storm gaming product line first waded into the shark tank that is the mechanical keyboard market? The QuickFire Rapid was the first to jump in, followed in subsequent months by its sisters the QuickFire Pro and the Trigger. By all accounts, including ours here at Techgage, all three are certifiable hits.

Today, Techgage has the newest member of the CM Storm mechanical keyboard family on-hand: the QuickFire TK. We’ll have a good look at it and see how well it stacks up to the pedigree established by its older siblings.

Cooler Master sent us its newest baby in nothing but a plain white box, so I suspect what we have is a sample strictly for review. I mention this at the outset since there is a possibility that the shipping retail versions may have some subtle differences from what we received. It’s currently shipping, but the roll-out to certain e-tailers is slow. It carries an SRP of $99.99 USD. 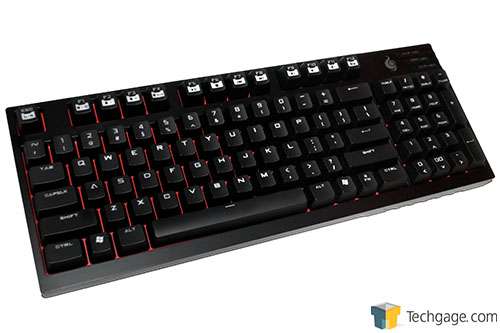 From the first time you lay your eyes on it, it’s clear that the QuickFire TK shares plenty of DNA with its elder sisters. For example, it has a detachable braided USB cable that plugs in underneath the keyboard chassis, just like the Rapid and the Pro. Also like these two variants, the TK has three channels through which you can route the USB cable (left, right, center) for best convenience, according to where your keyboard is relative to the PC. 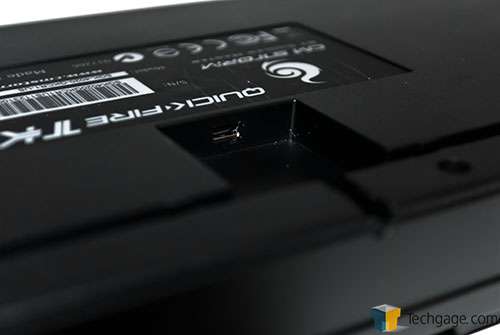 In terms of physical dimensions, the TK is a just a smidge larger than the Rapid in all three dimensions (L, W, and H). Styling-wise, it borrows the most from the Pro: the TK features iterations of the Pro’s most distinctive styling cues, most obvious in the “Lock” indicator LED cluster, as well as its dark anthracite coloration. The TK also has CM Storm’s very attractive custom font on its laser-etched keycaps as well, a detail it shares with all of its sisters. 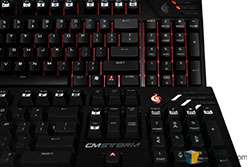 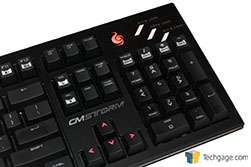 And in case you thought it borrows nothing from the Trigger, the TK has the Trigger’s capability for full backlighting of the entire keyboard. Indeed, not only can you have backlighting for all the keys, you can choose to have it just for the WASD and arrow key (more on this later) clusters, or “go dark” entirely. The TK borrows something else from the Trigger, too: Multimedia shortcut keys! These keys are not distinct, but are secondary functions of keys F5-F11. They are accessible by activating the Fn (Function) key first. (This particular feature is also shared with the rest of the CM Storm keyboard family.) 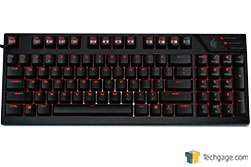 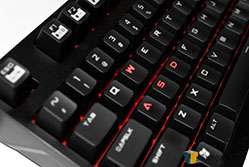 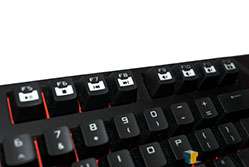 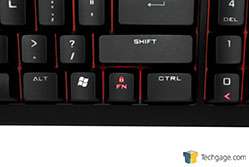 Speaking of the keys, Cooler Master has changed its tactics somewhat with the launch of the TK. When the other CM Storm keyboards made their debuts into the marketplace, the company did not offer consumers in a given region a choice of available Cherry MX mechanical key switches. For example, in North America, only the Cherry MX Blue key switch was available for the QuickFire Rapid; likewise, the QuickFire Pro and the Trigger both just came with the Brown switch type. Other key switch types for these models, though, were available in other regions, although it must be said that for each model, only one key switch type was available for each region.

Very recently, though, perhaps after some consumer feedback, Cooler Master has relaxed its “one key switch per model per region” availability policy and now offers consumers more choice in key switch type. A quick look at Newegg’s inventory shows the QuickFire Rapid is now available with the Blue, Black, and Red switches; the QuickFire Pro, with the Brown and Red; and the Trigger, with all four Cherry MX switch types. In my opinion, this is how things should have been done from the onset. 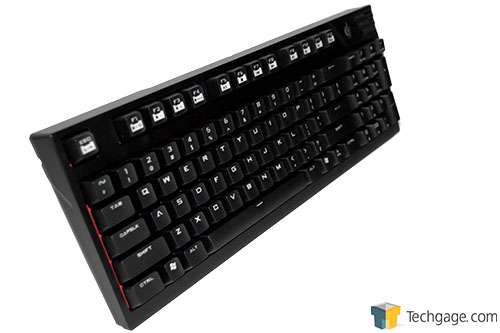 As much as the TK shares with its older siblings, though, one thing makes it different from most other keyboards: its unique form factor. As stated before, it’s just fractions of an inch larger in every dimension than the very compact QuickFire Rapid, but it has a complete numpad (tenkey) on it. Cooler Master accomplished this feat by physically eliminating the four arrow keys and the six so-called command keys (Insert, Delete, Home, End, Page Up, and Page Down) from the TK. This contrasts with a tenkeyless design which retain the arrows and command keys but forego a numpad. On the TK, those command keys haven’t disappeared completely. If you really need your arrow keys and/or any of the command keys, simply toggle the Fn key on, then hit the specific keys on the number pad which correspond to whichever function you need. 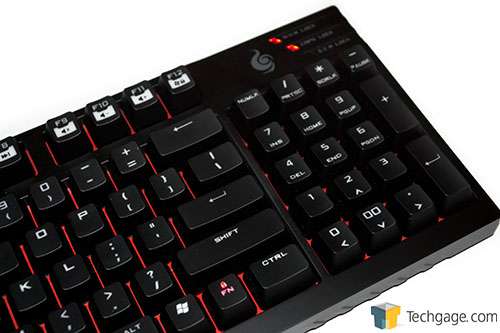 Now that we’ve had a good look at the QuickFire TK, let’s see how it is in action.