Testing the QuickFire XT is a straightforward process since it is such a straightforward mechanical keyboard. It runs on plain ol’ Windows USB drivers; it doesn’t depend on an often clunky software package to get the best out of it.

First, the obligatory comments on its build quality. Subjecting the QF XT to my de rigueur chassis flex test reveals it exhibits just the most minimal degree of visible flexion. It’s certainly no more than other top-notch mechanical keyboards that I’ve sampled, including most of the CM Storm mechs. Indeed, the QF XT’s degree of chassis flex is smaller than what I saw in the MSI CK Series I reviewed a couple of weeks ago. Only the sawed-off QuickFire Pro (Green Switch) and the QuickFire TK I reviewed in November 2012 showed less chassis flex (probably because they are such short keyboards). To me, the stiffer and more resistant a chassis is to flex, the stronger the impression of durability and quality is. It’s not a scientific criterion, but as a purely subjective metric it makes sense.

The key caps and the cable also exude the same kind of quality. The cable sleeving, in particular, is top-notch, with its fine threads, tight fit around the cable inside, and absolutely no fraying whatsoever. I don’t think I’ve ever seen sleeving this good anywhere else, to be honest. The beautiful form is allied to its superb functionality, too: The cable is very flexible even with the tight sleeve enveloping it. The key caps, for their part, feel like they would stand up to everything except a hippopotamus stepping on them. They definitely don’t appear as if you could crush them with your fingers. 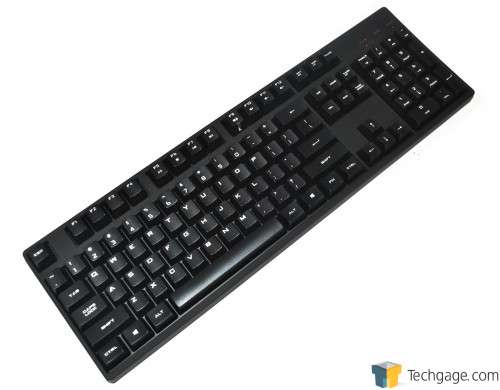 In terms of aesthetics, I love how it’s the most basic looking CM Storm mechanical keyboard yet. It doesn’t have any loud logos on the angles you see, and I love that. It retains the signature CM Storm font on its laser-marked key caps, and it has red LEDs for the Num Lock, Caps Lock, Scroll Lock, and Win Key Lock indicators. This is one keyboard you won’t get any embarrassing comments about in terms of its looks.

Ergonomically, it’s close enough to perfect. My only minor gripe is that the key caps seem to be just a little bit too smooth to the touch. Slippery key caps turn me off, and the QuickFire XT’s are dangerously close to being too slick. I personally prefer to have key caps that have some sort of texture, or maybe even a hydrophobic coating. The extra texture just helps me feel more “connected” to the keyboard, and the QF XT is missing this. But in terms of layout and end user comfort, the QF XT is the keyboard that feels closest to my daily driver that I’ve ever tested.

Good ergonomics go a long way towards enhancing a typist’s performance. Having your favorite type of Cherry MX switch type (Blue, in my case) also helps. It’s no surprise, then, that I averaged 89WPM/0 errors on the QuickFire XT. That’s very close to my best performance on my daily driver keyboard, the Filco Ninja Majestouch-2 with Cherry MX Blues (92WPM/0 errors). Intimate familiarity with my personal equipment probably accounts for the slightly better performance, but it’s a negligible gap.

Interestingly, though, the Cherry MX Blues on the QuickFire XT feel subtly different compared to the ones on my daily driver. The Blues on the QF XT feel just a little bit softer, requiring less actuation force. This isn’t a bad thing; it’s a very subtle difference, but I picked up on it immediately and feel it’s noteworthy enough to mention. It’s certainly very interesting, at least to me. I can’t provide a reason why there is that difference in feel, but given my familiarity with this key switch type (this is the third mechanical keyboard I have which has Blues) it’s noticeable.

A comment about its size and styling: It’s a full-sized keyboard, but its minimalist design ethic means its slightly smaller than the QuickFire Pro. The QF Pro isn’t over-styled like the Trigger is, which is easily the biggest CM Storm mechanical keyboard available; the QF XT is smaller still. I guess, in this way, it’s like the Trigger is the Ferrari Testarossa (ridiculously over-styled), the QF Pro is the Ferrari 288 GTO (not as over-the-top as the Testarossa, but still overtly designed to catch the eye), and the QF XT is the Ferrari 365 GTB/4 Daytona (simple, purposeful). 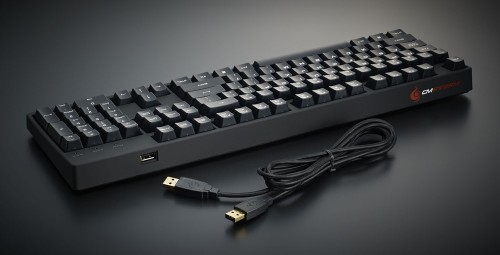 In gaming situations, the QF XT is no better than any other mechanical keyboard that I’ve used. It’s certainly no worse, either. As far as I’m concerned, with the games I play with a keyboard (FPSes, mostly, with a liberal sprinkling of most other genres bar MMOs thrown in), I find Cherry MX Blues to be just as good a key switch type as any. Some more hardcore gamers would probably prefer Blacks or Reds for their purposes, but in my testing any Cherry MX switch type is good enough, regardless of which one it is.

As far as the special function keys go, these worked superbly in most media playback programs. I tested them for functionality in Winamp, foobar2000, Windows Media Player, VLC, iTunes, and CyberLink PowerDVD 12 Ultra. The volume controls worked universally; however, playback controls did not work in Winamp or CyberLink PowerDVD 12 Ultra. I’m unsure why functionality of the playback shortcuts isn’t universal, but I think it has more to do with both of these players than it does with Cooler Master’s end of things. After all, I observed something similar with my last keyboard review, a product from a different manufacturer altogether.

So, what’s the final verdict on the CM Storm QuickFire XT?

With its MSRP at $89.99, it’s a well-priced product, in my opinion. You get high-end quality of construction, mostly clean aesthetics (important for me, at least), superb details such as a great cable (I still don’t get why it needs to be detachable, though), spot-on ergonomics, and superior performance in typing (the most important criterion in any keyboard for this reviewer). Most importantly, though, you get that essential 10-key number pad. For me, this is the only thing that stopped me from buying the original QuickFire Rapid when it was first introduced a couple of years ago. Extras such as multi-media shortcuts and a detachable cable are just that, extras; to me they aren’t strictly necessary. I will admit, though, that I quite like the red WASD replacement keycaps as they provide a neat, color-coordinated visual counterpoint. I still haven’t put the stock key caps back on. Indeed, the only complaint I’ll bother to register is the lack of suitable texture to the key caps. Despite this, in sum this is my favorite CM Storm mechanical keyboard yet.

Thus far, all of CM Storm’s mechanical keyboards we’ve reviewed here at Techgage have earned our Editor’s Choice award, and the QuickFire XT easily deserves one as well. If Cooler Master could go ahead and release a subpar plank so we can help even things out, that’d be great.