Last fall, Cooler Master released its first true gaming mouse, and first peripheral under its “CM Storm” branding, the Sentinel Advance. In typical CM style, the company delivered an above-average product that in the end, left us impressed. The mouse featured a good comfort-level, lots of options, a nice design, and of course, flashy LED bling.

Fast forward to the present day and we have the second model to enter the CM Storm line-up, the “Inferno”. Sounds scary, doesn’t it? Compared to the Sentinel Advance, the Inferno looks to amp things up on all levels, and like most high-end mice, tries to become the “ultimate” peripheral in a gamer’s toolbox.

As is standard of CM Storm gaming mice, the Inferno features a couple of unique selling-points that aim to give gamers tons of flexibility. While the Sentinel Advance includes 64KB of internal memory for storing settings, macros and scripts, the Inferno doubles it. In addition, the Inferno adds two primary buttons, “Rapid Fire” and “Macro”. In total, the mouse includes 11 buttons, so we’re inching just a bit closer to the day when a mouse also doubles as a keyboard.

One noticeable feature that’s lacking on the Inferno is the ability to change the color of the LEDs, so in that regard, “Inferno” is appropriate as your only option is red. Fortunately, bling doesn’t make for a better gaming mouse, so for some, that might not matter. And besides, the Inferno still does feature a decent amount of bling. It’s just that it’s only in red.

Like most higher-end gaming mice out there, the Inferno supports a DPI resolution of up to 4,000, and a minimum of 500. You are able to customize each level of the DPI manually, in increments of 1, but whether or not the sensor is actually that precise, I’m not sure. As already mentioned, it also includes 11 buttons, 9 of which are programmable, and as far as performance, the mouse has a polling rate of 1,000Hz and response time of 1ms.

Here’s a quick overview of the specs:

The overall design of the Inferno is one that aims to contour with your hand, although it’s a little bit on the beefier side, so it’s not likely to fit like a glove unless you have rather large hands. Personally, I find the mouse a little bit uncomfortable due to its design, but I’ll talk about that later. As you can see in the photo below, a third of the mouse is glossy, another third rubbery, and the last third a matte plastic. It’s a little different to pair the textures in the way Cooler Master did, but the pictures don’t do it justice… it looks quite good. 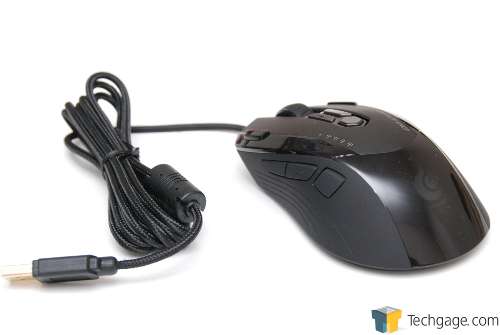 In taking a closer look at the left side of the mouse, you can see the Forward and Back buttons, and also the “Storm Tactics” button. That button controls the macros, which we’ll touch on a bit. You can also see the “Rapid Fire” button directly to the left of the usual left mouse button. Just as it sounds, it acts as a “Turbo” for any regular mouse button you choose.

The numbers (1 – 5) light up depending on your chosen DPI level. For some reason, the #5 wasn’t functioning on my personal unit, but it’s supposed to. 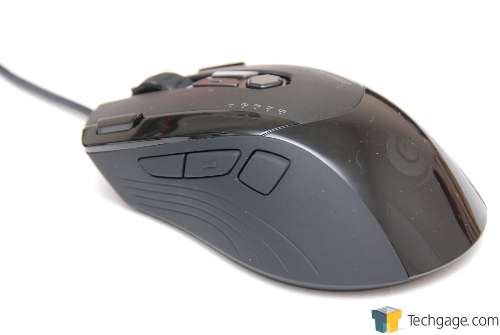 On the opposite side, we can see a much cleaner surface area with no buttons. Like the Rapid Fire on the left, there’s a “Macro” button to the right of the right mouse button, used for a single macro, one per profile. 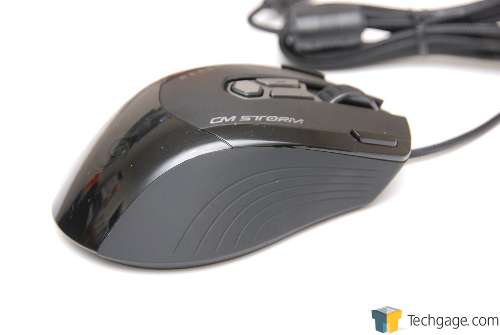 Here, you can get a better view of the front curvature of the mouse, and also another one of the Inferno’s selling-points… a thick scroll wheel. In all my gaming with the mouse, I came to like this thicker wheel a lot, but unfortunately, that joy was dampened thanks to the fact that it’s tough to push. For almost all FPS titles I play, I push down on the scroll wheel to throw grenades, but it’s so tough on this mouse, I’d just have to resort to another solution. 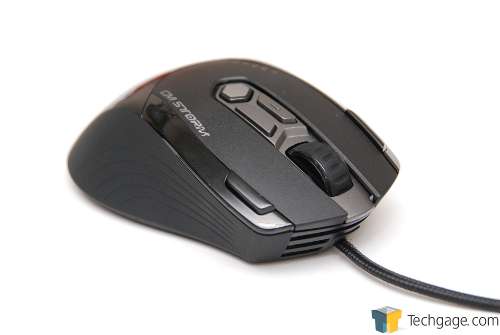 Underneath the scroll wheel you can see the + and – DPI buttons, and also the DPI switcher. This switcher will change color depending on the active profile. At default, it’s not lit up at all. For 1, it’s green, 2 it’s red and 3 it’s a lighter green (or “yellow”).

Taking a look under the mouse, you can better see the front grated area where LED shines out and onto your desk while in use. There’s really not much to say here. 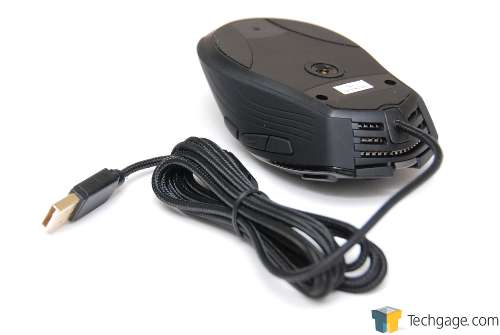 The Inferno has a good design, but it’s not one that impresses me in any real way. I was far more impressed with the physical design of the Sentinel Advance, and found it to feel far more comfortable during use. This factor is of course subjective and depends on the person, but for me, I found that this design caused my thumb to get sore after a while, and that’s the first time in a while I can remember a mouse of any sort causing me any sort of actual discomfort.

When I hold the mouse, my hand doesn’t quite feel “straight”, but rather the pinky finger is a little out of place, because the front right tip of the mouse is pushed out further than the rest, and as my pinky tends to sit there during gameplay, it forces my hand to be in a less-than-perfect position. It’s hard to explain, unfortunately.