Huge, feature-rich cases are nothing new, but the Cosmos II from Cooler Master becomes one of the best – if not the best. The company touts it as being an “ultra tower”, and after shoving lots of high-end hardware into one, we’d have to agree. But despite its mega-size and plethora of features, is it worth $349?

Are you depressed about having to go back to work after the holidays? Upset that the jolly old elf didn’t bring what you asked for? Worried that your “turkey pants” have become your everyday pants? Well our latest case review should put a smile on your face and help you forget about it all, at least for a little while.

Cooler Master has decided to ring in 2012 in a big way with the release of the Cosmos II “ultra tower” case. The term ultra tower may just be marketing hype for what most would simply call a really big full tower case, but there’s no denying that the Cosmos II embodies the word “ultra” from the get-go.

Some of you may be wondering why we’re so late with this review, and the reason is that we’re not satisfied with the status quo. We really want to see what this beast of a case handle so we decided to go the extra mile and build a special high-end system in addition to our standard test system.

With that said, it’s time to put down the left-over drumstick and get out of the ugly sweater from your dear Aunt Agnes, as we find out what Cooler Master’s latest release in the Cosmos series is all about.

The Cosmos II is a monster to say the least, but it has to be in order to support micro-ATX, ATX, E-ATX and the gigantic XL-ATX desktop motherboard form factors along with SSI CEB and SSI EEB server-based form factors. Most of the case is constructed of steel but features aluminum side panels and sliding covers along with plastic accents around the edges.

Hopefully your New Year’s resolution is to visit the chiropractor because the Cosmos II weighs in at 48.5lb and stands 704mm/27.7inches tall, which makes it the largest case we’ve looked at to date. 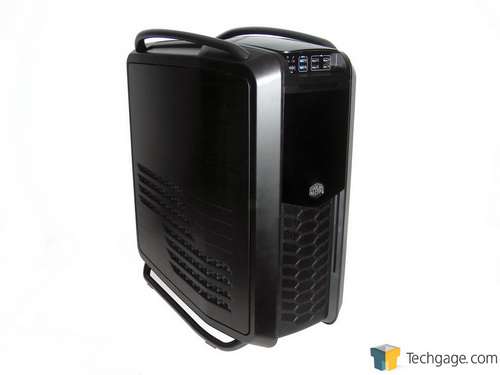 At the top of the front panel is the I/O area made up of the 3.5mm headphone and microphone jacks in the upper left and an eSATA port below. These are followed by a set of USB 3.0 ports to the right that connect internally and four USB 2.0 ports to finish things off. Emblazoned with the Cooler Master logo below the I/O area is a sliding aluminum cover that moves down to reveal the drive bays. 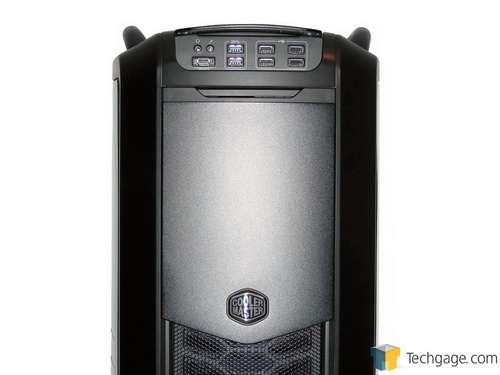 The front cover is held closed with magnets and has enough resistance to remain in place when partially opened. 5.25″ drives can be installed behind the cover in the top three bays while 3.5″ SATA drives can use the lockable, hot swap bays. Each drive bay cover is made of solid plastic and has a raised release latch along the left side. 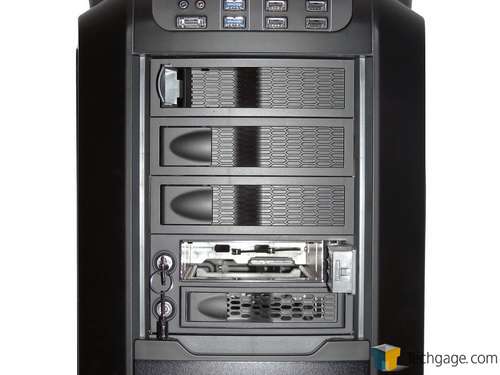 The lower half of the front panel has a metal mesh cover that can be removed with a slight tug outward at the bottom. Behind it is a 200mm LED intake fan that can be swapped out in favour of a single 140mm fan. Seeing how this is an intake fan there is a fine metal mesh on the inside of the removable cover to help keep dust out. 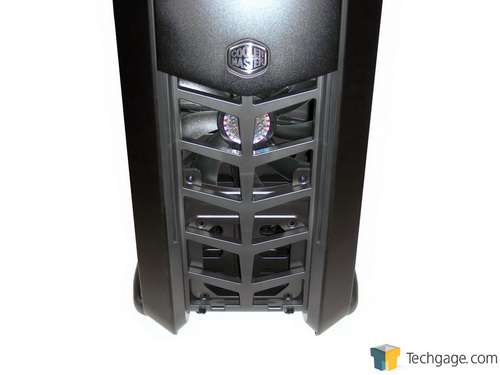 Swinging the case around we see plenty of vents that take up the lower half of the left panel allowing for two optional 120mm fans to be installed inside and as with the front fan, these vents are also filtered. 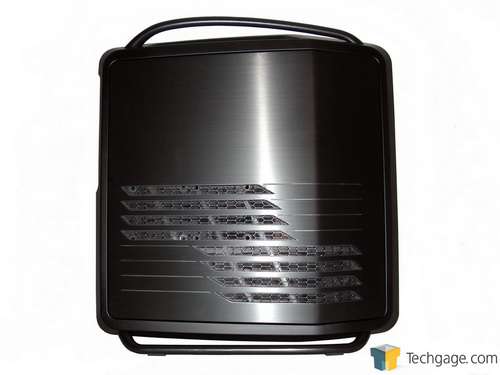 From top to bottom on the back panel just below a thumbscrew used to release the rear section of the top panel are three rubber grommet-lined pass-through holes for water cooling, the motherboard I/O opening and a 140mm non-LED exhaust fan that can be swapped out for a 120mm fan if needed. Further down are the 10 (yes 10!) vented PCI slot covers and an extra vertical PCI slot to the right for items such as a single unit fan controller or cold cathode lighting control should all of the standard slots be used. Finally at the bottom is the power supply opening with a removable mounting bracket that has been pulled back from the frame to allow for extra clearance with longer, higher wattage power supplies. 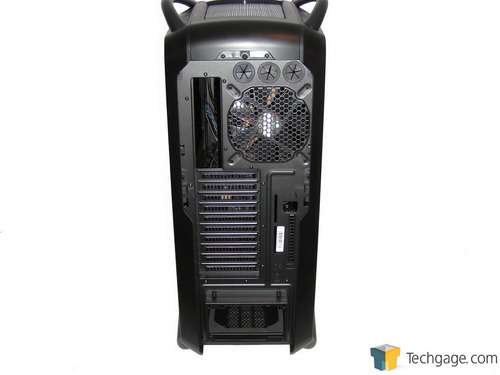 Instead of using screws or thumbscrews like most cases, the Cosmos II features a latch at the midway point on either side of the back panel that release the sides when pushed down. 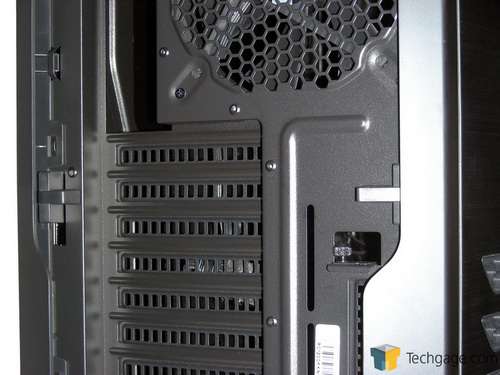 More filtered vents are found on the right side but there are no mounting points to install fans this time. 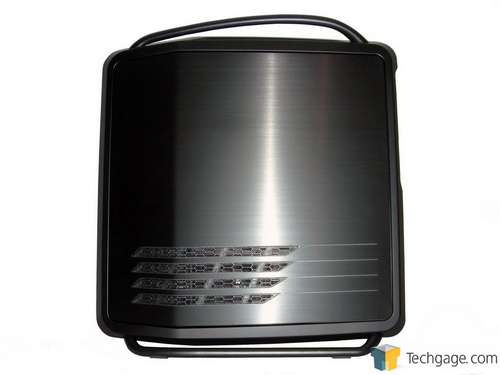 Between the handles that run down both sides of the top panel is another generous helping of mesh that allows air to be pushed out courtesy of a 120mm non-LED exhaust fan. As mentioned earlier, this cover is removed by first loosening the thumbscrew on the back panel and then sliding it back and away. Users can go with three 120mm or two 140mm fans in this location with the option of a single 200mm fan or radiators up to 360mm for some high-end cooling. At the front of the top panel is a second sliding cover, but this time it’s spring-loaded and hides some extra surprises. 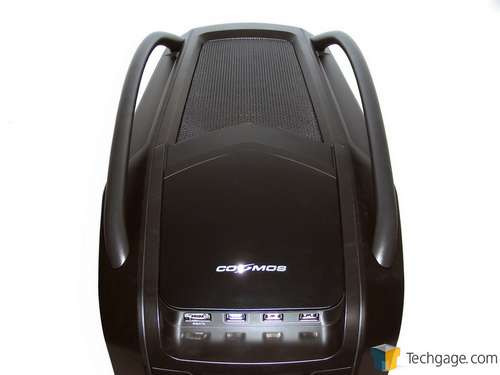 Sliding the top cover back gives access to the built in fan controller that features low, medium and high settings with blue, purple and red LED indicators respectively based on the current speed. On the left are the front and top fan controls and the reset button while the right side holds the hard drive and GPU area fan controls and the LED on/off button to control fan lights. Sitting in the middle is the large power button and the disk drive activity and power LEDs below. Rather than using separate buttons, Cooler Master has chosen to go with a plastic plate that features a metal-like finish that sits over the buttons to create a clean, high-end look. 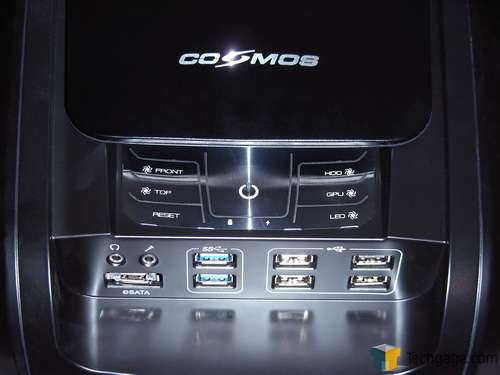 Flipping the Cosmos II up is hard enough when empty, so expect a challenge when it’s loaded. The bottom features bars similar to the ones on top but each has a rubber pad towards the front and back and act as case feet rather than handles – although I’ve used them as the latter when moving this monster. Down each side towards the front are three screws that keep the mounting plate for the lower hard drive cages in place and an air filter at the very back that slides out with a light tug. 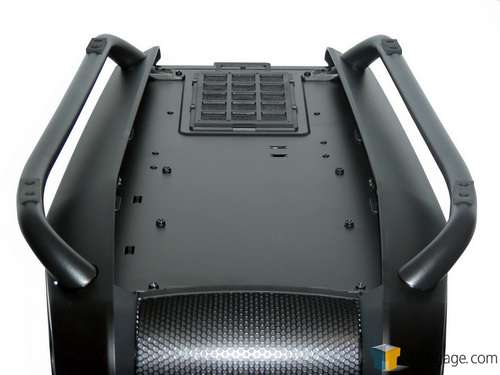 Before a review sample arrives I always do as much research on the product as possible so that I know what to look for, so when it comes to the Cosmos II you can believe me when I say that the best is yet to come.