Keyboard snobs didn’t become snobs for no good reason. There are a lot of crappy keyboards out there. Many feel that a keyboard that doesn’t have mechanical switches in it are not worthy of their attention, and in the past this has been a good argument. With advancements in rubber dome-switches and the like, do they deserve another chance?

I spend a lot of time at a keyboard both at work, and at home. I have a high attention to detail and high standards, so of course a cheap keyboard simply won’t do. I am not a keyboard snob to the extent of some; for example, when I travel (a lot for my day job) I won’t take a keyboard on the road with me, I will just get by with my laptop keyboard, which is arguably one of the worst keyboards on a premium laptop (butterfly switch, 2019 MacBook Pro), but I’ve gotten used to it.

With this snobbery also comes prejudice against the largest portion of the keyboard realm, the non-mechanical switch keyboard, which encompasses many types of keyboards. If you aren’t familiar with keyboard switches and their differences, here is a Wikipedia link where you can learn more.

My first “real” keyboard many years ago was a Logitech G11 which features membrane switches, and I still have it; it’s still a solid keyboard even by today’s standards. My daily drivers as of late have been a Logitech G710+ with CHERRY MX Brown switches, and a Logitech G910 with Romer G switches – a switch only offered in Logitech G-series keyboards. These both have served me well, but one of my planks is giving me some trouble – it’s probably nothing that a deep-cleaning couldn’t solve, but it’s still annoying. When the opportunity to review another keyboard availed itself, I thought “oh, why not, even if it is a membrane style switch”.

I will admit I had to chew over this idea in my head a little, as my prejudice for membrane switches was very real, but Corsair has always brought solid offerings with its keyboards. I’ve reviewed several of them here at Techgage before, and I’ve always been impressed.

The first question you may have is, what is SLIPSTREAM? SLIPSTREAM is Corsair’s latest wireless peripheral interface that uses the 2.4GHz band to provide a better and more stable connection than Bluetooth. It was announced at the beginning of the year at CES 2019, and is an ultra-low latency wireless standard that can do frequency hopping to maintain the best signal. One of its key features is its effective sub-millisecond response time, achieved by doubling the data packets. It does use a little bit more power than plain Bluetooth, but you end up with a more reliable connection. There is also 128-bit AES encryption to keep the connection secure.

Another key feature worth mentioning is the CAPELLIX LEDs. LEDs are already reliable and use very little power, right? They are, but Corsair has stepped up its game for the K57 RGB Wireless (~$99.99 USD), using the CAPELLIX LEDs which are more reliable, brighter, and far more power efficient than traditional RGB LEDs. They’re also a lot smaller, allowing for smoother color transitions.

I’ve always held to the styling maxim of “less is more”, and Corsair has always delivered on this. So much gamer gear is (to me) very tacky and gaudy, but Corsair has always had a very clean aesthetic, and this is consistent with the K57 RGB Wireless as well.

As I stated previously, I am used to higher-end keyboards with premium mechanical switches. This Corsair K57 RGB Wireless has rubber dome switches, and I won’t lie, they don’t feel like a mechanical switch that you may be used to, but that’s not a bad thing.

The SLIPSTREAM Wireless is really good, and I had no issues sitting on the couch 12 feet from HTPC playing games. It’s nice to know that if you went to a LAN party, train, or were in your hotel room, that the 128-bit AES encryption is keeping your keystrokes private. 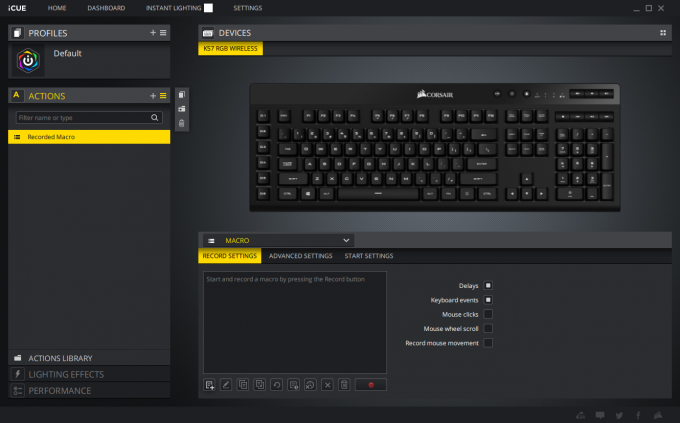 I found that the SLIPSTREAM did use a little more battery than standard Bluetooth, but I am okay with that, given its obvious advantages. The battery life is spec’d at 35 hours when using SLIPSTREAM with RGB, and I found that to be accurate, whereas I was getting around 40 hours with Bluetooth and RBG, as expected. 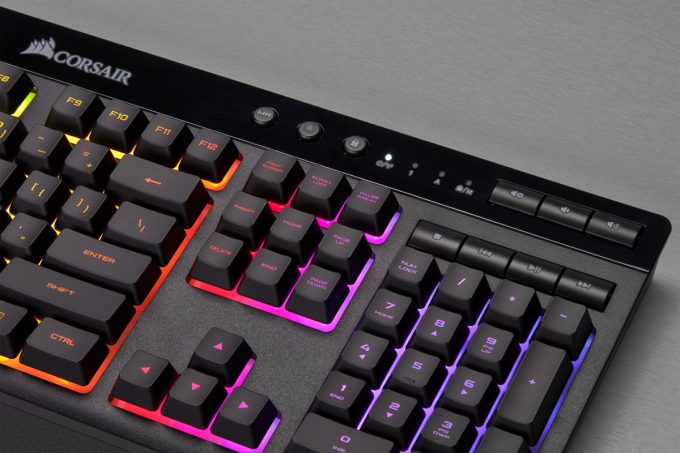