In our look at Corsair’s SP2500 high-end speakers back in March, we were left impressed by the quality offered – especially for the company’s initial offering. With its mainstream SP2200, priced at $100, the company had quite a job at hand to make sure that users received a perfect balance of features and audio quality. Has it succeeded?

Corsair’s impact on the PC audio market can only be described as phenomenal. Coming out of the blue with it’s HS1 headset, it showed that it wasn’t going to do things by half. A month later with the SP2500, Corsair really showed how serious it was about audio. Very few companies could step into a new and highly competitive market with such a splash.

Under review today is more audio goodness with the SP2200 PC Speakers, the little brother to the SP2500 reviewed a couple months back. While the SP2500 catered to the high-end segment with its $250 price bracket, the SP2200 aims for the more mainstream segment at $100.

With the price difference also comes a size and power difference. At half the price of the SP2500, it’s also a quarter of the size with one sixth the power, but don’t let that fool you. The power may be down, but the performance is surprisingly well balanced.

Let’s go over a few details first. The SP2200s are a near-field, desktop PC speaker set taking up a very modest footprint compared to its bigger brother. It’s a 46 watt set, measured again by the FTC method rather than ‘peak’. Of this 46 watts, 30 goes straight to the 6 inch ported sub unit; a good 65% of the total power. Frequency response range is 40Hz – 20kHz. The satellites are fair bit smaller too at 5 inches high but with a 2 inch driver; each channel fitted with 8 watts of power. It’s worth noting that this is half the power of the dedicated tweeter on the SP2500.

So, what does it all look like and what do you get? Well, let’s plunge into the box and find out (and for comparison, let’s place it next to its bigger brother) 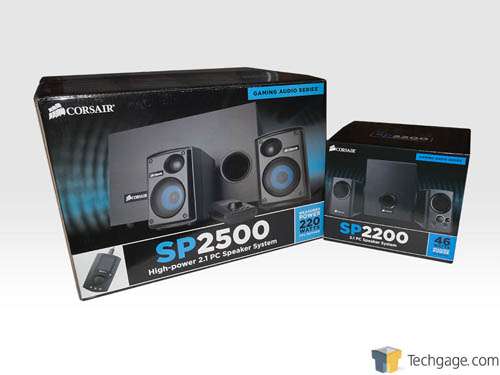 Quite the size difference. The 4th Order system on the SP2500 increased the size of the sub substantially. The satellites remain near enough equal in size. 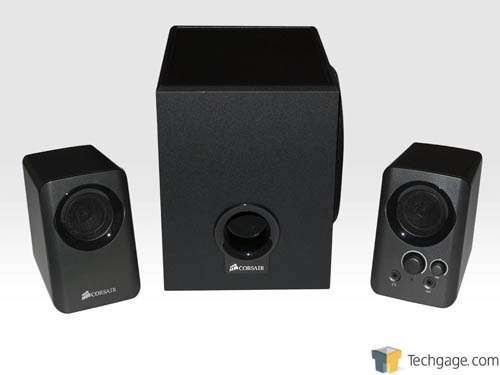 In the box you will find the sub unit, 2 satellites, a power brick, RCA cables and a 3.5mm jack to jack cable. 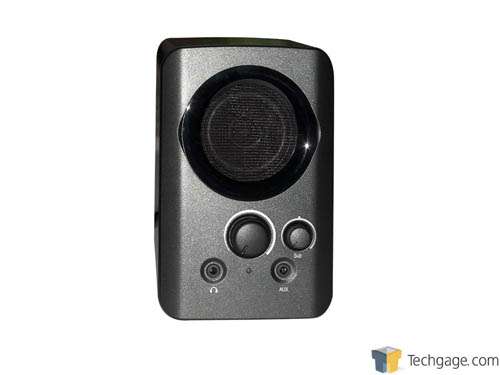 The right side satellite acts as the main control unit for master and sub volume, headphone output, auxiliary input and main input. There are two cables trailing out the back of it, a rather large and pleasantly retro DIN connector for hooking up to the sub, and a 3.5mm jack that connects to your PC. I should note that the DIN cable is remarkably easy to insert. Many a nightmares from yesteryear came about trying to get those plugs fitted, so I’m glad to see this one done properly. My only complaint comes from the inclusion of a super-bright blue LED on the front for power-on… a gentle soft-white would be nice. Out with the electrical tape for me. 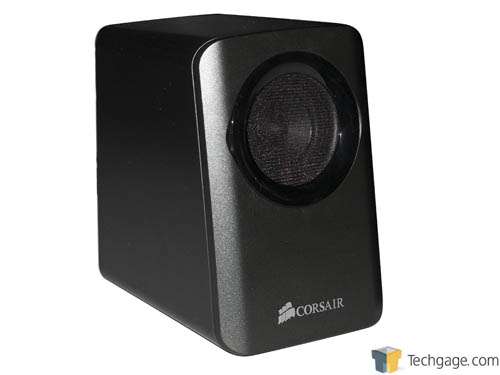 Both satellites are trapezoid in shape, with the woofer facing slightly upward. Instead of matte black, Corsair has gone with a semi-silvered grey front on a matte black body with a glossy black rim for the driver. This left speaker connects directly to the subwoofer with an RCA connector.

Aesthetics have somewhat suffered to keep the price down, but these satellites are not complete eye-sores either, still maintaining the simplicity of Corsair’s other product ranges (except for a certain RAM mod…).