New York City can’t catch a break. In Crysis 2, the city was the battleground as we fought against the alien Ceph and the corrupt CELL organization. But as Crysis 3 quickly proves, New York, along with the rest of the world, is far from safe.

Taking place 24 years after the events of Crysis 2, the game begins by telling us how things have unfolded since. CELL, in its attempt to continue its plan for world domination, captured most of those equipped with the Nanosuit and skinned it from their bodies. One of these victims was Michael “Psycho” Sykes, the protagonist in Crysis Warhead. At the game’s outset, Psycho and others help spring Prophet, returning from Crysis 2, from a storage device – sparing him from a fate similar to Psycho’s.

The Ceph’s intent has always been to eradicate all human life on earth, and while some believed that the aliens were all but wiped out, that wasn’t the case. Instead, our protagonists discover the existence of the Alpha Ceph, an overlord of sorts that has opened up a wormhole leading from its home planet, to earth. You, as Prophet, and Psycho now must wage a war to eliminate the alien threat.

Accomplishing such a thing is hardly easy, however. You still have CELL to deal with, the organization that aims to dominate the world and find Prophet to strip him of his Nanosuit. Saving the world can never be simple, can it?

While Crysis 2 apparently saw the end of the Ceph’s invasion of Earth, CELL’s intent on domination left New York in a state of disrepair. Nature took over, and a rainforest grew unchecked in the war-torn city. Throughout the game, you’ll be traversing more swamps than roads. The game is graphically gorgeous, but its environments are far from pretty.

Crysis 3 doesn’t stray far from its proven formula much at all. In fact, its mechanics are almost identical to those of Crysis 2, with slight modifications made to how upgrades are handled. Your three main Nanosuit modes include Power, Armor and Stealth, and as before, weapons can be configured with different scopes, silencers, laser sights and so forth.

Throughout the game, hidden items exist that could either help you with upgrades, or filling in story blanks. These include Nanosuit upgrade modules, weapon attachments, CELL intel datapads, propaganda posters and blackboxes. 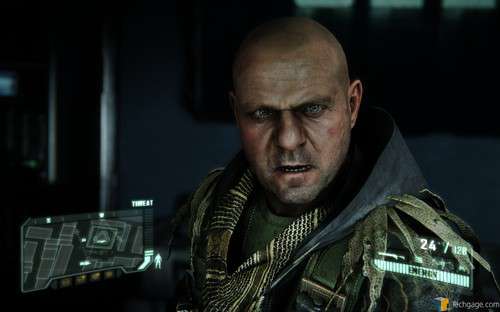 Are you ready for the battle of your lifetime, soldier?

In Crysis 2, you were able to upgrade certain aspects of your Nanosuit with points earned from killing aliens, whereas in Crysis 3, upgrades come in the form of buffs which are earned by finding Nanosuit Upgrade Modules in the wild. They’re sometimes very easy to miss, so it’s worthwhile to keep an eye out. 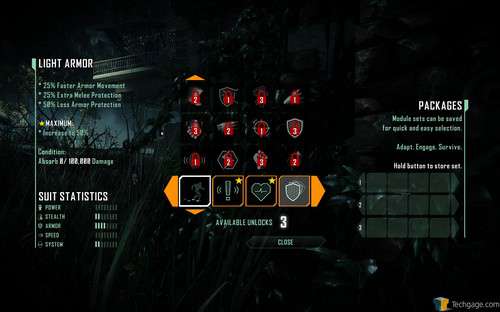 As seen in the shot above, there are a total of 16 different enhancements to acquire, with only 4 (1 from each column) able to be used at any given time. I called these enhancements “buffs” above, because that’s essentially what they are. Each one has the ability to boost a certain ability, and which four you choose to use depends entirely on your playstyle.

Like oh-so-many other FPS titles, Crysis 3 has jumped on the hacking bandwagon. However, there are a couple of slight twists here, such as having the ability to hack turrets in order to turn them on their owners, and the ability to disable a landmine before you cross through a field. 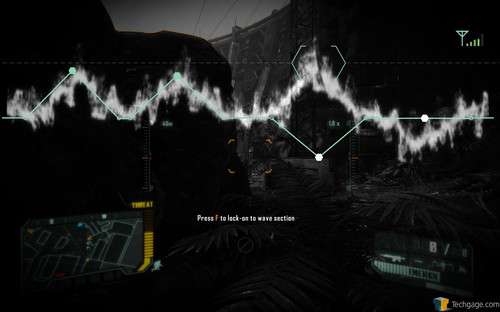 The actual process of hacking is one of the weakest points of the game. When in hacking mode, you’ll see multiple dots that, one at a time, move upwards and downwards. Once a dot is placed inside a set of brackets, you must quickly hit the action button to have it click, and then move onto the next one. Hacking in games is rarely “fun” (maybe Deus Ex: Human Revolution (our review) came close), but this is definitely one of the most boring implementations I’ve ever seen. I even prefer the simple number elimination game in Sleeping Dogs (our review) over this.

Like the other games in the series, your Nanosuit’s abilities are wholly responsible for making your job of seeking out the Alpha Ceph easier. While you can easily have a run-and-gun attitude in the game, that’s often met with death when multiple enemies are in your line-of-sight. I tend to lean towards a stealthier sort of gameplay, so I found myself using stealth mode religiously. There’s just something so satisfying about seeing an enemy thinking about what he’s going to have for dinner that night and then have his neck broken just a moment later. Good luck eating now, buddy.

Important in large gunfights where enemies clearly know of your presence, Armor mode is what might turn an untimely death into a close call. This mode is also important for large jumps down to the ground. 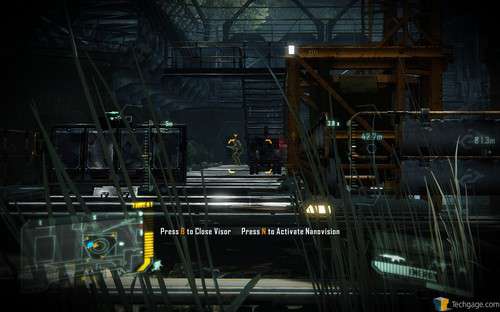 Power mode also makes a return, which speeds you up and allows you to power kick objects towards enemies. This is a mode I didn’t use much at all, because I found it easier to kill enemies with guns than trying to line myself up behind an object to kick. It might help that at lower difficulties, ammo was never a problem. On harder difficulties I can imagine that the power kick might have a far greater use.

Your advanced visor also makes a return, and it’s just as important as ever. With it, you’ll be able to “tag” enemies, guns, ammo and whatever else can be picked up or interacted with. Once out of visor mode, all of the tagged items remain seen with small icons over them, which has its obvious advantages. You’ll be able to track enemies coming around a building so that you can avoid them or ambush them. Knowing is half the battle.

Following nicely in the footsteps of its predecessors, there’s no shortage of guns in Crysis 3. There’s an assortment of snipers, assault rifles, shotguns, sub-machine guns, sidearms and explosives. There are also Ceph weapons that can be picked up off of the aliens that are rather powerful, but run out of ammo quickly. Ceph weapons don’t store on your character like the others, so once you swap to another weapon, it drops to the ground. 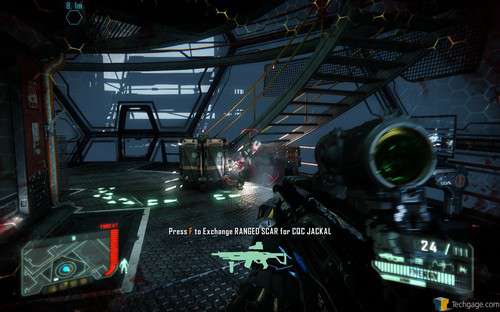 You can carry a total of two regular weapons at any given time, along with the crossbow, a heavy weapon and an explosive weapon. On the explosive front, you’ll be able to use grenades or “R.E.X.” charges which act like C4s and can cling to enemies before you set them off.

“Wait a minute… did you say “Crossbow”?“

Indeed. It seems like an odd inclusion into a game as futuristic as this, but it proves to be one of the most useful weapons in the entire game. Being such a lethal weapon, it can kill most enemies in a single shot, and due to how it integrates with your Nanosuit, it can be fired off while you remain in stealth mode. The downside to this weapon is that its ammo is limited, although numerous refill crates exist through the game.

As ambitious as Crysis 3 is, it won’t take you too long to complete the entire campaign. It took me a mere 6 hours and 40 minutes on normal difficulty, according to the game, although in reality it was closer to 9. I assume that the game resets a portion of its clock after you die, so as to only include real gameplay progress rather than all of your failed attempts.

Crysis 3 also offers a robust multiplayer component, which includes nine different modes. Of these, many will be familiar, but some are rather unique. “Spears” is a good example, where teams must protect Ceph Spears from the enemy. Then there’s “Assault”, where teams much download data from terminals defended by standard soldiers. Similar to Counter-Strike, each player has only a single life. 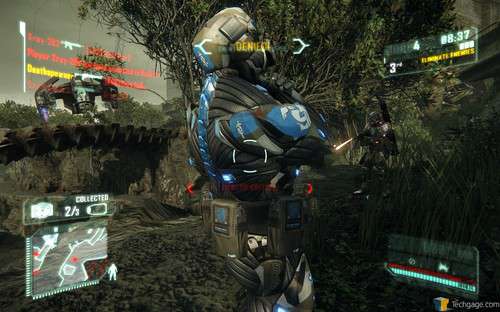 As has become a theme in online FPS games over the past few years, most equipment the game offers is locked until you rank up. Sticking to a same weapon can also help, as the more you use one, the more you attachments you unlock. 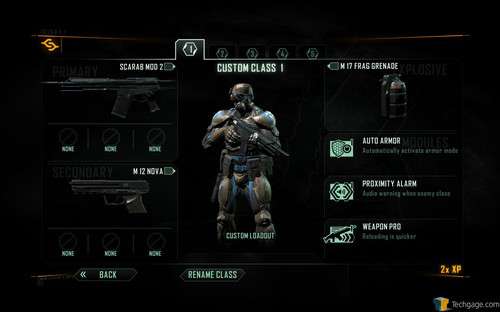 In the brief time I played online, I quickly discovered that I’m truly horrible at it. However, what I did experience was surprising. The multiplayer component is well-constructed and fun, and offers enough depth to keep things interesting for a long while. It’d be great to see this game break the tradition of being a quality FPS that has a lackluster online community just because the game doesn’t have a Call of Duty or Battlefield name affixed to it.