One problem I’ve seen with many large monitors (including Samsung’s 275T is that they don’t allow you to raise them up to a comfortable level. If you back yourself up away from the monitor a good five feet, then it’s not such a problem. But if you sit three feet away like I do (and this is not entirely healthy, I’m sure), then it becomes more of a burden.

Luckily for our 3007WFP-HC though, Dell allows it to be raised so high that a CD could almost fit underneath it. 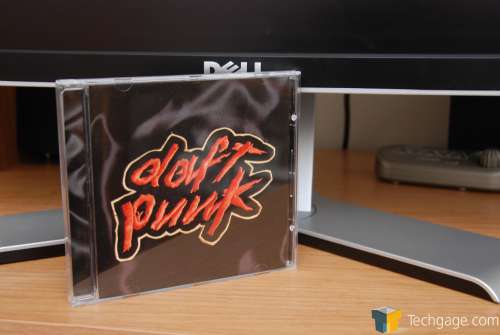 From a side view, you are able to see the tilt factor, which is very nice on this model. Also on this side are the card readers and dual USB connectors. This is about as much connectivity as you will receive with this monitor though. 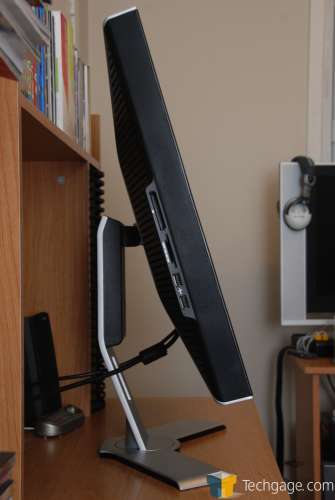 Here is an angle view from the back, which looks almost as good as the front. It’s not near as impressive as Dell’s own 2707WFP, but perhaps we will see a similar 30″ model in the future. 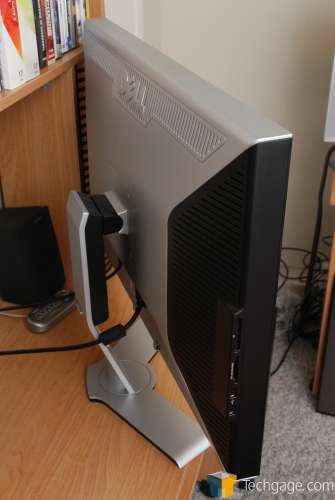 You might be surprised to know that there is no on-screen menu with this monitor, because there is no need. Instead, we have three simple buttons, -, + and power. The – and + buttons adjust the brightness and nothing more. There’s two reasons for the lack of a menu. First is the fact that there is no VGA connector… DVI only. So, there will not be any problems with alignment and hopefully color. The second reason is that there is absolutely no connectivity on this monitor, so there is nothing to configure. 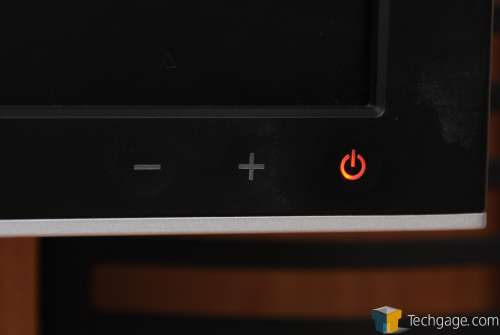 No Component, no HDMI, no S-Video, no Composite… nothing. Given that the 3007WFP-HC retails for well over $1,000, one would expect that there would be at least HDMI or Component, but they are not here, and I cannot wrap my head around it. To me, this model is a minimalists 30″ monitor. So if extra functionality is what sells you, then this is not the monitor for you.

When high color gamuts come into the picture, it normally means that the display is not going to be as bright as a comparative model. This is not always the case though. Dell offers two 24″ models, one HC and one non-HC, and the HC model happens to be the brighter of the two. That’s not the case with our 3007WFP-HC, however.

Another side-effect of the brightness, paired with the enhanced color accuracy, is that there are a few things that will appear different on your screen. For example, take this hyperlink. On most monitors, it’s blue color is easily distinguishable. However, on the 3007WFP-HC, both the regular text and that URL color are so close, it could almost be overlooked.

Yet another issue I found was with regards to backlight bleeding. As you can see in the below picture, there are two primary areas where it’s most noticeable, and whether or not this will be seen on all monitors, I’m unsure. The picture was taken with a half-second exposure in order to enhance the trouble areas, so the picture below shows it harsher than it actually is. 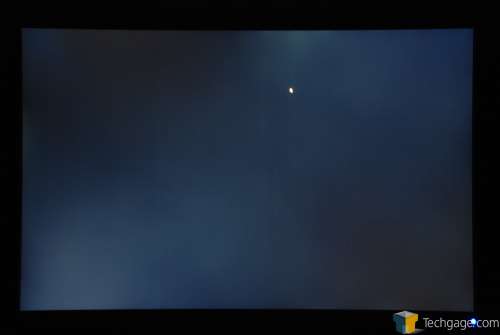 While the bottom-left corner looks to be the worst of the two, I never noticed it during use, and it’s likely to be due to the fact that from a normal standpoint (or sitpoint?), you will be looking down at that section and not up towards it, so it’s not noticeable. But because the top area was above my head during normal use, I did notice whenever the screen went completely black, such as in a game. All CCFL backlit displays have some degree of backlight bleeding, but I haven’t used another monitor where I noticed it this easily.

The severity of the bleeding is on a per person basis. To me, it doesn’t bother me that much, and because I couldn’t spot it on non-black screens, it’s not a huge deal. You might feel differently however, so you can take this for what you will. I could have done without the top backlight bleeding either way though, since it is in an inconvenient location.

All of those gripes aside, the 3007WFP-HC offers great picture quality in both movies and in gaming. In fact, gaming is what I took full advantage of most of the time, because once you try the 2560×1600 resolution, it’s hard to look away. It doesn’t matter what game it is… it will look utterly fantastic on this screen. The lower brightness doesn’t make much of a difference in games, oddly enough. I found all games to be easy on my eyes, despite being only a few feet from the screen.