It’s been a long time since we reviewed anything from Edifier, but with the recent release of the Spinnaker speakers, they were hard to resist. We decided to grab the bull by the horns and take them for a spin. With an eye-catching design, puns out of the way and wireless to boot, will these speakers catch your ear as well as your eyes?

Wireless speaker systems are one of those things that all of us have craved at some point in time; getting rid of all those tripping hazards snaking over surfaces and floors that get knotted up in some unfathomable way.

Edifier may not be as well known as some of the big names in audio, but it’s been producing a number of speaker systems for years now, some of which provide a very compelling and competitive edge over those offered by its competitors, such as Logitech. It’s been a long time since we reviewed anything by the company, so let’s see what it’s been up to.

The Spinnaker speakers are definitely a uniquely styled set. The name comes from the spinnaker sail, which works like a parachute that fills up with wind, rather than having the wind blow across it. This gives it a distinct horn-like appearance. This is not to say that the Spinnaker speakers are filled with hot air (though they do get rather warm), it’s just a name-sake for the shape. 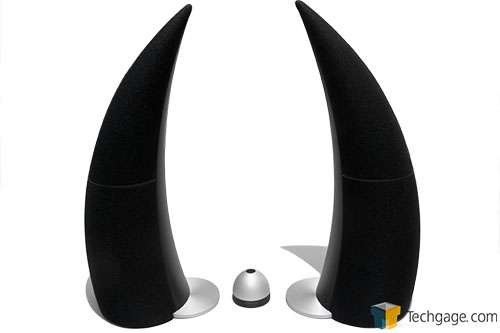 The Spinnaker will take audio input from multiple sources, including Bluetooth over A2DP, optical and an auxiliary 3.5 mm jack, so there are plenty of connectivity options. The optical and jack connections use a shared port, so you cannot use them at the same time. There is also a priority system where Bluetooth comes first and foremost. This I will go into a little later on. 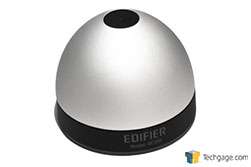 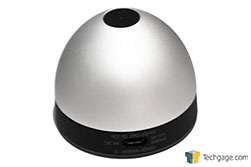 There is a novel aluminum, domed, wireless remote included with the package. It’s battery-powered with a micro USB socket for recharging. This does mean you need either a PC of some kind or a compatible phone charger. The remote can adjust volume, mute, switch input and supports the AVRCP Bluetooth profile for simple navigation between tracks, but cannot pause or stop.

The following table will show you the complete feature list and specifications of the Spinnaker speakers. In the manual and on the website, there is no information given as to the capabilities of the optical input, so I quickly asked Edifier to fill in the blanks.

Edit: Originally left out of this review until I had heard back from Edifier, I questioned them regarding the total power rating and the DC supply unit. These speakers have a total power RMS of 90W, but the DC supply says 60W. Checking the physical unit, it is rated to 20V 2.75A, which is 55W. A speaker system is unlikely to ever draw its full RMS value, since music is dynamic and so too would be the power (bass frequencies requiring the most). I contacted Edifier regarding the power discrepancy, and this was its answer:

“The Spinnaker RMS is a sum of all channel output, the correct way of express [sic] should be, 2x10W(Tweeter)+2x10W(midrange)+2x25W(sub), totally 90W. Since the three channels are mapped to different frequency range, they cannot be measured at the same time.

Power rating of the power supply is normally smaller than the actually power output capability, 1.5 times ~ 2 times smaller normally. Since music power is not constant output power, a tested rating of 55W is enough.”

When going through the speaker specifications, there is one thing that will stand out, if you know what you’re looking for. It has a frequency response range of 68Hz – 20kHz ±3dB. When compared to a lot of other speakers, this all seems rather poor, as quite often the bass frequency range can be as low as 20-25 Hz. The difference here is that the speakers have been rated to within ±3 dB, meaning its frequency response is very linear within this range. This is also why the Spinnaker set has two frequency ranges in its specification, the second being rated to 10 dB.

Another point of interest is that the speakers are triple amplified with a digital crossover (6 channels in total for stereo); the tweeter, mid and bass ranges are on three distinct channels. A point of contention would be that the bass frequencies are handled by a 4 inch speaker, this immediately puts the speakers as a near-field set and also explains the fairly high cut-off point for the bass frequency range. The good news, though, is that you can hook up a separate Sub-woofer due to the inclusion of a dedicated sub connection (which has to be self-powered). This has a cut-off frequency of 100Hz to 20Hz. With a dedicated sub connected, you can then use the speakers as a more traditional home theatre setup.

Each tower houses a Silk Dome Tweeter, Midrange Driver, and a Woofer. Power output RMS is 10W for each Tweeter and each Mid, with 25W to each Woofer. Total output is 90W RMS. For a $350 set of speakers, this power level may be a little low, but in all honesty, it doesn’t matter, the Spinnakers can get seriously loud and without any perceivable distortion. 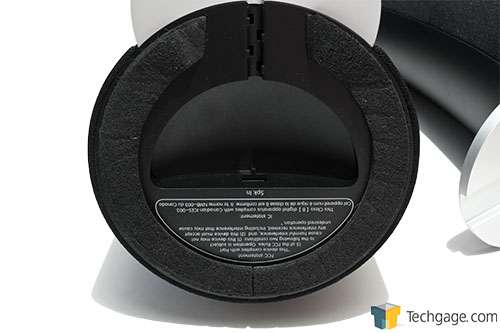 While the sub drivers are only 4", they can still pump out a fair bit of bass, even if it does have a fairly audible resonant peak in the 80Hz range (you can feel the speakers vibrate the desk more in this range). The subs are also downward facing and this does lead to some rattling in the desk or floor . The feet are well padded, but could do with a little extra, especially when the cables are taken into consideration. 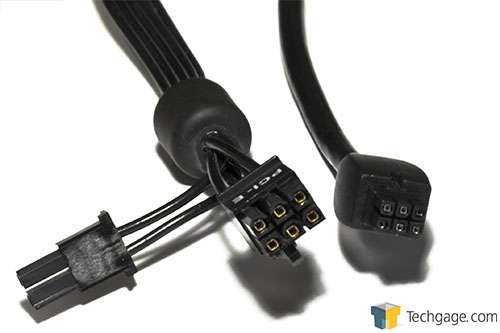 Speaking of cables, to accommodate this three channel crossover, the left and right speakers are not hooked up in the usual manner. Much like the Corsair SP2500 did, a more unconventional connection had to be used in something not too dissimilar to a 6-pin PCIe power cable. While the SP2500 used a standard 4-pin ATX cable where a replacement could be made or bought if necessary, the Spinnaker’s do not use standard parts, so a replacement cable is not easy to come by. At some point, additional cables will be made available as accessories, including a longer 3m cable, rather than the included 1.5m; this will then give you some play for a home theatre setup (when available). 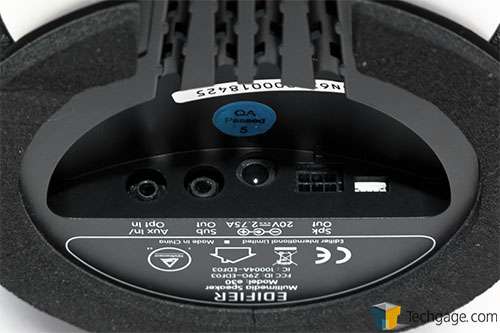 To keep the aesthetics as clean as possible, all cables are handled in the underside of the right speaker, and I must say, it gets very crowded and extremely tight when trying to fit them all, especially the 6-pin. Since the speakers will work with Bluetooth, only two cables are required, power and left channel connection. No speaker will ever truly be wireless, but at least cables can be kept to a minimum.

While experimenting with the various options, the Spinnaker speakers prioritize Bluetooth over all other connections. This is useful for mobile devices, since then there are no options to fiddle with thereafter to get things working. Problems did arise with this regarding Windows. By default, Windows uses an auto-discovery feature to keep track of any devices that may be nearby; when it comes to the Spinnakers, this discovery will force the speakers to switch to Bluetooth, regardless of any current input source. Using the Spinnaker remote to switch inputs works fine, but Windows discovery will kick in every 30-90 seconds, depending on settings, switching inputs each time. For sanity’s sake, it’s best to disable auto-discovery, at least for Bluetooth audio on Windows if you plan to use multiple inputs.