Since this board was first released, eVGA has released many more based on different NVIDIA chipsets. However, this board still sits on top as their prime offering. There are many things that I enjoy about the 680i, but also a few things I am equally not that impressed with.

The overclocking ability is not as good on this board as I have seen on others. When I first received the board, hitting anything over 350 FSB was a non-possibility. However, once they released the P27 BIOS, it seemed to improve mine, and many others overclocks. With the P27 BIOS, I have managed to hit 450FSB, which still falls a little short to a few other boards. The ASUS P5N-E for example could hit 495, while the P5K3 and P5K hit 475.

So if you are planning on the highest overclocks possible, then this board might not be for you. It might be wise to read around for other experiences though. With the Intel Q6600 installed, I was unable to hit close to 400FSB, while others were able to go beyond. It could be that I received a less than ideal board, I’m unsure.

That aside, the actual overclocking options in the board is not as thorough as a few others on the market, such as the ASUS Commando and DFI RD600, but I’d be hard pressed to see 10% of enthusiast overclockers touch all those secondary options anyway. It’s a time consuming process with little benefit.

The board layout is one area where I don’t really have any complaint. Modest coolers are used, so unlike the P5K3, you can actually pick the board up without straining yourself. I still do find it odd that the ATX case connectors are located where they are, as it’s inconvenient. Aside from that, it’s a good layout overall. 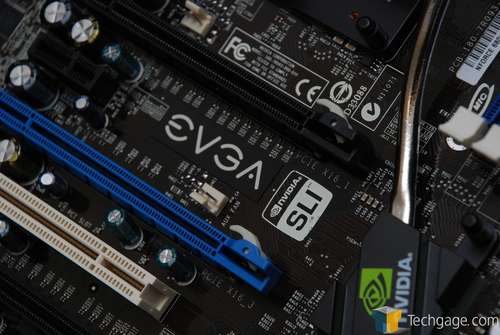 Of course what most will care about though is performance, and this is where the 680i fell short. Granted, it primarily fell short to the P35 boards, which were released long after this board was. Compared to the Intel XBX2, it performed well. The downside for this board is that the ASUS P5K DDR2 board performed better in almost all of the tests.

But how about when prices come into play? Perusing a popular e-tailer’s site, the ASUS P5K Deluxe board retails for $225, while the eVGA 680i retails for around $210. Despite the slight savings, I would still jump at the P5K quicker as it proved better performance and also allowed a higher FSB overclock.

That’s not to say that the 680i is a bad board, it’s far from it. Had I reviewed it months ago, it could have been a different story. The biggest gripe I had was with lack of overclocking ability, but the P27 BIOS patched up a lot of the issues there.

If you are an eVGA fan and want their board, then you will not be that disappointed with the 680i as long as you are not looking for extreme CPU overclocks and a slew of board extras.