by Rob Williams on July 27, 2012 in Editorials & Interviews, Mobile

I’m proud to say that I’m no longer a tablet virgin, so what better way to celebrate than to tell everyone about how magical the experience can be? Equipped with an ASUS Transformer Prime, I’ve customized, downloaded, read, played, tweaked, watched and even rooted, finally reaching the obvious fact: tablets are cool.

In the editorial I posted this week tackling piracy on Android, I mentioned that I was a late-bloomer where smartphone adoption was concerned. It wasn’t that I thought I couldn’t make use of one, it’s that I didn’t want to. I was a PC hardware guy, not a mobile guy. Suffice to say, I was naive and ended up loving my smartphone a lot.

What about tablets? The thing about tablets is that I wanted one even less than I ever wanted a smartphone. When Apple released the first iPad, I laughed it off. But as so often happens, certain ideas wore me down over time. Tablets would be cool for the odd game, I guess, and to manage to-do lists, to play mahjong and best of all, to read some books.

Still… I held off – until a couple of weeks ago when I was offered an ASUS Transformer Prime at a price I couldn’t refuse. Yes, Prime, as in the TF201, the first quad-core Tegra 3 tablet on the market. When ASUS released this beast seven months ago, it was jaw-dropping, and you know what? Even with the Infinity TF700 upon us, it still is.

This article isn’t a review of the tablet, per se, though I will be talking about it. The main purpose is for me to spew off my initial impressions from using a tablet for the first two weeks – and believe me, I’ve been using this thing. While I once thought that the iPad was a foolish idea, now I’m sold that everyone should have a tablet. Oh, and I have to give credit to a good friend who assured me tablets would be future even though I disagreed with him – years before Apple released its iPad. Well played. 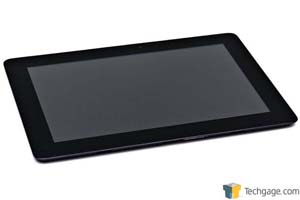 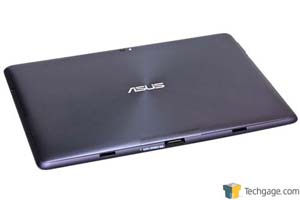 Even though I’ve been following tablets for a while, I haven’t used one hands-on for more than a couple of minutes. But it’s when you get to use one for a longer period that you begin to appreciate how useful one can be. It can also help you appreciate just how gorgeous and well-built some of them are.

This is especially true on the ASUS side, which is no doubt part of the reason why Google chose the company to build its Nexus 7 tablets. The TF201 is sturdy and doesn’t bend in any way. I wouldn’t want to drop it on a hard floor of course, or use it as a projectile weapon (possibly a melee weapon), but it feels like it’s built to last. It’s aesthetically-pleasing as well, if not a little classy.

The screen resolution here is common, 1280×800. On a desktop PC, that resolution would kill me, but on a tablet, it’s sufficient. The biggest bottleneck is being on a website with a super-long page, but if you’ve ever used a similar resolution on the desktop, you know just what I mean. You can always go vertical to help negate the issue. 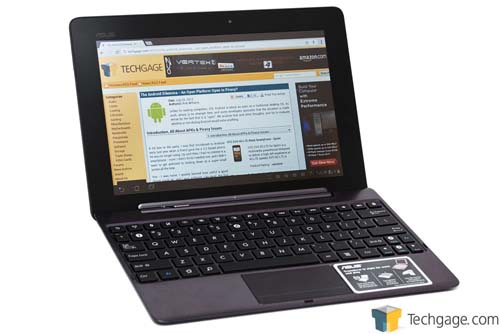 Like ASUS’ other tablets, the TF201 can be equipped with a perfectly-matching dock, creating a tablet / notebook hybrid. In this configuration, you can use the trackpad to move a cursor around the screen (very strange at first when you have only used it as a tablet for a while), and you can use the keyboard to type easier (but oh man is it cramped!).

The other benefit is that it almost doubles the tablet’s battery-life. My only complaint? The fact that the keyboard can’t dock behind the the tablet somehow, so that people could use it like a double-width tablet.

The screen? It’s a lot better than I expected, to be honest. Colors pop, the graphics and fonts are clear. It’s also bright. Its Super IPS+ mode is meant for use outdoors, and I can see why. Turning it on cranks up the brightness to levels that wouldn’t be too comfortable indoors. 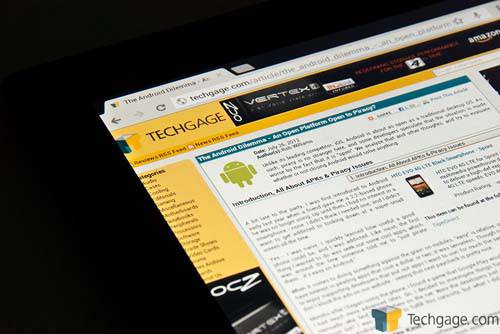 Overall, the TF201 has impressed me a lot. I’ve been using it for everything from simple apps to games and even reading. Reading actually pointed out one more flaw about the device: mild screen burn. After reading for even a half an hour, going to a flat-colored screen would reveal an obvious book pattern in the background. I’m not sure why this is, but the problem never sticks around for long (thankfully).

Enough about the tablet; let’s talk a bit about what I’ve been doing on this thing. This tablet offers me the first chance to spend a good amount of time with Ice Cream Sandwich, and compared to Fluffy Nutputty or whatever 2.2 was codenamed, I’m fairly impressed. It’s a nice step-up from 2.x, and the flexibility is just what I’d expect.

I wasn’t too crazy about the launcher that ASUS bundled with the tablet, however. It wasn’t too easy to move things around on a screen or to move something from one screen to the next, and navigating for a new widget was an eyesore of a process. Within an hour or two of turning the tablet on I was installing GO Launcher HD. If that name sounds familiar, it might be because I wrote about GO Launcher EX earlier this year, which I still love. The HD version isn’t as feature-rich as the EX variant, but it’s a stellar launcher right ouf of the gate as you’ll see on the next page.