As with most cases, installation of hardware should not be that difficult. While there have been a few exceptions here at Techgage, almost every hardware install into a PC has gone as smooth as humanly possible. Fortunately for us, the process with the Anubis was mostly trouble free.

The only significant problem that we ran into was when we attempted to install one of our testing drives, a Seagate ES Barracuda 750GB, into the drive cage. This is the same drive that we have used in many other tests but unfortunately that streak ends with the Anubis. It would seem that to accommodate the added capacity, Seagate raised the height of the drive ever so slightly… just enough to prevent it from sliding into the drive cage of the Anubis.

Curious, we then tried other drives that we had lying around including a Western Digital Raptor and a few other drives from various other manufacturers. We ended up using a Seagate 320GB drive in lieu of the thicker 750GB test drive. All in all, we were disappointed that all of the drives we had on hand didn’t fit in the drive cage.

With everything installed, it’s time for a few pics. Please understand that the pictures were taken shortly before our trip to AsylumLAN 30 so there is a pair of 120mm fans installed in the case. Throughout our testing, neither the front intake fan, nor the rear exhaust fan were installed as we wanted to represent as accurately as possible what anyone can expect from this case as it comes stock from Hiper.

One thing to notice in the pictures is the room given to work with. While the Anubis lacks the convenient space behind the motherboard tray to store and route cables that the Antec P182 does, there is ample room to tuck unused cables. 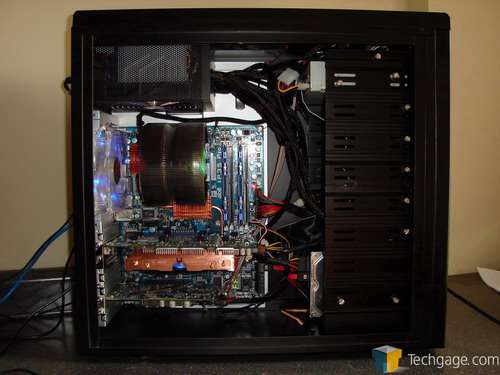 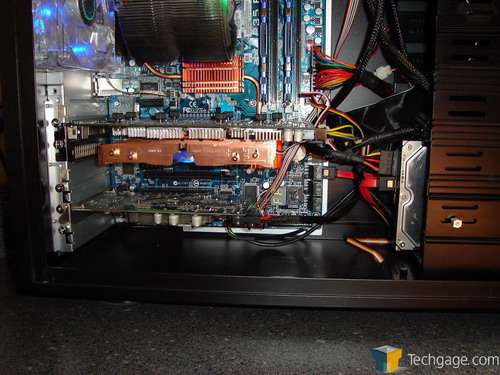 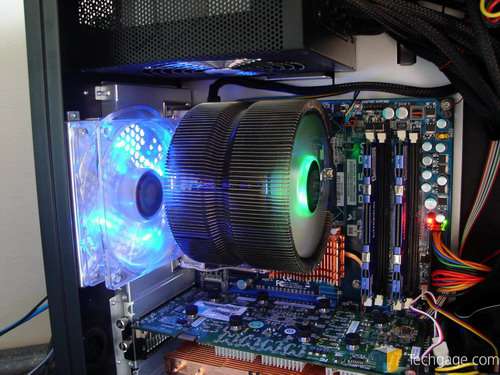 In attempt to stay as consistent as possible, we have installed the same hardware used in previous case reviews and with the exception of the hard drive; the rest of the specs should look familiar to most.

Our testing procedure is pretty straight-forward. With the hardware installed, our testing is done with all side panels on the machine; we stress both the CPU and GPU by running stress testing software. For the CPU, we used a simple program called CPU Burn-In v1.01. This is a small program that brings each individual core up to 100% load, all the while monitoring for errors in calculations. I have used this tool for a long time now and it has done a good job of heating up CPUs through stressful computations.

For the GPU, we stressed our 8800 GTS using a tool many of you may have used. Real-time high dynamic range image based lighting demo, or RTHDRIBL for those of you playing at home, is a great little tool for testing the stability of GPU overclocks as well as heating up a video card when you needed (our case.)

Both of these tools are free to download and should you like to test your hardware, they are straight foreword and easy to use.

With those numbers in mind, we re-ran the same tests with a pair of fans installed in the front and rear of the case. While the total system was a bit more audible, and for obvious reasons, the temperatures of the system dropped a few degrees. This was quite noticeable on the video card as it was directly in the line of airflow from the front fan.

Installing a pair of fans is an obvious path to take for most, to simply install fans where needed, but something that Hiper clearly looked past but more on our views of this later. Here are our results with the fan spaces populated.