Also check out our look at Intel Core i9-9900K performance in Linux.

As soon as AMD released its first Zen-based processors in the spring of 2017, many people began to wonder: “What’s Intel going to do to keep things interesting?” Well, while the company has been struggling to get its 10nm products out the door in wide volume, it’s been in a privileged situation where it has had the capability to strike back. That’s not a reality afforded to many.

Not long after Ryzen launched, we saw Intel introduce Core X-series months later. Suddenly, 10-core processors didn’t seem so impressive. Instead, we have 18-core processors today at-the-ready, with the promise of a 28-core Xeon to come soon. It’s probably safe to say that the idea of owning a 28-core Xeon could be scrapped unless you plan on spending many thousands of dollars on only the CPU.

Intel followed its Core X-series up last summer with the 8th-gen Coffee Lake processors, ushered in with the help of chips like the six-core Core i7-8700K. At the time of its release, the 8700K was heralded for its outstanding single-threaded and gaming performance. Fast-forward to today, and the new i9-9900K is being touted for the same things. So, the 9900K is like the 8700K… just better.

We’re not sure how a chip like the 9900K earns a Core i9 denotation, but there are many reasons why Intel’s top “mainstream” chip is worth a look. The obvious difference between it and the 8700K is that it offers 8 cores, and 16 threads. In the grand scheme, that’s actually a bit boring. What’s far from boring is a 5GHz clock speed, which applies to 1- and 2-core Turbos. The 9900K will only then back down slightly to 4.8GHz per-core with 3- and 4-core Turbo, and settle on 4.7GHz for 5~8-core Turbo.

Normally, a CPU will drop its clock speed down dramatically between a 1-core and all-core Turbo, but the 9900K shies away from that, becoming one of the most aggressive chips we’ve seen. A 300MHz drop between top and bottom might not mean much if the clock speed was modest to begin with, but we’re talking about 4.7GHz~5GHz here.

What that ultimately means is that technically, the 9900K should deliver the best possible single-threaded performance, which is pretty much most of your general use computing. Measuring something like that in the real-world is mind-numbingly difficult, but benchmarks can fortunately help paint us an easier-to-understand picture.

Before moving onto a look at test specs and benchmarks, here’s an overview of Intel’s current-gen lineup:

On the mainstream side of the fence, Intel currently offers three different 9th-gen SKUs, with the 8-core i9-9900K leading the pack. The i7-9700K follows the 8700K by upping the core count by two cores, but at the same time shaves off HyperThreading. Intel clearly had to do something to further differentiate the top two chips. The i5-9600K delivers an Intel 6-core at a cheaper than 8700K price, at $262/1,000 units.

The mainstream chips stick to the usual dual-channel memory controller, while the enthusiast platform bumps that to quad-channel (matched by AMD’s Ryzen Threadripper platform). For those with big bandwidth needs, that platform could be better-suited than the mainstream one. The same goes for anyone with a need for lots of PCIe bandwidth – that’s still best taken care of on the enthusiast platforms. 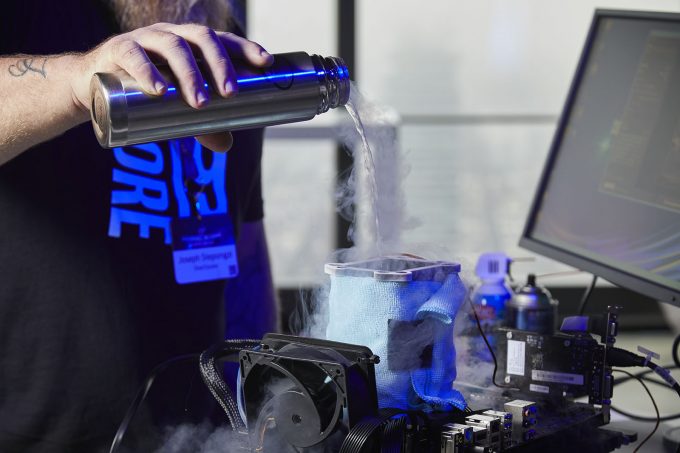 All three of Intel’s 9th-gen mainstream chips share a TDP of 95W, which probably means that one of them is lying. While the 9900K adds HyperThreading to the mix, versus the 9700K, it also boasts an additional 4MB of level 3 cache.

If there’s anything strange about this lineup, it’s probably the fact that the 9900K is an 8-core chip, and the 9900X is a 10-core one. That’s a weird overlap, and one that could be confusing to the regular consumer – especially since one of those chips costs literally double the other one. I admit even I was confused for a time about this. Perhaps the 9900K should have been called 9700K, but what fun is there in making sense of everything?

A nice thing about this 9th-gen launch is that these new chips will work in most last-gen motherboards. That means that you could upgrade your rig to a new chip but opt for a last-gen (and hopefully less expensive) motherboard. We’d implore you to double-check the support page of the board in question, though, to make sure that an EFI update that adds support for the latest CPUs is in fact available.