We’re going to kick off this performance look with a handful of encoding tests. Encoding is one of those scenarios that can be extremely hit-or-miss when it comes to taking good advantage of big CPUs. Sometimes, applications will give the impression that they’re making proper use of the CPU, but we’ve found more than once that some applications actually just use the entire CPU very poorly.

Fortunately, the situation is getting a lot better over time. As an example, for most of its life, Adobe’s Lightroom didn’t use more than a few cores and threads. Today, the application can use most of whatever CPU you can hand it, although we’re not sure it uses it entirely effectively.

A couple of tests were scrapped for this article that were present in the 2990WX review, including DaVinci Resolve and Agisoft PhotoScan. PhotoScan didn’t give expected results, likely due to the fact that we didn’t detail the testing procedure well enough when we began running the test for that previous review. DaVinci was skipped over for the simple fact that our tests need to improve. HandBrake also got a cut because of issues with previous testing, but for up-to-date performance there, check out our look at i9-9900K Linux performance.

In time, we plan to add DaVinci back in, as well as some others, like Capture One. If we can ever get reliable repeated testing out of Adobe Lightroom, it will hopefully be reintroduced at some point, as well.

Tests on this page include Adobe Premiere Pro and MAGIX Vegas Pro video encoding, as well as FLAC to MP3 conversions with LameXP. 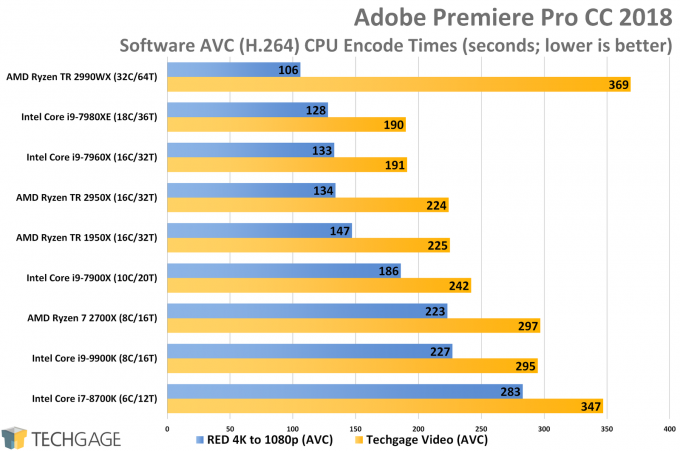 From the get-go, we can see the Core i9-9900K make a considerable difference with these encodes in comparison to the last-gen six-core 8700K. This isn’t something we see too often, but somehow AMD’s 2700X manages to not just catch up to the 9900K, but beat it out ever-so-slightly with the 4K to 1080p encode.

At the top of the chart, we can see that Premiere Pro isn’t designed for a chip like the 2990WX, although it’s highly expected we’ll see that fixed with future builds. Ultimately, these CPUs scale close to what we’d expect, but adding a GPU into the mix changes things up a bit: 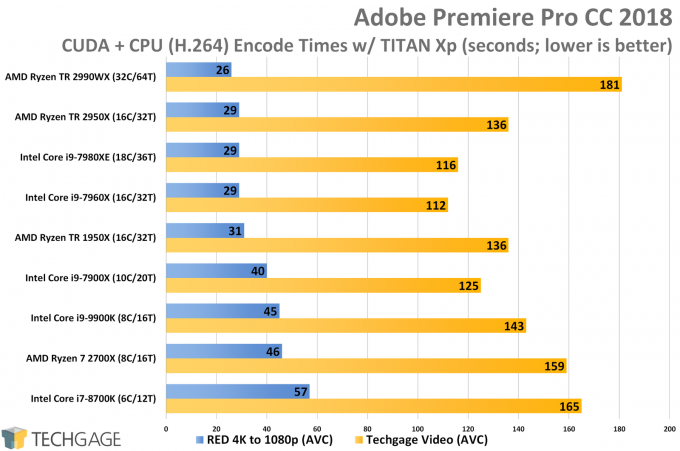 The 2700X beat out both the 8700K and 9900K in the software encode, but add CUDA and the GPU to the mix, and the 9900K suddenly overtakes AMD’s competing eight-core. This kind of thing isn’t too surprising given how we’ve seen Premiere Pro perform in the past, but it’s interesting nonetheless.

The differences here are not so extreme that it makes a decision between AMD and Intel an easy one. In some regards, it’s just nice to see the 2700X compete well, since multimedia encoding is a definite Intel strong-suit.

Does anything change with an encode from an 8K source? 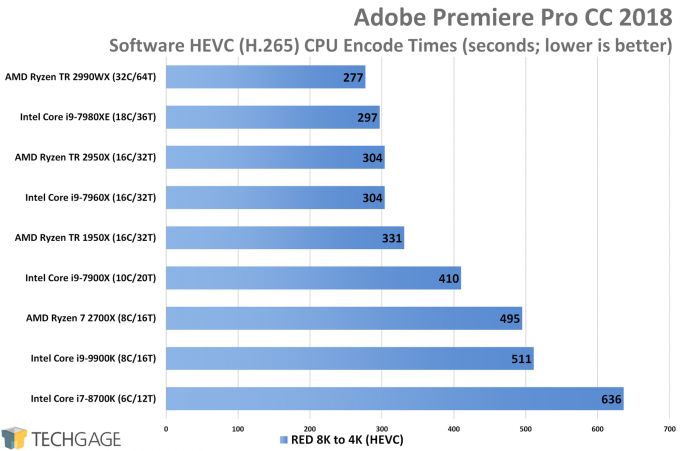 Yet again, AMD’s 2700X performs very well with these CPU-based encodes, beating out the 9900K and its older 8700K brother. After that point, the encode scales quite well up until the 16 core chips are introduced. With those many core chips, the gains are very difficult to appreciate, meaning that there is such thing as too much CPU for some encode tasks.

How does CUDA change up this one? 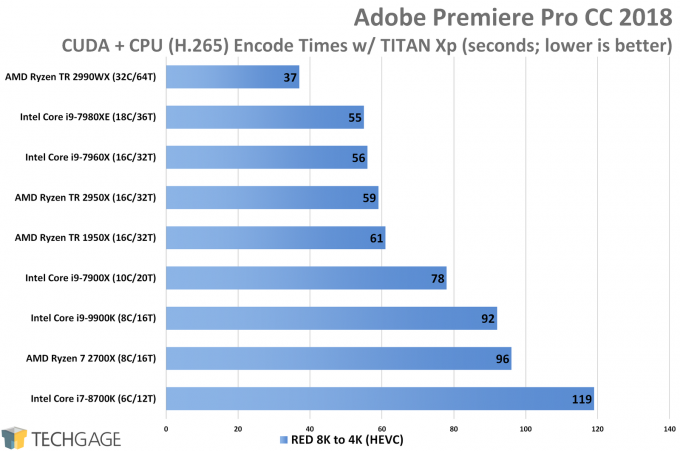 Rinse and repeat: AMD falls behind the 9900K here, but keeps ahead of the 8700K. Somehow, adding a GPU to the mix for heterogeneous encoding benefits Intel more than it does AMD. But… as optimized as Premiere Pro is for Intel, it’s also optimized for NVIDIA, so the two are a perfect match, much to AMD’s chagrin.

Ultimately, AMD performs very well overall in comparison to the 9900K, CPU+GPU encoding aside. It actually performs better than I expected it to, so let’s see if that carries on over to the MAGIX Vegas encode. 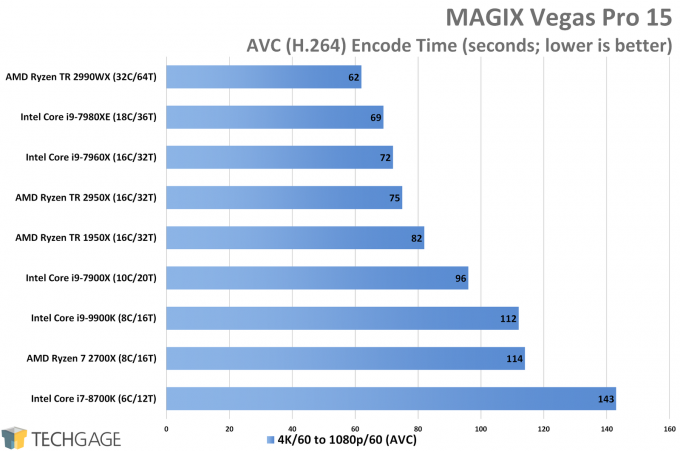 AMD’s Ryzen 7 2700X outperformed the 9900K in Premiere Pro’s software encode tests, but roles were reversed when CPU+GPU encoding was introduced. We see that same kind of scaling in MAGIX Vegas Pro, although it’s important to note that this encode is completely CPU-driven.

This article is about the 9900K, but we can’t help but continue to be impressed with the 2700X, as we didn’t expect it to keep up to the 9900K so well in these tests. Another important angle to look at this from is with the 8700K: the new 9900K is a substantial upgrade, although that of course doesn’t mean it’s a worthwhile upgrade if you already own an 8700K (you may wish to wait for the next-gen equivalent). 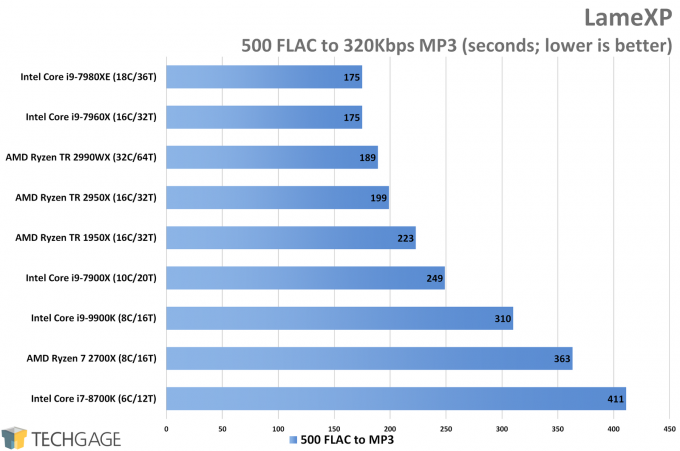 Music encoding isn’t as popular as it once was thanks to the advent of streaming services, but if you’re still devoted to your own digital music collection, the time may come when you need to convert one format to another, and if that time comes, a bigger CPU is going to come in handy.

LameXP is a free tool that takes great advantage of modern CPUs, allowing them to encode up to 32 tracks at once. In our case, we take 500 FLACs and encode them to 320Kbps MP3s, representing the scenario where someone takes their lossless ripped audio CDs and encodes them to high-bitrate audio for portable use.

While LameXP is very scalable, it doesn’t behave incredibly well on AMD’s Threadripper 2990WX, which could owe some of the blame to software updates that need to come along – namely for Windows. Or, it could simply be an architectural design quirk that causes the performance to drop. Either way, it’s nice to see scaling like we do from the 6- to 16-core chips here.