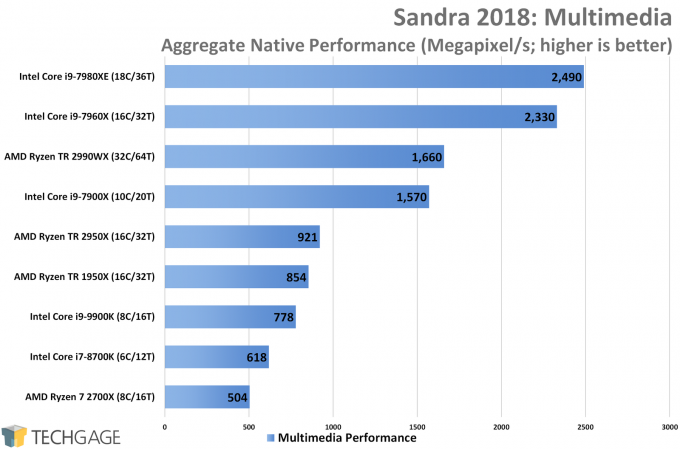 Intel typically performs extremely strongly against AMD in any multimedia test, although our Adobe Premiere Pro tests earlier proved that there are exceptions to some rules. Still, it simply can’t be argued that Intel offers the best multimedia performance, and this Sandra chart proves it, where the 8-core Ryzen falls behind the 6-core Intel.

Naturally, you’ll want to pay more attention to the real-world tests, but if a solution takes advantage of Intel’s bells and whistles, it’s going to make a difference. Even the 32-core 2990WX struggles to come even close to Intel’s 16-core. 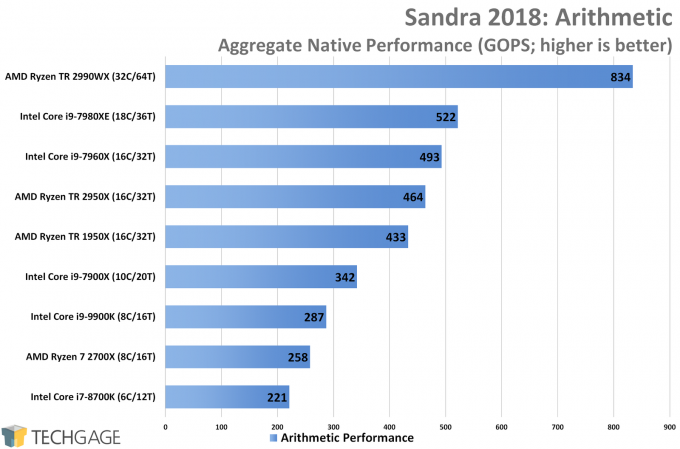 With Sandra’s Multimedia test, Intel had a clear lead, but normality returns with this Arithmetic test. Here, the 2700X slides in behind the 9900K, though by a notable distance. As a synthetic test, it’s little surprise that the results here put the 9900K at about 30% faster than the six-core 8700K.

We’ve probably mentioned the 2990WX too much already, but when it sits on top of so many charts, it’s hard to ignore. This is one test that takes great advantage of as many cores as you have, so the 32-core chip sits pretty at the top of this chart. 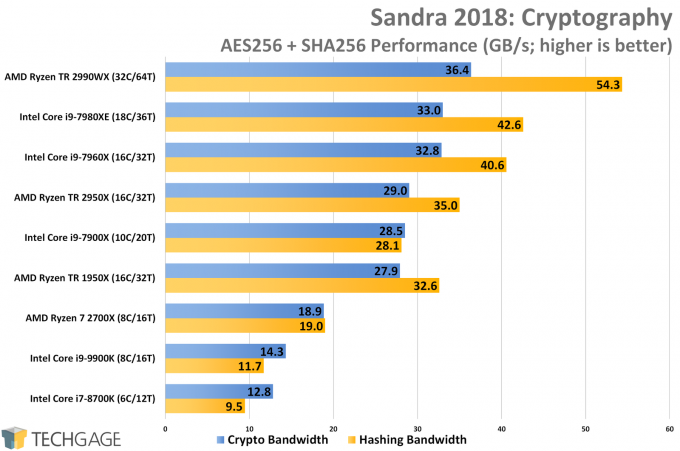 AMD didn’t perform spectacularly well in the encryption test from our Linux performance look, but with Sandra, it simply dominates. The Ryzen 7 2700X sits well ahead of the 9900K, and likewise the 8700K.

This is one test that offers very interesting scaling between the 9900K and 8700K, as the gain is a meager 11%, which is a stark contrast to the nearly 30% we’ve been seeing from most other tests. It’s almost too bad that mining wasn’t still relevant – AMD might have a hard time keeping the 2990WX on the shelves. It’s especially notable that the $1,000 16-core 2950X outperforms Intel’s $1,000 10-core. 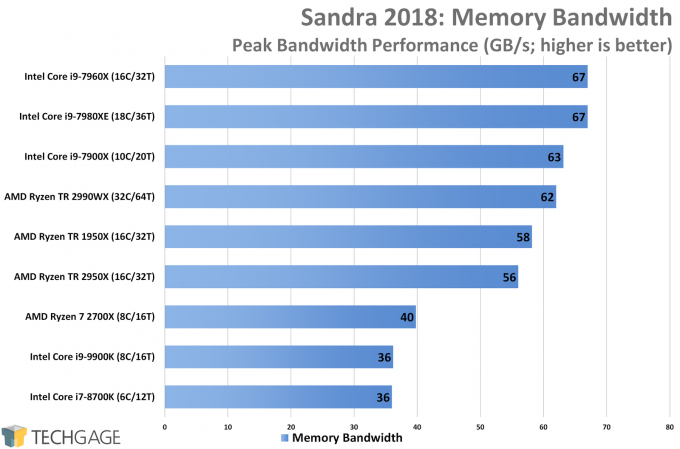 This memory bandwidth test isn’t what I’d call incredibly important (and we’re sure there are other sets of benchmarks that would paint a better picture), but from an overall synthetic standpoint, the 9900K and 8700K are effective equals. This is another test that has AMD in the lead of the two chips, which is interesting since AMD’s Threadrippers fall behind the competing Core X-series chips from Intel.

One thing’s very clear from these results though: a quad-channel memory controller makes a considerable difference, and it’s not hard to tell which is which in this chart (but as a hint, the top six are quad-channel).