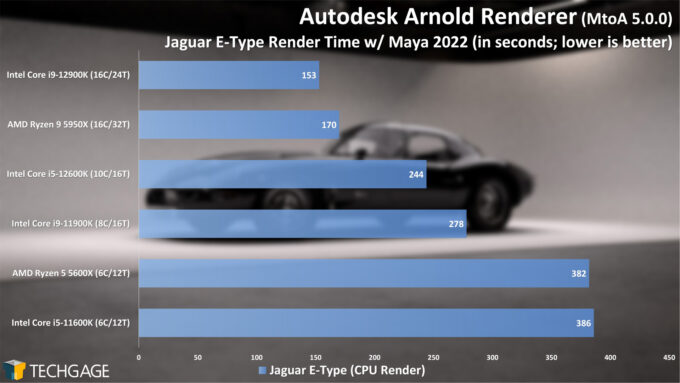 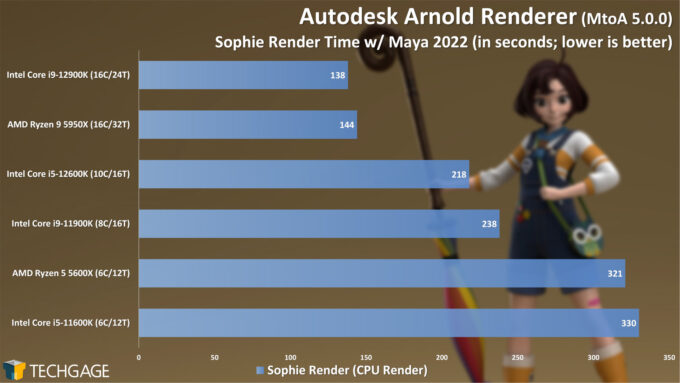 With its unique architectural design, we really weren’t sure what to expect out of Intel’s 12th-gen Alder Lake chips in workloads that scale extremely well with additional cores. Could we possibly see the 8P+8E design of the 12900K beat out a traditional 16-core like the 5950X? Well, we have our answer thanks to the results above: “yes”.

It really is impressive just how fast these 12th-gen chips are in all of the workloads we’ve tested so far. With the original Zen, AMD helped make CPU-bound rendering tests interesting again, and it only became more interesting as higher core count chips were released. Now, Intel helps make it interesting by pairing performance and energy cores together to beat out AMD’s same-count native cores.

Let’s see if this trend continues: 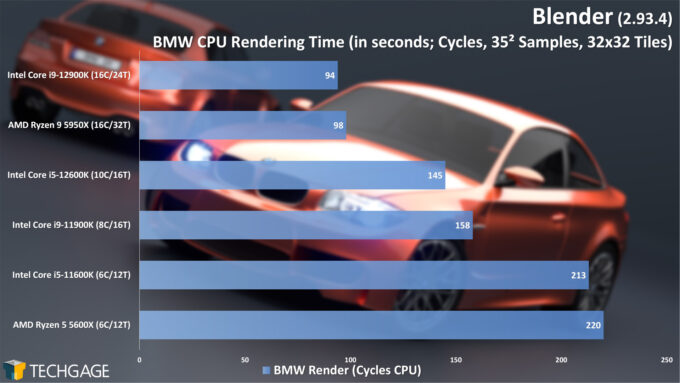 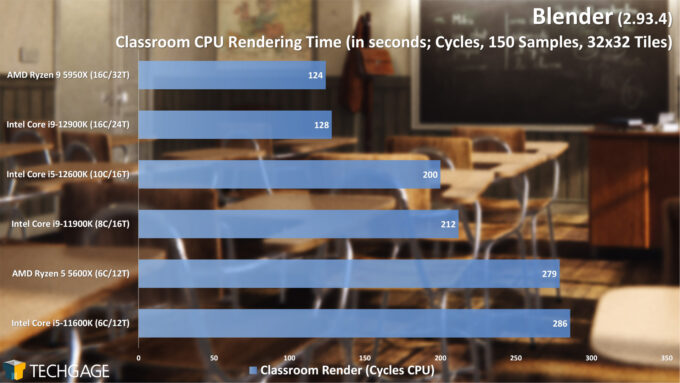 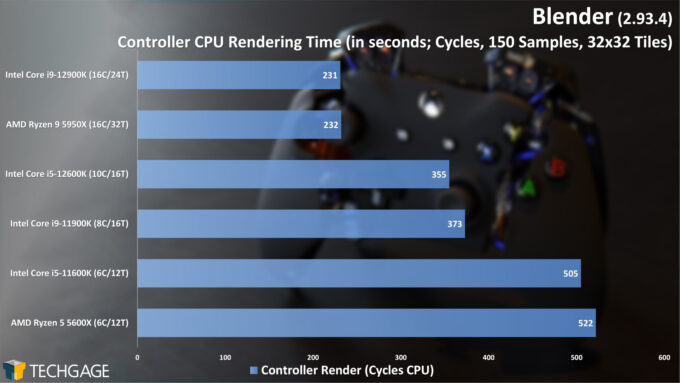 With Blender, we’re seeing similar performance out of these chips as we did with Arnold, with Intel’s i9-12900K edging out the 5950X ever-so-slightly in the majority of tests. Notably, AMD did manage to win the Classroom render test, so overall, both chips perform pretty similarly, we must say.

What could change once a GPU is introduced? 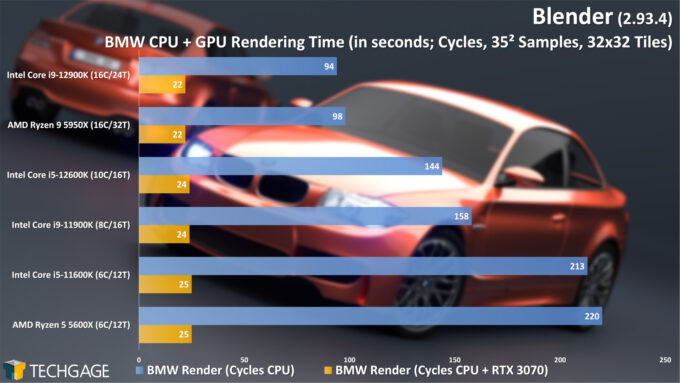 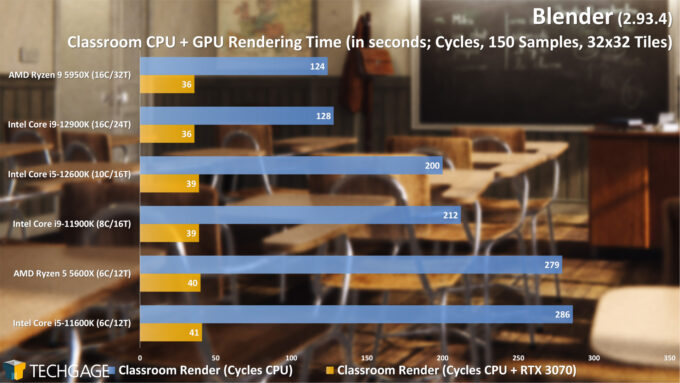 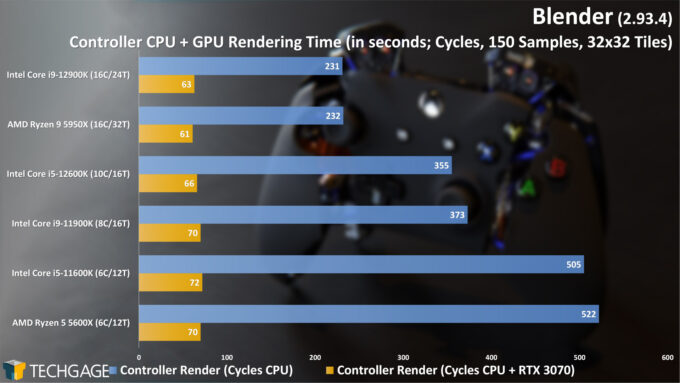 If you ever needed proof that a graphics card can dramatically improve render times, then the above results should prove sufficient. Once again, Intel’s 12900K takes the top spot in the same projects as we saw in our CPU-only testing, but really – most of the end result is being helped by the GPU more than it is the CPU.

One thing the above results leave out is what things would look like if we used NVIDIA’s OptiX API instead of CPU or CUDA. As we’ve seen in the past, there are indeed times when CPU+GPU can beat out OptiX with a fast GPU, but it’s likely going to require many cores. You can peruse this yourself in our Blender 2.93 performance deep-dive.

We’re currently in the middle of benchmarking for the upcoming Blender 3.0 launch, so we’ll find out soon enough if the new Cycles X render engine boosts CPU performance as it does GPU performance. 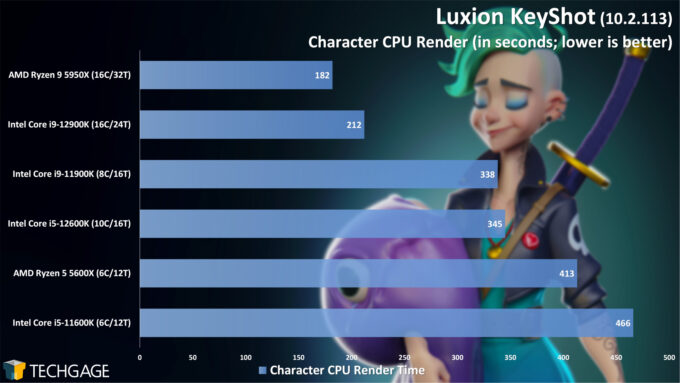 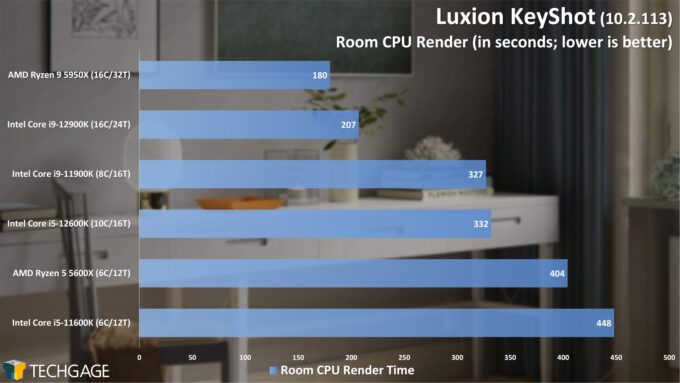 KeyShot becomes the first rendering result that safely gives AMD’s Ryzen 9 5950X the lead, and we’d suspect that will be the case with most KeyShot projects, since we’ve generally seen nearly identical scaling with any project we’ve tested with.

As with most of the results on this page so far, KeyShot does a good job highlighting the massive improvements Intel CPUs have seen going from 11th- to 12th-gen. 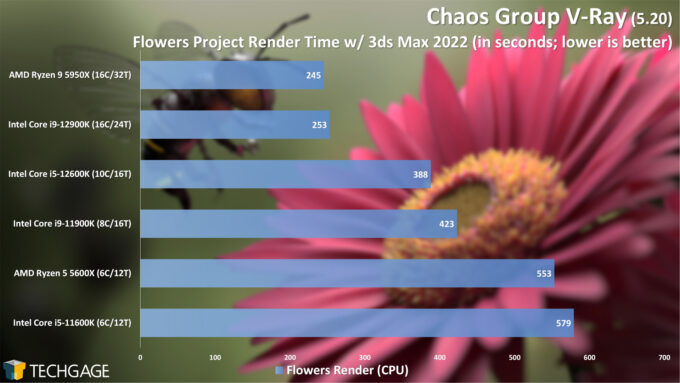 The above result looks similar to others we’ve seen on this page, but don’t worry, it’s about to get more interesting in a second. When identical core counts are involved, Intel has historically seemed to edge out AMD a bit in V-Ray, although in our CPU-only test here, the 5950X does manage to place ahead of the 12900K. But, with 16 high-performing cores, you’d expect that. What you might not expect is just how tight the delta is between that 16-core, and Intel’s 8P+8E design. Yet again, we can see enormous gains in performance from one generation of Intel CPU to the next.

Alright – let’s add a GPU to the mix: 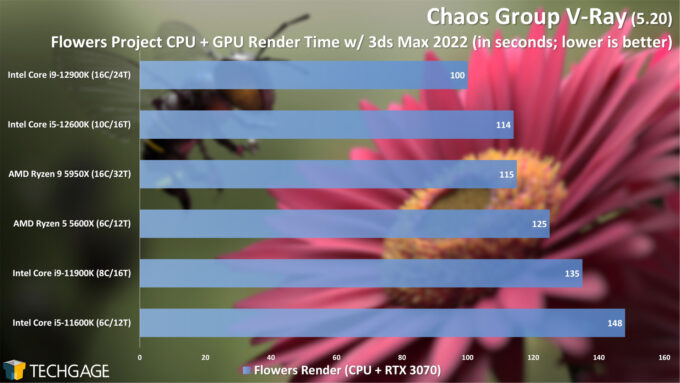 We’ve seen countless examples over the years of how important a GPU can be to rendering performance, and V-Ray yet again backs that up. What’s interesting, though, is that while the CPU only render put the 5950X in the lead, the heterogeneous render gives an edge to both of the 12th-gen CPUs tested.

So far, we’ve seen Intel’s new chips perform extremely competitively in rendering, with the 12900K performing better against the 5950X than we were expecting. Because we like to be thorough, we have four more rendering tests on the following page, so let’s see if Intel can continue its seriously strong showing.