As we first talked about earlier this year, the forthcoming Blender 3.0 is going to introduce a completely overhauled Cycles render engine – dubbed Cycles X. As Cycles is the de facto choice for most Blender users, any impact to performance is going to be noticed, and thankfully, what we’re seeing with Cycles X so far gives good reason to be excited.

The Blender Foundation itself has reason to be excited, and it is excited, proven by a new official blog post that highlights the improvements. With NVIDIA’s OptiX API engaged, these are the performance leaps Blender itself has seen:

Some of these render time improvements may seem a little too good to be true, but based on our own 3.0 testing so far, we have little doubt that you can expect to see the same in the real-world. That said, some of the projects listed, especially Barbershop, show grander gains than what we’ve seen in-house with our chosen projects, so we’re glad to know things can be even better than what we’ve seen.

We’ll of course be testing the entire current-gen GPU lineup for a dedicated content piece soon after Blender 3.0’s launch, but we didn’t want to wait for the final build before going hands-on. Here are some quick-and-dirty results with an NVIDIA GeForce RTX 3070:

What’s not obvious from these results is that since our last big Blender render bender, with 2.93, we had to increase the resolutions of our BMW and Classroom outputs to prolong the process enough to see better scaling. With our previous Classroom configuration, the RTX 3080 rendered the image via CUDA in 53 seconds, and 26 seconds with OptiX. With Blender 3.0, that OptiX result dropped to 12 seconds.

In some cases, Cycles in Blender 3.0 will render as fast with CUDA as 2.93 could render with OptiX. We’ve yet to test any CPU rendering, but we’re hopeful some improvements can be seen there, as well.

Note that while we’re not including Radeon performance in this post, we have in fact tested multiple cards, and all of them see a stark performance improvement with the new Cycles in the same way CUDA does. Currently, AMD’s hardware ray tracing is not enabled in Blender, so it may be some time before we see Radeon catch up to NVIDIA’s super-fast OptiX. For a quick look, the aforementioned Blender developer post has some AMD performance: 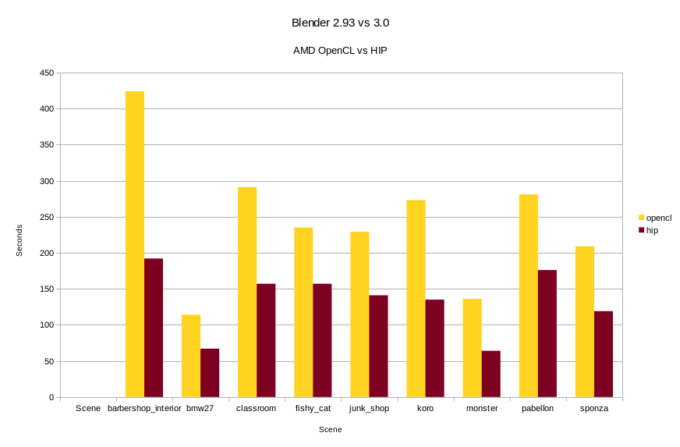 As we covered last week, AMD introduces HIP to Blender, its API that allows Radeon cards to work properly now that OpenCL is gone from Blender rendering. The currently available WHQL Radeon driver does not have this support built-in yet, so you will need to grab a beta driver.

Where performance has largely been unchanged is with the viewport, and EEVEE render engine. In quick testing of our 1-frame high-sample Mr. Elephant project, we actually saw a performance degradation, but when using EEVEE more realistically, such as with animation, 2.93 and the 3.0 beta seem identical – as does the aforementioned viewport.

In late 2022, it’s expected that Vulkan will grace both Blender’s viewport and the EEVEE render engine, so it may possibly take that long before we see significant performance differences in either.

We’re currently wrapping up updating some tests for the new Blender 3.0 release, and will be getting down to benchmarking business soon. Stay tuned, as there’s going to be a lot of cool data to pore over.