Since the release of Blender 2.80, development of the popular open-source design software has been supercharged. With that particular release, much of the industry seemed to finally catch on that Blender is a full-featured tool that is worth supporting, with the likes of AMD, NVIDIA, Epic, and others helping to accelerate development and get new features and polish pushed out the door quicker.

With the help of a couple new blog posts, the Blender Foundation goes over the many ways the software is going to be bolstered this year, and as you might suspect, there’s a lot to take in.

In Dalai Felinto’s Blender 2021 roadmap post, we learn that this year will introduce a long-anticipated asset browser, library overrides, Vulkan support, improvements to the character animation pipeline, and perhaps most intriguingly, we’ll also see the introduction of a USD importer (thanks in big part to the efforts of NVIDIA). Geometry nodes, which was introduced in 2.92, will see big updates this year, as well.

The next version of Blender is set to launch in late May, bearing the version number 2.93. Like the 2.83 release, 2.93 will be an LTS build, meaning it will be fully supported for two years, even after newer versions come out. Since 2.83’s release, we’ve seen it receive thirteen point releases that’s taken care of bugs, but brought no feature updates. Fortunately, the release of the USD importer is near, but it’s not likely to be finished until after the 2.93 release.

After 2.93, the next major Blender release will be 3.0, and as has become the norm, it will include a huge number of updates over 2.93. A major focus of 3.0 will be a UI refresh, something significant enough to warrant a UI/UX workshop to take place in Amsterdam this summer. 3.0 is expected to be released in late August or September. 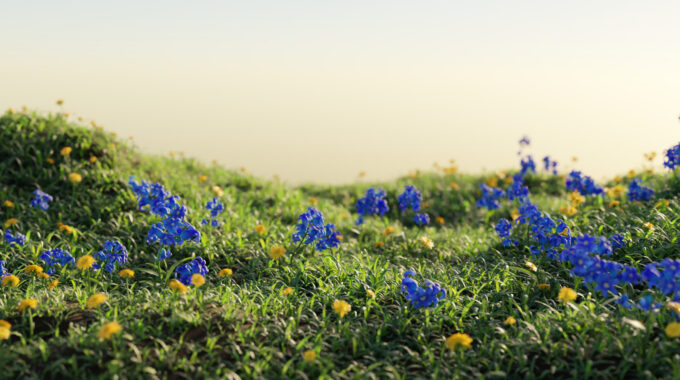 Scene created with the help of Blender’s geometry nodes feature

This past Friday (April 23) marked the tenth anniversary of the Cycles renderer announcement. Cycles has seen an incredible amount of change over the years, with new capabilities added with each release, and performance getting better all of the time. In another blog post, Brecht talks of Cycles X, a project that reevaluates Cycles’ architecture to see how it could be improved.

There are a few areas of focus with this Cycles reimagining, including an improved architecture that will better cater to the next ten years, improved viewport and batch render scheduling, more rendering algorithms, and naturally, better performance. While Cycles launched with GPU support from the get-go, technologies have changed greatly since then, and decisions of the past are holding back performance today.

There’s already been progress made to Cycles X, with the current prototype able to render select benchmarking scenes. While it’s early days, and the project itself seems lofty, it’s expected that this overhauled Cycles will appear in a stable release in six months or so. 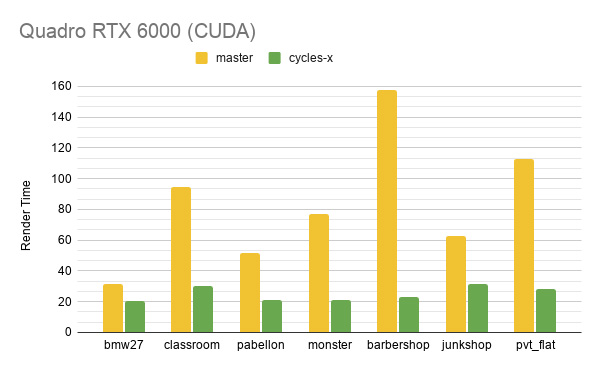 As you can see from the graph above, this “improved performance” promise seems to equate to enormous render time drops in pretty much every case. The least improved render time was with the BMW project, but that happens to be the simplest of the bunch. The much more complex Barbershop scene drops from about 159 seconds down to 21. That’s really quite unbelievable. Other graphs shown highlight that similar gains will be seen with OptiX rendering.

CUDA and OptiX is the focus of these tests, but part of the reason to overhaul Cycles is to better support all GPU hardware. That said, OpenCL support is getting the boot, so in its current state, Cycles X wouldn’t support AMD or Intel GPUs, but as highlighted earlier, Vulkan support is being worked on, so it seems likely we’ll end up seeing it added in Cycles to support these other GPU architectures. It’s noted that both AMD and Intel are working with Blender developers on these new kernels.

As you can clearly see by now, there’s a lot of good stuff coming to Blender this year. The continued momentum is really great to see.