Intel’s 45nm Dual-Cores have finally arrived, so it’s only fitting that we take one for a spin. Our test subject is the 3.0GHz E8400, offering 6MB cache, SSE4 and more. Overclocking is impressive, with 3.8GHz stable being possible without even raising the voltage! This chip definitely proves itself a winner.

In the summer of 2006, Intel released their 65nm Conroe-based processors, and to say they won the hearts of many would be an understatement. It was one product-launch that Intel didn’t want to hit lightly, especially since AMD were actively taking from their customer base – on the enthusiast side, most notably. When said and done, Intel did accomplish what they planned to do. They put the industry through a blender and showed us how to be excited about processors again.

Although frequencies with Conroe were not as high as what we were used to seeing from Intel, the folks in Santa Clara proved that a high frequency didn’t mean much if the processor itself was inefficient. Indeed, a 2.4GHz Conroe Dual-Core proved just how much better an efficient processor could be, and it quickly became the most common processor choice for the enthusiast.

The following summer, follow-up processors were released, including the E6750 Dual-Core which we evaluated at the time. Besides speed bumps, those processors didn’t bring much to the table in way of new features, except for native 1333FSB support. Instead, the processor we are taking a look at today is one of the few new models that effectively replace the Conroe-based chips that we came to love so dearly in summer of ’06.

I won’t delve deep into how 45nm improves on 65nm, as I explained all of that in our QX9650 review, but I will touch on things briefly. One large benefit that comes with all die shrinks is better power efficiency and lower temperatures. Chips have the capability to run just as fast, if not faster, than their predecessors, all while running cooler and drawing less power. It’s a win/win situation.

But with 45nm, Intel introduced more than just a die shrink. The biggest feature that most people will be interested in is the SSE4 instruction set. It affects media-buffs only – those who encode videos – but the performance gains are so evident, that developers of such applications are bound to begin supporting it sooner than later. The speed increases could be as large as 2x, even though it’s difficult to believe.

Other improvements include increased L2 cache, half-multipliers (eg, 9.5x), a faster front-side-bus, improved Super Shuffle Engine, Smart Cache (to improve how split loads are accessed and stored) and so many transistors on a single die, it can give people headaches to think about it! 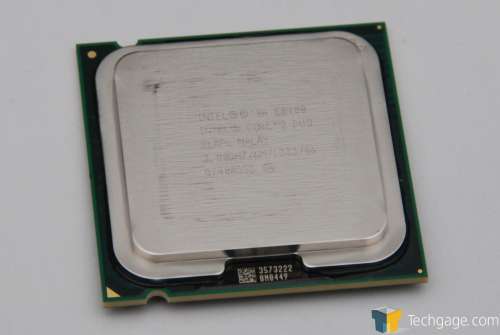 The obvious downside of the QX9650 launch in November was the fact that no other processors complimented it. Therefore, it was QX9650 or bust – until now that is. During CES earlier this month, Intel officially announced their 45nm launch plans, which include the desktop side, server and also mobile. We found out at that time that the Quad-Core models (Q9300 – Q9550) were pushed back to sometime in Q1. Although a solid date was never settled on, original road maps showed January as the scheduled launch. However, the rumor is that due to poor performing Phenom Quad-Core sales, Intel decided to hold off on the launch to help push remaining 65nm models to consumers first.

So how does the road map stand now that some time has past? Although Intel announced near-immediate availability of all 45nm desktop Dual-Cores at CES, only the E8400 has shown up on e-tailers. One popular e-tailer has the other models listed for availability in April. How true that is, I’m unsure, but it’s strange given the fact that they were supposed to be available by now.

The biggest downside to the road map is that the Q9xxx are not available. Once they are, they are no doubt going to sell like hotcakes, given the improvements over the previous generation and the fact that the prices do not increase. The upside, though, is that even though the E8400 is the lone desktop Dual-Core to be available right now, we can be happy that it is the model most people would be after.

What makes the E8400 such a great choice is the fact that it’s affordable, at $220USD on average, and has a nice clock speed. Let’s face it… where overclocking is not concerned, having a 3.0GHz CPU looks better to the ego than say, 2.66GHz. It’s all about the smooth frequencies, baby.