When Logitech announced its G710+ gaming keyboard last week, there were a couple of good reasons to take notice. On one hand, gaming releases from Logitech don’t come as often as they used to. On the other… one word: “mechanical”.

Let that sink in for a moment. Logitech, amid all of its competitors that have been offering mechanical options for some time, has finally decided to release its own. On launch day, I swear I could have heard Logitech’s massive fanbase collectively say, “It’s about time!”

But – while Logitech does tend to produce some of the highest-quality peripherals out there (based on personal experience), its competitors cannot be immediately discredited. Cooler Master, Corsair, Rosewill, Razer and of course, Das, have been building mechanical models for a while, and their experience is clear. In fact, we’ve taken a look at quite a number of mechanical keyboards in just the past year, and while some were better than others, it’s unlikely anyone would be truly unhappy with any of them.

That raises a big question. What has Logitech done with its G710+ to sway those who’ve been considering competitor models, or may already own them, to move on over? That question becomes even more important when you realize that the G710+ retails for about $150 – quite a jump compared to most of the competition. 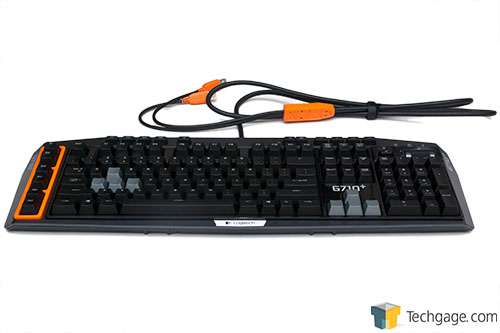 We’ll be covering all of the board’s features over the course of the review, but as a quick synopsis, the board’s biggest features are: adjustable backlighting affects 100% of the keys, 6x “G” macro keys + 3 banks, the ability to record macros on-the-fly, sound-dampened keys, 26-key rollover support, anti-ghosting keys and dedicated media keys (including a volume roller). That just kicks things off; we’ll talk more about these and the other hardware features of the G710+ with a tour on this and the next page.

But first, it’d be wise to cover what a mechanical keyboard actually is. The reason for the hype surrounding mechanical models boils down to “tactile feedback”. The design of the switches used in mechanical keyboards tends to make typing a more natural-feeling experience. Some have even claimed that they’ve found it to be less stressful on their wrists, and that the number of typos can even be lessened. I personally haven’t found either of those to be the case for me, but I can certainly side with improved tactile feedback. The first time I laid my hands on a mechanical offering – Cooler Master’s QuickFire Pro – I was sold, mimicking the experiences of everyone I’ve known who are now devout mechanical users. 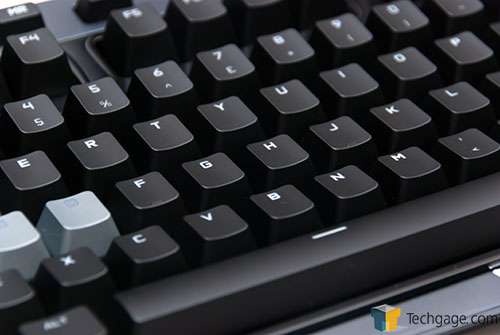 Not all mechanical keyboards are built alike, however. The most common switches produced today are by CHERRY, a company that produces five different “MX” switches that it separates by color – a seriously helpful move by the company. Logitech has opted for Brown switches here, which offer a very light “bump” when a key is pressed down about half way. By comparison, Black switches have no bump at all, but require a bit more pressure to bottom-out, while Reds share the no-bump nature but are very easy to push (almost too easy, by some standards). Two switches I haven’t seen used to much are Blue and Clear; Blue offers a clicky bump that some might prefer, while Clear is much like Brown with its bump but requires just a bit more force to press down.

The “best” switch doesn’t exist, as it all comes down to personal taste. I’d have to imagine that Brown comes about as close to “one-size-fits-all” as they come, however, which is why Logitech has chosen to offer it exclusively here (though a Red option sure would have been nice). I have personally come to like the small bump that the Brown switches offer, and in general, I don’t find the keys too hard or too light to press – it’s just about perfect. You can see the Brown switches hiding underneath some of the keys in the photo below. The clear orbs seen above each are the white LEDs used for the backlighting. 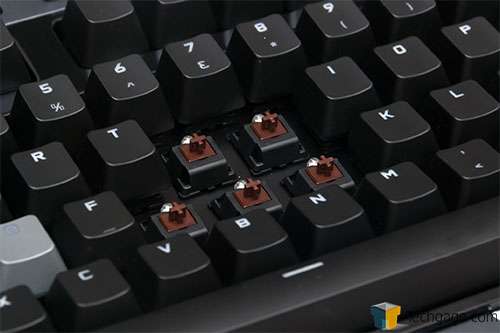 The neat thing about CHERRY switches is that removing and reapplying a key is made easy due to their design. On this particular keyboard, I actually had to wonder if the key was properly installed after taking the above shot, because there was simply no confirmation click typical of a regular keyboard. This is further helped by the fact that Logitech has employed a sound dampener inside each key. 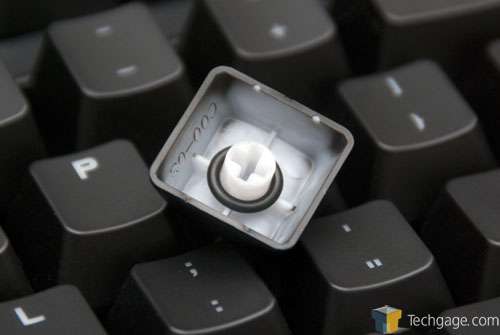 Adding a simple ring to each key might seem simple enough, but it’s effect on the keyboard noise level is hard to miss. I’ve been using keyboards equipped with Brown switches for at least the past six months, and the noise difference of the G710+ versus the others is significant. Even recently – while the Brown switches on the other keyboards are not what I’d consider to be truly loud, they are quite loud in the dead of night.

By comparison, this Logitech keyboard comes as close to a regular keyboard noise-level as I’ve seen, though nothing can compare to the noise level from say, a chiclet style keyboard like that found on Logitech’s K360 or those found on most notebooks.

What to take away from the G710+ so far: it offers good feedback, a slight bump, and is the quietest mechanical keyboard we’ve tested to date.

There is an exception, however. Despite there being three circle “sockets” inside of the spacebar, only one of them has a dampener. As you can probably imagine, this does affect noise level. Because of this, that particular key stands out in comparison to the rest, causing me to question the reasoning for it. Other large keys, such as the + and Enter in the numpad area also have only one dampener, but there, I could understand it better – those are not used nearly as much as the spacebar.

To see if a difference could even be made, I borrowed the dampeners from a couple of keys I rarely use and put them on the empty sockets in the spacebar. Sure enough, quite a noticeable difference could be heard – so much so, that I left it that way. I didn’t feel any difference in tactile feedback, so overall, it’s a simple mod I’d recommend to anyone who picks the G710+ up.