by Rob Williams on June 26, 2020 in Graphics & Displays, Processors, Systems

The gaming notebook market has been infused with high-refresh display panels over the last couple of years, and with its latest 10th-gen processors, Intel has been eager to see more flood the market. In this article, we’re going to explore 300Hz gaming on Acer’s new Predator Triton 500 notebook.

One of the first things we’re compelled to do as soon as we hook up a new high-refresh monitor is to double-check its configuration in the NVIDIA Control Panel, and then hit up UFO Test to make sure we’re getting the correct speed. As expected, seeing 300Hz was no problem on this notebook.

If you’ve ever looked at marketing trying to sell high-refresh monitors, you’ve no doubt seen just how hard it is to portray the difference. Even Acer’s own marketing shows 300Hz as a crisp image, and 60Hz as a blur – which of course will confuse everyone who runs a 60Hz monitor and doesn’t see a constant blur over everything. 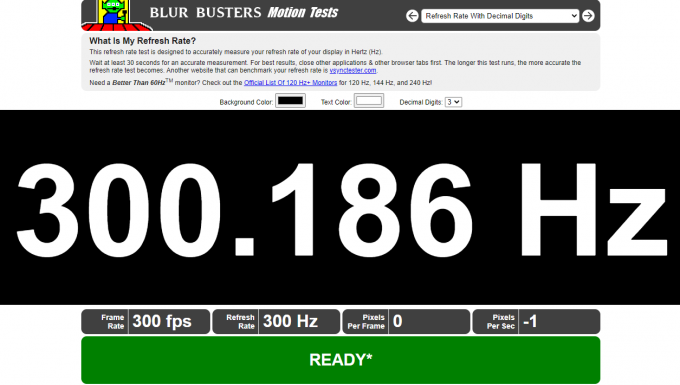 It was at CES that we learned of the game panning test that’s also made by Blur Busters. This one is even more useful than the UFO demo in some ways, because it makes it really easy to understand that the faster the monitor, the smoother the image. 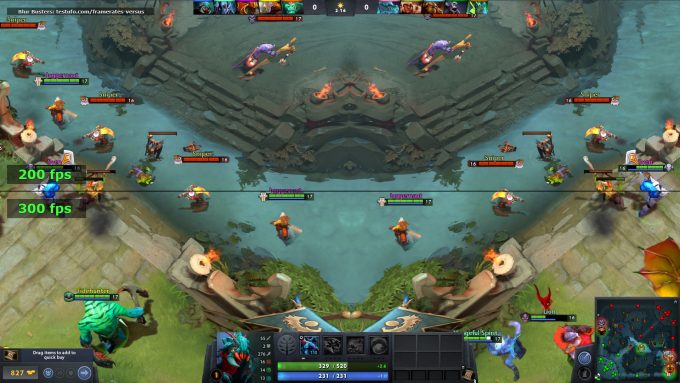 If you have a monitor as fast as 300Hz, reading the names of characters or monsters as they are scrolling by is doable, but it’s impossible on anything much less. When we tested 200Hz vs 300Hz, we could still easily tell the difference in smoothness. Obviously, as mentioned before, this is pretty much impossible to prove through a still image. If you have a monitor better than 60Hz right now, you can do the same test and see an even more noticeable difference (300Hz from 200Hz is less stark than 120Hz from 60Hz).

While we did plenty of real-world and creator benchmarking on this notebook to make sure it performed as we’d expect, the entire reason we received this model was to test out its gaming capabilities, so that’s where our main focus is in this article. We’ve taken a look at many systems before, but this Triton 500 is a little more focused, because our goal in gaming was to try to get as close to 300 FPS as possible. As it happens, that is seriously tough.

Whether or not a game can reach 300Hz at all depends on its design, and whether or not a processor is going to be able to get its work done quick enough. We’ve seen from our regular CPU benchmarking that hitting 300 FPS even in a game like Counter-Strike: Global Offensive is challenging, or impossible in our case, even with a 9900KS and 2080 Ti. How exactly some people are getting even higher, we’re not sure, but we definitely remember seeing CS: GO at 360Hz at CES, so it could largely depend on the level chosen. 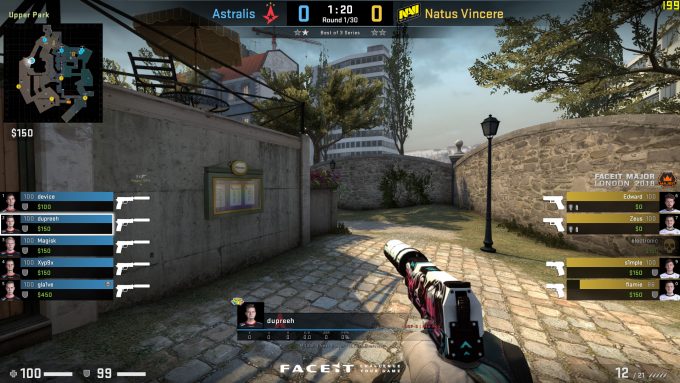 In our usual CS: GO timedemo, we couldn’t easily hit 200 FPS on this configuration, even with the graphics turned all the way down. We dropped the resolution to 720p to see if that would improve anything, and it didn’t, leading us to believe that the CPU is the bottleneck – despite the fact that it peaks at 5GHz. 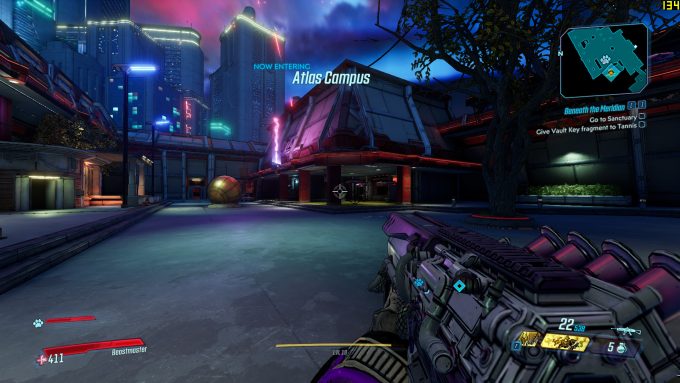 We knew from the get-go that Borderlands 3 would put up a fight, and we were not wrong. Even at minimal detail levels, our average frame rate would hover around 120~140, but peak at around 180 FPS, depending on where the player was facing. We’d wager most often, you’ll see around 100 FPS in action, but that’s a little more acceptable for this game than an esports title.

One thing we will say is, with all of these games we’ve tested, “low” detail isn’t actually as low as we’d think. Moving from top to bottom in Siege improves performance more than it decreases graphics quality. The same is true for Borderlands 3. 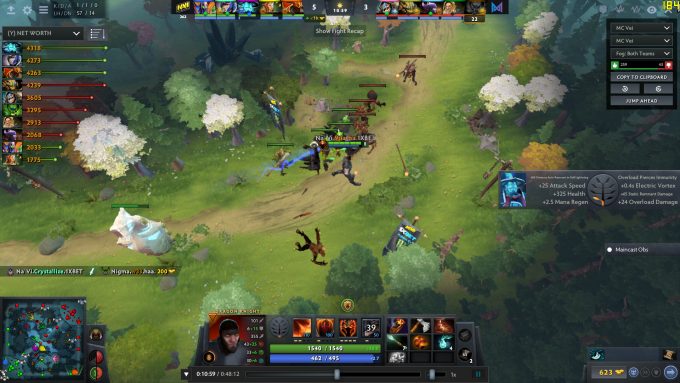 Even with Dota 2, we weren’t able to hit 300 FPS, but instead hovered around ~170 FPS. The more we tested out these games, the more it became obvious that just because this notebook has a 300Hz screen, there will be very few games that can take advantage of it. But again, it’s not as though 150 FPS is a problem – that’s still a major increase to smoothness vs. 100Hz or 60Hz.

We just had to load up a game we knew would hit 300 FPS without any fuss: Duke Nukem 3D. 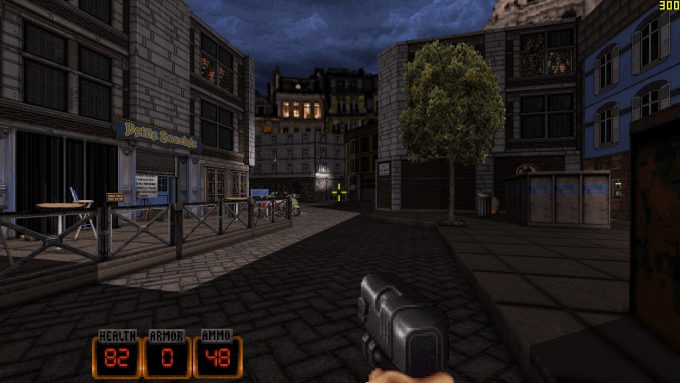 Sure enough, in this game where frame rate doesn’t help you out at all, it runs at a silky-smooth 300 FPS. Despite it seeming ridiculous to care about such high frame rates in older titles, there’s still no denying just how smooth the movement is. 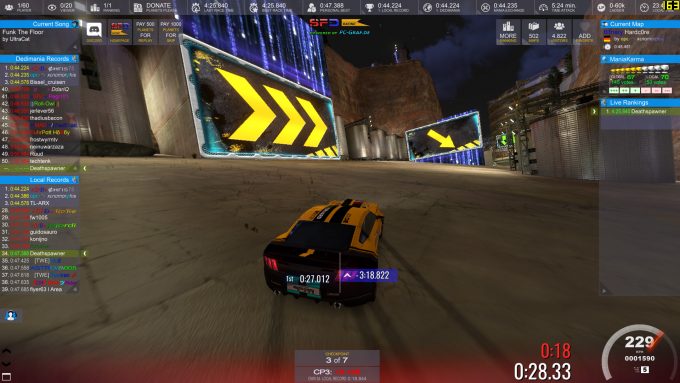 When it comes to supreme smoothness, there are few games I want to see run better than Trackmania 2. Luckily, the game doesn’t require a ton of horsepower to deliver big frame rates, although in the case of this gaming notebook, we still couldn’t hit anything better than 200 FPS. With a new Trackmania to be released in the week ahead, we’re curious to see if it will be optimized differently to enable 300 FPS frame rates easier. 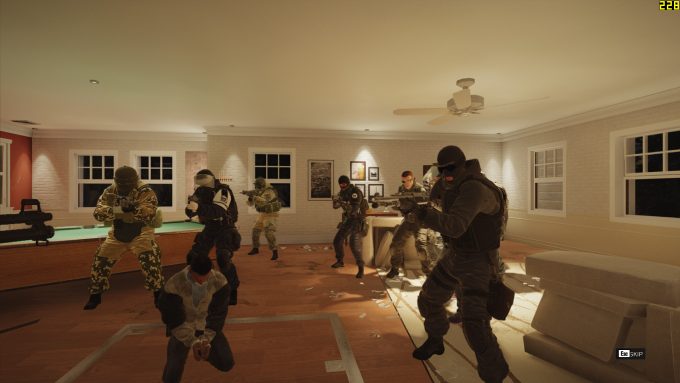 Of all of the games we tested on this notebook, we knew Rainbow Six Siege would give us the best chance of seeing high frame rates – and that turned out to be true. In the scene above, the busiest part of the game’s benchmark is seen, and at that point, we’re seeing comfortably over 200 FPS. Some portions of this scene take place outdoors, where there’s not too much going on, and there, we see 300 FPS.

As mentioned in our hardware tour of this Triton 500, Acer includes a Turbo button conveniently placed above the keyboard to give the GPU an immediate boost. We conducted some official benchmarking in the same manner that we do our CPU game testing, with and without the Turbo. Here are those results:

All-around, these results are quite impressive when you compare them to our usual testing. If you look at those CPU graphs, these notebook results would slide into the last or second-last position, which is still amazing for a gaming notebook, especially when you consider those desktop results are done with a full-blown desktop RTX 2080 Ti. This notebook’s six-core processor and 2080 SUPER Max-Q delivers about the same CS: GO performance as a desktop i7-8700K and 2080 Ti. Not bad at all.

The non-Turbo and Turbo results reflect the same detail settings used in our normal CPU content, but we also wanted to decrease the detail to low values in order to see what might be ultimately possible. When doing that, we actually managed to average just above 300 FPS in Siege.

Our sample of this Acer Predator Triton 500 arrived at a pretty good time, as we’ve been thinking quite a bit about those 360Hz monitors NVIDIA showed off at CES, as well as a slew of notebooks that had sky-high refresh rates. We’re not quite sure if we remember seeing 300Hz notebooks there, but at the same time, we’re still trying to remember that yes, this is something that actually exists.

From a hardware perspective, this particular Triton 500 has some serious brawn. The CPU has six cores, so it may not be ideal to use as a workstation for people who demand as much CPU performance as possible, but with so many workloads being GPU-focused nowadays, it might actually not be a major issue. The fact that this chip peaks at such a high clock speed will help negate the loss of extra cores a bit (which, for gaming, are not going to be put to good use too often.) 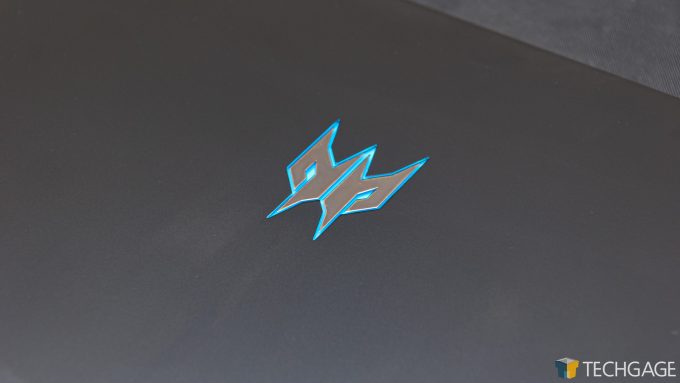 We don’t really have any major complaints about the notebook itself. It looks great, and is probably one of the best-looking gaming notebooks we’ve seen. It’s clearly a gaming notebook when you look at it, but it’s not overly done with lights or fancy decals. The entire look is really clean, and dare we say tasteful.

From a performance perspective, we’d be crazy to have a complaint. The CPU is super-fast in this notebook, as is the graphics card. If you plug this notebook into an external monitor, you could power many games at 1440p without issue, at least if 60 FPS is the target.

While we didn’t touch much on the content creator side of things here too much, the fast CPU single-thread performance seen in this notebook would help deliver better design experience, such as with project loading and viewport manipulation. For rendering, some solutions will be dramatically sped-up thanks to the GPU’s ray tracing cores, and likewise, encoding will be smooth because NVIDIA’s encoder is well-optimized (especially in recent versions of Premiere Pro).

At $2,799, this notebook isn’t inexpensive, but it’s also no slouch. It has one of the fastest mobile CPUs going, and the de facto fastest Max-Q NVIDIA currently has on offer. Thankfully, it also has 32GB of memory, as that price-point would have seemed rough if only 16GB were installed. 32GB adds to the fact that this notebook would be just as good for creative work as it is for gaming for many people.

Ultimately, this is one of the finest gaming notebooks we’ve used, and it’s not only because it packs the fastest display panel we’ve ever had the joy of using in a notebook. The Triton 500, as equipped, isn’t cheap, but for its form-factor, the performance is top-rate.