It’s been quite some time since we last checked out one of NETGEAR’s NAS offerings, so we’re going to use the ReadyNAS 102, a dual-bay offering, to help us get up to speed. Unlike the last ReadyNAS we looked at, the 102 features OS 6, and one of our favorite, understated features: Btrfs support.

We have taken quite a few looks at various NAS devices over the nine years Techgage has been online.  Most recently, it’s been the QNAP TS-269L and the WD My Cloud EX4.  Both products are marketed at similar demographics and as such, they both fill existing needs for the home and small business consumers.  In Rob’s recent look at the QNAP, he focused a considerable amount of time on its interface, comparing it to the superb job Synology has done with its user experience over the past few years.

Like QNAP, another company we haven’t looked at recently is NETGEAR.  While the stretch between reviews of NETGEAR’s NAS devices hasn’t been near as long as the six years it took to circle back around to QNAP, our last look at a NETGEAR device was the ReadyNAS Duo v2 back in December of 2012.  It’s with great excitement that we once again have one of the company’s ReadyNAS devices on our bench, and in an attempt to not only stay alongside its competition, NETGEAR hopes to move ahead with some cool new features of its own.

Today we are working with the NETGEAR ReadyNAS RN102.  In our initial talks with a few members of the NAS team at NETGEAR, it was made clear that a significant focus went not into design and hardware engineering, but into the code that users like you and I interact with on a regular basis.  With added features like anti-virus and snapshotting, NETGEAR has not only added many additional useful features to its firmware, it’s also made a significant effort to position its interface to be included in the same conversation as other UI titans like the previously mentioned QNAP and Synology. 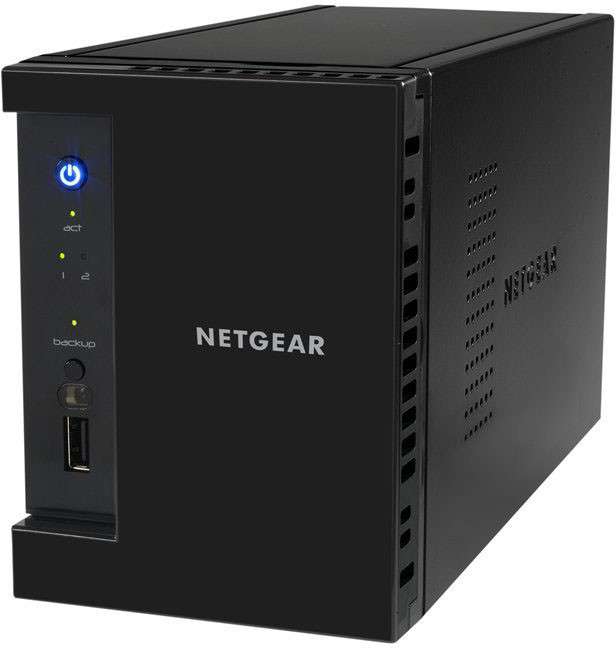 A NAS that draws its aesthetic inspiration from previous two bay NETGEAR NAS devices, the RN102 resembles the Duo v2 we looked at in late 2012.  Within the recessed front IO panel, we find the device’s power button, activity and disk LEDs, and an LED for USB backup activity initiated by the “backup” button, and a USB 2.0 port situated just below it.  Hinged at the left, the front panel swings outward to allow access to the two drives held in place by lockable carriers.  These carriers are extremely sturdy and fit into the NAS far nicer than those we worked with in the Duo v2.  To extract the carriers to either install a drive or remove one, the user simply needs to press down on the hollow area at the bottom. This unlocks the carrier’s handle and allows the entire assembly to be pulled outward. The back of the RN102 looks almost identical to the Duo v2, with the only significant difference being the addition of an eSATA port.  This joins a pair of USB 3.0 ports (Fresco Logic FL1009 dual port PCI-E controller), a Kensington locking hole, a Gigabit NIC (Marvell 88E1318-NNB2), and a power port.  The dominant feature found on the back of the NAS is the large 92mm fan that remained whisper quiet throughout all operational testing. 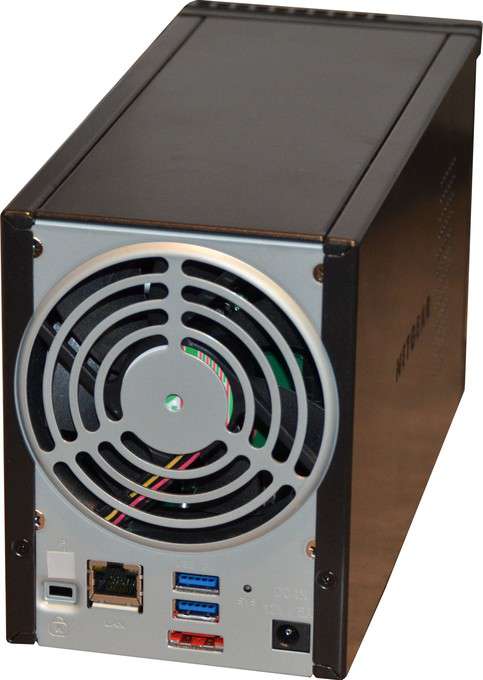 As I have done with my more recent NAS reviews, I have included an SSH session window to highlight the CPU information.  As we see, the CPU is a Marvel Armada-370 SoC and is clocked at 1.2 GHz.  Not shown is the soldered-on 512MB of system memory that the RN102 comes with.

On to a look at NETGEAR’s ReadyNAS OS 6 software.