ROCCAT Isku FX – The FX Stands for ‘Features in eXcess’

At the time of writing, the Isku FX is ROCCAT’s range-topping keyboard. Appropriately it’s packed to the gills with features and capabilities lesser keyboards tend to eschew. No, it’s not a mechanical keyboard, but despite this is it still worth your hard-earned dollars? Read on and find out!

Before anything else, I think it is essential to assert that the Isku FX is a keyboard first, a gaming peripheral second. I suppose there are people who build PCs solely for gaming, but I would suspect that the majority of people don’t fit that description. Consequently, this review will be from the perspective of a general-use end user who also happens to play his share of PC games.

As a matter of course, I tested this keyboard on the basis of several related key criteria: Subjective feel during usage; ergonomics; typing performance; gaming performance; and, finally, miscellaneous.

In terms of subjective feel, the first thing I noticed about this keyboard is its lightness. In fact, it’s appreciably the lightest keyboard I’ve ever tested for Techgage. This gives off the initial impression that it’s not a robust product. The chassis exhibits a minimal but noticeable degree of flex as well, especially towards the top end (i.e., further away from the wrist rest) when you apply some torque to it. The very best keyboards in my collection exhibit zero chassis flex, so I tend to think of this as a reflection of the product’s build quality. That’s not to say the Isku FX is built poorly; actually, despite its lack of mass and noticeable chassis flex, it feels well-built. It just doesn’t feel rugged, in the way that the CM Storm QuickFire TK does, much less that tank-like beast of a keyboard, the GIGABYTE’s Aivia Osmium.

Moving on to the keys, this is obviously not a mechanical keyboard. Key travel is shallow, although it’s not nearly as shallow as that of a typical laptop chiclet keyboard (or a Mac keyboard, for that matter), and actuation pressure is very low. Consequently, it’s very easy to bottom out on your key presses. In my experience, bottoming out constantly leads to increased finger fatigue and strain especially during extended writing sessions. I’m not pleased, either, with the slippery, almost slick, feeling of the keycaps. The ultra-smooth surface of the keycaps tends to dull any sort of tactile sensation of the keys on my fingertips. Your natural reaction, therefore, is to tend to press even harder. Not only that, but that feeling of slipping off the keyboard is very odd. It’s weird to feel the need to concentrate harder just to stay in the correct position for touch-typing.

Ergonomically, it’s pretty solid. Other than the aforementioned gripes with the slippery keycaps, I can’t complain. I particularly like this keyboard’s integrated wrist rest. Typically I have my hands lifted off the desk completely as I touch-type: I don’t have a wrist rest on my daily driver keyboard. The Isku FX’s wrist rest is at the ideal height for the heel of my hands to rest on them, and its textured surface is grippy enough to somewhat counteract the keycaps’ total lack of texture. For someone like me who doesn’t need a wrist rest, this might be a moot point; however, others who do rely on their wrist rests will appreciate the one on the Isku FX, especially given its slick-to-the-touch keycaps.

Continuing with ergonomics, I found that the layout of the keyboard is good enough, given its plethora of specialized keys. The Macro keys require a small stretch with your left pinky, and the Thumbster keys are in an ideal location. The Thumbster keys are also placed in a special recessed section so that accidental key presses are virtually eliminated. The Media keys, though, are too remote to be accessed without your fingers leaving home row; you would have to lift your hand completely from at least half of home row to use the Media keys at the keyboard’s top center section. This, though, is no surprise and is not a complaint. At any rate, how often do you really lift your hands from home row whilst in the midst of a hot and heavy writing session to adjust the volume control on your media player software?

Given the generally sound ergonomics of this keyboard, I was expecting it to allow me to maintain my typical performance and speed in touch-typing. On my daily driver keyboard endowed with Cherry MX Blue switches, I can go as fast as 93WPM with 0 errors (I’ve improved from my previous typical best of 89WPM/0 errors from previous keyboard reviews). On the Isku FX, though, my speed and accuracy both plummeted somewhat dramatically: 81WPM/0 errors is as good as I could do sans errors, while 87WPM/5 errors is my typical peak speed (averaged from my three best runs). Five errors is too many, frankly, and I figured out that my decreased speed and accuracy have everything to do with the keycaps being so slippery. It’s simply difficult, if not impossible, for me to feel 100% assured that my fingers are in the correct position over home row. This is a unique phenomenon amongst all the keyboards I’ve ever used. I can’t (and won’t) say definitively that this is something all typists will experience; I’m only speaking just of my findings, so your mileage may very well vary.

Using the Isku FX in games, though, transforms it into what ROCCAT probably intended it to be: This is a gaming keyboard. I generally disapprove of hardware manufacturers’ practice of branding certain products as “gamer gear,” but in this keyboard’s case specifically, I understand the rationale completely. The soft, shallow key travel is not a handicap at all in-game as it could be in day-to-day typing. Limiting the usable area (just the left hand, really) seems to have also reduced the chances of incorrect key presses. Not only that, but the fact that the software allows you to customize the functionality of the keys and create macro commands so conveniently constitutes what could be an unfair advantage. Just think about it: Where with some keyboards a certain in-game action might require a sequence of key presses, with an Isku FX under your fingers you can do it with the press of maybe just one (or maybe two keys simultaneously, with the Easy-Shift[+] key combination configured as such). Hardcore MMO players, in particular, would absolutely love this keyboard, I’d imagine.

And that’s reckoning without ROCCAT Talk. With this, you can perform macros and special in-game actions using a key to activate a mouse-specific function. I tested one such combo, Easy-Aim, on a range of first-person shooters. On sniping missions, you can enable Easy-Aim by using a designated key: The Kone XTD’s DPI downshifted to a pre-programmed setting, making headshots almost too easy. No more futzing about with your mouse’s DPI selection buttons. This is a case of a two-handed operation being superior to a one-handed one.

ROCCAT Talk also unlocks special visual effects with your Isku FX and its compatible partner mouse. In effect, the backlighting on the keyboard and on the mouse can provide dramatic visual feedback to certain in-game events. Personally, I think this particular feature is overkill and is somewhat gimmicky, but hey, I’m sure some users would think that this is nothing short of awesome. At any rate, it’s completely the end user’s choice whether or not to enable functionality of this type. 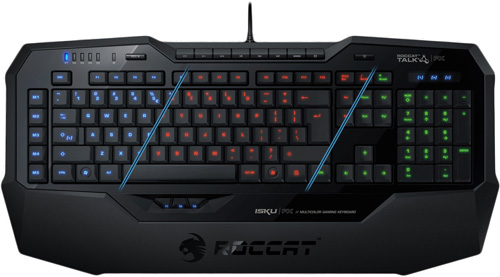 So what do we make of ROCCAT’s Isku FX? To me, it’s got a bit of a dual personality. Dr. Jekyll, its better half, shows itself during gaming. The things I had issues with – the slippery keys, the short and mushy key travel, even its chassis flex – become irrelevant. Instead, its attributes, tied tightly to the software package it comes with, come to the fore. The fact that you can configure the Isku FX’s keys to such a large number of customized functions is simply mind-blowing. In fact, for a user like me who doesn’t really need to customize a keyboard that much (I don’t typically use macros), the number of options available to you is almost insanity-inducing. But an MMO player, or anyone else who relies on macro commands, will truly appreciate all that the Isku FX can do.

Unfortunately, there is an ugly Mr. Hyde to contend with as well. Looking at the Isku FX as just a “normal” (i.e., non-gaming) keyboard, there are some shortcomings. Chief of these are the slippery keycaps. These really hurt my performance as a touch-typist. The short, mushy travel of the keys are also a potential issue. No one wants their fingers to feel tired and strained even after typing for hours on end. With a well-designed keyboard, I can literally just bang away on the keys, writing either my next Techgage review or a complete chapter overhaul on my fan-fiction novella. The Isku FX potentially can cause you the inconvenience of stopping to rest your aching digits.

As much as the Isku FX and ROCCAT’s special software sauce impressed me in gaming scenarios, it’s very difficult to give it my full approval. At the end of the day, a keyboard is one of the most important links between an end user and his PC; keyboards, to me, are mostly about the quality of the keys in all relevant facets(layout, key switch type, keycaps, key travel, etc.). Everything else – specialized software, media control functionality, etc. – is superfluous. The Isku FX overwhelms you with its capacity for customization and its ROCCAT Talk-associated special effects; it can be a very convenient partner in crime in gaming situations, particularly if you rely on macros. However, it trips up somewhat when it comes to Job #1. It’s not so fun to use in any usage scenario other than hardcore gaming. That’s a shame, given its MSRP of $99.99. That’s in the vicinity of the price point of many a popular mechanical keyboard.

At the end of the day, the Isku FX leaves me wanting more. Sure, it’s got features in excess, and there will be people who will buy it to take advantage of all that the Isku FX can do in a gaming scenario. But I’ll always wish that it could do its primary job a bit better.