Everyone that’s a PC enthusiast will surely be familiar with the name SilverStone. They make an impressive line of cases and sell an equally impressive line of accessories and power supplies. Today we’re taking a look at the Temjin TJ10, the latest and greatest case in SilverStone’s class leading Temjin line of full tower cases.

Let’s take a quick look at their listed specs: 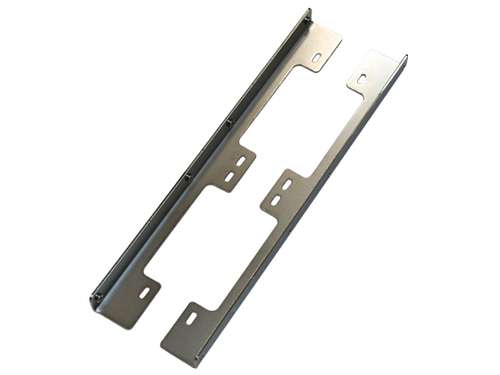 They’ve even come out with their own radiator mount that’s suspiciously similar to one that I created for the TJ09 I reviewed a while back. They say that imitation is the sincerest form of flattery so I’m not bothered by it, I just hope that this review gives them a few ideas because we’re not putting a mere dual 120 rad into the TJ10, we’re going all out! 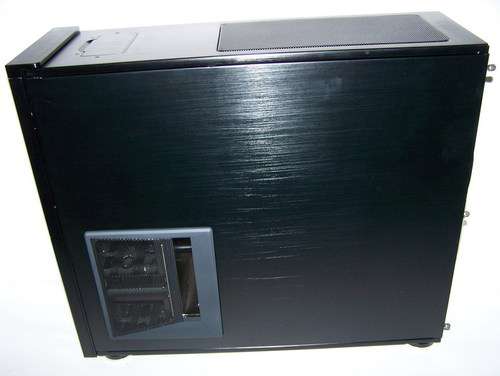 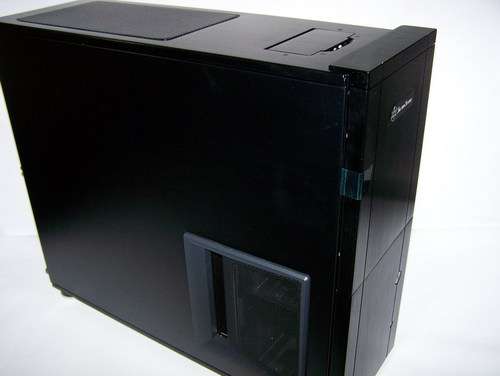 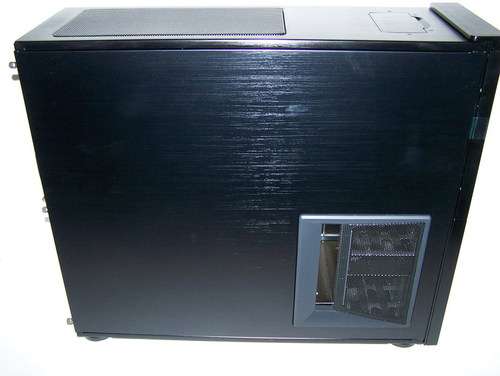 The TJ10’s lineage is apparent upon first glance. It’s basically a TJ09 with a revamped front so that there’s a door. When she arrives the door hinges on the right which is sort of unfortunate for people with their PC to their left. We’ll look into that in more detail in a bit. 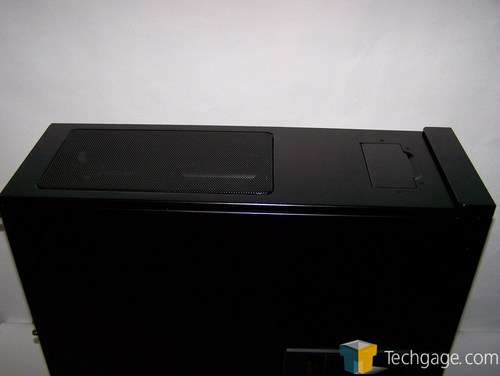 The roof of the TJ10 has the same mesh grill in the rear and expansion ports in the front as the TJ09. I detailed the expansion ports in greater detail in the TJ09 review so I won’t go over them again other than to list them here: 2 X USB 2.0, 1 X Firewire and Audio out, MIC in. The door to the front hides them when not in use. 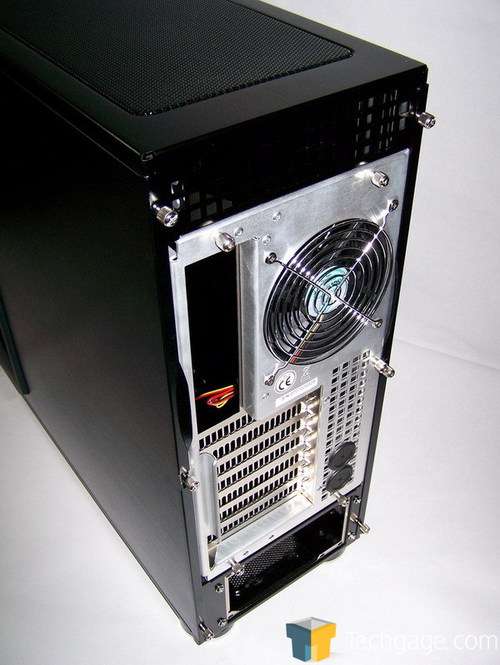 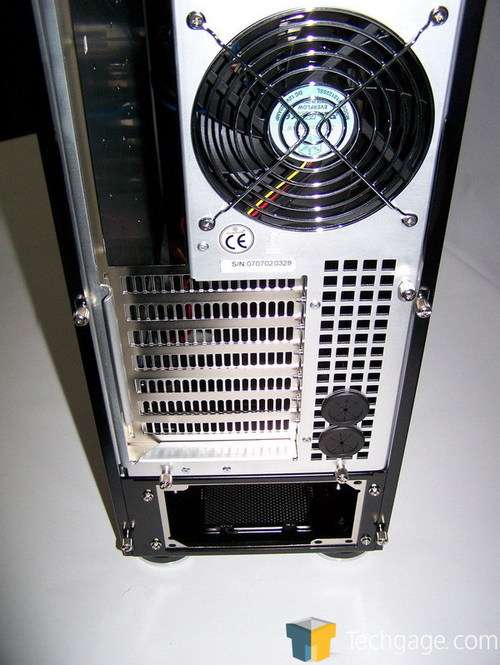 The rear of the case has remained largely unchanged. It received new PCI slot covers with added venting and the holes for external plumbing were enlarged and treated to perforated rubber grommets. Other than those changes the rear of the removable motherboard tray is the same as the TJ09 it’s based off of.. I’d still like to see the curved handle to the left of the PCI slot covers moved (re-arched or removed entirely) because it gets in the way of the inner DVI connectors on certain video cards (namely mine!). 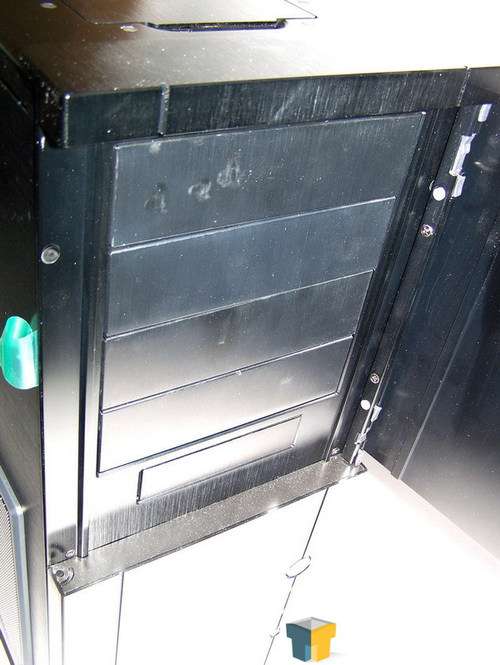 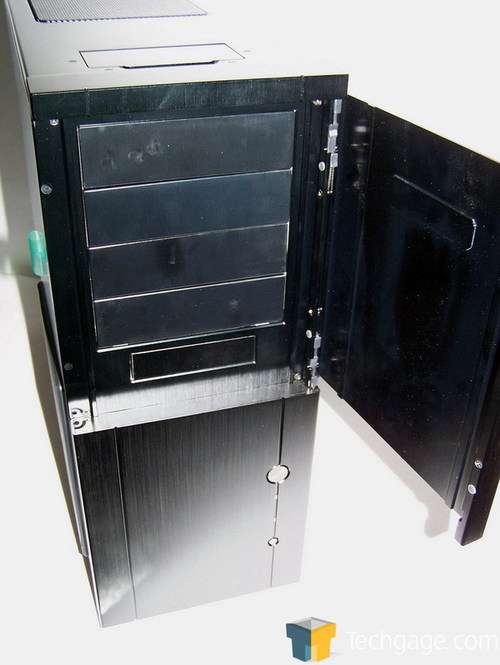 I don’t know why the case looks so washed out other than the reflective anodizing playing havoc with the flash on my camera. In person it’s black, everything matches nicely. Looking at the door we see that it looks like the hinges are releasable. Good sign even if it means that you can just get the door out of your way. 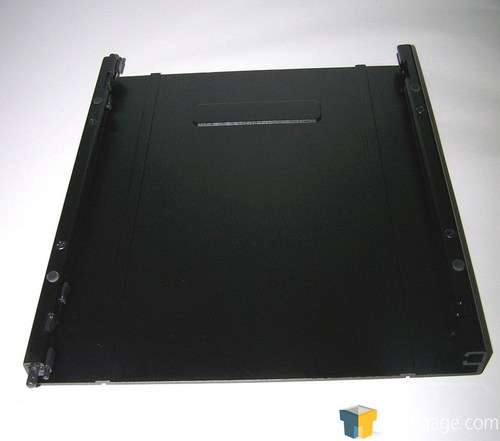 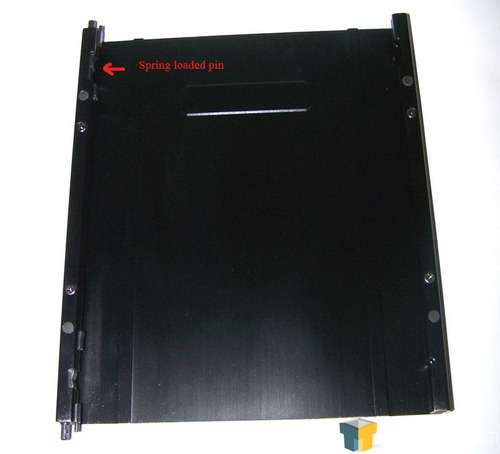 A closer look at the door shows that the hinges can indeed be moved from side to side. It also shows that there are small pins that limit the door from over extending which would cause the door to scrape the case front which could royally screw up the anodizing. The upper hinge pin is spring loaded as I’ve handily pointed out. Of course this is all for naught if the case doesn’t have points for the hinges to fit into. 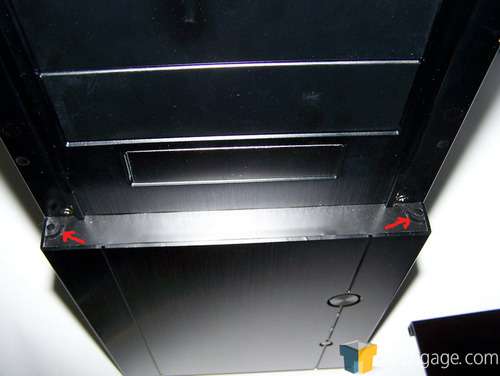 And it does! There’s a mirror set in the top of the case front. 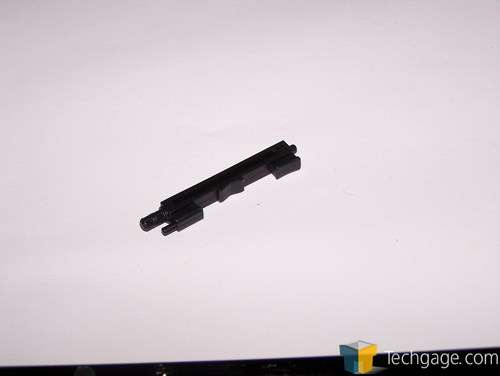 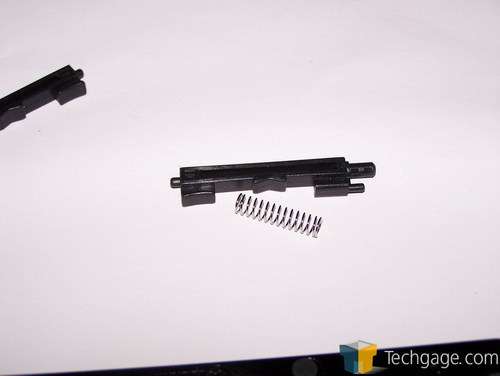 Pushing in on the raised bit in the center allows you to pop the hinges free. The spring loaded hinge pin is identical to the non-sprung pin. 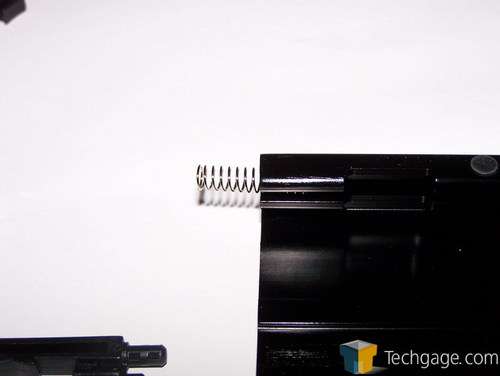 This means you just slap the spring into the door on the other side, pop the hinge pin in and put the fixed pin in place and relocate the door. 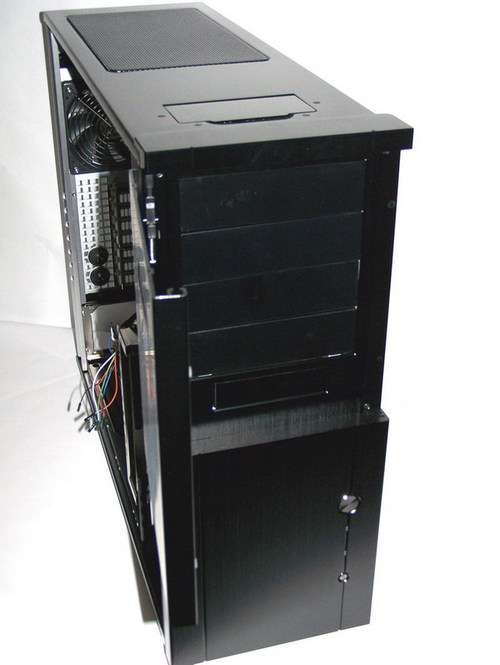 Voila’, the door now hinges to the left!