Back in December, in our Roku XD review, I stated my intention to give up cable television entirely. After spending time to think it over, and at end of the Colt’s season, I decided that it was time to call and cancel my subscription.

To supplement my entertainment needs, I have leaned heavily on Hulu and Netflix with both being valuable in their own right. As more and more devices offer the streaming of these two major services, it’s taking more and more to set each product apart.

In our Roku review, we enjoyed the smooth and responsive interface, and applications like the before mentioned Hulu and Netflix behave like they were designed for the device. If I had to come away with something negative, it would be the lack of any DLNA support. That being said, it’s clear that the Roku was never designed, as it currently is, to be a local media streamer. While the team in Saratoga, California might do more with the platform in future versions, its bread and butter is still the same as it always has been: Netflix. 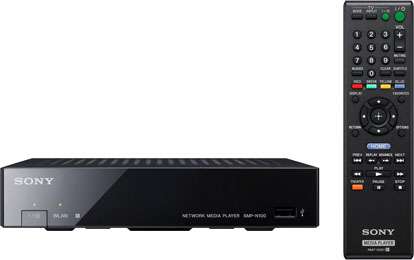 As the market becomes increasingly diluted with media devices of all sorts, companies are forced to come up with something that differentiates themselves from the rest of the offerings. The better known brands like Roku, Google and Apple have name recognition while smaller brands are often able to step out of the mold and offer unique capabilities like expanded file type support unique channels and applications.

Today we are looking at the Sony SMP-N100. It’s not exactly something that rolls off the tongue, but however unattractive the name might be, on paper the SMP-N100 is an attractive alternative to its better known cousins.

Capable of outputting 1080p, the SMP-N100 allows you to playback your own content wirelessly over your home network or locally via an attached user provided USB device. For me, the holy grail of media streaming devices is the ability to playback .mkv files. Luckily for those looking for that particular kind of support, the SMP-N100 can happily playback just such a file but with a small caveat. There is always a but… err, but more on this later.

Sony has always excelled in areas of design. You can say what you want about the company as a whole but more often than not, its products look good. The SMP-N100 continues this trend but with simple lines and blend in attitude. The owner of a larger footprint, the SMP-N100 is bigger than most other devices on the market, yet still small enough that finding a spot for it in your entertainment center shouldn’t be much of a chore at all.

With a power button on its front, the only other distinguishable feature on the device is a USB 2.0 port on the right side of its face. I have constructed a love-hate relationship with the USB port over my time with the device as it really takes away from the overall look of the unit. That being said, it makes attaching a thumb stick with whatever media you want to watch very convenient. If you are looking to hook up an external hard drive, you have to deal with a cable coming out of the front of your unit and that’s an eye sore that could have been avoided with the addition of another USB port on the side or back of the device. 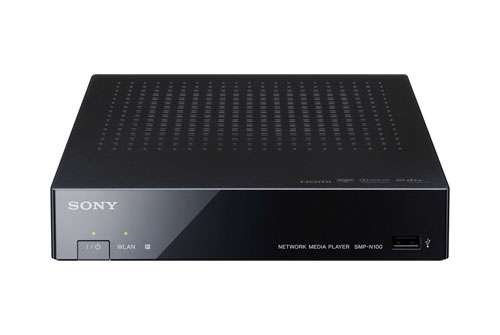 Lacking a cooling fan, the SMP-N100 is a completely silent device, unlike the well-liked AC Ryan Playon!HD that Brett took a look at last November. To aid in cooling, there is a grid of holes on the top of the unit, allowing warmer air to leave the interior of the case and safely move on to areas unknown. While certainly a boon for those that hate the collection of dust, they add to the overall look of the streamer.

Offering standard multimedia connections, the SMP-N100 includes a collection of the most used hook ups. From left to right we have a 10/100 Ethernet port, composite and component connectors, HDMI, optical digital out audio and a power connection. While many would like to see a gigabit Ethernet port, nobody is going to saturate a base 100 line with media they are streaming across their network. I have no qualms with the omission of gigabit Ethernet. This device isn’t designed to serve, only consume, so the NIC is more than capable of handling as much way traffic as you can throw at it.

For those that care to bypass a wired network connection, wireless N is baked into the SMP-N100 and connections to your wireless network is a breeze once inside the interface.

The included remote should look familiar to most anyone who has ever touched a Sony product. It’s a pretty uneventful device but it should be mentioned that it’s comfortable in my hand and it has the responsiveness that I expect. Other than those two things, it’s just a remote. 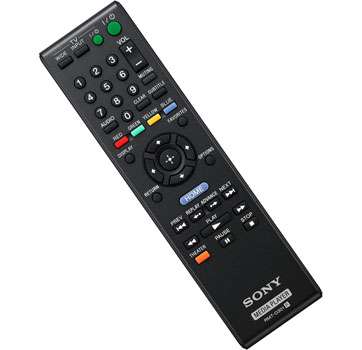