It seems that with each new advancement in hardware, the power requirements increase twice as fast… that power has to come from somewhere. Tagan sent us up the Silver Power 1000W to evaluate so thats what we did.

It wasn’t too long ago that any power supply above 700 watts was considered gross overkill. Then it got interesting. Over the past year, we have seen a marvelous family of video cards from NVIDIA and four core computing from both AMD and Intel come to light, even if AMD’s simply a knee jerk reaction to Core 2 Quad. While quite impressive, they each demand their fair share of power.

What was once considered an excess, is not quite common. To meet the demands of this new hardware, power supply companies are playing the game of seeing who can release the largest rated power supply to market. Think of it as the megahertz race of a few years back, only substitute watts for megahertzâ€¦ or something like that.

What I am sarcastically getting at is that we do not need that much power. This was best exemplified at Computex at the Cooler Master booth. Cooler Master was brilliantly showing off their Real Power Pro 1250W power supply running not one extremely high end machine, but TWO. If a single power supply can do this with a pair of machines that a majority of all users don’t run either because they don’t need it, or they can’t afford it, what kind of power do we need to run our systems?

One company that has been in the power supply game for a while now is Tagan. With a product lineup ranging from everyday OEM caliber power supplies all the way up to the monstrous 1100W top end power supply.

While we don’t have the 1100W on the bench today, we have the latest release from their subsidiary company Silver Power, the slightly less capable GuardianX SP-1000E 1000W power supply. With power supply in hand and a slew of different peripherals to at the very least attempt to tax the power supply, we intend to see how the SP-1000E holds up in our testing.

Last January, we stopped by the Tagan booth at CES. There, we spoke to one of the chief engineers behind Tagan’s products. To say the least, the gentleman not only knows what he is talking about, but was quite animated and very passionate about the technology. It was here that we also got our first look at Tagan’s absolutely superb PC case, the Black Pearl. Along with that case, Tagan sent us their latest power supply offering, the SP-1000W. It is said to be an affordable alternative to the higher wattage power supplies.

Coming to us in its retail packaging, the SP-1000W’s box doesn’t set any new precedent in the packaging department, with the name and some trippy colors on the front. Hey, at least it has a handle. 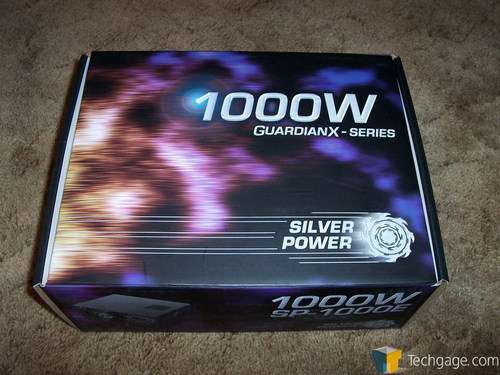 Flipping the box over on its back, there is a bit of information about the unit in not one language, but six. 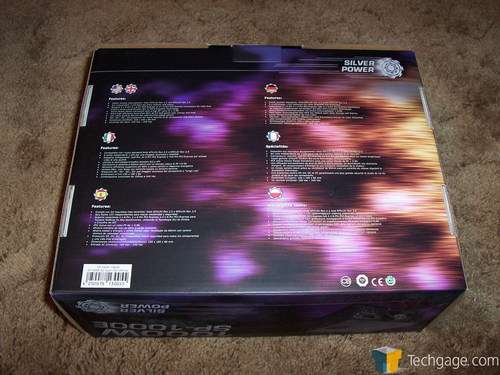 Once opened, Silver Power has chosen to package the power supply in a foam shell. This allows the unit to be shipped in relative safety and survive any minor bumps it might receive in transit. With foam walls separating the different components, we get our first look at the amazing amount of cables that come with the power supply. To aid in installation, Tagan includes a power cord, a manual and a set of screws. Pretty normal stuff, but appreciated none the less. 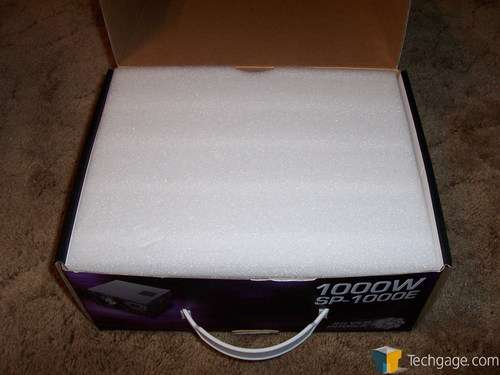 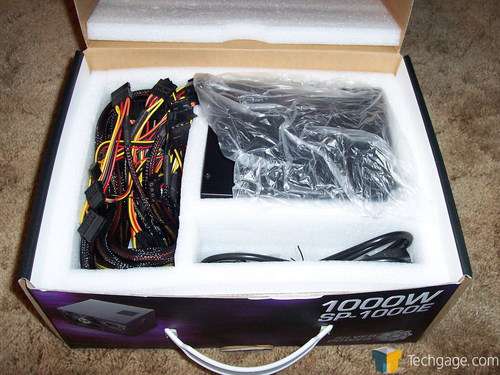 Once we have the power supply out of the box, we quickly see that the PSU is not modular. This isn’t a huge deal but it is something that makes installation and cable management a breeze. When they first started popping up, namely Ultra, they were a neat idea, but not one that I was ready to subscribe to. After working with a couple, including the Enermax Galaxy 850W and the Corsair 620W, I now have a strong appreciation of the ease of managing cables that a modular power supply brings with it once it’s purchased.