The first-ever NAS we took a look at was a dual-bay Thecus N2100. We are returning to those roots today by now taking a look at the single-bay N1200. We were pleased to see that Thecus once again delivered a well-built NAS that’s not only strudy, but packs in numerous useful features as well.

The testing procedure here at Techgage for networked hardware is pretty simple and straight forward. Starting with Sandra, we run the network bandwidth benchmark built into the popular suite of tests. While not entirely indicative of real world performance, it does give us a good idea of how one piece of hardware compares to another one. In this case, we are adding the N1200 to our list of tested NAS boxes. As we continue to grow in our reviews, more and more NAS devices will be added but for now, our charts consist of the Synology DS207+, the QNAP TS-109 Pro and the Thecus N1200.

Another test we have run in our past reviews as been a real world transfer test. In this, we are attempting to simulate actual scenarios that most any user will find themselves in at some point or another. We all have data that we transfer back and forth in one capacity or another in through our tests, we intend to give you an idea of how well each device will work in these situations.

The hardware uses in these tests consists of: 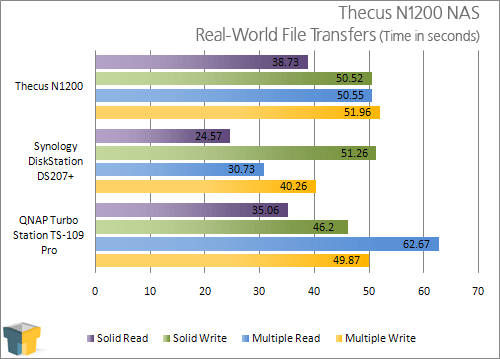 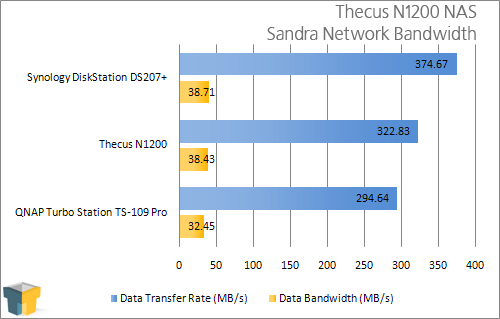 As we can see in our tests, the N1200 falls behind both the other NAS boxes is the real world tests but in Sandra, it holds its own. I am putting far more weight behind the real world transfers compared to those numbers given by Sandra in this case. Even though it fell behind the others in most of the tests, it did put up respectable numbers and when considering the price of each unit, the Thecus N1200 is easily the cheapest of the lot.

So how was our experience with the N1200? It was a good one to be perfectly honest. What it lacked in all out speed, it more than made up for in functionality. We must also keep in mind that the N1200 is not meant to be a high-end, high-performance NAS. It’s designed for those looking for a simple and convenient way to back up their critical data as well as serve media as they see fit.

With the option to expand the storage of the N1200 by adding a USB or eSATA drive speaks is a great example of the versatile storage that the N1200 brings to the table. For those that enjoy sharing photos with friends and family around the world, the N1200 can do this as well. With its ability to serve music thanks to its “mediabolic” DNLA certified server capability, the Thecus NAS proves again that it’s more than up to the task for day to day users. 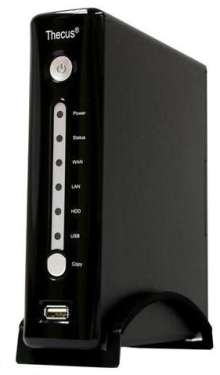 For those needing performance and looking for the convenience of active directory integration, you will have to look elsewhere. The overall feel of the user interface is somewhat clunky when compared to that of QNAP and the superb Synology DiskStation Manager 2.0 but it gets the job done.

The build quality of the N1200 is one of the best we have seen to date. The all metal housing screams sturdy and when compared to the plastic enclosures of Synology and even other Thecus devices, the N1200 takes top honors when manufacturing quality comes into the picture. The fan leaves little to be desired as our model was somewhat noisy. It never got to be distracting but in a quiet office, it might drive you up the wall with it’s higher than normal pitch. The LED lights are bright and the USB copy function works as well as other comparable devices.

All in all, I like the Thecus N1200 and would like to see features of it, like the all metal casing and integrated switch, in other devices. If the N2100 that we looked at last year was built of this same material, it would be an obvious choice for those looking for functionality on top of durability. With all this in mind, the Thecus N1200 earns an 8 out of 10.